It\'s not often an amateur gets to announce a new galaxy. But it appears I have discovered a previously unrecognized dwarf irregular galaxy probably on the edge of the Virgo Cluster some 60 million light-years distant. Considering how well studied this cluster is I never expected there\'d be an undiscovered galaxy in the cluster. I\'m posting this out of my normal order as some may still have a chance to get better data on it. My latitude makes that impossible for me. Here\'s the story of its discovery.

Since much of May had horrid skies I broke with tradition and decided to look at the images to see if they needed more data before they got too far west. Unfortunately, thanks to really bad weather here this field had already moved too far west and into trees before I looked at it. In looking at it I found an apparent reflection. The corrector of my SCT creates these all too often. I\'d have marked it to redo in a slightly different position to get rid of the reflection but it was too late for that. So I marked the file to note the reflection needed to be removed.

But there was something \"wrong\" with the reflection that nagged at me. I went back a few days ago for a second look. Reflections are smoother and usually have streaks through them. This one was mottled with no streaks. Thus I decided it might be real after all. I checked the position against every catalog in VizieR but came up nearly empty. Sloan reported two essentially point sources in this area but no extended object. I had previously checked the GALEX images for this area and came up empty. But looking at the Sloan image it showed what at first appeared could be stronger noise against otherwise normal level background noise. The two objects it noted didn\'t match a bright speck in the image but all fell between them. But it didn\'t appear to be noise. I decided it was real but not in any catalog I could access. A check of the POSS plates showed something very faint in the POSS II blue plate. I decided it had to be real. Time to call in my pros. Unfortunately, most were getting ready or had already left for the AAS conference running June 12 through the 16th. Those I could reach dismissed it as a reflection even though it was in Sloan and very faintly in the POSS II blue plate. I\'m sure they were too occupied with the conference to give me any time. What to do?

When this happens I fall back on Sakib Rasool who some of you know. He has lots of contacts. One is Igor Karachentsev a Russian astrophysicist who studies this area. Here is his reply when Sakib relayed my information to him: \"yes, this object is unknown as a possible dwarf galaxy, only known as SDSS source. It is also not detected as HI-source in the ALFALFA HI survey in Arecibo. Due to its texture, it may be a peripheric dIr member of the Virgo cluster.\" Later he wrote: \"sure, it is a real irregular dwarf galaxy of bluish color and low surface brightness, however, unseen in GALEX. Such kind objects may be gas-rich, as well as gas-poor.\" I should mention not being seen by ALFALFA HI means it is radio quiet, somewhat rare for a dwarf galaxy.

Igor had hoped to put the 6 meter scope on it but as usual, it was down for repairs so it didn\'t happen. If he tried again I never heard about it. He\'s about 78 years old so might have retired. An American astronomer was going to try and point Keck at it but a rare blizzard shut it down. I haven\'t heard from him since either.

Now for the regular part of the post about what I thought I was doing when I found the unknown galaxy.

HCG 59 is a group of 5 galaxies in about 2 degrees south of Denebola in Leo. 4 of the galaxies are about 200 million light-years distant but one is a bit over a billion light-years distant so obviously not a true member. Quite a few other galaxies are in the field that are at the 200 million light-year distance indicating the group is far larger than the subgroup that is HCG 59. Hickson groups have a very specific definition that is meant to rule out galaxy clusters. But ignores if they are actually related. Thus this group includes one that obviously isn\'t and excludes one that seems to be worthy of including that is the right distance but is too low of surface brightness to qualify. For more on the specifics see Hickson\'s paper at: http://articles.adsabs.harvard.edu/full/1982ApJ...255..382H/0000382.000.html

HCG 59C is the largest of the 4 truly related galaxies though being somewhat edge on appears smaller than 59A. It is only a bit over 50,000 light-years across. Less than half the size of 59E thanks to the latter\'s much greater distance. 59A appears to be a rather red and dead, or at least near dead spiral. By redshift, the closest member of the group is 59D which is a really neat irregular galaxy full of star clouds. Its redshift puts it at 180 million light-years distant. Enough difference from 59C\'s 220 million light-year distance they may not be related at all, just a line of sight group. An HST image of this galaxy is at: https://upload.wikimedia.org/wikipedia/commons/6/6b/Hickson_Compact_Group_59.jpg

Four asteroids are in the image. They are moving very slowly as they are at the point in their orbits where they are changing from between retrograde and prograde motion. In fact, two are prograde (p) and two are retrograde (r). I\'ve caught asteroids near this point before but not with some on either side. Because they are moving so slowly all but one looks at first glance (maybe second as well) to be just a very distant, near starlike galaxy. To be sure I checked each against the Sloan images to verify nothing was there when Sloan took the field. Besides the positions matched those given by the Minor Planet Center\'s Minor Planet Checker. The night was poor (most are of late), I doubt I\'d have picked these up if they were moving normal speed across the sky given the poor conditions.

The previously unknown galaxy is circled in dark green in the annotated image, to the upper right of HCG 59. I\'ve stretched the heck out of this one to bring out the probably dwarf. That makes for some nasty stuff around bright stars that under a normal stretch wouldn\'t be seen. I further stretched the galaxy itself in the enhanced cropped image. Some of what you see is likely noise. I need a much longer exposure time than I gave it not knowing of its existence.

Pretty pictures are nice but finding something previously unknown is MUCH nicer. 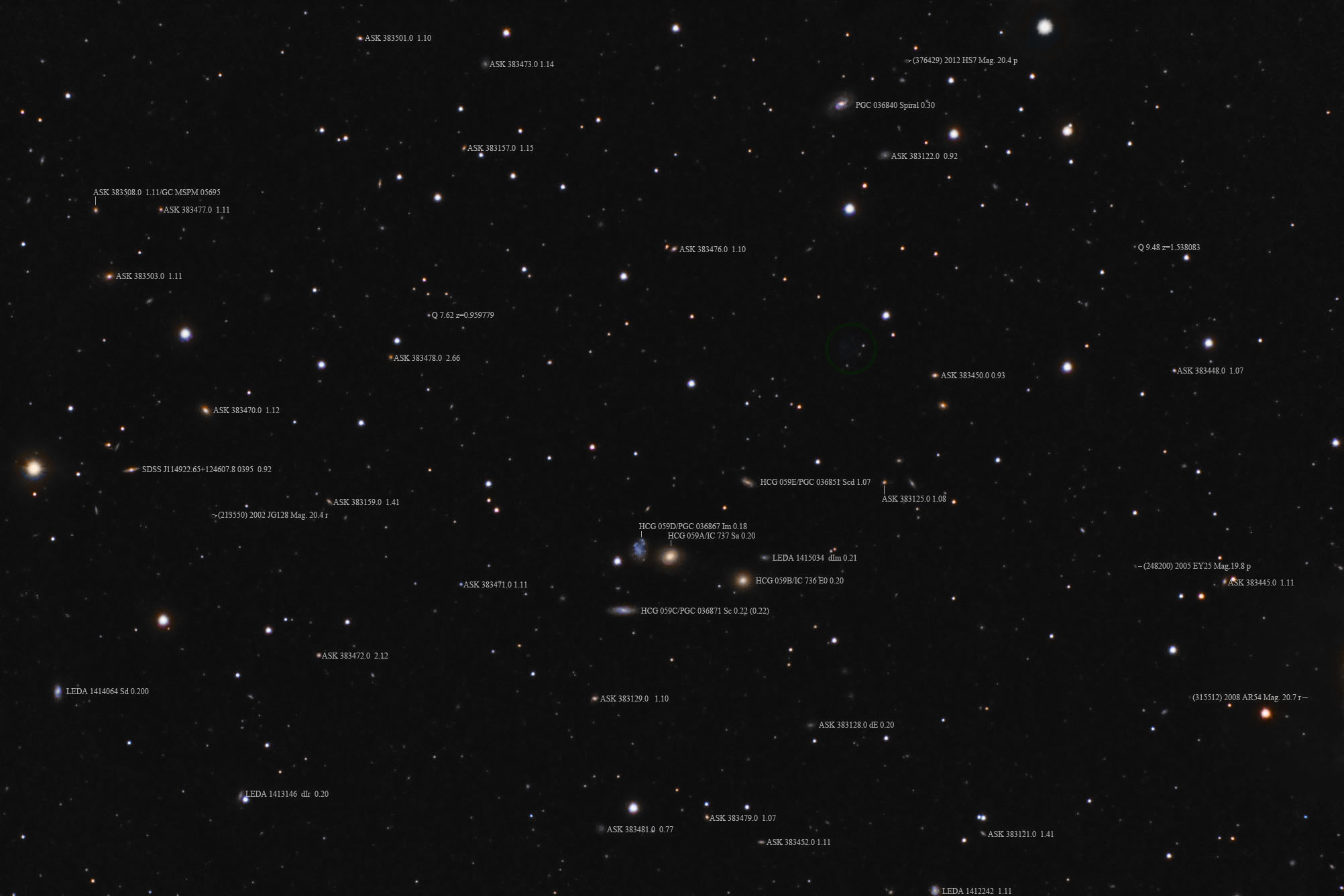 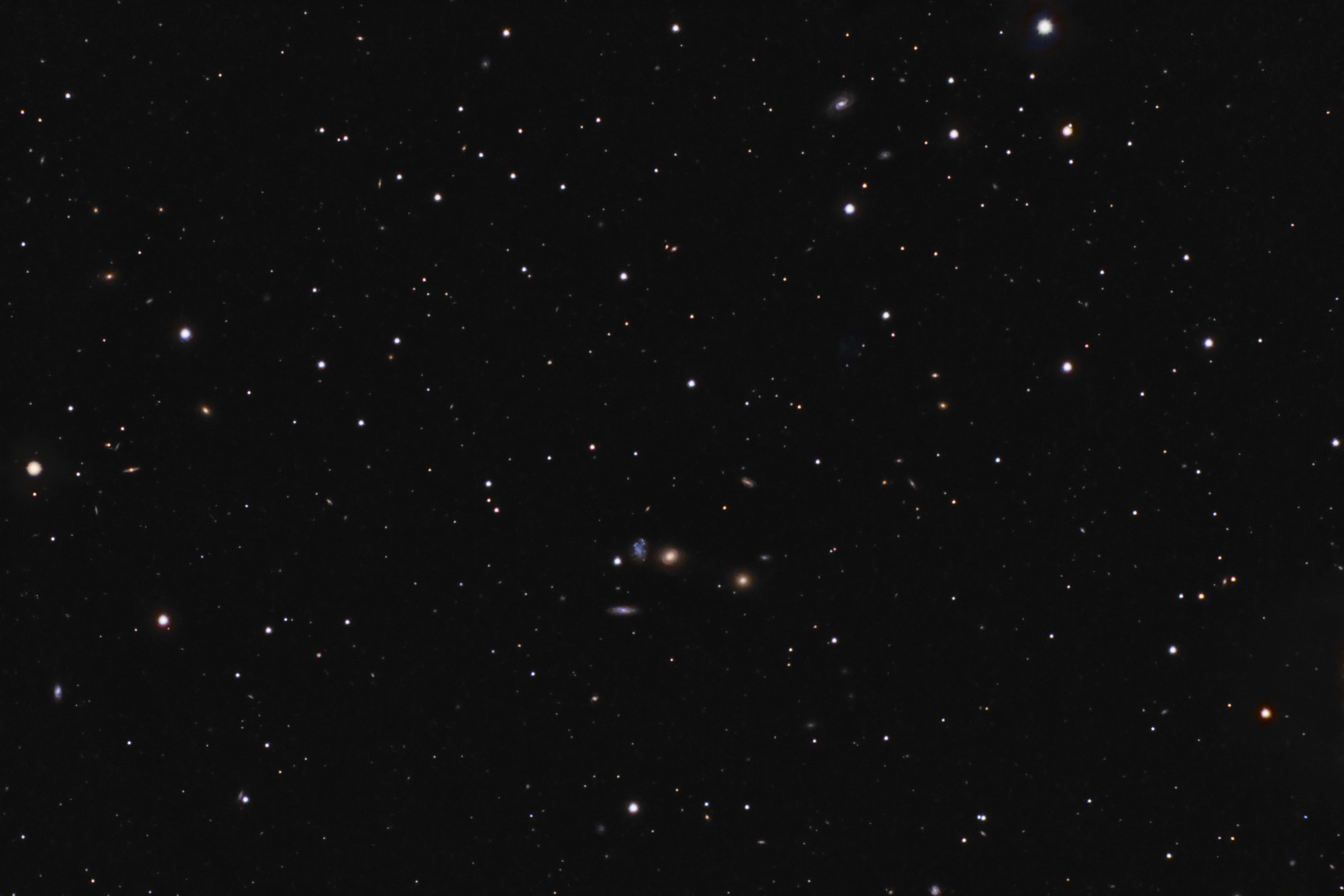 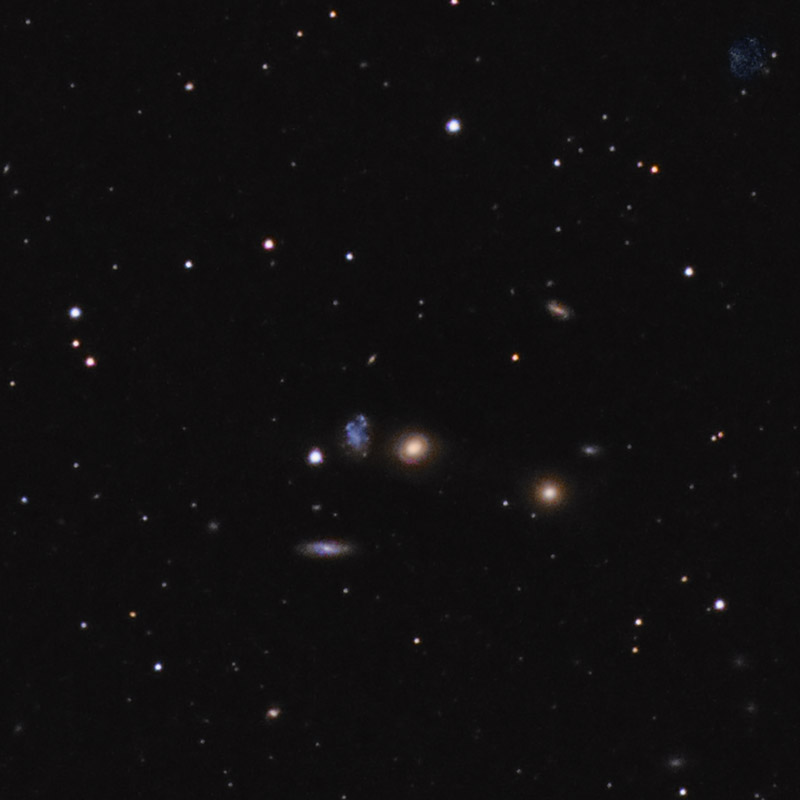