HCG 64 is a 4 galaxy group in Virgo about 5 degrees north of the ecliptic. This explains the 9 asteroids that poked their noses into the image. The three close galaxies are interacting. They are at a half billion light-years. The fourth member to the north, like the asteroids, has no connection to the other three. At the time Hickson defined is compact groups distances were mostly unknown. Like Arp\'s Atlas of Peculiar Galaxies with duos and trios did the same. In both cases sometimes the apparent closeness is just due to a similar line of sight. The three main galaxies in this group are obviously related. The fourth met his criteria so was included. He likely doubted it really belonged. One clue is that under the accuracy of magnitudes is on a scale of 1 to 4 but this one is listed as 5 for which there\'s no explanation.

I measure the plume that runs below HCG 64A at 192 thousand light-years. That\'s not counting the part to the southeast until it turns to the northeast. Including the galaxy and its plumes to the northwest and southeast gives the stars spread along a path 344,900 light-years long. I\'ve never seen anything like this before. But the lower plume may not come from HCG 64. The \"star\" at the southeast end is a small galaxy, 2MASX J13254599-0352198. Unfortunately, there\'s no redshift data for it. Could it be part of HCG64 but too faint to make Hickson\'s requirements? If so all that\'s left of it is the plume and its core. I found absolutely nothing on this. Seems all too often I start with a simple interesting field and end up with unanswered questions.

Transparency was very poor for this image. Several other asteroids I\'d normally have easily recorded didn\'t get through the gunk and less than average seeing. In looking through the asteroids in the image I found one that surprised me. I\'d taken this image while an NEO was passing by. In fact, it was discovered only a day or two before the image was taken on April 8. It is 2018 GC5 at magnitude 20.4. Most asteroids in the image were moving about 30s of arc per hour. But the NEO was moving at ten times the speed of typical asteroids. Even with the lousy conditions, I could have picked it up if I\'d known it was there, by tracking the asteroid rather than the stars. No distant galaxies were picked up as I normally do. Not necessarily because of conditions though I\'m sure that had a bit to do with it. But the catalogs carrying these distant galaxies don\'t cover this part of the sky. Being in Virgo I found this surprising. Even with the poor transparency, I was able to easily pick out every galaxy NED had redshift values. None as dim as magnitude 20 let alone 23 that I often find. Still, on a better night how much more of the plume around HCG 064 would I pick up? 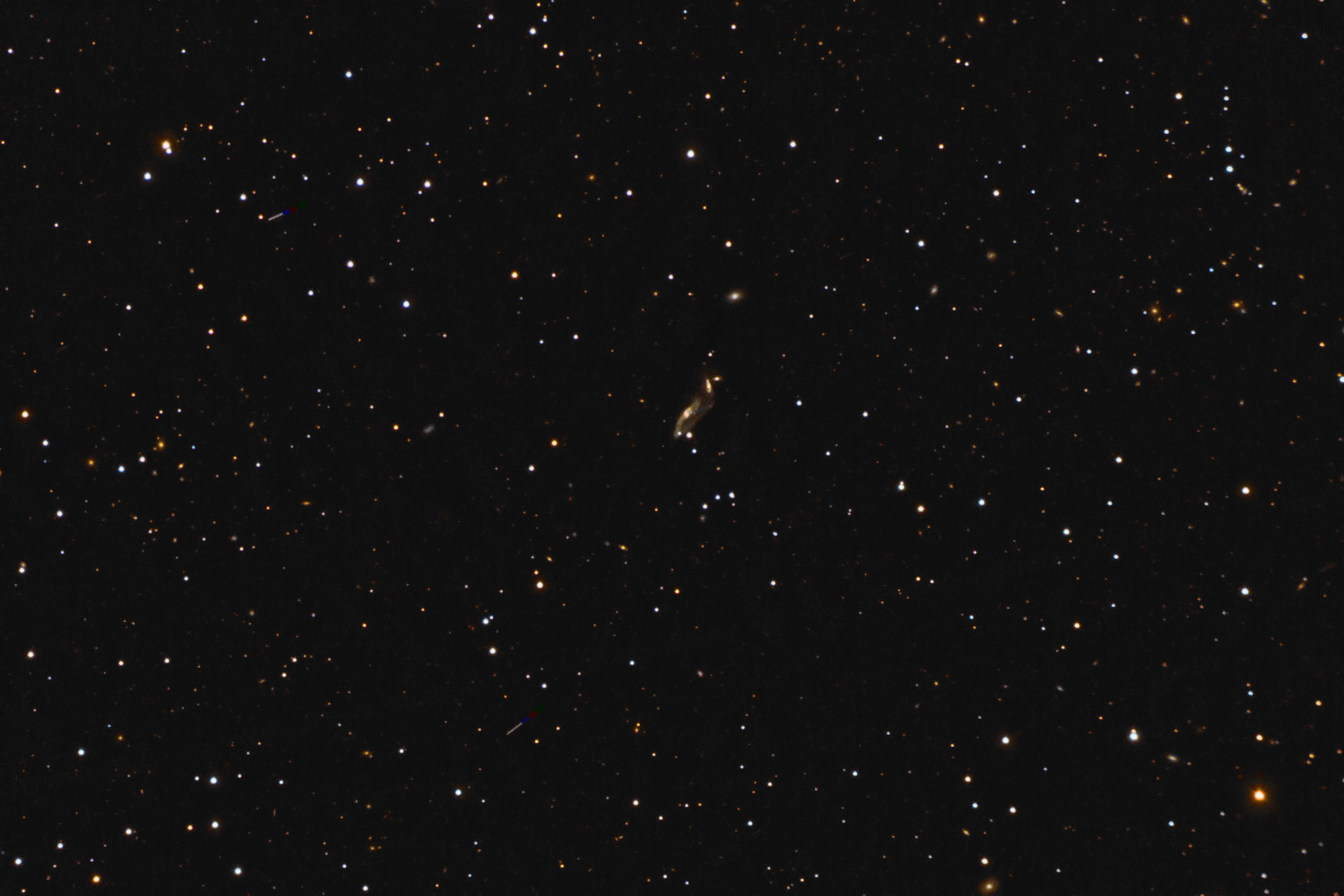 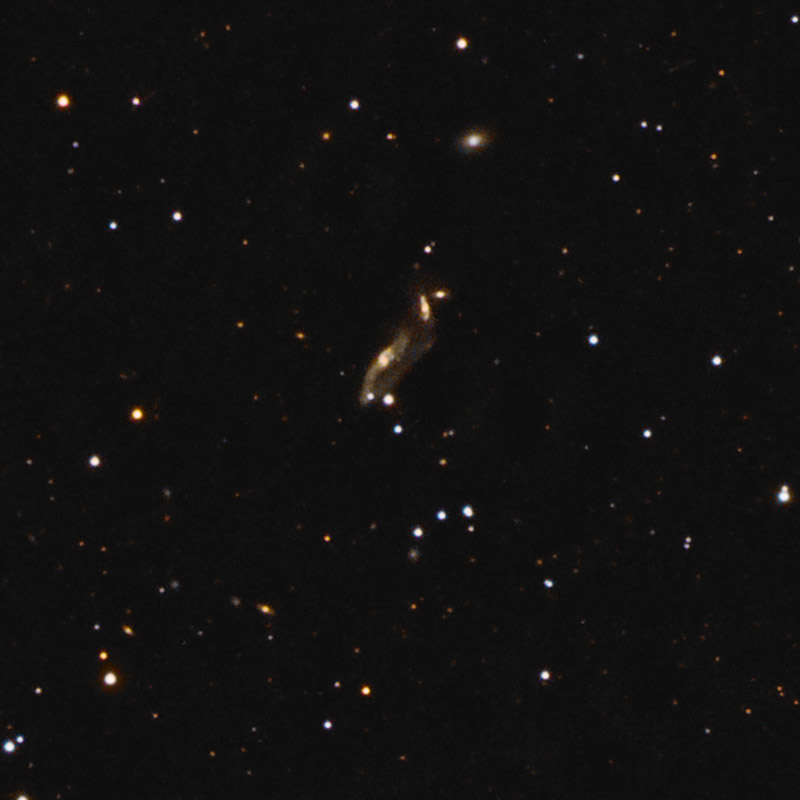 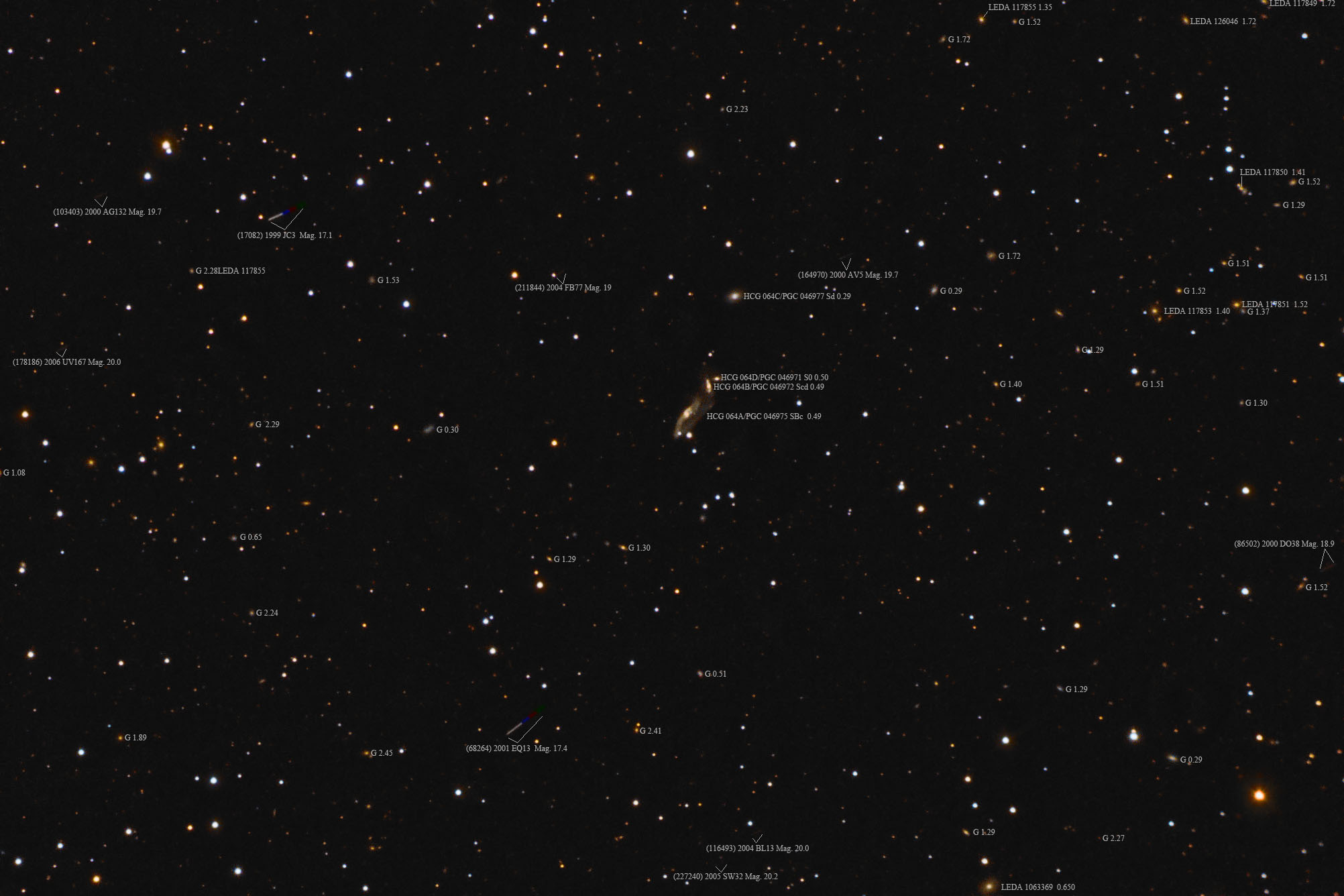