Hickson 68 is a galaxy group far larger than apparently Hickson realized. He made the catalog from visual inspection of the Palomar Observatory Survey Plates of the 1950\'s creating a catalog known as the Hickson Compact Group catalog. Well HCG 68 is not compact. He apparently was only considering the core region. The group is really far larger than my image. It is organized with elliptical galaxies in the center and spiral galaxies mostly on the edges many of which are beyond my FOV. The large spiral NGC 5390 is an example as is UGC 8841 in the lower left corner of my image. The group is located about 115 million light-years away in the constellation of Canes Venatici.

The center is home to the overlapping galaxies NGC 5353 and NGC 5354 which inhabit a common halo. NGC 5353 is an S0 galaxy rather than elliptical that harbors a rather active AGN indicating this might not be a serene old group like it first appears. NGC 5354 to its north is Classes SA0 with strong spectral lines and is a LINER galaxy. Yet more indication this is an active group still in its formative stage. Then there\'s NGC 5350 a rather classic looking barred spiral. NED classes it SB(r)b while the NGC project says SBb-c. It is a starburst galaxy with intense star formation going on in its core that is hidden from our view by warm dust. Yet another indication of activity.

Other NGC members of the group include NGC 5355, an E3 galaxy by NED and S0? by the NGC Project. NGC 5358 is classed SO/a by both. The other large member of the group in my image is UGC 08841 which is a very nice two armed barred spiral classed by NED as SBb.

NGC 5353 and NGC 5354 appear to share a common halo. It has a very weird sharp cut off at its southern end and appears slightly brighter right before it comes to that sudden end. This is often seen when a dark nebula abuts a bright nebula forming a shock front. I scoured the literature but found nothing addressing this odd feature. Closest I came was an article talking about how this is a still collapsing system with lots of activity to come over the next billion years. http://iopscience.iop.org/1538-3881/135/4/1488/pdf/aj_135_4_1488.pdf

This image is a complete reprocess from the very beginning of data taken back in 2008. When I processed it I included both color and luminance frames taken though clouds which cast a strong gradient across the image, While it was removed much of the halo, including the sharply defined southern end were gone. I through out all these frames and ended up with a much better image that now shows the halo\'s sudden southern end. Since the color data is weak I am a bit leery of it in faint regions like this halo. If it is right (a very big IF) then the plume has an odd red color as it comes to a halt. This is very weird if true. Is it really gas and dust ejected from the two massive S0 galaxies rather than stars? When galaxies of this size interact most dust and gas is ejected. Is that the source of the southern plume? I\'m likely far off base here but what the heck, wild speculation is fun. If anyone finds anything to cut though my wild guesses please let me know and I\'ll pass it on.

This image was taken with my old, halo prone filters. The bright K5 star really made a mess with my old filters. I left a lot of it in as I found no way to take it out without harming the faint halo around the core galaxies. But compared to the Sloan image of this area I did a much better job with it than they did. I need to reshoot this with more time with the new filters that don\'t have the halo issue.

The image was taken over 4 nights (one night, while used in the first image was rejected for this one). Many other frames from the other three nights were rejected as well. The result was I am down to my normal 40 minutes of L and 20 for each color. Not what is needed for such a faint feature as the plume, unfortunately. Nor was the night very good. My limiting magnitude is about 21.8 compared to my normal 22.5. That would indicate poor transparency even for the three nights I got usable data. Yet another reason to reshoot it. For now, this reprocess is a great improvement over the original so I\'ll go with it.

I retook this along with NGC 5371 omitted from this framing. See it for a better image. Unfortunately, it missed the plume. 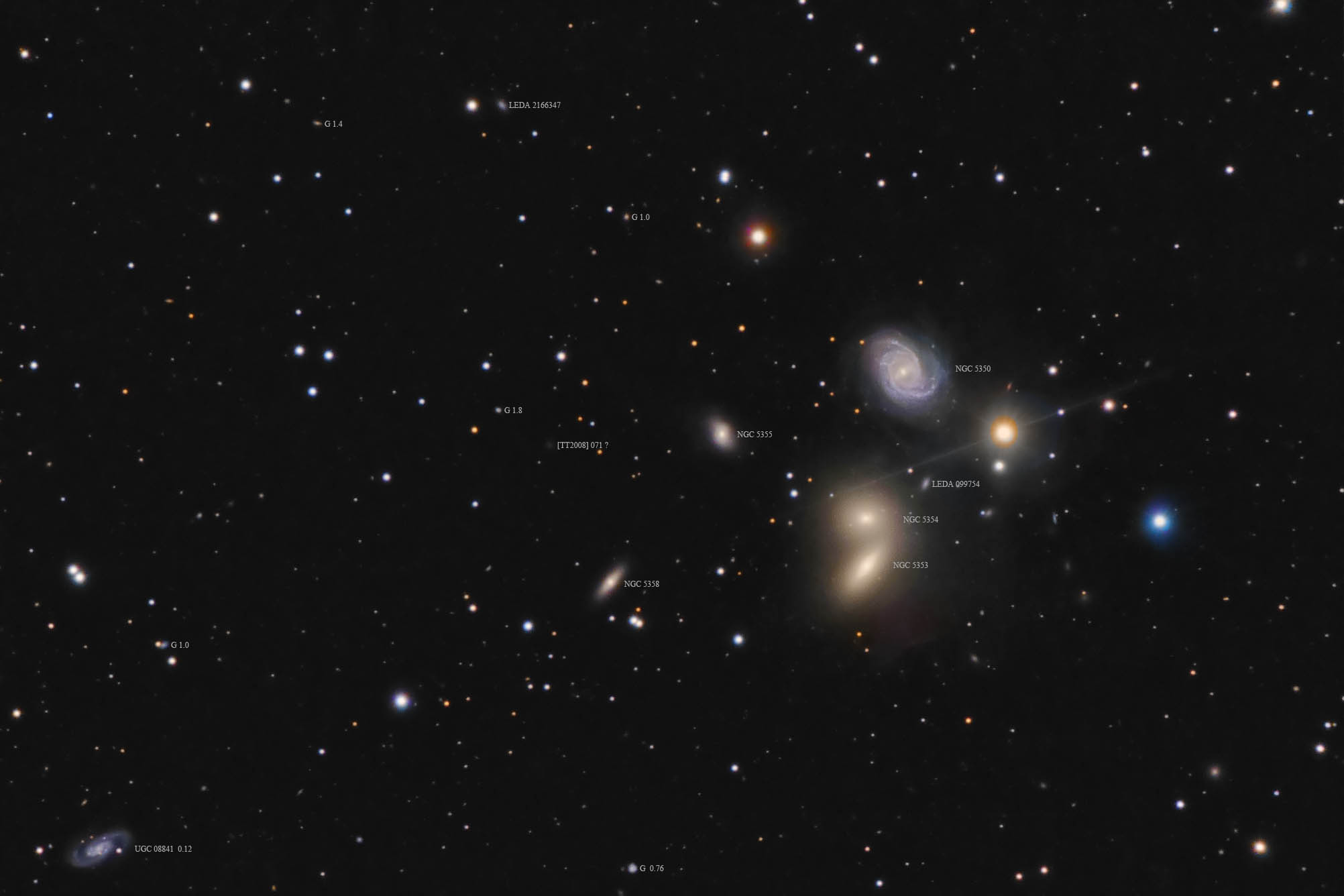 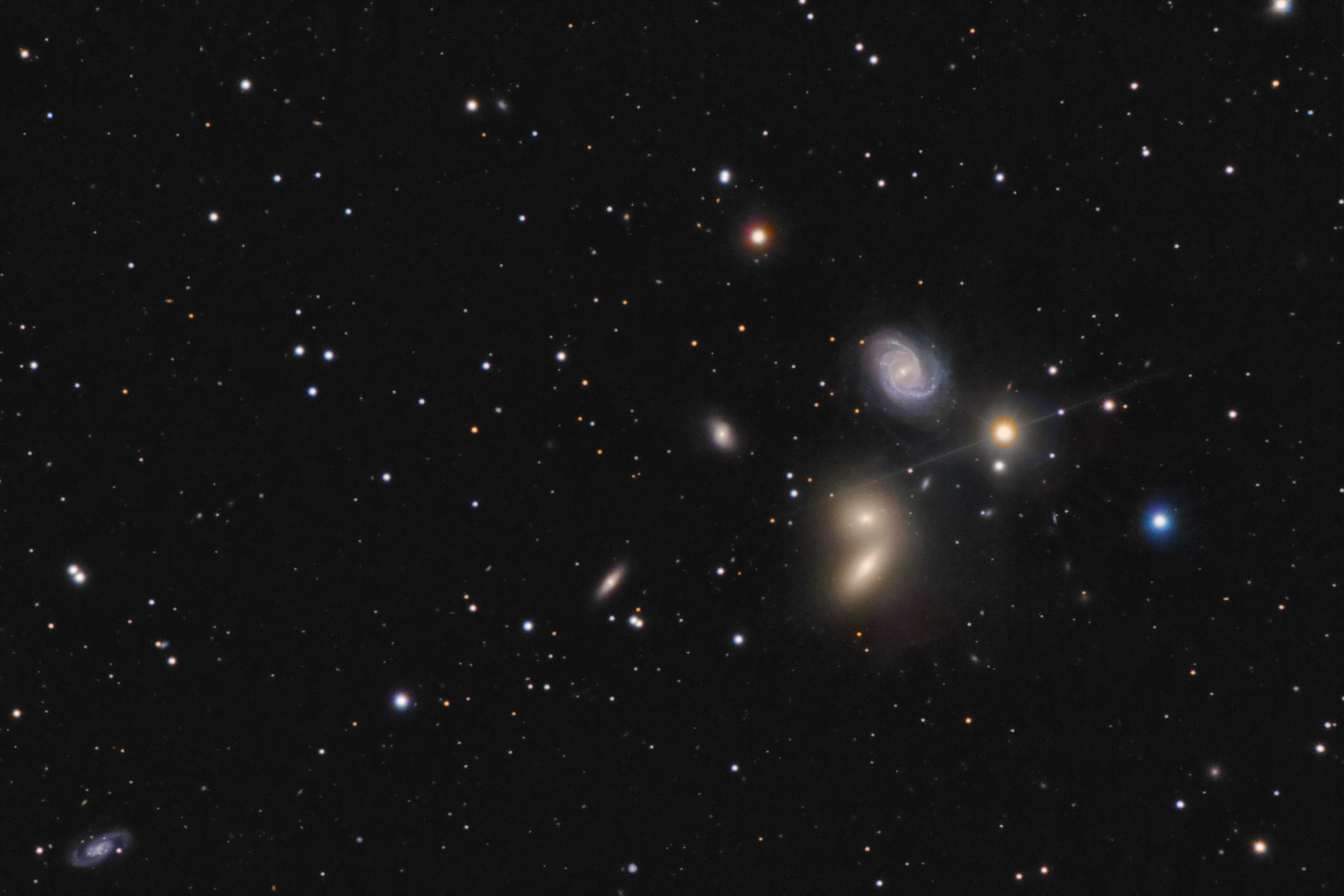