HCG 70 is a group of 7 galaxies in southeastern Canes Venatici. 3 of the galaxies are about 380 million light-years distant and 4 are about 850 million light-years distant so are really members of two groups. Hickson ignored distances when making up his list of compact groups. It was purely based on the visual impression much like Arp\'s galaxies were classified by visual impression rather than what was really going on. In both cases there just wasn\'t enough information at the time to take it any further. As for HCG 70, the two groups are made up of many more galaxies scattered around my image. Just that they were too faint or far from the center to be included in Hickson\'s group. There seems to be yet another group at about 700 million light-years in the field as well though I found no designation for any of these groups.

Only three of the galaxies in the Hickson group carries an IC number with none being in the NGC. The IC galaxies are IC 4369, 70 and 71. All three were discovered by Stephane Javelle on July 3, 1896. Oddly the most obvious member, UGC 8990 was not seen nor the other three in the group. Apparently, UGC 8990 isn\'t as visually obvious as my image makes it out to be. Though Seligman notes that it was seen as a 14th magnitude star. At least Javelle mentions such a star near to IC 4370 without mentioning the direction or distance. The galaxy\'s core reads 14th magnitude on my image with nothing else qualifying it seems he saw the galaxy but didn\'t recognize it. Many stars found their way into the NGC and IC, in this case, a galaxy may have been omitted because it was thought to be a star. I wonder how many others like this were missed.

Some of the field galaxies that caught my eye are ASK 539170.0 at 780 million light-years to the southeast. Is it a rapidly moving member of the group at 850 million light-years, a slow one in the 700 million light-years group or neither? It has an odd red region on its west side I thought was noise but it shows in the SLOAN image as well along with the dark band further to the west. Those are real features not noise or due to bad processing as I first suspected.

Another that caught my eye is PGC 050150 which is listed as a compact galaxy though to my eye it is a rather normal spiral. Further west is ASK 539107 a rather kidney shaped galaxy due to its disk being mostly east of the core and arms.

But strangest of all is ASK 539102.0 to the far southwestern corner. It has two huge sprays to either side of its core. It almost appears as two objects the core and the arc. It is part of the group in the Hickson group at the larger distance.

Quite a few rather bright galaxies have no redshift values at NED so aren\'t noted in the annotated image. CQ denotes a candidate quasar. NED lists it first as just a star which usually means it isn\'t all that certain it qualifies as a quasar. In this case, there is a spectroscopic redshift that seems to pretty much say it is a quasar. There may be some reason to question its value they don\'t mention. If the redshift is correct it would likely seem to be a quasar as what else is that bright at over 11 billion light-years?

This night was awful due to clouds. My system caught that one of the luminance images was unusable and took a fifth to make up for that bad one. When I went to process it I found yet another bad one I couldn\'t include without hurting the image the system failed to retake. Both were similar and I still don\'t know why it never retook it. If it was because it had moved beyond my 2 hour limit from the meridian it would have rescheduled it but that didn\'t happen either. So this image is, even more, data starved than normal which is sad as there are several faint features to these galaxies that would have benefited from even more time than I tried to take. Conditions for the color data continued down hill. I tried to make a pseudo luminance using the color data but that just drug the image down further. So it is yet another for the reshoot list for next year. 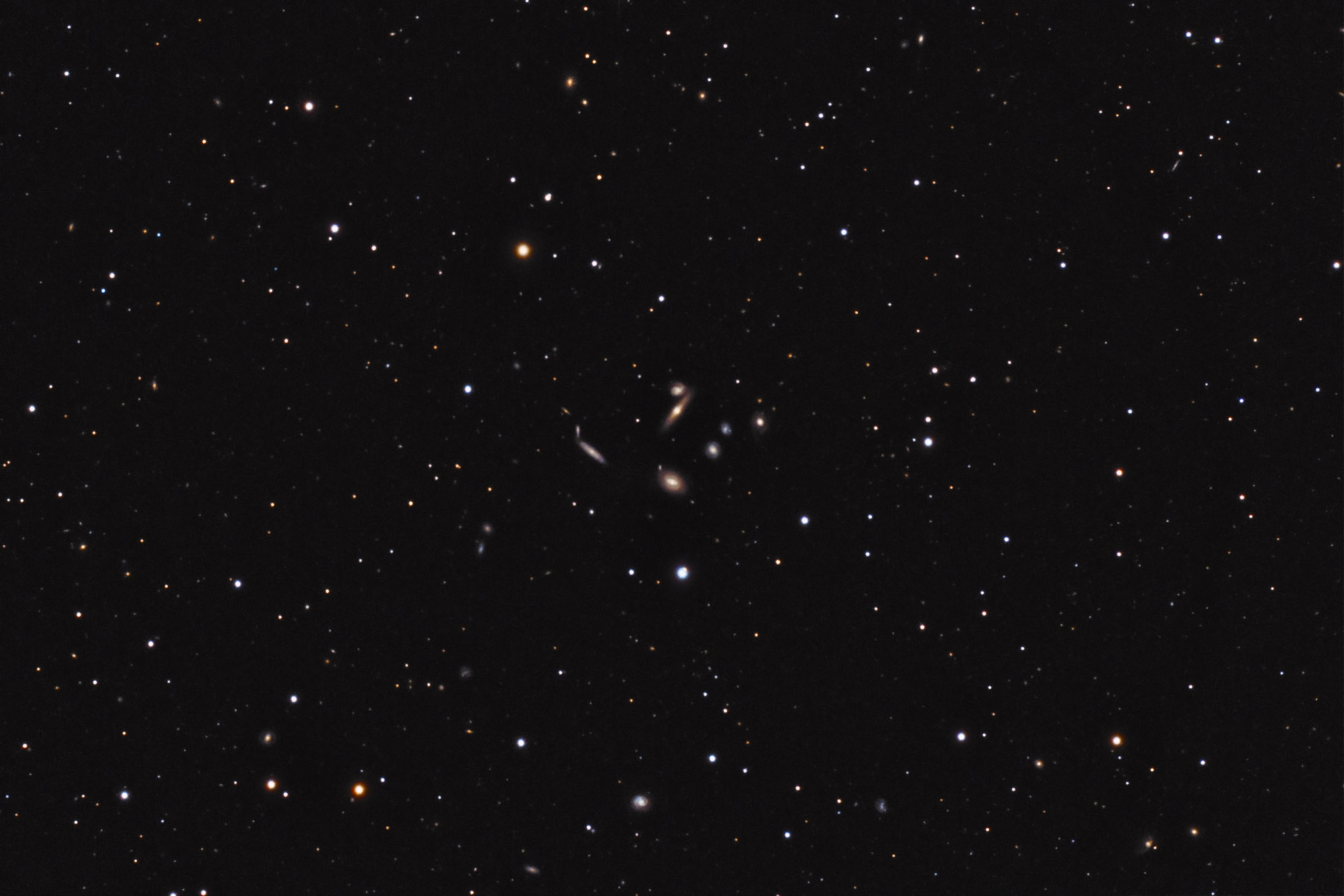 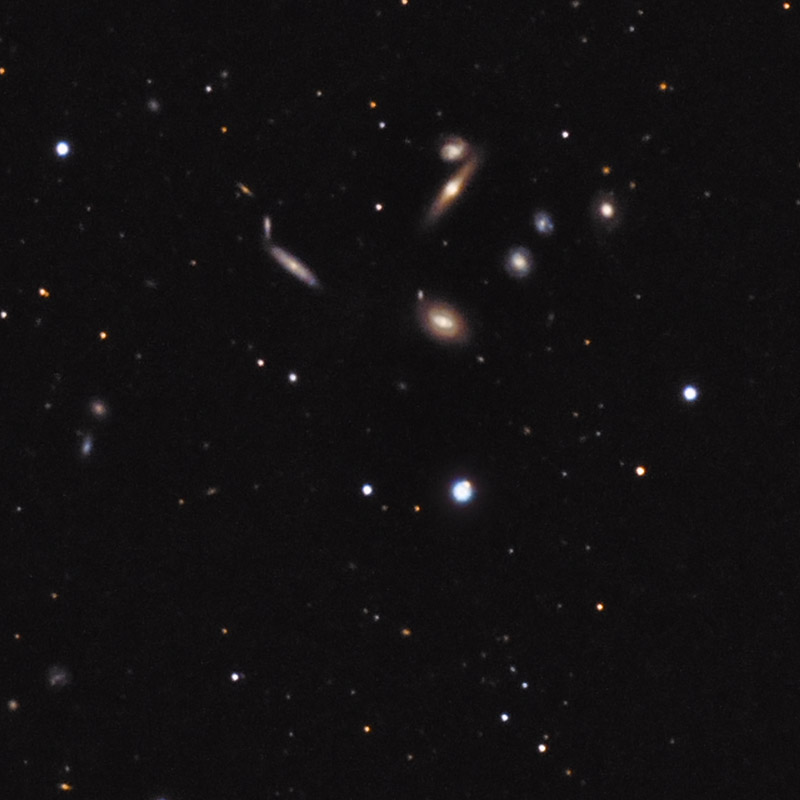 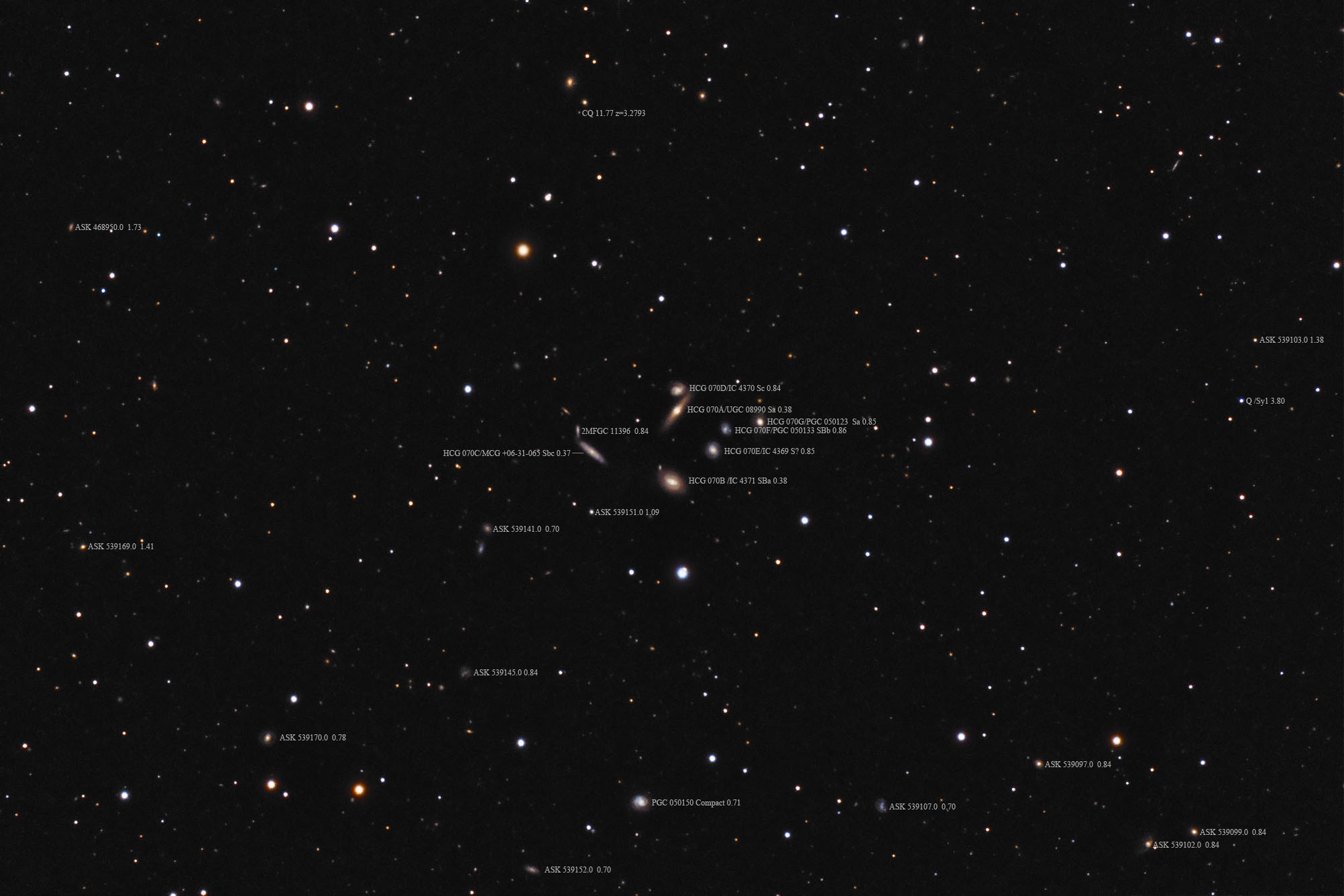