HCG 75 is a tight group of 8 galaxies in northwestern Serpens Caput about 550 to 590 million light years distant. One has no distance estimate. Are they really at the same distance or is this just an illusion due to our perspective? I found no non-redshift distance estimates to help here. It is rather likely they are at about the same distance and the difference in redshift values is due to their relative motion around a common center of gravity. Assuming they are about the same distance the group is a bit over 400,000 light-years across. Close enough that I\'d expect to see some rather noticeable interaction. While A and B overlap I don\'t really see any interaction and the others show none other than H is an irregular blue galaxy but this may just be its nature. With no distance estimate of any type, G may be a distant background galaxy of which many are in the image.

While A is the brightest of the galaxies in the group and likely the most massive, B has the largest diameter, which I measure at about 160,000 light-years. I measure A at about 95,000 light-years in size though this is a guess since it is partly lost either behind or in the glare of galaxy B. So I measured the southeastern half and doubled that for a size. Being a tightly packed ball of stars it likely has more mass than the larger disk of galaxy A.

Galaxies G and H are listed at NED as being dwarf candidates. If G is a true member of the group it is a small spherical galaxy about 16,000 light-years across so would be a dwarf. H, however, is much larger, being almost 50,000 light-years across. Far too large to be considered a dwarf. Maybe it got this possible classification before its distance was known. But then it would have had to be considered much closer than the others in the group or else others would have to be dwarf galaxies as well and none are listed that way.

While this field was shot through clouds of varying thickness I think the colors are not far wrong. EXcalibrator said red had to be toned down to get the spectral colors of the stars right, this adjustment wasn\'t severe. I believe colors to be close to correct. Clouds did limit color in very faint stars and galaxies. Green was hit the worst but most easily compensated for. All bright stars had strong green halos which Hasta La Vista green easily eliminated. Imaging through clouds has been a near constant problem this spring. I\'m getting used to it. 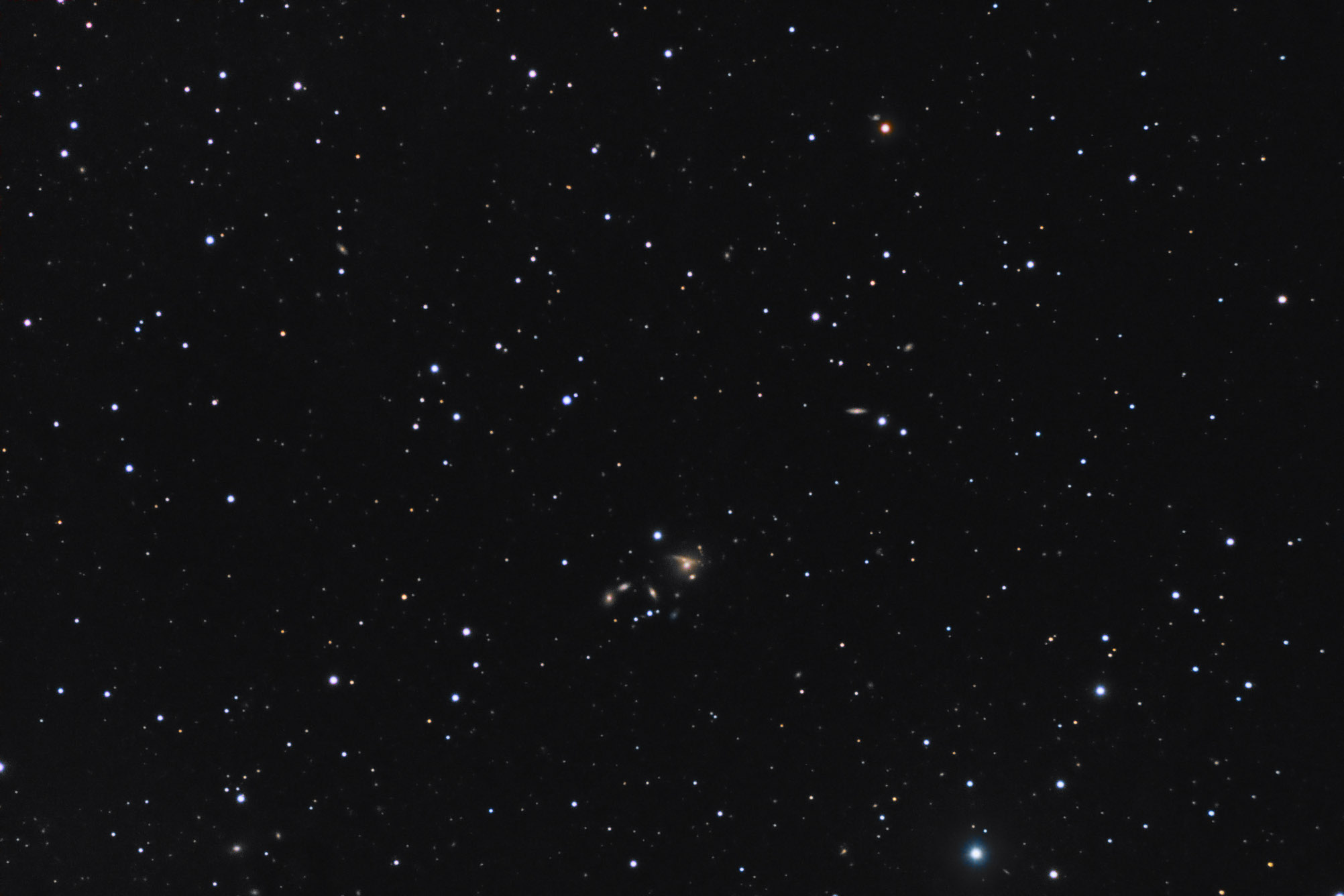 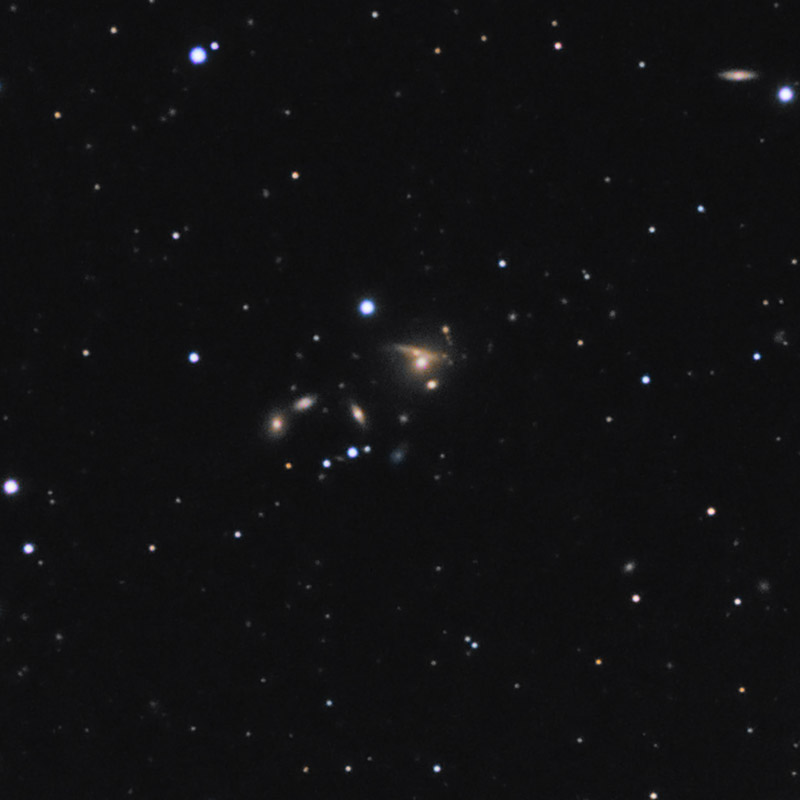 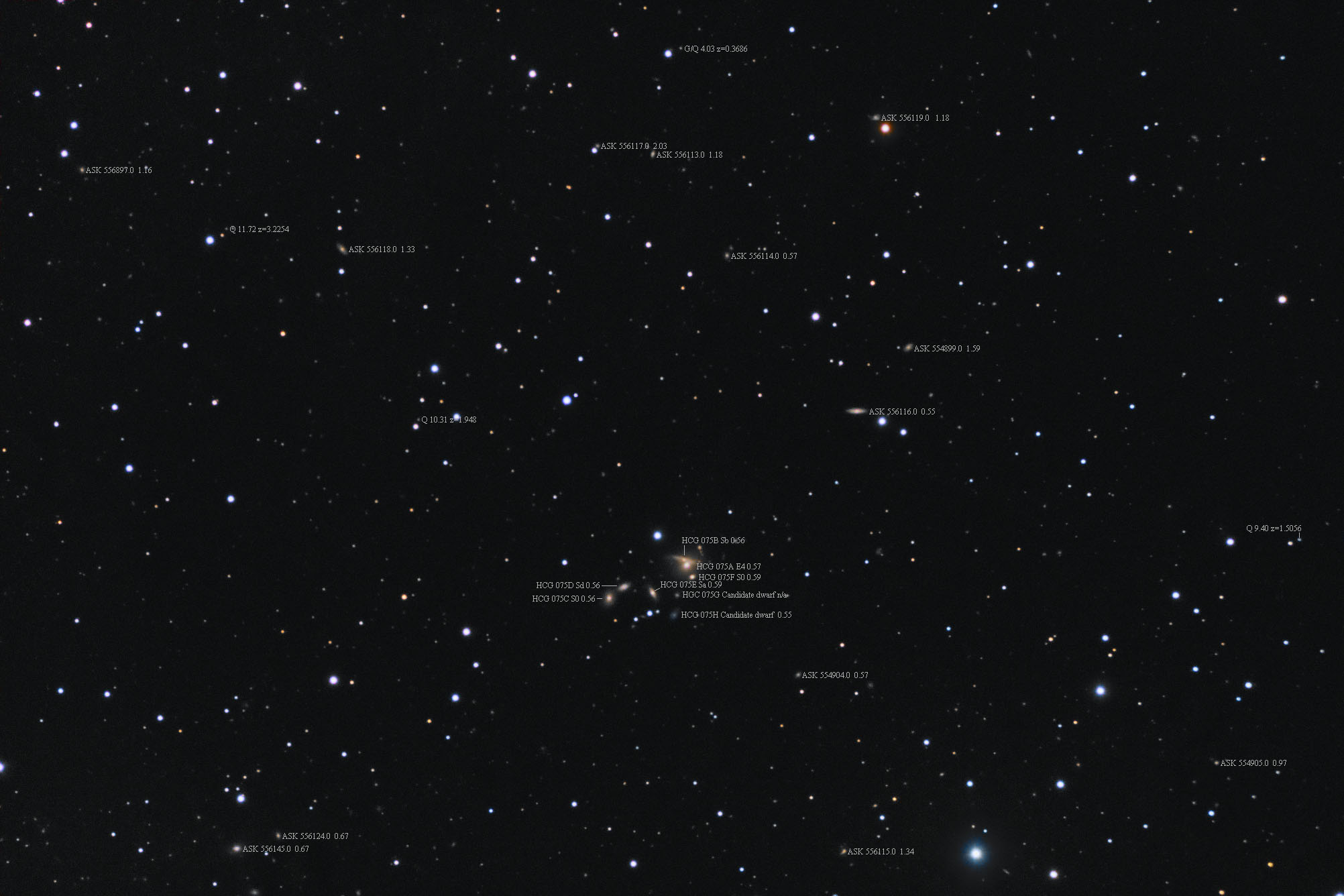