Phillip Holmberg studied galaxies. Nine of them in enough detail they have since been named after him. Eight are far enough north I can reach them from 47N. All were put on my to-do list. I\'ve managed to get a few of them; II, IV, VIII and IX and now V. The first 4 were all dwarf galaxies as are most of them. Holmberg II made Arp\'s list as #268 on his list of peculiar galaxies. Of the 9 the most \"normal is this one, Holmberg V. It is a rather normal SAB(rs)c spiral galaxy. The surface brightness is lower than normal but not to a great extent. It does have an odd straight arm segment south of the core that runs nearly due east before curving into a normal looking arm. Arp did have a category for this type feature. Apparently, it didn\'t make the cut. Why it attracted Holmberg\'s interest I haven\'t determined.

It does have a small apparent satellite dwarf galaxy, SDSS J134039.25+542053.6. With no redshift data, I can\'t be certain it really is a companion. It is aligned with the minor axis of Holmberg V. Holmberg had the idea that such galaxies tended to align with the minor axis of their galaxy. I assume this means they orbit around the galaxy at a steep angle to the plane of the galaxy to hold this alignment. The problem is others can\'t seem to confirm this as a real situation. http://www.astro.yale.edu/vdbosch/align.pdf Was this galaxy one he used to try and support his idea? I just can\'t track this down as yet. Considering how different this entry is compared to the other 8 I have no other idea as to why it made this very short list.

Holmberg V seems to be a rather lonely galaxy but for the possible companion. No other galaxy in the frame comes within 740,000 light-years. I didn\'t check for companions out of the frame.

The field contains an above average number of quasars, 9 of them. I wonder if Arp knew about this? He had a wild idea that quasars were ejected from peculiar galaxies rather than being distant massive black holes as we know them today. This high number around a rather normal looking galaxy (but for that straight arm segment) might have been a serious problem for his idea.

There are two galaxy clusters in the image. One attracted my interest. It is close at only 1.8 billion light-years. Above its bright cluster galaxies is a group of galaxies (and 2 stars) that make a nice \"V\" shape pointing to the upper left. Are these part of this cluster? I found no redshift data for any of them. They seem too small and dim for the 1.8 billion light-year distance to the cluster and are well off center from the bright cluster galaxy below them. Still to get to the 17 members mentioned by NED they would need to be included. Below the two galaxies with redshift data is a third bright one with a large halo. It has no redshift data but certainly appears to be a disturbed member of the group that that large, apparently tidal halo that seems to merge with the much smaller halos of the other two. Though its largest extent seems to go to the southeast, away from the other two. 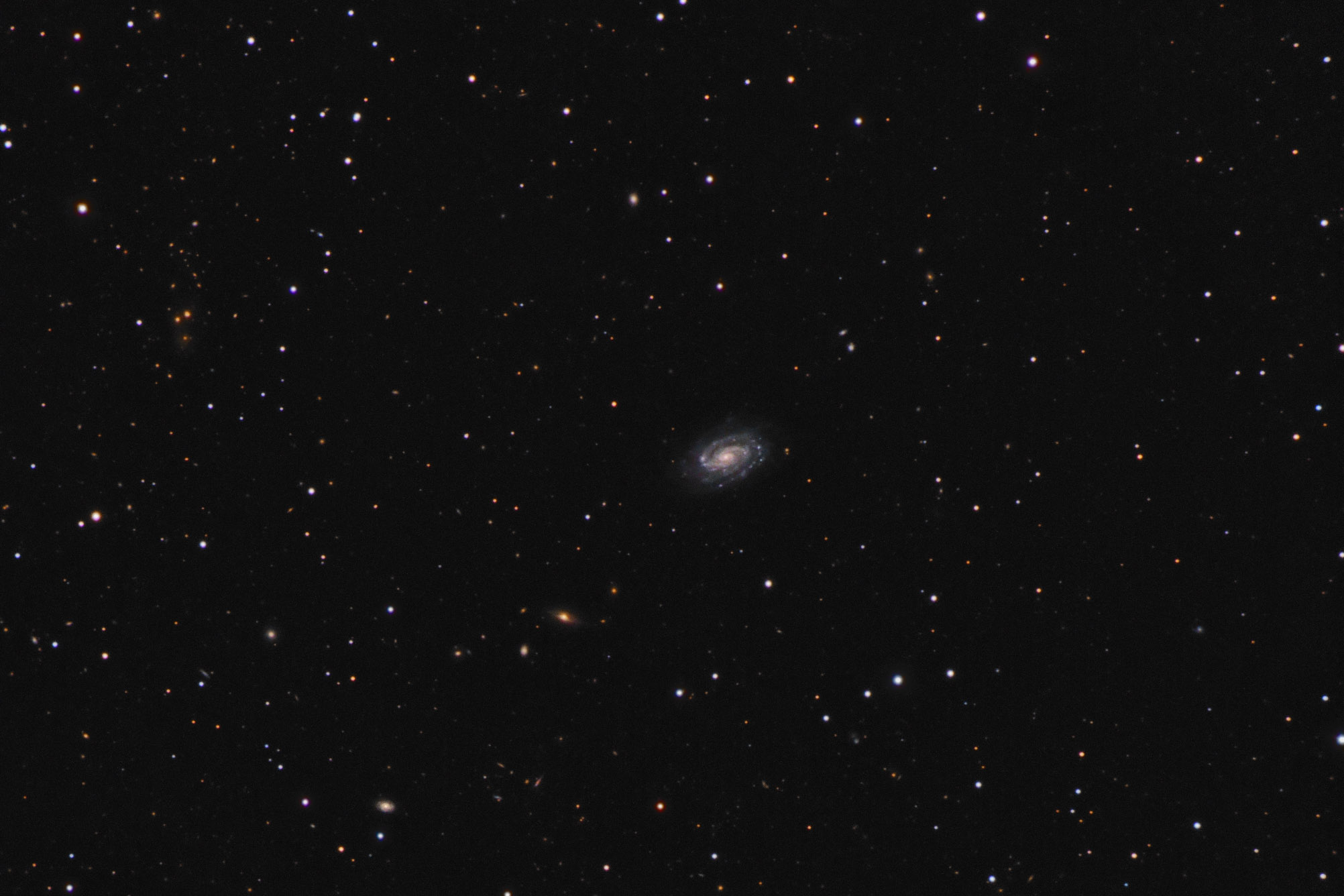 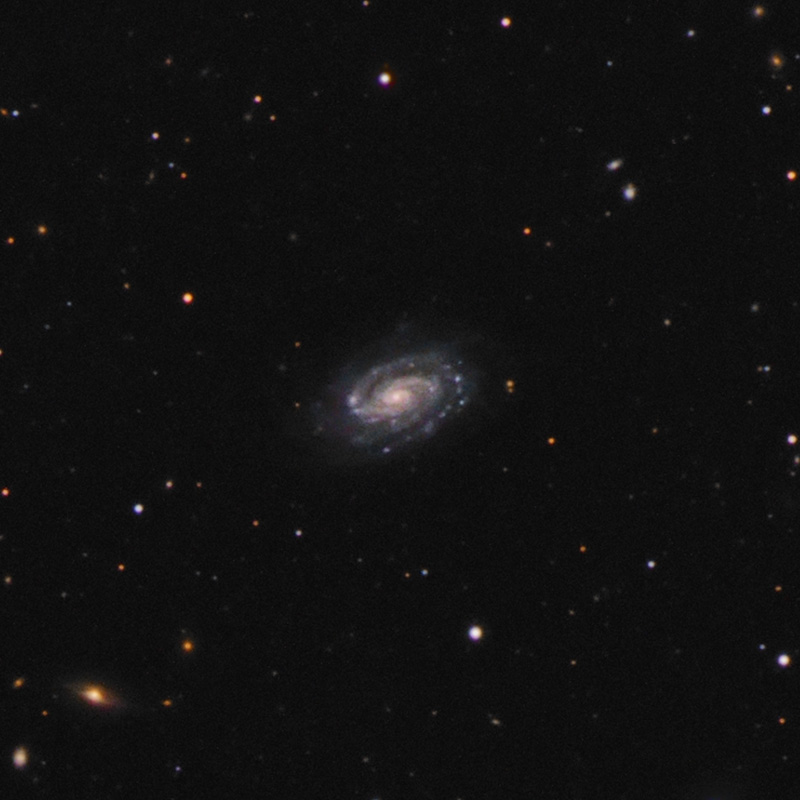 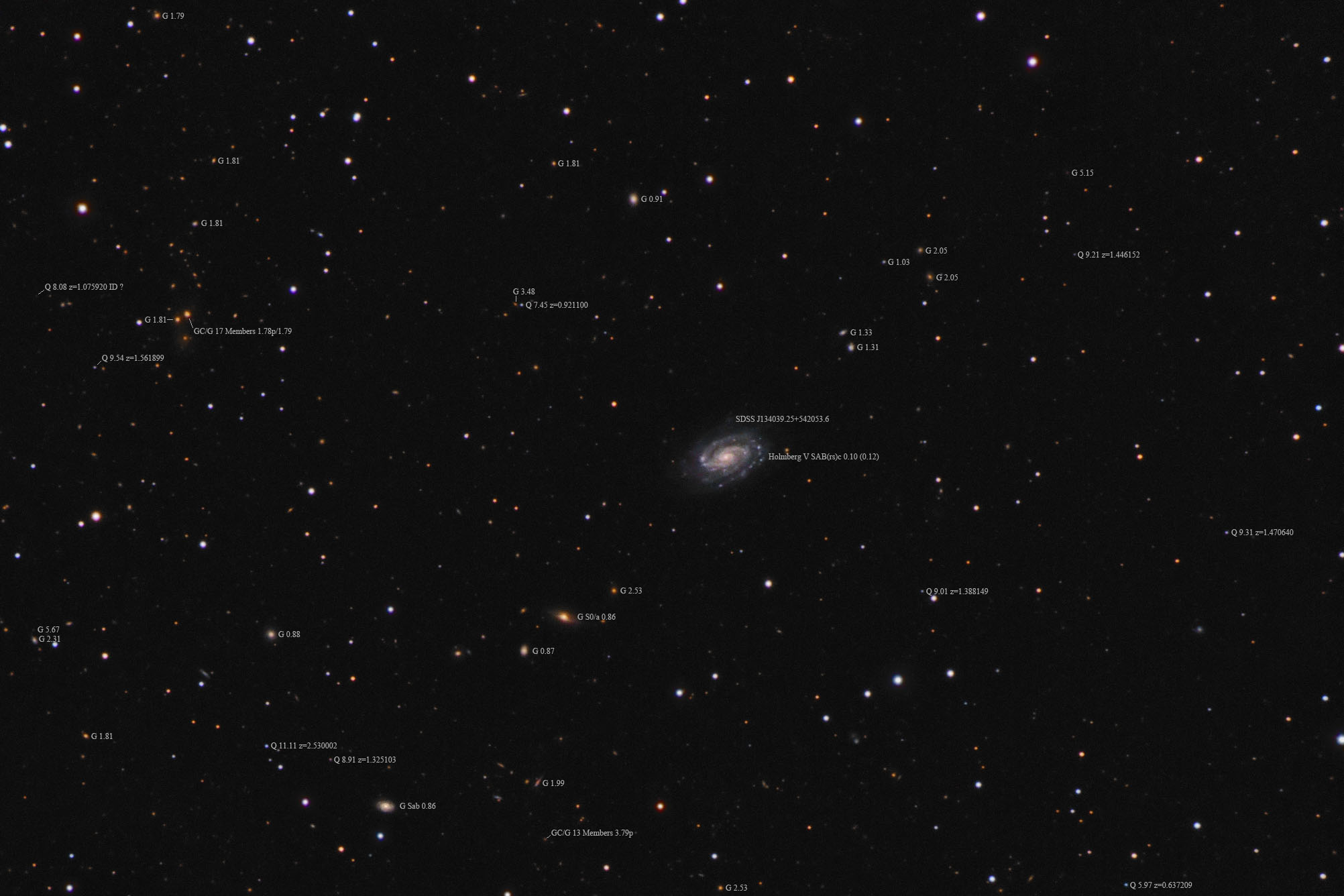