NGC 1555 is one I imaged before but in a short exposure. It\'s known as Hind\'s Variable Nebula. It is lit by T Tauri, a variable star surrounded by dust clouds. Some of the variability is due to these obscuring the star though most are due to the star itself. But these clouds also can shadow NGC 1555 causing part or all of it to dim and brighten.

In my first shot I picked up some faint nebulosity all through the field but it was so down in the noise as to be nearly invisible. My goal was to bring this faint cloud out. NGC 1555 just was in the way. It is a reflection nebula lit by a rather well studied very young star known as T Tauri. They are so young their nuclear furnace hasn\'t yet started fusing hydrogen to Helium. Some Lithium fusion may be going on but their main source of energy is gravitational collapse. They are still shrinking down to size. When they reach the right size the temperature and pressure in their core will cause the nuclear furnace to start to fuse hydrogen. So this is a star just being born. It likely came out of the huge cloud behind it. Infrared shots show this cloud full of forming stars. But so far none are hot enough to light it up like more famous emission nebula like the Orion Nebula so they are mostly dark. But if you expose long enough they do shine by the light of the rest of the stars in our galaxy reflecting off of me. That\'s what I\'m mainly trying to photograph here. Right beside T Tauri is NGC 1555 which is a denser bit of dust and gas likely blown off as T Tauri formed. Its light is now pushing this small molecular cloud away. In the link below note that photo shows stars not seen in my shot. It\'s an infrared image so shows stars in the cloud invisible in visible light. But the two HH objects it mentions are unseen in the IR shot but show well in mine as the two objects \"dangling\" from T Tauri. They emit only in visible light so weren\'t seen in the IR image. Nor is the molecular cloud itself for the same reason.

You can read more about such stars at http://en.wikipedia.org/wiki/T_Tauri

The naming system is interesting. The year is obvious. The first letter tells you when it was found in the year. A means Jan 1 to Jan 15. B the rest of January, C the first 15 days of February etc. \"I\" is not used however to avoid confusion with 1. The first asteroid found in January 2008 would have the name 2008 AA The second 2008 AB. After 25 are found we are out of letters so the process starts again with 2008 AA1 which would be the 26th asteroid found that half month. 2008AB1 would be #27, after 50 then the subscript is 2. So the process is to multiply 25 by the number after the letters and add the position of the second letter not counting I. So we know 2007 VY238 was found the first half of November 2007 and was the 5974th asteroid discovered in that 15 day period. (238*25+24) That\'s a lot! But the discovery rate is even faster now with more automated surveys online. Since I wrote this the number of known asteroids has more than doubled to 762080 according to the Minor Planet Center (July 16, 2017).

Edit: Since I wrote this my unknown asteroid has been found. In fact, it was discovered a month before the image was taken but hadn\'t been confirmed so wasn\'t in the Minor Planet database. It is (361716) 2007 VM321 at magnitude 19.3. While discovered only a few days after 2007 VY238 mentioned above it wasn\'t listed when I did my research. I suspect there was a problem defining its orbit. Note that while only a few days passed the number of asteroids found that period was another 2000 were found.

For reasons lost to history, I took this image at a resolution of only 1.5\" per pixel. Again, likely due to my inexperience back in 2007. 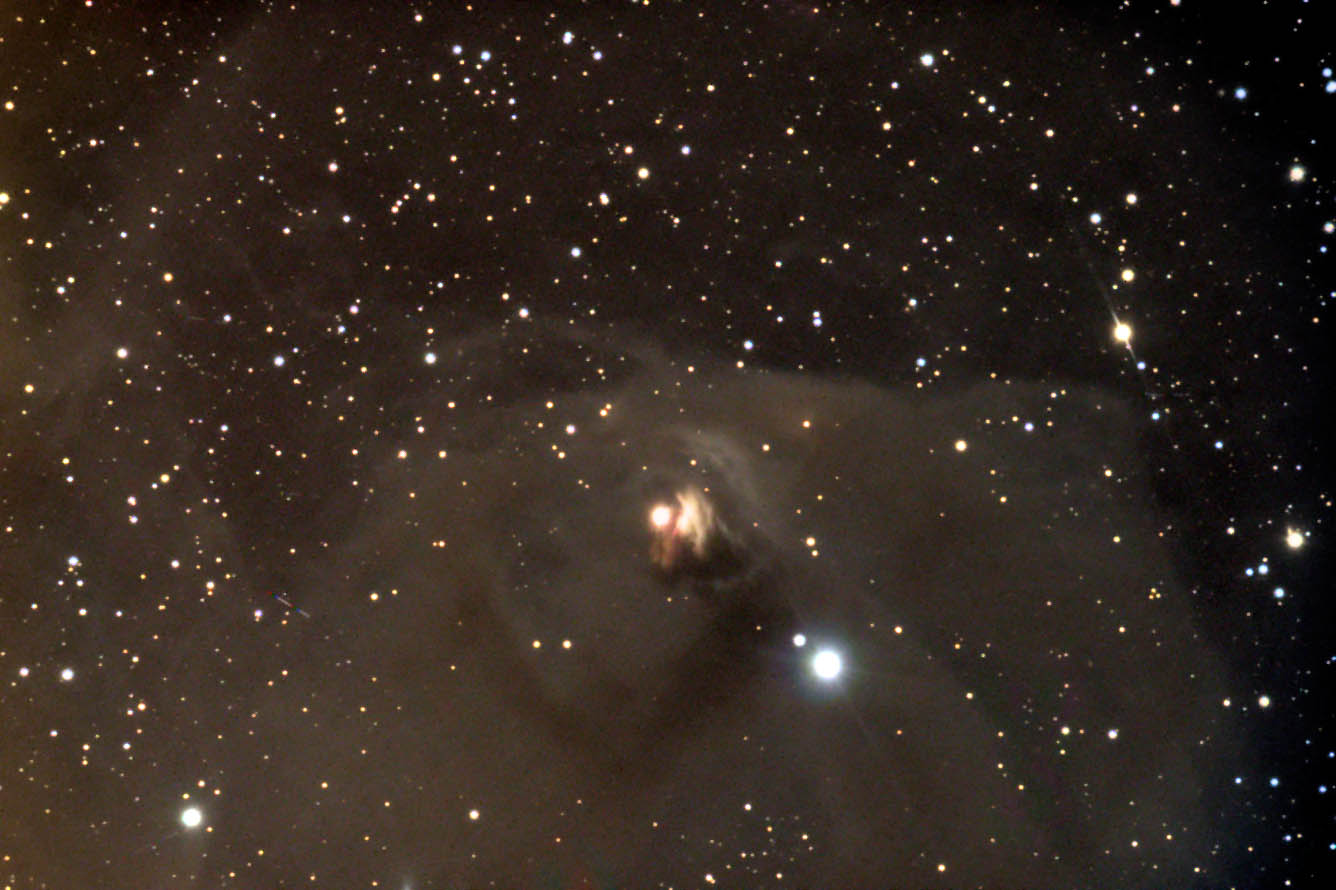 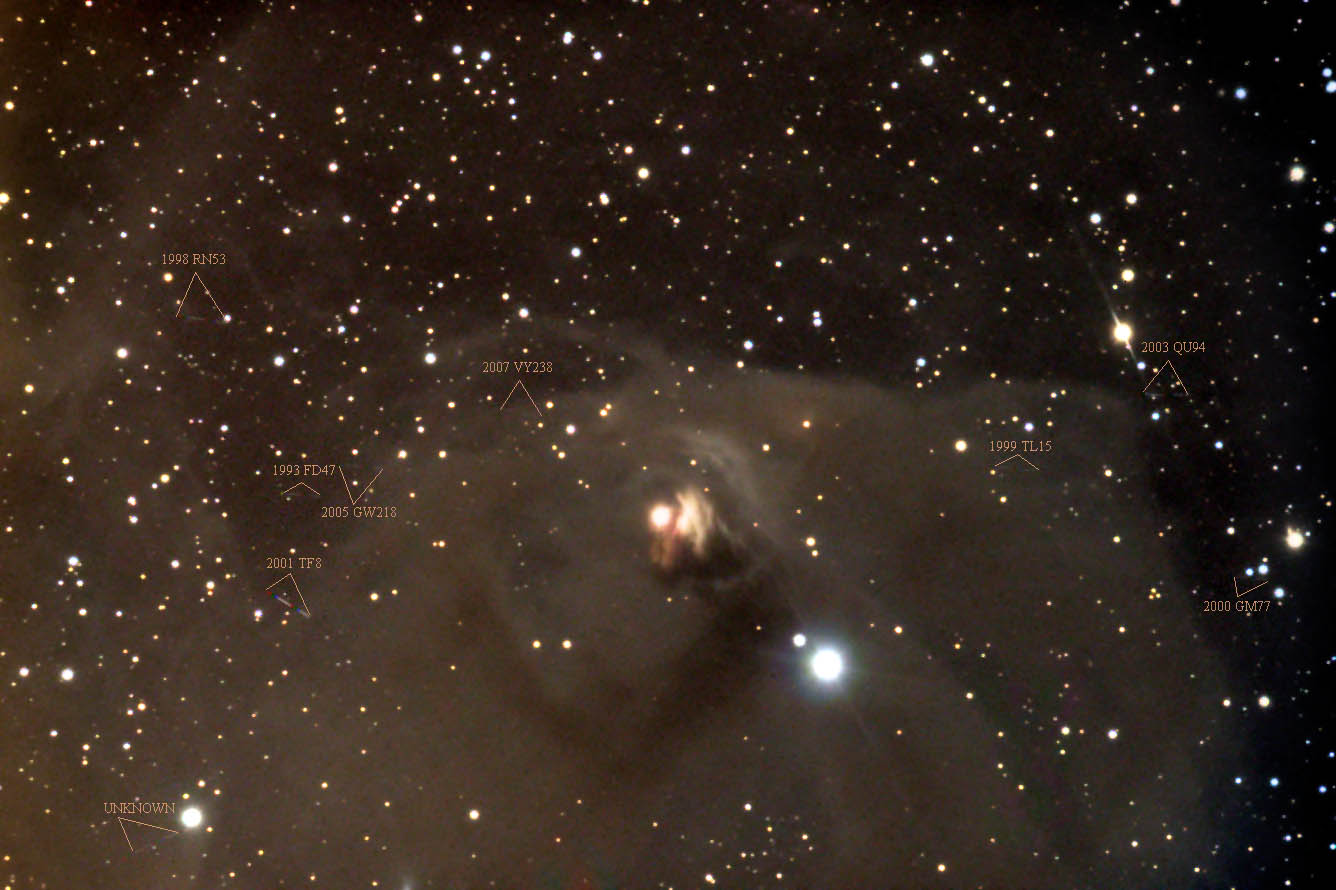