IC 226 and IC 227 are the largest members of the MCXC J0228.1+2811 galaxy cluster. The cluster is located in the southeast corner of Triangulum and is just under a half billion light-years from us. Major galaxies of clusters usually get their size by devouring smaller members of the cluster that get too close. While IC 227 shows no sign of this other than its large size compared to the other members of the group IC 0226 is an obviously highly disturbed by something it ate recently. While the two IC galaxies fall into the red and dead classification, likely due to the many mergers pushing dust and gas needed for star formation out of the galaxies, IC 0226 shows a very blue arc just beyond its very faint red disk. Could this be the remains of its last meal? If the devoured galaxy had lots of dust and gas then that may have been available for new star formation as it was stripped from the galaxy as it spiraled in to its doom.

Arguing against this is that it is a low surface brightness galaxy with a rather small black hole at its core with only minimal AGN activity. So what caused the odd arc of bright blue stars outside the main disk of the galaxy? I found little on it but for this paper which looked mostly at the HI in this and other similar giant low surface brightness galaxies, https://arxiv.org/abs/1609.07544 .

As I just mentioned IC 226 is considered a Giant Low Surface Brightness Galaxy by what few papers I found on it though NED made no mention of this. While the core region seems to be of normal brightness the disk is very faint. I enhanced this region to get it to show. With my normal stretch, the region between the center and the blue disk was very hard to see. So I went against my usual rule of not treating one part of an image differently than the rest. It certainly is a giant galaxy. Including the faintest parts, I measure it as over 350,000 light-years across. That makes it slightly larger than IC 227 which I measure at 250,000 light-years. Still, a giant elliptical galaxy. Even PGC 9415 is large at 170,000 light-years.

In the southeast part of the image is LEDA 213001 and PGC 9447. LEDA 213001 shows a faint drawn out arm or plume toward PGC 9447. This is just a coincidence. While LEDA 213001 is a member of the galaxy cluster PGC 9447 isn\'t being only 77 million light-years distant. Some other galaxy likely caused the drawn-out arm of LEDA 213001. Such interactions are common galaxy clusters but which one caused it, or even if it is one in the image, as the cluster extends beyond my image, I don\'t know. PGC 9447 looks a bit distorted or warped but I think this more due to its wide arm structure seen nearly edge on. I likely would look more normal seen face on.

I suspect most galaxies in the image, especially the red ones, are likely cluster members. Unfortunately, this area of the sky is not very well studied. I listed all galaxies that had redshift data at NED. I didn\'t search further though should have I suppose. It certainly is full of galaxies. NED didn\'t have a size for the cluster nor a galaxy count. The area just isn\'t well studied as I keep saying. 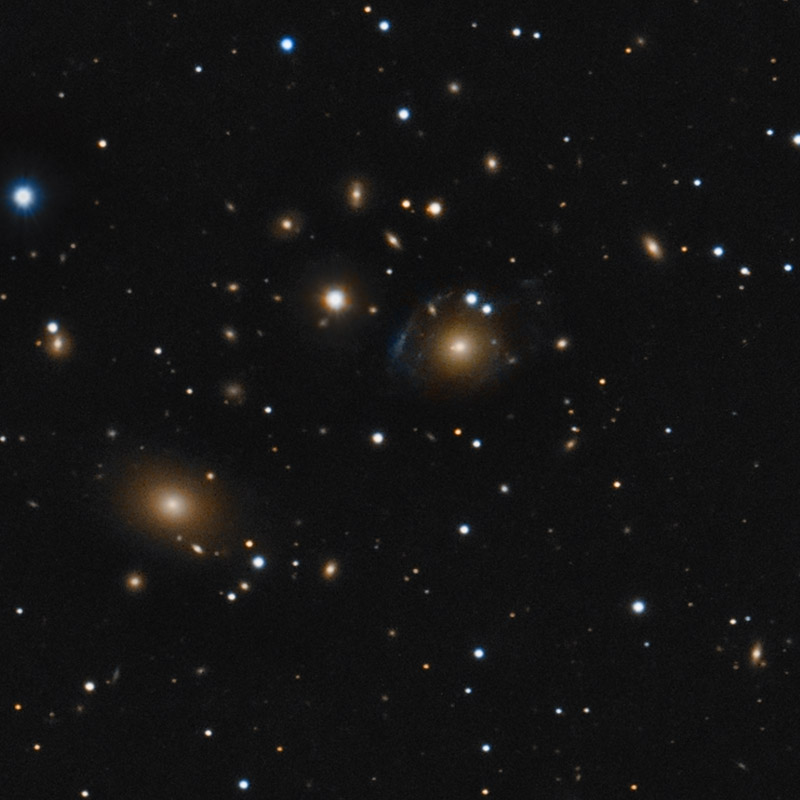 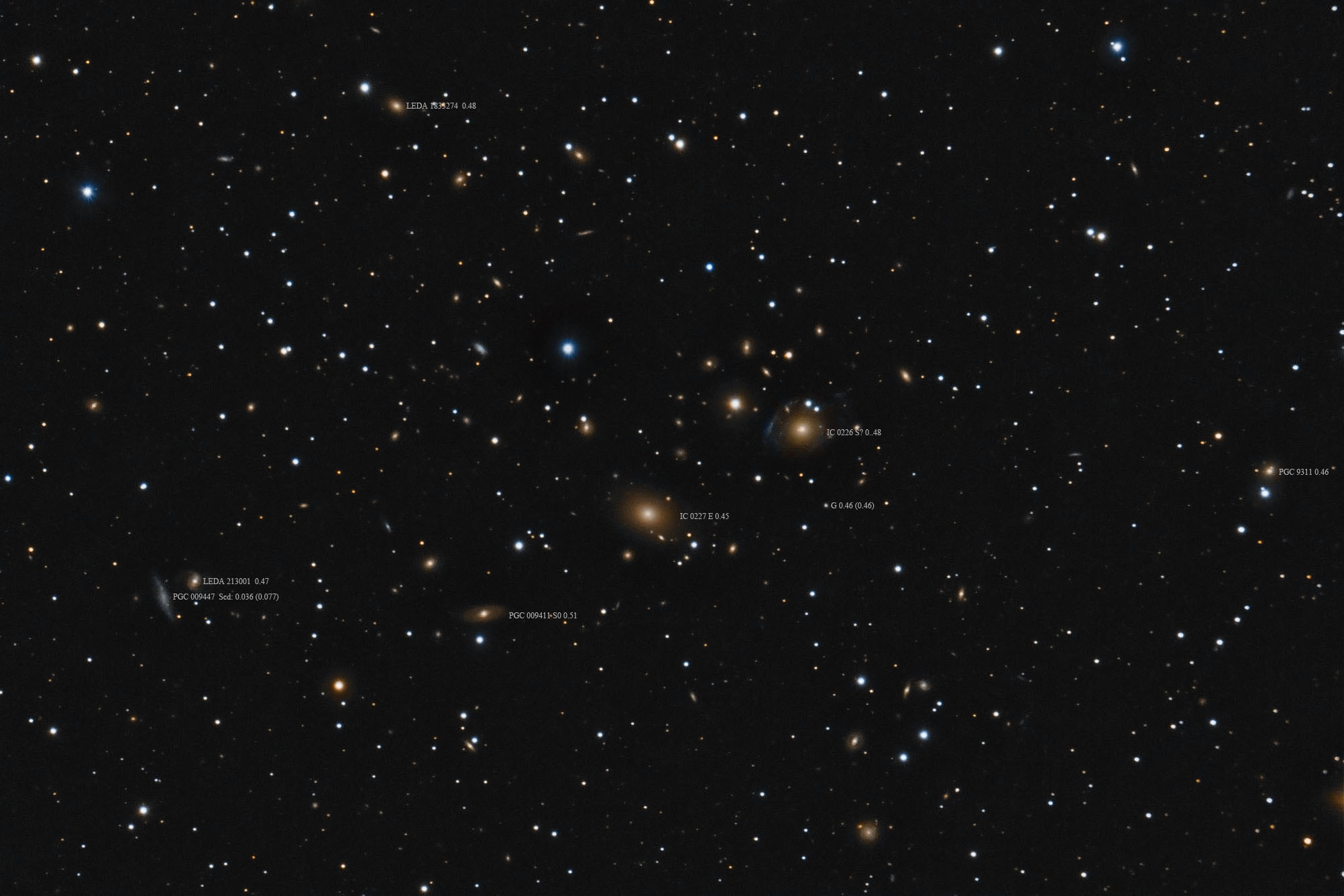 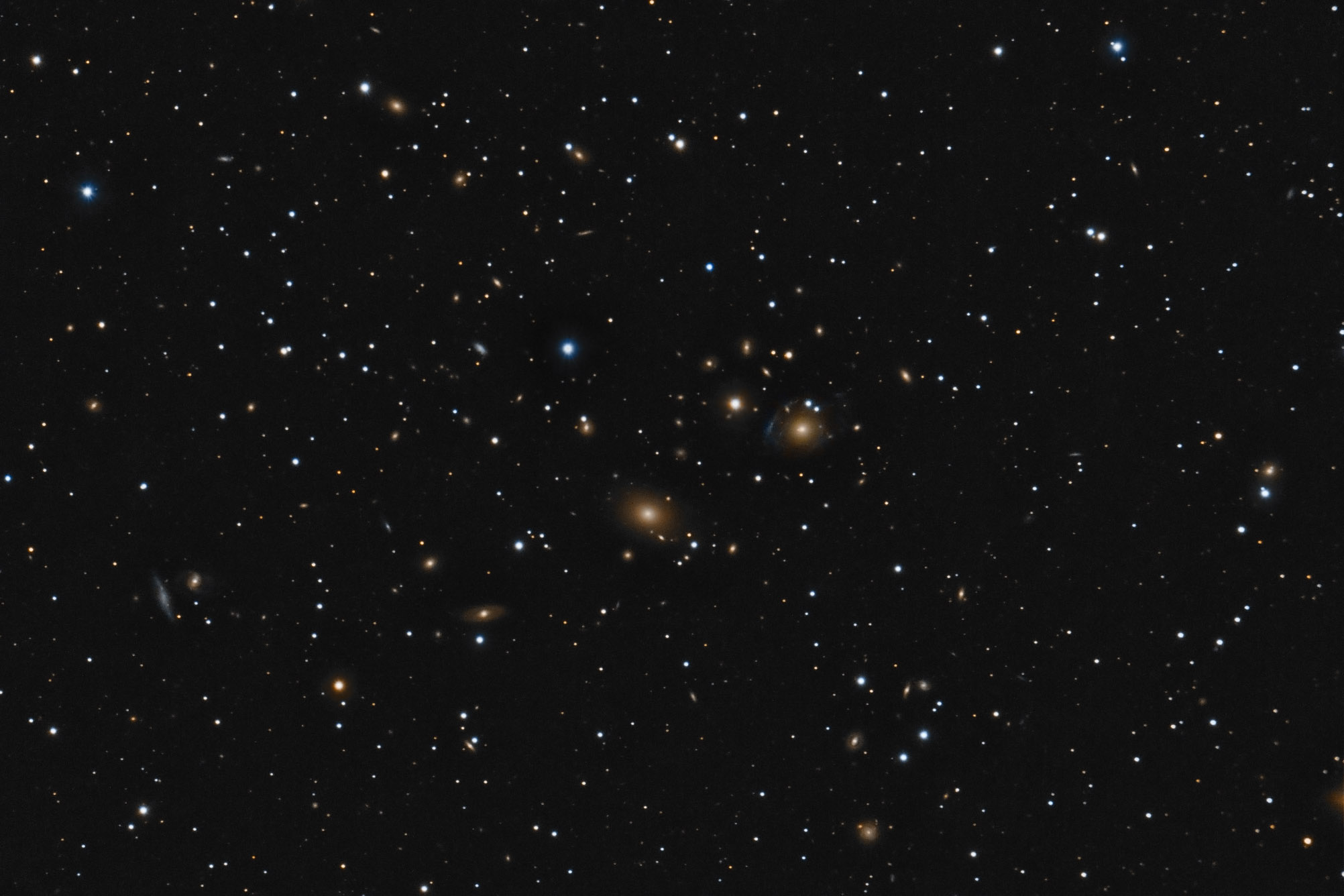