This field is on the far southeastern edge of the Abell 426 galaxy cluster. It is better known as the Perseus Galaxy Cluster or the NGC 1275 galaxy cluster. NGC 1275 is about 1.33 degrees northwest of this field. The cluster is about 230 to 240 million light-years distant. I was most interested in IC 320 and PGC 12816. The latter is has a non-redshift distance that fits the cluster. Though its redshift puts it about as much closer to us as IC 320 is further away. Both are listed as cluster members. Their redshift distances may be due to their orbital velocity and being on the outskirts of the cluster which is considered to be very large being over 800 minutes of arc across. I found no non-redshift distance measurements for it. Assuming the redshift distance of 310 million light-years is right for IC 320 I measure its size at 120,000 light-years. PGC 12816 is 95,000 light-years across at its redshift distance. If both are considered to be at the cluster\'s distance then IC 310 is 90,000 light-years across and PGC 12816 130,000 light-years across. They almost trade places. IC 320 was discovered by Lewis Swift on September 14, 1888. Dreyer says of it \"extremely faint, pretty small, round, very faint star close to west\". I measure that star at magnitude 14.6. That would be faint in my 10\" reflector but easy in the 14\" on a good night which this one wasn\'t.

Galaxy clusters are often dominated by elliptical or S0 galaxies. Moreso at the center than at the edges. That seems to apply here as this field has more spiral galaxies than in normally seen in a galaxy cluster. Though many of them may be beyond the cluster as redshift data for many was not available. They do look more distant if angular size is any clue.

Note the pair of apparently interacting galaxies to the southwest of center and directly west of the asteroid. Only the plumed blue galaxy has a redshift putting it 630 million light-years away. Its red companion has no distance estimate that I could find. So my surmise that they are interacting is mostly due to the huge plume from the southern galaxy. I suppose the red galaxy could just be unrelated but without distance data, I\'m going to assume it is the cause of the plumes. Though they could be due to a merger with a galaxy no longer visible except to a spectroscope due to its stars having a different motion than those on the big galaxy. For now, I\'ll go with them being interacting.

I was surprised that while the galaxy cluster is well studied a surprising (to me at least) number of galaxies in the image had no redshift value. All that did are shown in the annotated image.

The night this was taken was rather poor for transparency. This is shown by the trail of the one asteroid in the image (155691) 2000 OS22. It is listed as being 18.4 magnitude. I should have shown the red, green and blue trails if the night had reasonable transparency. Those don\'t show even on the FITS images. Thus the conditions cost me over a magnitude. Note too that the asteroid trail has a dim spot near the center. That shows clouds must have gotten rather thick for a bit while the image was taken. I apparently was not watching the data come in as I made no notes about transparency suffering at some point during the imaging run. One other asteroid at magnitude 20.4 was in the image. Normally those show well in the luminance frames. It was so faint in the FITS luminance images it didn\'t survive processing. Most asteroids I image are in Retrograde when I take them so moving west but both were moving east in normal motion when this image was taken.

Given the night\'s poor transparency I wish I\'d given it more than my usual 40 minutes of luminance time. 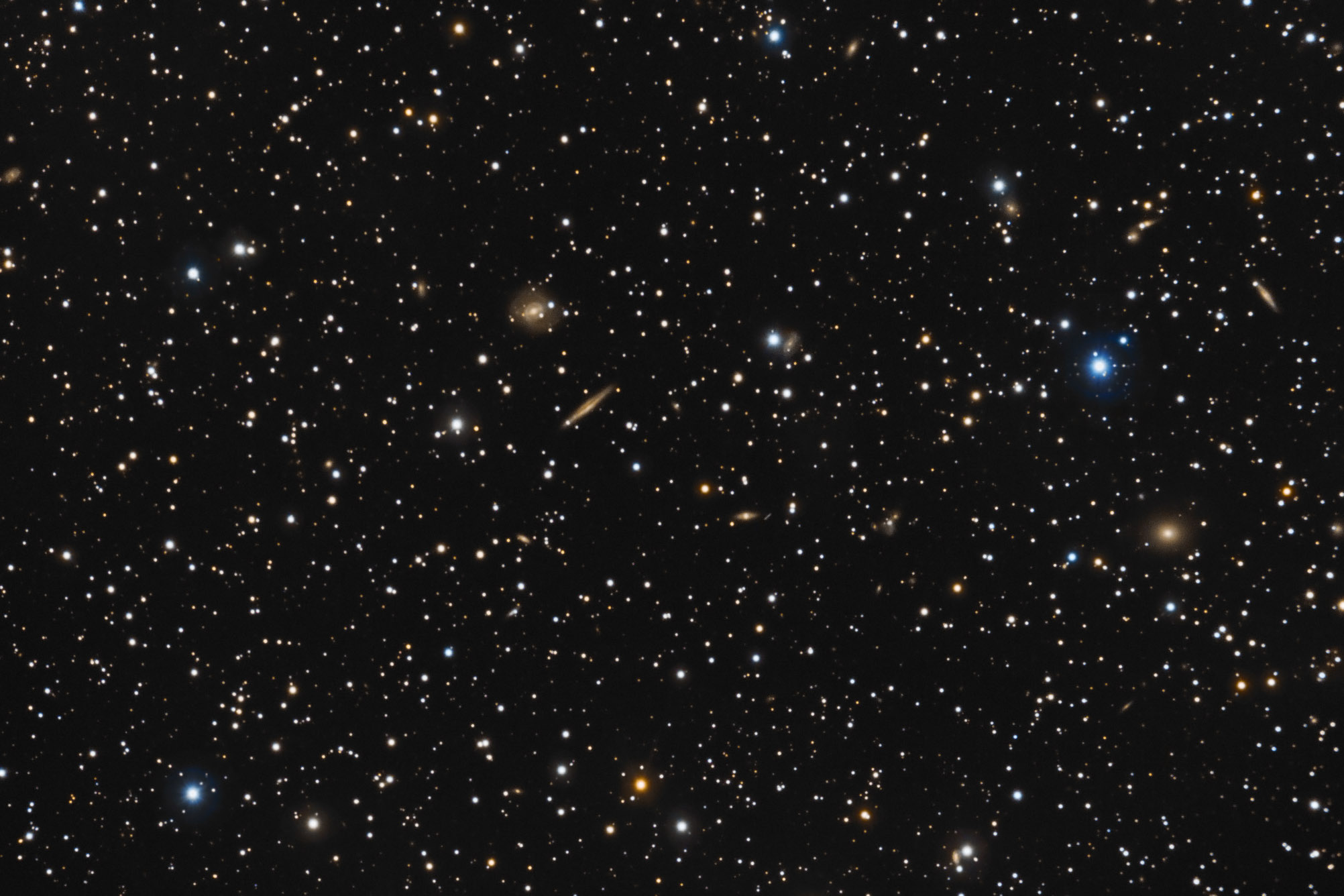 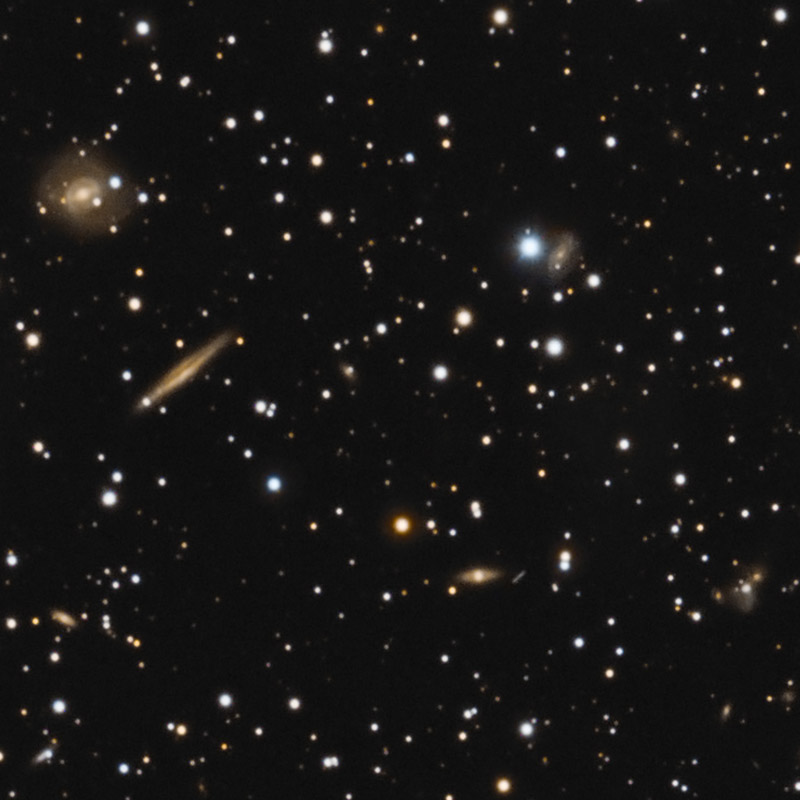 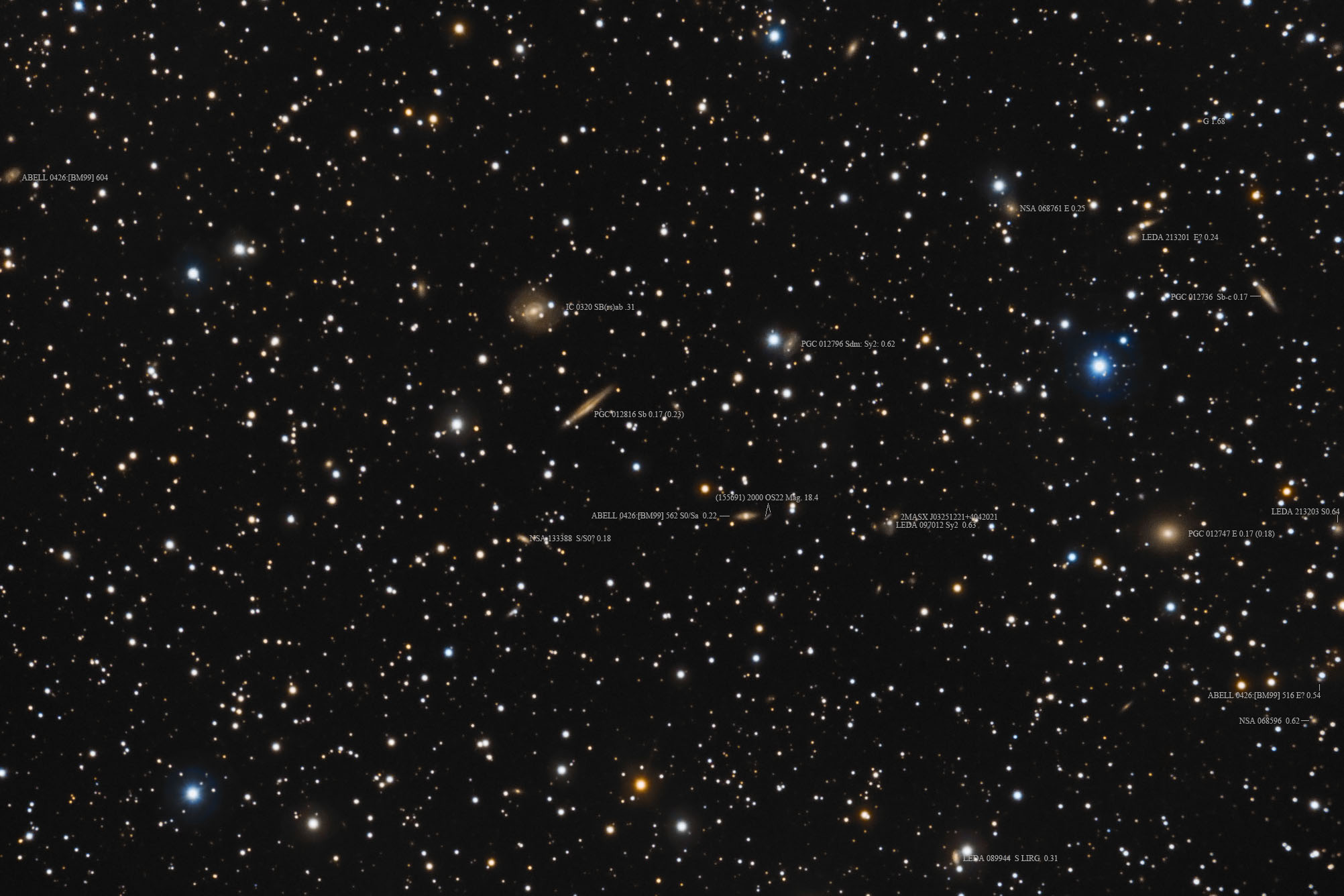