IC 421 and VV 848 are a pair of interesting but unrelated galaxies either of which could have easily made Arp\'s atlas of peculiar galaxies. The field is located where you\'d not expect such interesting galaxies to reside, Orion 2.6 degrees south of the far more famous Orion Nebula.

IC 421 would qualify for Arp\'s category of galaxies with one heavy arm. Besides the long drawn out and rather bright arm to the north the galaxy\'s structure is very lopsided with the core well east of the center of the galaxy\'s disk. It is classed as SAB(rs)bc and is about 165 million light-years distant by redshift though a few Tully Fisher measurements put it some 20 million light-years closer. It is a rather low surface brightness galaxy but for that one arm. Including its faintest outer parts, it is nearly 200,000 light-years across. It was discovered by Williamina Flemming on June 27, 1888. The story of how a woman astronomer at Harvard managed such a feat is rather interesting. At the time women were reduced to menial tasks though often demanding good math skills as they were human calculators in many cases. Williamina was a Scottish woman abandoned by her husband and working as a maid for Edward Pickering who according to legend was so upset with his male assistants proclaimed his maid could do a better job -- and she did. She didn\'t find objects looking through the telescope but by examining photographic survey plates. Most of her work was for star identification and classification. She is credited with 43 IC objects however with not the most famous of her finds. She was the first to notice IC 434 describing a dark patch in it now known as the Horsehead Nebula. The image was taken by William Pickering, brother to the far more famous Edward Pickering. Dreyer gave credit for all of Harvard discoveries in the first IC addition to Pickering but didn\'t specify which Pickering. Most assume he meant William. Later discoveries in the second addition were credited properly.

VV 848, at a redshift distance of nearly 400 million light-years and classed as S0+ pec: by NED, would qualify for Arp\'s atlas under any of several possible categories. Material ejected from the nucleus or diffuse counter-tails or just diffuse elements would all seem to fit as he has something similar in all of these. In any case, this is obviously (to us 50 years later) due to a past interaction with the diffuse material, counter-tail or ejected material being tidal plumes from the interaction. The question remains; what did the interacting? The MCG says of it: \"Interacting. The tail 0.6 arcmin long is directed away from the galaxy 18 mag, and is at 1.4 arcmin north.\" That would indicate they don\'t see the tail .6\' tail reaching all 1.4\' to the galaxy? I don\'t follow this comment as it is obviously connected. Even more interesting this dates to 1963 before Arp\'s atlas was published and before many of the images were taken yet he never mentioned interaction being involved with his entries that clearly were due to interaction. Still, this doesn\'t answer the question of what did the interacting? It is over twice the distance to IC 421 by redshift so that galaxy is ruled out. NPM1G -07.0197 is the same distance, much smaller and looks pretty much undisturbed. There is an odd puff in its outer halo sort of on the side toward VV848. Still, could such a small galaxy do this to a much larger one? If the large galaxy is low density it could but that doesn\'t appear the case here. The only other candidate is LEDA 3080980 10 minutes north and well out of my frame. It is even smaller and less disturbed so definitely ruled out. The galaxy near NPM1G -07.0197 is 2MASX J05325377-0745054 and shows no sign of disturbance and has no distance data available if it did so I rule it out as well. Is this a merger? I can\'t find anything either way so it will have to remain a mystery. While it may appear smaller than IC 421 that\'s an illusion due to its large distance. It measures over 225,000 light-years cross including the plumes north and south.

Being in the zone of avoidance this field is very poorly studied and I found little to annotate but included what little I could find on it with redshift data. 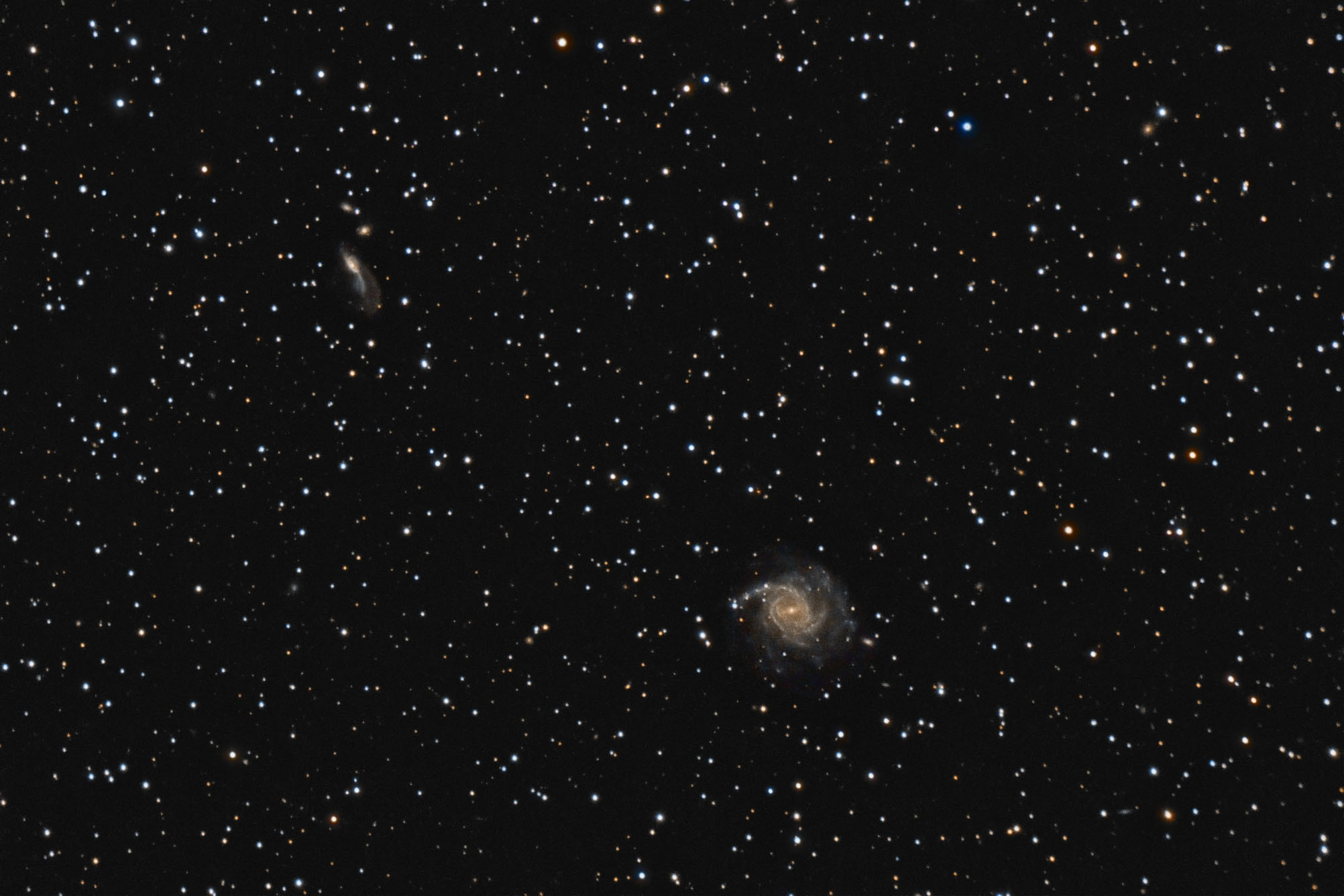 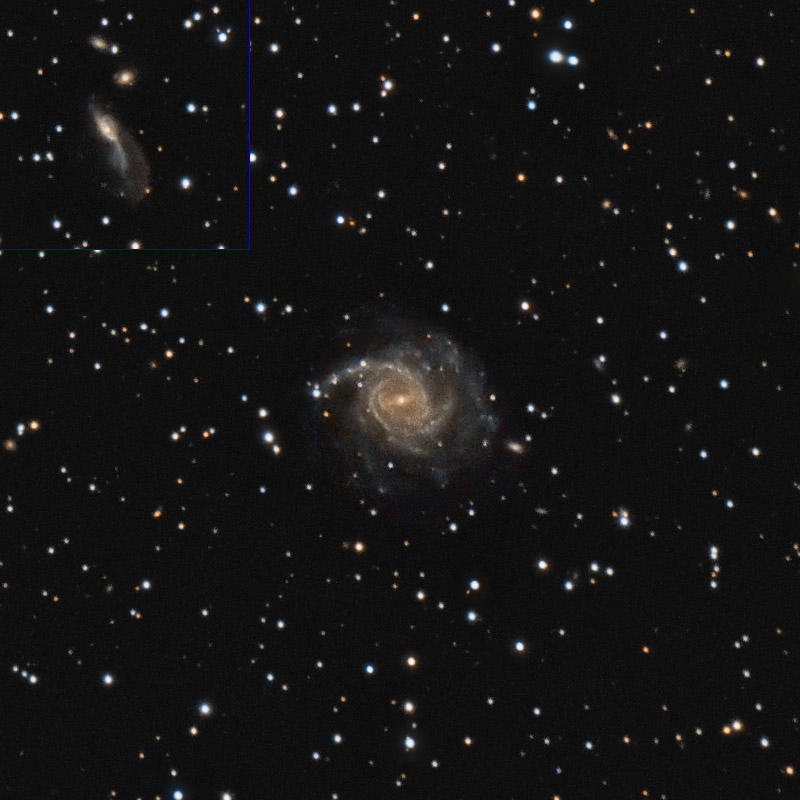 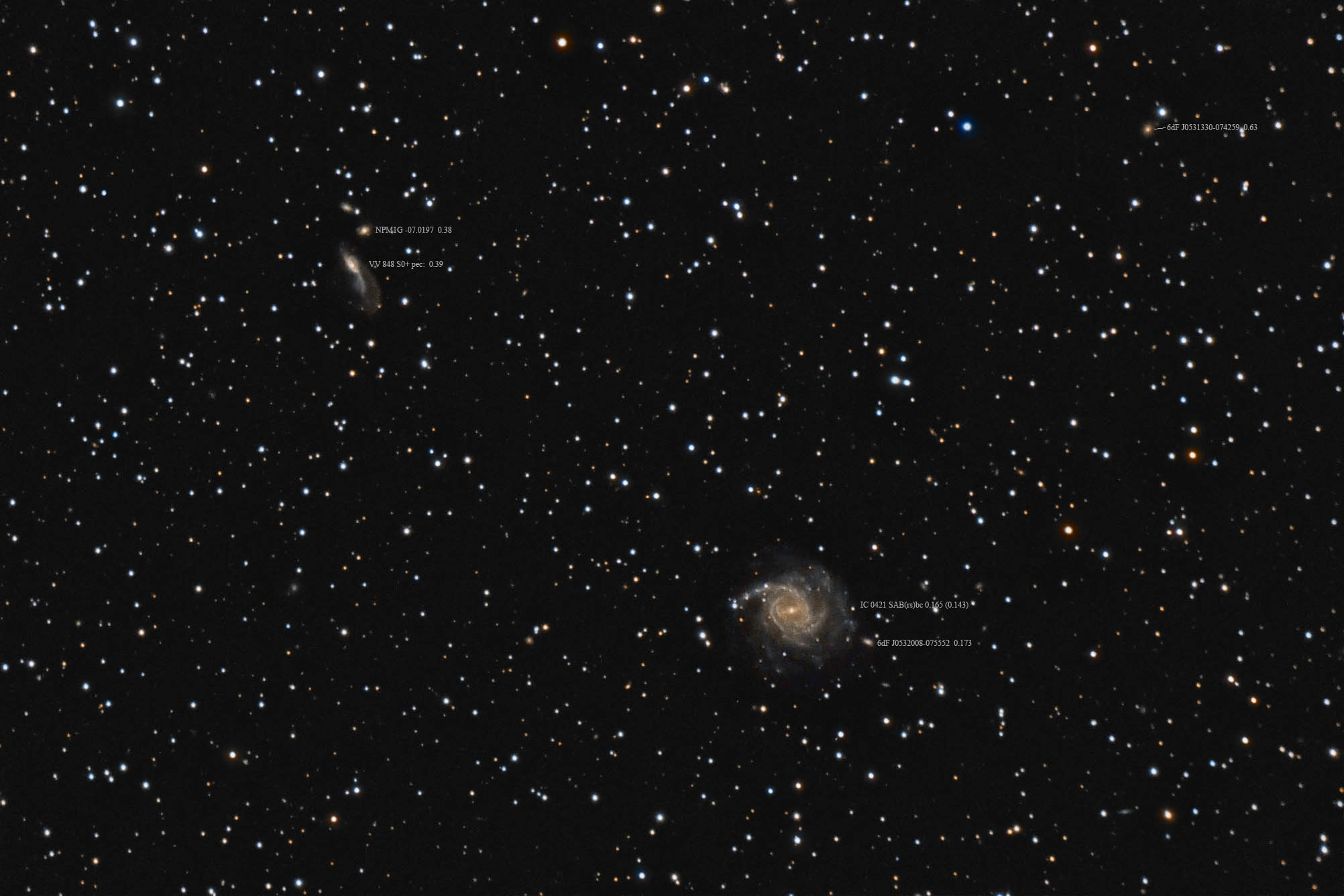