IC 423 and IC 424 are a pair of reflection nebula in the region of Orion\'s belt two thirds of the way from Alnilam (middle star) and Mintaka (western belt star). I found no distances for these. Both seem to have tails pointing to Mintaka and heads pointing to more distant by angular measurement Alnilam. I\'m going to go out on a limb and say that since their heads are toward Alnilam that it is the illuminating star. It is a B0Ia star at 1342 light-years per The Sky\'s database. Mintaka is a 09.5II star about 900 light-years distant. That puts it in front of most of the nebulae in the area with known distances.

IC 423 is sometimes called \"The Teardrop Nebula\". Considering how bad my imaging weather has been for months that seems appropriate. An interesting description of IC 423 going back to an image taken with the Crossley reflector and published in 1918 reads: \"A very peculiar and interesting mass of diffuse nebulosity, 6\' x 4\'. The central part is vacant, giving the object the general appearance of a pear-shaped ring, rounded at the southern end and pointed at the northern end, which is directed approximately toward {delta} Orionis, 27\' distant. There are flame-like protuberances on each side to the north. Quite faint.\" By today\'s imaging standards it isn\'t all that faint and certainly not \"vacant\" in the center. That region is much redder and somewhat dimmer but not empty. I couldn\'t find the Crossley image itself, unfortunately.

IC 424 has two stars in it. To my pareidolia challenged brain they look like slightly red and blue eyes. I turned the cropped image to south up. Is it a three-eared cat or a ghost? The Crossley description reads: \"A smaller mass of diffuse nebulosity, somewhat resembling I 423; 2.5\' x 1\'; the sharper western endpoints to {delta} Orionis, 24\' distant.\" Delta is Mintaka. To me, that\'s backwards. The Delta end is fuzzier, not sharper and fades away. Like IC423 it has a reddish darker core that sort of makes the nose of the cat or ghost.

Both were discovered by Williamina Fleming on June 27, 1888. A short bio of her reads: \"Scottish-American astronomer. Abandoned by her husband, she was reduced to working as a maid. Her employer, a professor of astronomy at Harvard, was so dissatisfied with the work of his assistants that he claimed: \"My maid could do a better job.\" And she did, becoming one of the most famous female astronomers of the 19th century, and an honorary member of the Royal Astronomical Society.\"

Conditions went down while this was taken. They were pretty good for the luminance data but transparency went bad on me for the color data. This meant I picked up nothing but noise for the faint nebulosity in the background. I didn\'t realize this until I went to process it too late to take more color data. 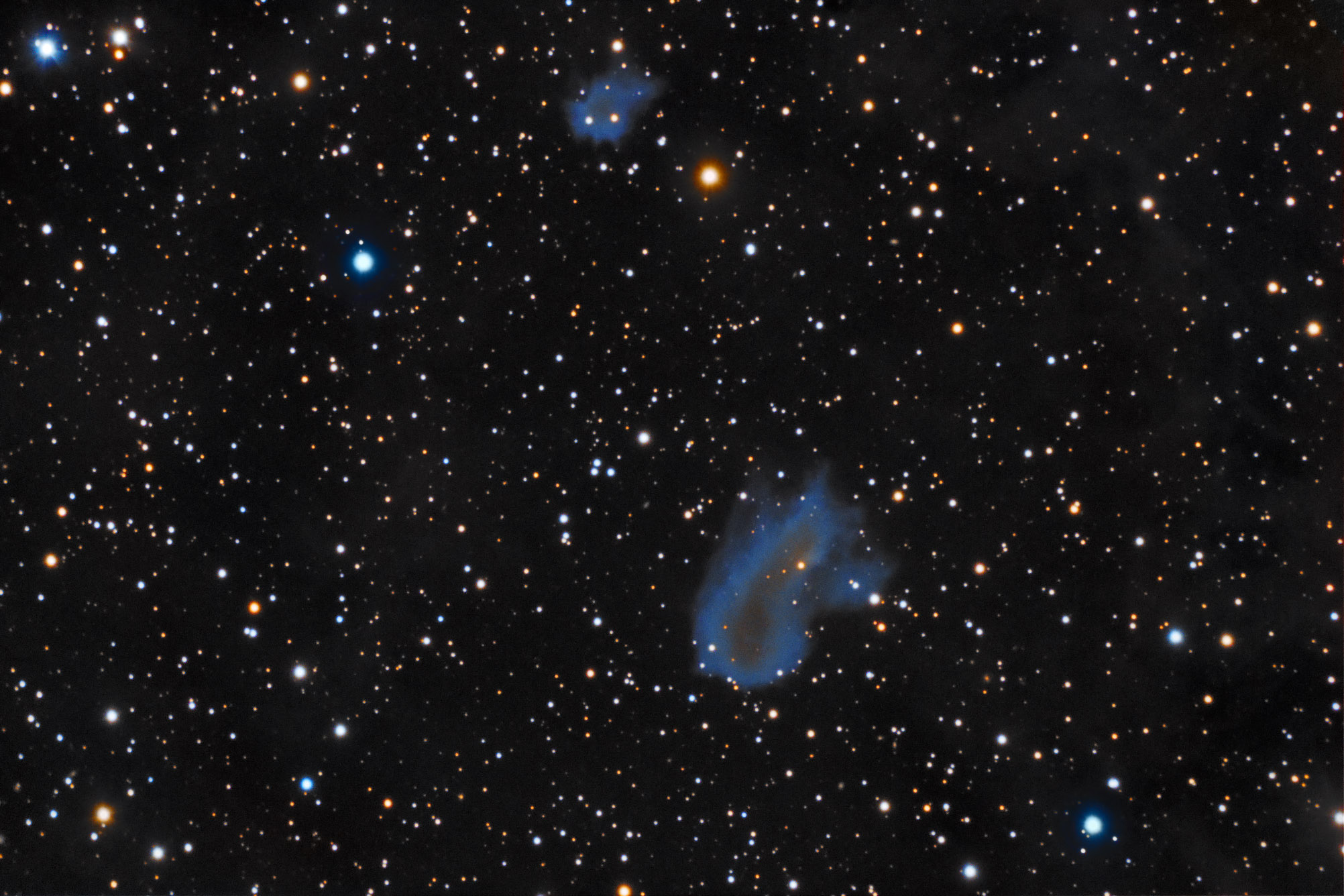