IC 431 and IC 432 are two reflection nebulae just northwest of the far more famous Flame Nebula, NGC 2024 in Orion. While it might appear they are related the Hipparcos data for the central stars of each tells a different story. IC 431 to the west (right) has at its core the B3Vn star HD 37674 which Hipparcos puts at 1,059 light-years. Brighter and larger IC 432 to the east (left) has at its center B2IV HD 37776 aka V 901 Orionis which Hipparcos puts at 1,664 light-years. So not only does the nebula appear larger it really is even larger than the apparent difference in size would suggest.

Of possibly even more interest to astronomers is V 901 Orionis. It is a variable star whose rate has both increased and decreased over time with an overall decrease. Several papers have been written to explain its odd behavior. Both agree it likely is due, at least in part, to the magnetic braking of its rotation period as the star has a very strong magnetic field interacting with the interstellar medium. For those interested, see: http://cdsbib.u-strasbg.fr/cgi-bin/cdsbib?2008A%26A...485..585M and http://cdsbib.u-strasbg.fr/cgi-bin/cdsbib?2011A%26A...534L...5M for two somewhat different opinions.

The Flame Nebula is thought to be illuminated by the star Alnitak which Hipparcos puts at a distance of 817 light-years. While much of the red emission nebula seen in the image is due to the outskirts of the Flame Nebula its gas and dust are much closer than either of these nebulae. It\'s easy to think the three are related but apparently, that\'s not the case.

Also nearby and out of the image to the south is the top end of IC 434 which is partly obscured by the famous Horsehead Nebula. That is illuminated by Sigma Orionis which Hipparcos puts at 1,148 light years. Considering the difficulty of working at distances of over 1,000 light-years the error bar of the Hipparcos data is large enough I can\'t rule out that IC 431 and IC 434 might be related with a distance difference of a bit less than 10%. Hipparcos just wasn\'t that accurate at that distance. Though I\'d have expected Sigma to have created some H alpha glow to IC 431 if it were really nearby so I\'ll say that while it is possible I doubt the two are related.

Both nebulae were discovered by Williamina Flemming on June 27, 1888.

Clouds nailed one of my usual 4 luminance frames and I didn\'t notice it until just now when I processed the image months after it was taken. Too late to go back and get more data. One green frame was badly hurt by clouds as well but it did help slightly to include it so I didn\'t throw it out like I had to the luminance frame. This made for a slightly noisier image than I\'d have liked but fortunately, these are rather bright nebulae so I could make it work at the cost of some of the finer detail. The seeing was poor so likely wouldn\'t have allowed that detail even with the lost frame. 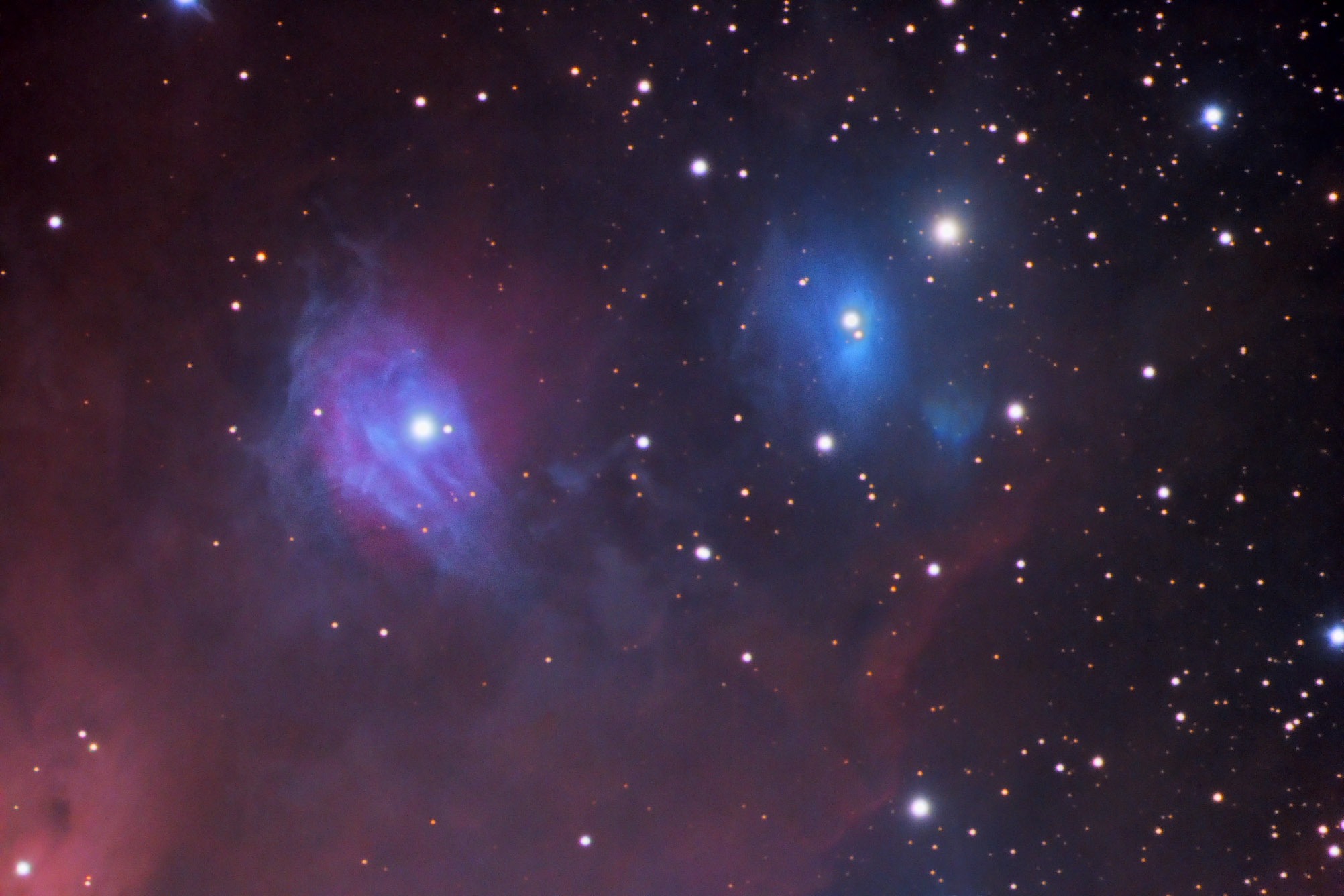