IC 0498 is a spiral galaxy that fits Arp\'s category for spirals with one heavy arm. Its arm seems odd in that the heavy part spirals in to the end of a much finer arm that spiral in to the eastern side of the core. A similar arm comes off the western side and ends in what appears to be a bunch of star clusters or is it debris from something the galaxy is digesting? NED lists one of these, up by where the heavy arm meets the much finer arm coming from the eastern side of the core, as a separate galaxy but with the same redshift. Even on the Sloan image, I can\'t see it as anything different than many other such star clouds in the area. The galaxy is in southeastern Canis Minor about 470 million light-years distant.

The UGC says of it: \"Strongly deformed spiral pattern, bright arc in northwest, eccentric nuclear region, no disturbing object visible.\" The bright arc being the heavy arm in Arp\'s terminology. While there is no \"disturbing object\" in the area the galaxy is part of ZwCl 0806.8+0514, a cluster of 220 galaxies in a medium compact cluster some 73 minutes of arc across according to NED. The cluster is centered about 5 minutes south of my image\'s southern edge. That means my image is well within its boundaries covering only part of its northern region. With that many galaxies, it wouldn\'t surprise me if one wasn\'t the cause of IC 498\'s apparent indigestion from eating it.

IC 498 was discovered by Rudolf Spitaler on November 11, 1888 apparently using the 27\" refractor at Wein University in Vienna on November 11, 1888. He found 64 IC objects while at the university, most of them from 1891 to 1892. Though 54 are galaxies, one, IC 1470, is an emission nebula. The rest are dubious at best. One is a single star, four double stars, two triple stars, yet another a quadruple star and the last can\'t be identified with anything in the sky. Seems he was a bit over anxious to find objects. In fact, it was a race between astronomers of that era to find these objects. IC 1440, his only emission nebula, was discovered by Barnard only one day later. In the pressure to find one before someone else, it seems on nights of less than ideal seeing stars became deep sky objects, especially when in tight groups of two to four. A single star at the magnitude limit for the night can also create the illusion of an extended object. Even today\'s photographic searches make mistakes, just not as obvious as those of the days of visual astronomy.

Speaking of conditions they were awful for this one. I tried on three different nights, all of which were of 3.5\" seeing or worse. While the third night was better for seeing transparency was awful. I ended up including 9 of the luminance images taken as including just the 4 from the best seeing night didn\'t go very deep at all. By including even those down to 4\" seeing I managed to get my usual depth but at the cost of resolution. I used the three best of 6 color frames taken those nights for each color. I threw out those of such poor quality they added only noise to the final result when included. 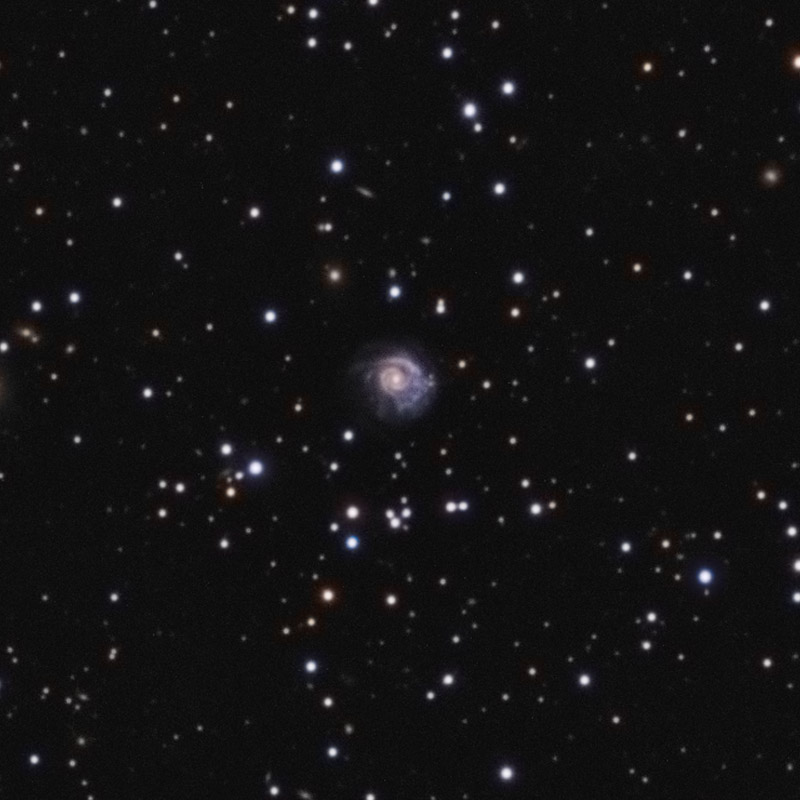 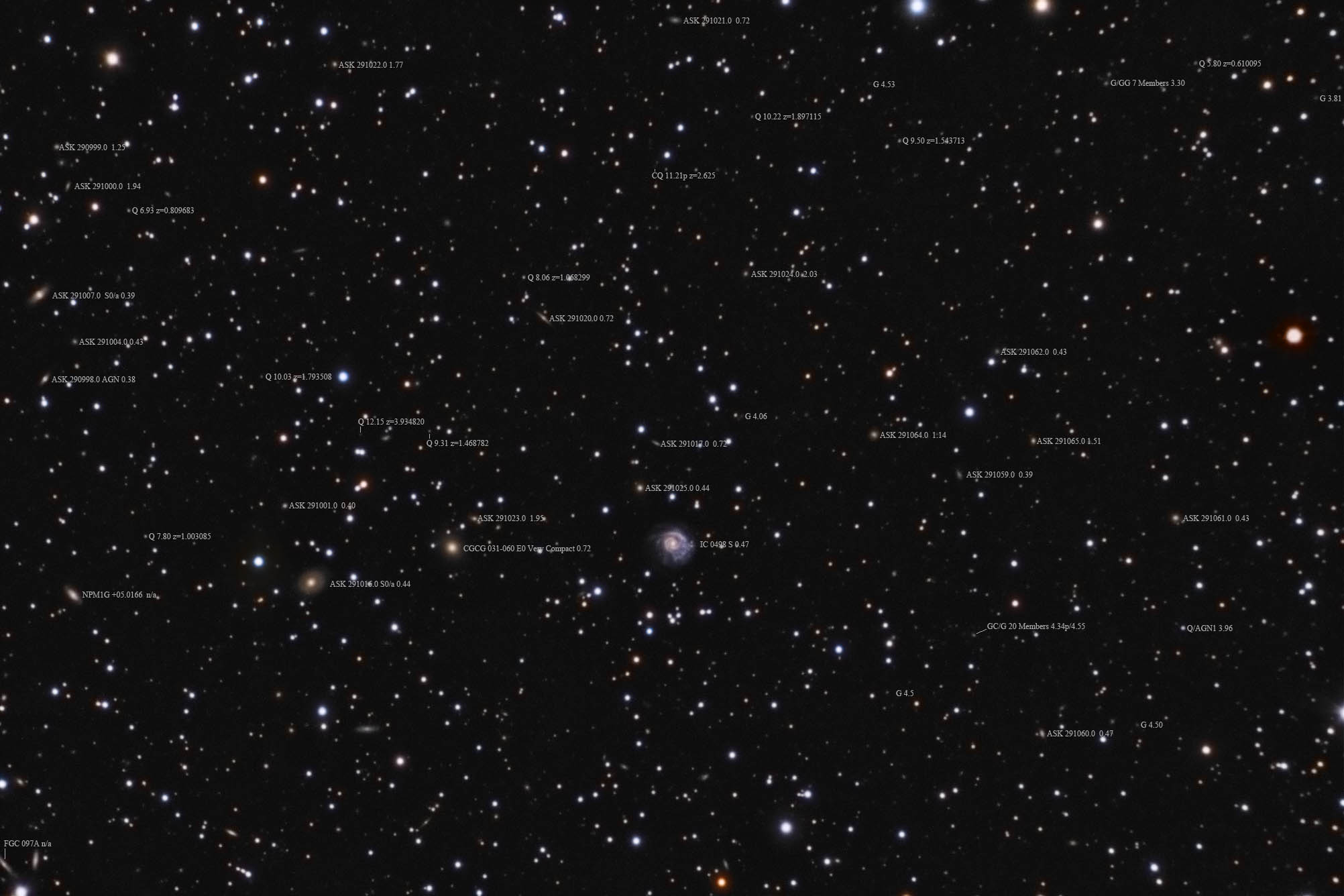 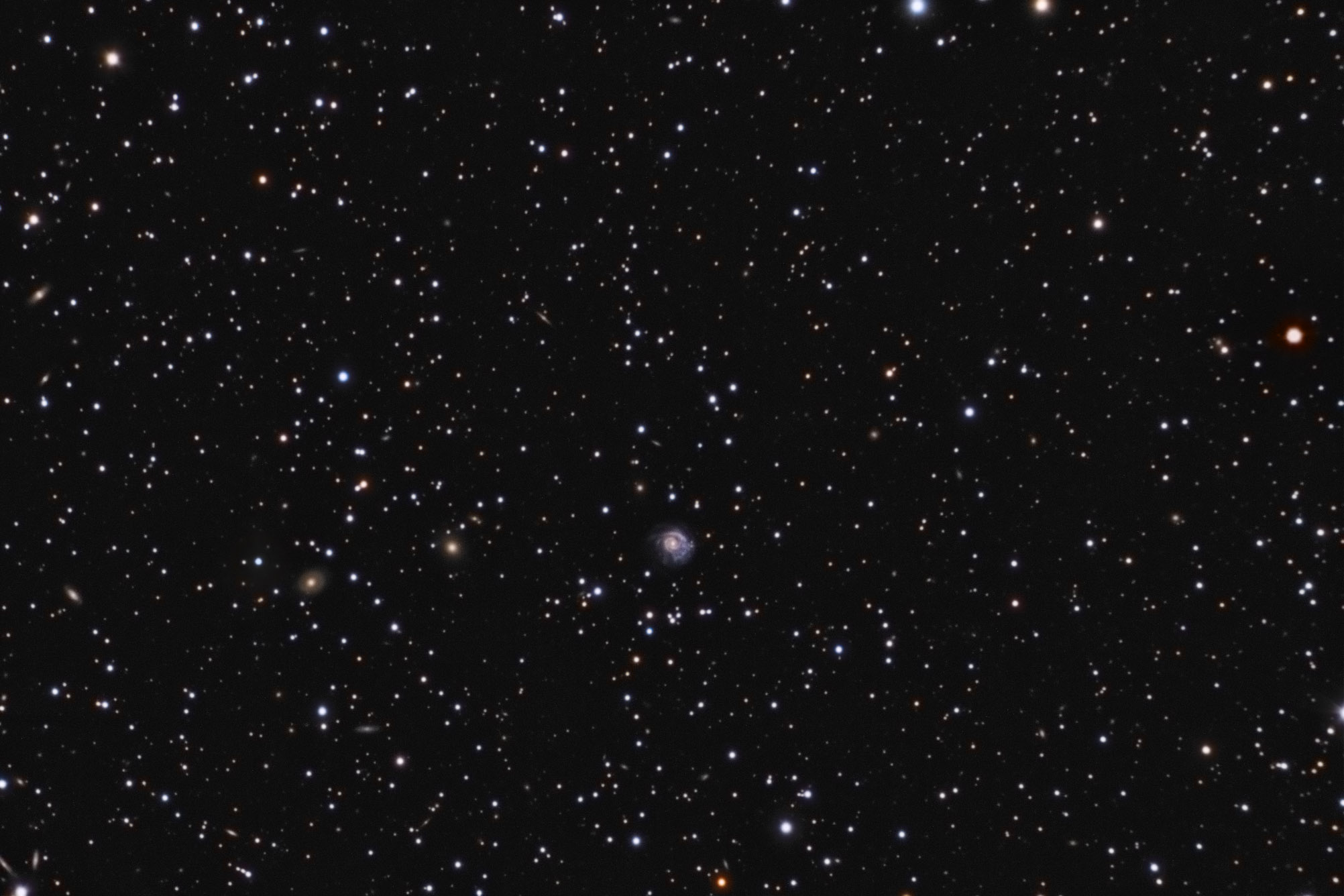