IC 0528 is the main galaxy in the HCG 36 4 galaxy group. Hickson chose his compact clusters by their appearance on the Palomar Observatory Sky Servey images. They had to meet his criteria for being compact, having at least 4 galaxies whose brightness had to fall within a rather tight range. Note they didn\'t have to be a true group by distance. Only that they appeared compact from our line of sight. This is a good example with 2 of the four having a distance of about 710 million light-years, another 400 million and the most obvious, IC 0528 is only 190 million light-years distant by redshift. A fifth galaxy looks like it should have made the group but was too faint to make the cut. Oddly it is about the same distance of IC 0528 so by distance there are 2 galaxies at about 710 million light-years, two at about 190 to 180 and one in between at 400 million light-years. Still, as seen from our location in space they appear close together though by size it would appear 4 are about the same distance with IC 0528 being much closer. Actually, by redshift, the smallest is the closest.

What I find interesting about IC 0528 and why it went on my to-do list is the outer ring appears to be in a different plane, tilted with respect to the inner part of the galaxy. Is this real or an illusion? If the latter it is a darned good illusion. I found nothing in the literature on this.

The group is located in western Cancer a half degree from the ecliptic. This explains why there are 5 asteroids in the image. While they aren\'t confined to the ecliptic like the planets they do all cross it and the majority never stray more than about 15 degrees from it. So when imaging near the ecliptic, expect to pick up asteroids.

The field is full of distant galaxies. I\'ve shown the redshift distance to all which NED showed a redshift value. They are very tiny, star-like, faint objects. You may need to enlarge the image to see those down in the 23rd magnitude range. But there are two that don\'t fit. On the far right about the middle of the frame is a near 23rd magnitude galaxy only 59 million light-years distant rather than 4 to 6 billion light-years the others are. It is a really tiny dwarf galaxy. I measure its size at 1,200 light-years. Now that\'s a dwarf galaxy! Or the redshift is very wrong. The other misfit is in the upper left corner. There you find what I\'d have said was a nearby, blue, dwarf galaxy. Problem is NED puts it at nearly 7 billion light-years distant. Farther out than any other galaxy in the image, all of which are near star-like points. At a z of 0.813, it would be severely reddened yet is blue. Stars blue enough to survive such a redshift would be very short lived. To have an entire galaxy that way seemed beyond belief to me. Also, its size would be over 600,000 light-years in size. Something appeared very wrong. Then I noticed an \"essential note\" at NED. These are usually of no interest. They sometimes carry a different redshift than NED reports but doesn\'t think correct. It gives a distance of only 400 million light-years. That gives a size of 35 million light-years. Now everything makes sense. Why NED chose the obviously questionable redshift over the apparently correct one I don\'t know. It sure had me going for a while.

There are a few galaxies I\'d like to know a bit more about. I labeled one edge on, the apparently flat galaxy at the top, toward the left edge but couldn\'t give it a distance estimate. You\'ll see others but like the one I labeled, they only have positional names and not much more at NED so I didn\'t label them. The image was getting rather cluttered as it is.

The naming citation for the one named asteroid reads:
(37044) Papymarcel = 2000 UE29
Marcel Alphonse Merlin (b. 1922) is the father of the discoverer. Now celebrating his eightieth birthday, he was the principal artisan in the construction of the discoverer\'s private observatory. 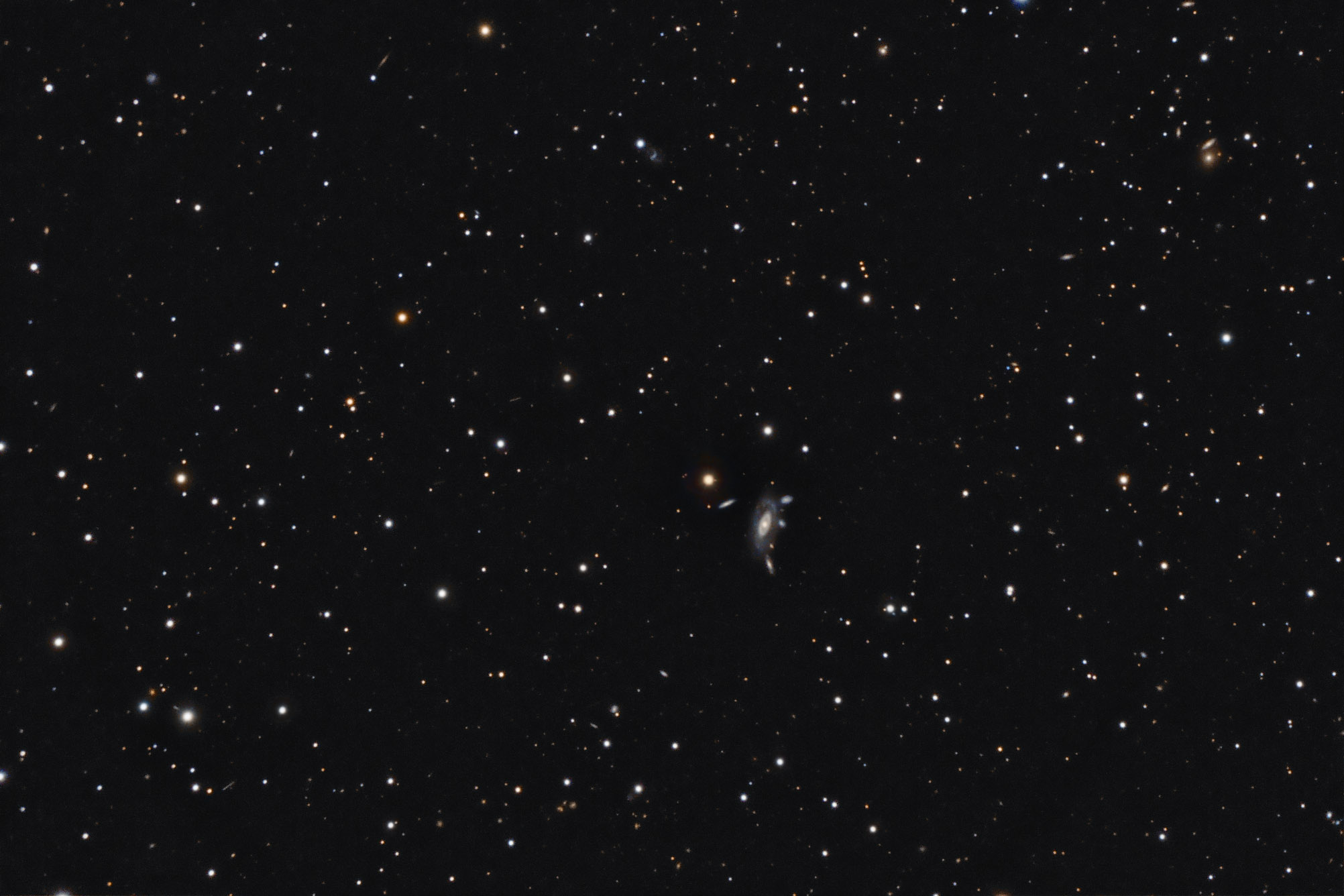 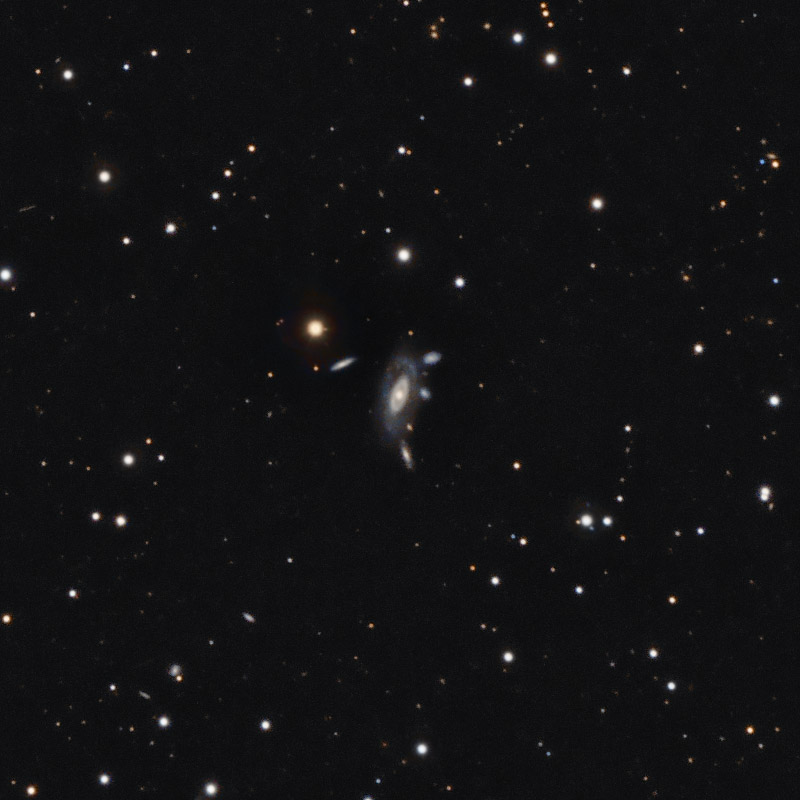 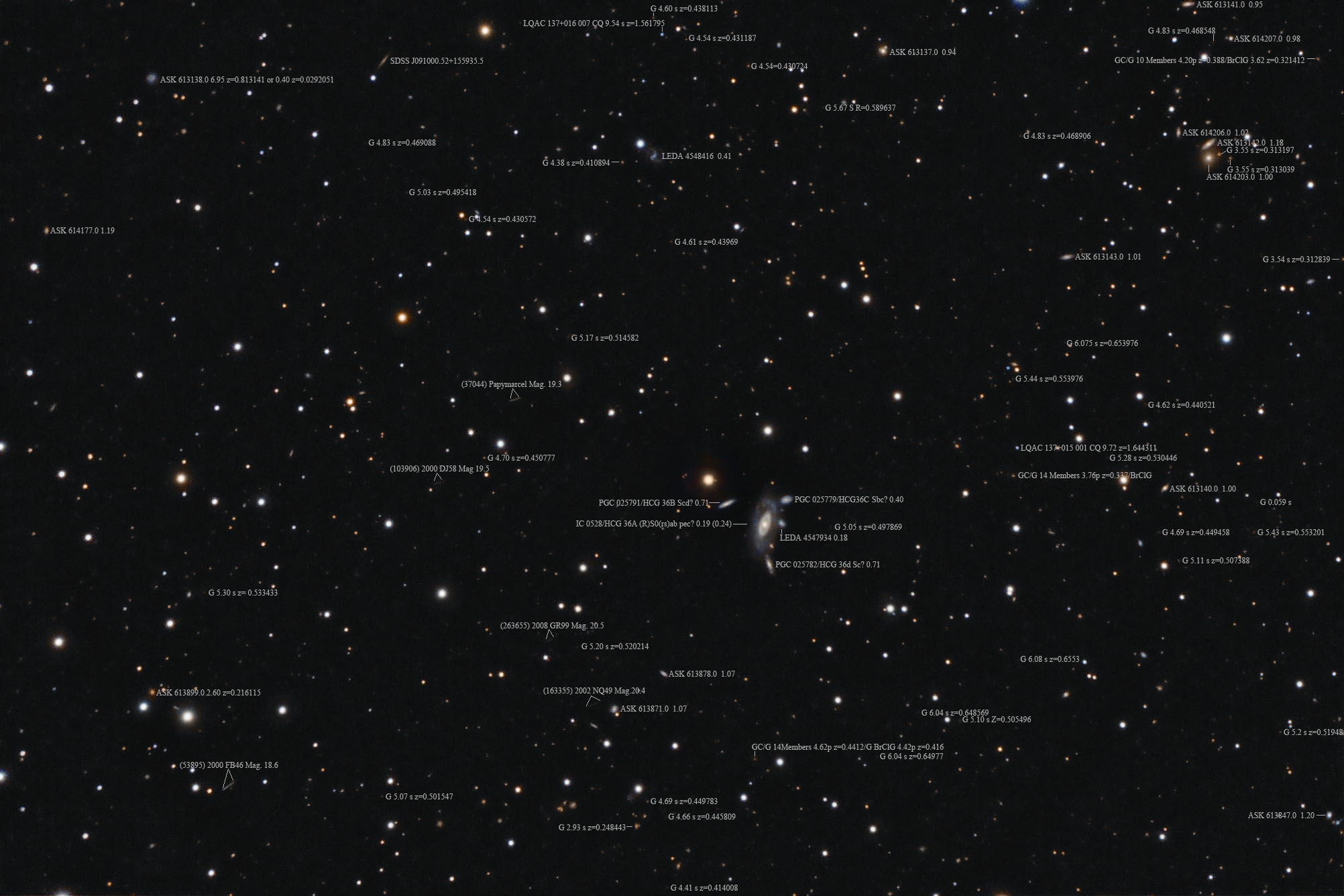