IC 592 and IC 593 are the largest galaxies in a group of galaxies about 300 million light-years distant in central Sextans. IC 592 is classified as Sbc and SABc? by Seligman. I can\'t say I see the bar. Assuming its distance is 290 million light-years which is what its redshift says, it is about 76,000 light-years across. It was discovered by Stephane Javelle on March 21, 1893 and is #665 in his catalog. Rather typical in size for a spiral but its arm structure isn\'t all that typical. It has two major arms and a rather odd arm segment on the eastern side. The two main arms are full of blue star clouds. The brightest is on the far eastern edge of the arm segment and looks almost like a star in my image. Unfortunately seeing was very poor when this was taken. It was put back onto the retake immediately list but weeks of clouds forced me to work with what bad data I had. Not only that but the 7.5 magnitude K5 giant star just to the southwest cast a huge red glare over most of the image since this was taken through rather dense, high clouds. More on conditions in a bit.

IC 593 to the east was discovered the same night by Javelle and is #666 on his list. With its even stranger arm structure, I\'d say was devilish to explain but considering it\'s number in his catalog I won\'t. Still, it is odd with the one arm coming off the oval ring around its core. NED classifies it as S? while Seligman says S(rs)bc?. To my eye in both my image and the Sloan image it appears to have a faint vertical bar but since no one includes it in the classification it might be an illusion. Redshift puts it also at 290 million light-years. I measure its size as 65,000 light-years. I measure its separation from IC 592 at 309.7\" of arc in my image which gives a minimum separation of the two of 435,000 light-years. Close enough I\'d expect to see some hints of interaction. That may explain the pulled out north arm of IC 593. Likely they are somewhat further apart with one being more distant than the other. How much more is the question.

Scattered across the image are many other, mostly dwarf galaxies at about the same distance as these two. Also, a third large member is well out of my frame to the east. There was no way I could fit it in without leaving out the other two.

In making the annotated image I ran into a lot of odd apparent errors in the positions of some galaxies. Often there real position was well outside the error bars sited at NED. An example is LEDA 1093733 to the north. The position at NED points to a star that is at the southeast end of the galaxy. Since that is what NED points to and says is accurate to 0.5\" I\'ve drawn a line to the star. But NED gives the size as matching that of the fuzzy galaxy rather than the star. Several others with no excuse such as the star, in this case, are in the image. For example, LEDA 88605\'s position in NED was a supposed to be accurate to 2.5\" but was about 10 seconds to the north where nothing is located. Putting the coordinates into the POSS server or the Sloan server shows the error quite clearly so it isn\'t just my measurement which is often accurate to 0.01\" for point source quasars.

As mentioned conditions were awful for this image. My system first took it to the east of the meridian then to the west until clouds totally shut me down. Out of some 30 frames taken I used the 4 best luminance images. Color frames were so bad I could only use one of each color even though at least 4 were taken for each. Red was really a problem in that the high clouds sprayed a wildly variant red gradient across each red frame. I choose parts of 3 to make a single pasted together frame. Green was so weak as to be unusable. All I could do was use it as a framework to create a pseudo green frame. Add to this that seeing was 3.5\" to 4\" this image came out better than I expected. Though the very bad seeing created some wonky shaped stars. Probably partly due to tube currents as I never expected to get anything this night I\'d not opened the roof to cool things down and began the first luminance frame only 5 minutes after opening the roof. That always creates some tube currents distorting star shapes. 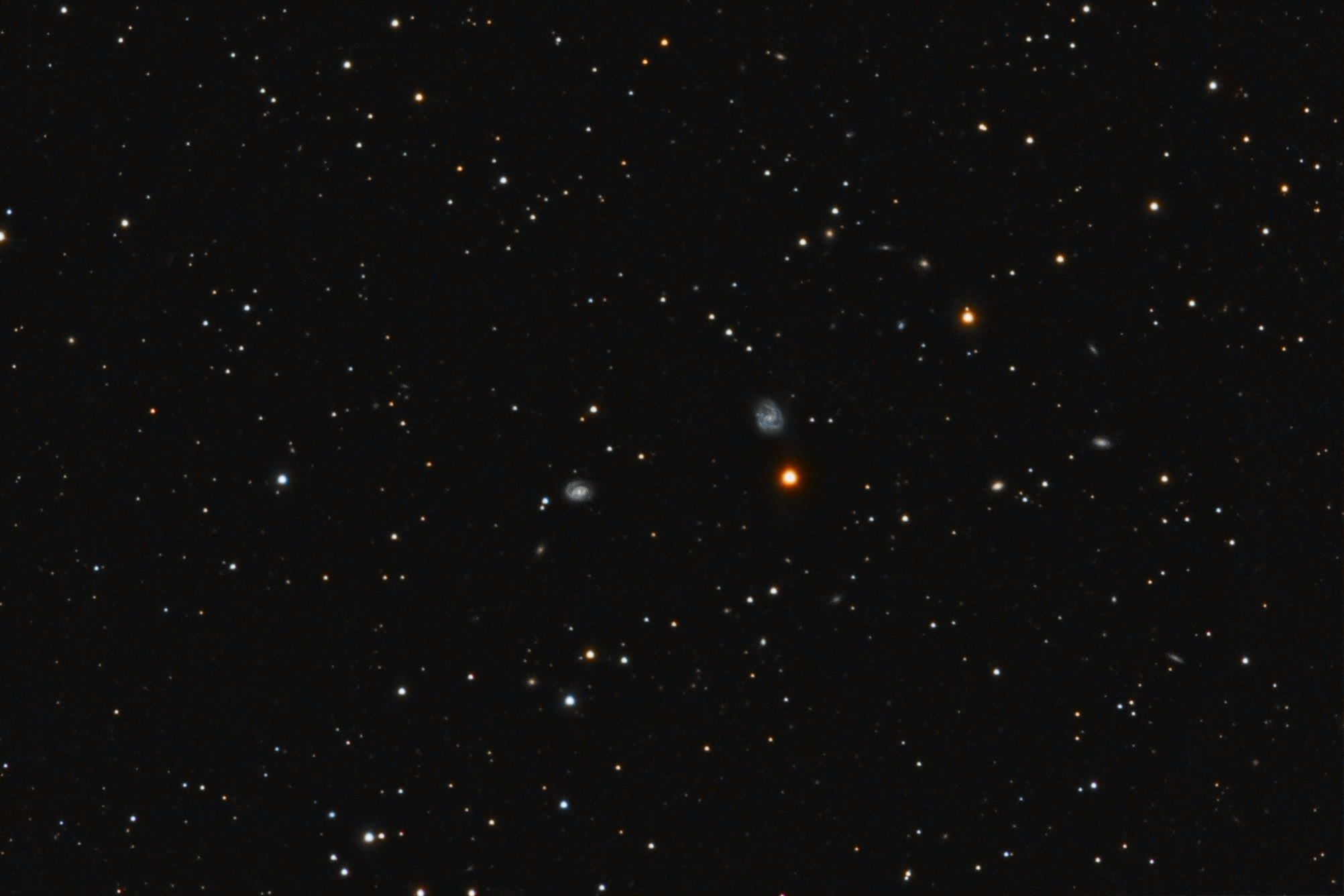 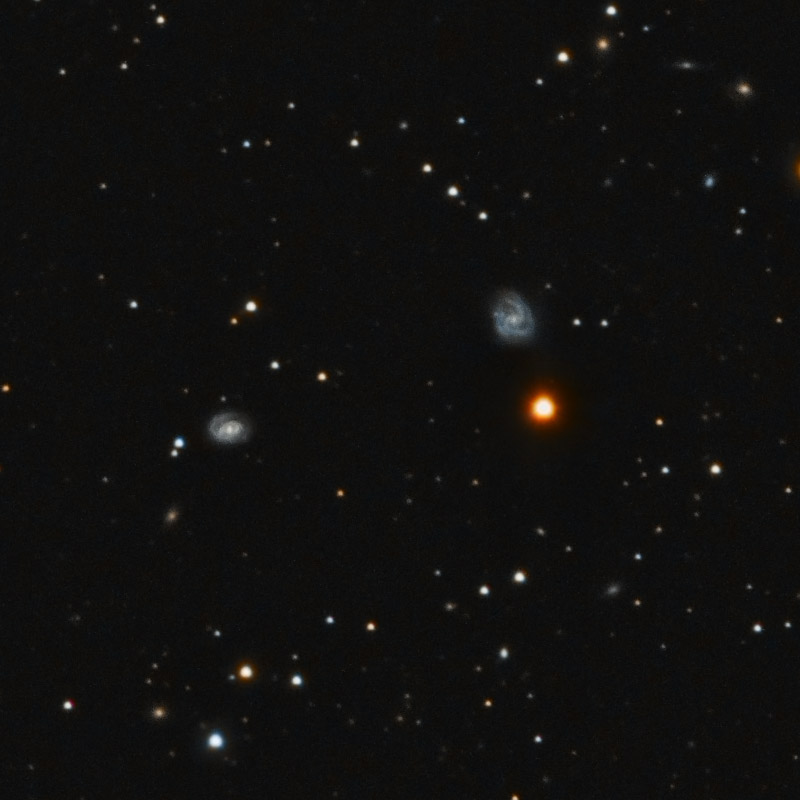 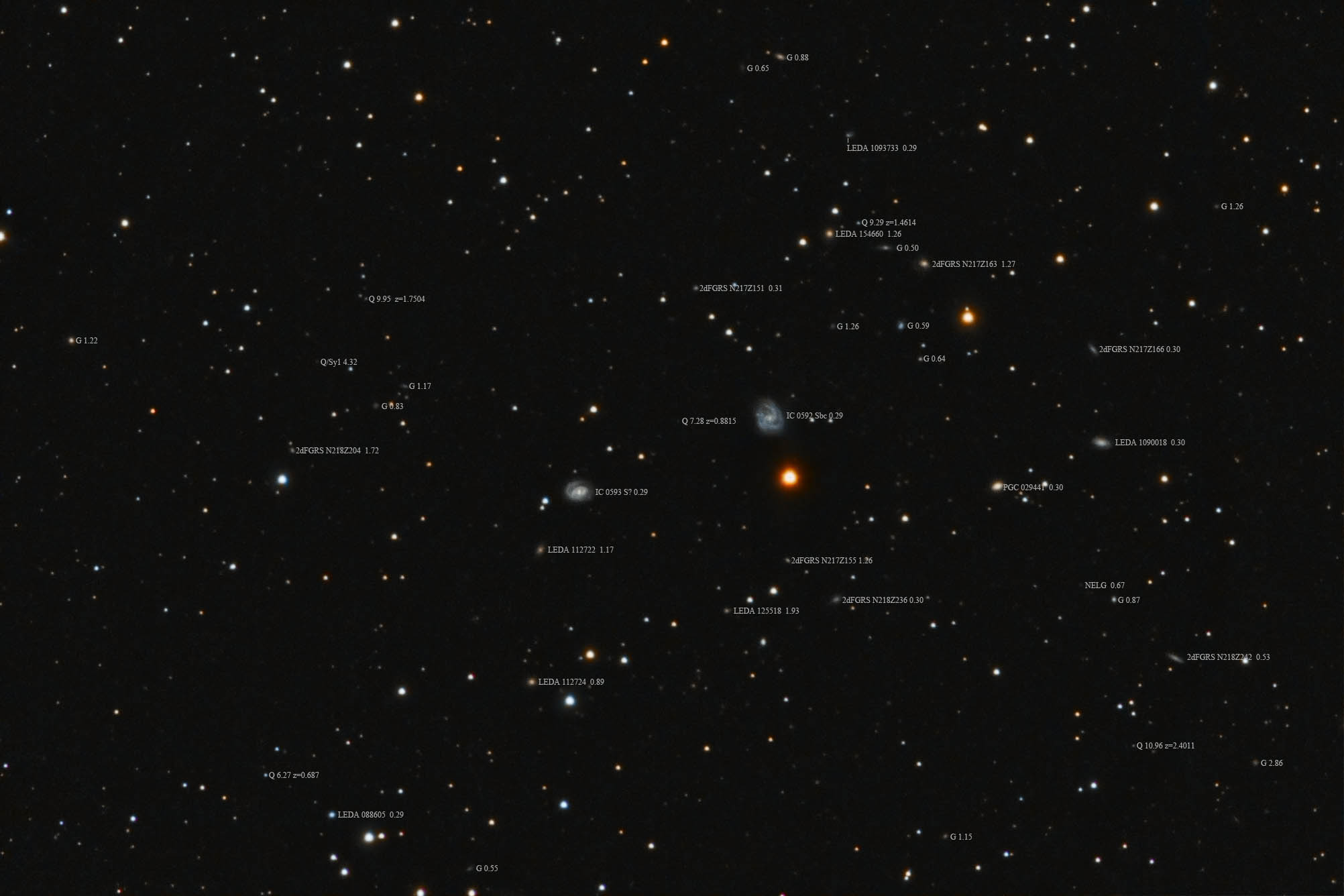