IC 603 is a ring galaxy in Sextans about a quarter of a billion light-years distant. It is classed as (R)SB(r)a: so is a barred spiral with two ring structures, and outer and inner ring. The outer one is very slightly blue while the inner one quite red. At about the same redshift and thus likely about the same distance is MCG-01-26-040 another galaxy with a ring like structure though that isn\'t mentioned in its classification system. It is listed as simply SBa. I\'d say SB(r)a as the arms off the bar form a pseudo ring in my image at least. This is an area of the sky not covered by the Sloan survey so I expected to find little on the other galaxies in the field but was pleasantly surprised to find it seems rather well covered. While many of the galaxies are listed only by their positions in various catalogs some have catalog names that aren\'t just coordinates. Those are listed by their LEDA number or other designation when available. It was discovered by Stephane Javelle on April 10, 1893.

There are three asteroids in the image, all quite faint as this image doesn\'t go as deep as most and was severely hurt by poor seeing. Even after rather strong deconvolution (for me) the stars are pretty fuzzy. This is because a cold front was rolling in. The front caused other problems besides poor seeing. The temperature dropped 10°C during the exposures. This sudden rapid temperature drop of course caused the poor seeing but it also sent the ambient temperature plunging below my camera\'s cooling setting which was -40C The last luminance frame was unregulated. I tried many different scaling factors but never could get a clean image. It hardly mattered because the sudden drop also created a nasty tube current. The Luminance was taken last which was when the temperature plummeted. The first luminance frame had nice round stars. They were slightly wonky in the second frame and by the third had horrid tails coming off a flat bottom. The fourth frame as very severe with these tails. I\'d likely not used it even if the temperature had been regulated. Note this was taken in early March and we were still getting temperatures below -40°C. What a winter. Anyway I didn\'t know of this problem until I went to process it months after it was taken and too late to retake the luminance. I tried pseudo luminance using the color frames plus two luminance frames but that cost even more faint detail so I went with the flat stars that leaving in the third luminance created. While the bottoms are flat the image was inverted so the flat side was the top when taken, right where the hot air went, if you can have \"hot air\" at below -40°C. The combination of only three frames and bad seeing really limited how faint I could go with this one and how much processing I could do to pull detail out the galaxies. Another for the reshoot list that likely will never be retaken due to so many first time objects still on the list. 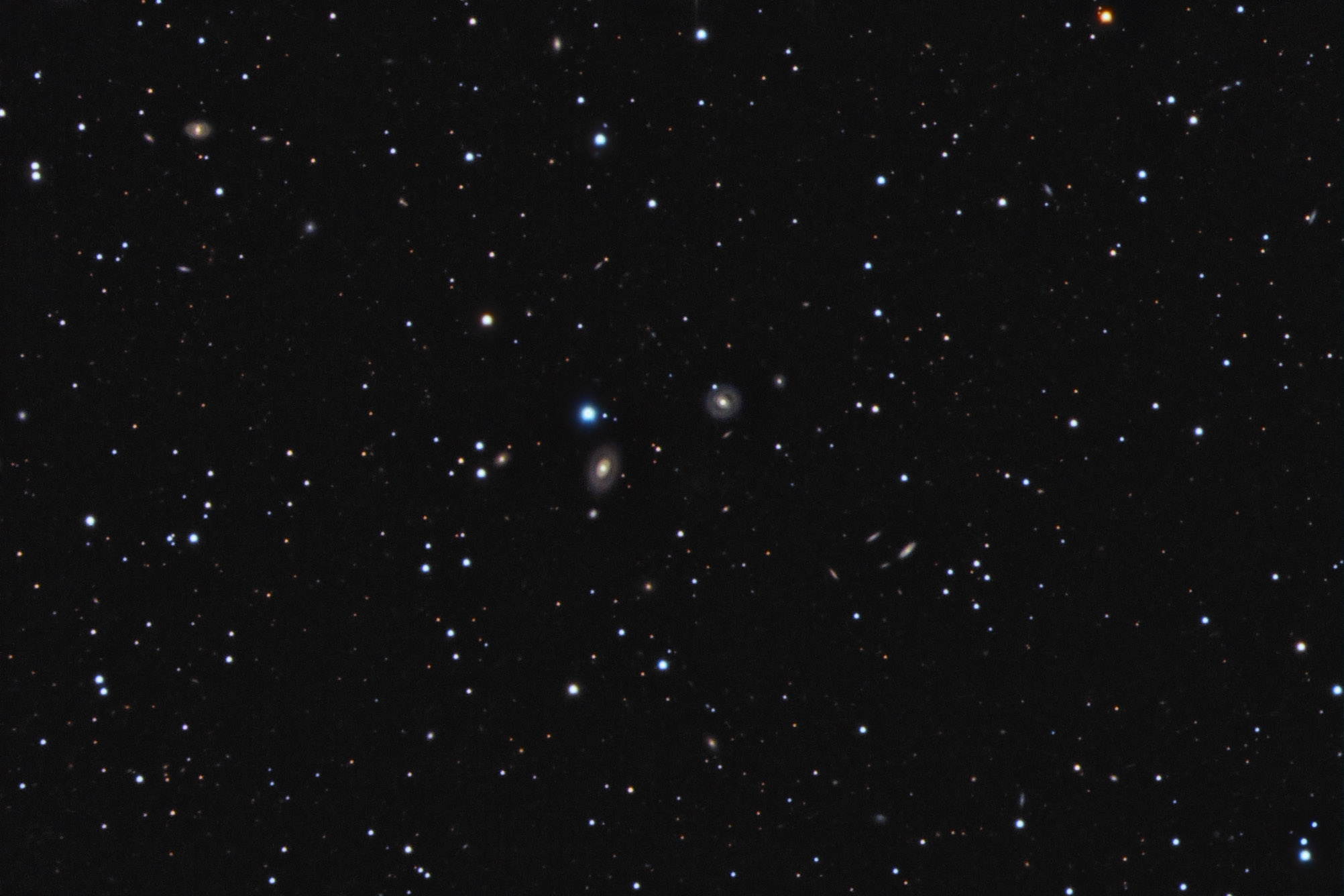 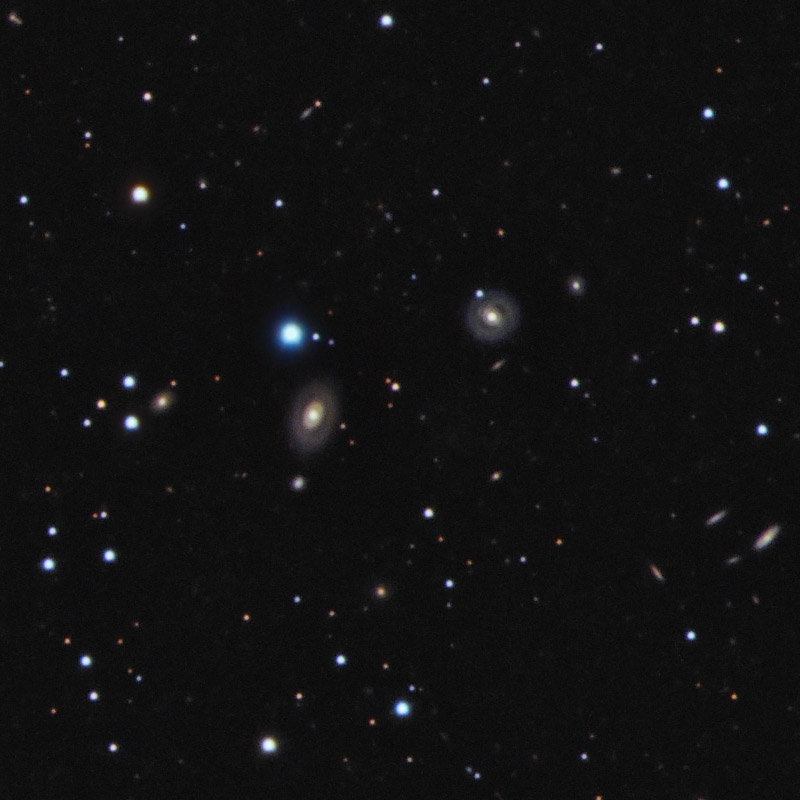 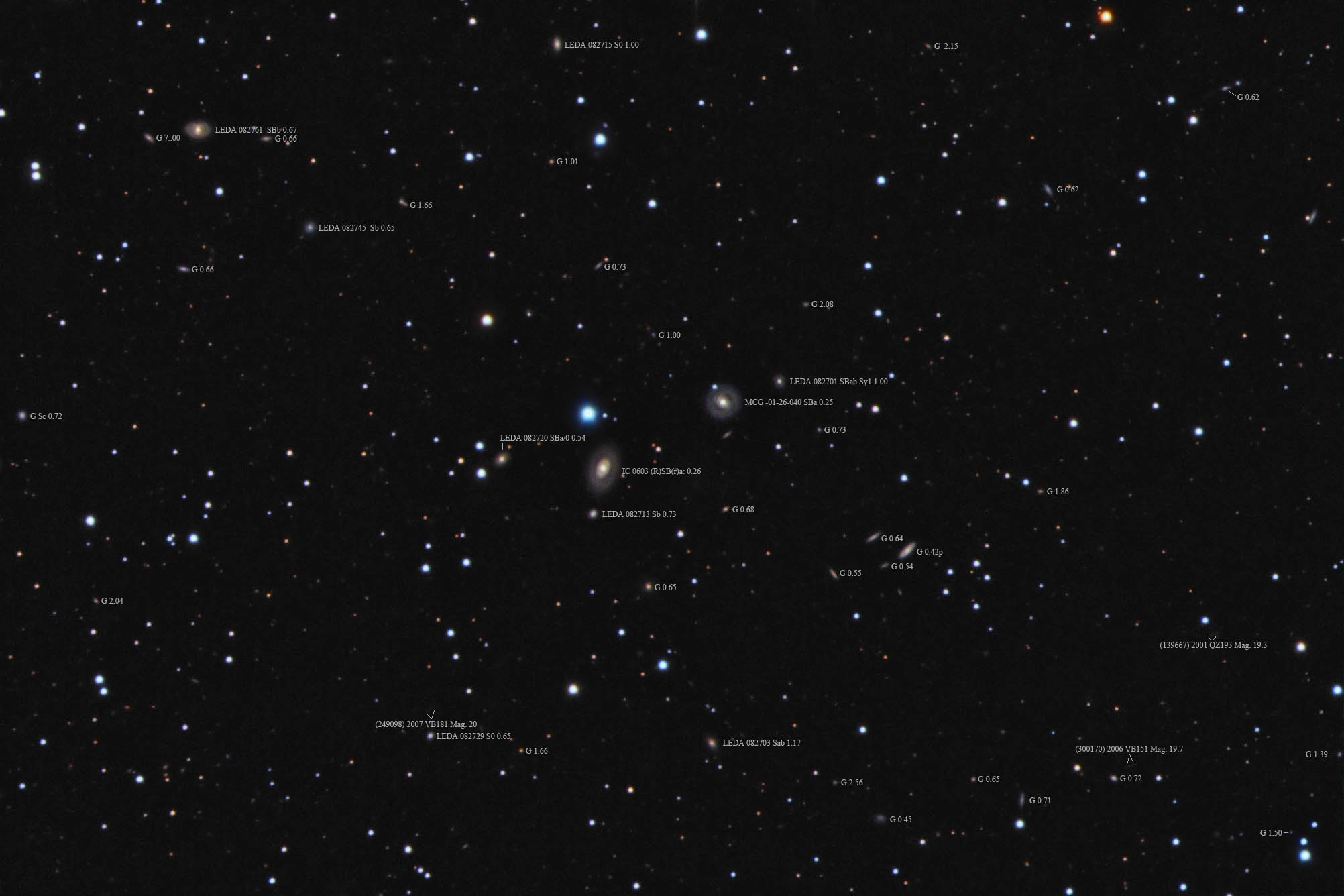