IC 1613 is important as it was used to calibrate the cepheid yardstick. Cepheid variable stars have a brightness that is directly related to the time it takes them to go from one maximum brightness to the next. By measuring this we know its true brightness. Compare that to its apparent brightness and you have a direct measure of its distance, once you allow for confounding factors like dimming due to dust. The problem is no cepheids are close enough to us for us to know their real distance by trigonometry though Hipparcos has now helped the error bar is still rather large. Cepheids are known as standard candles as they shine with a known brightness. There are other types of standard candles. Many of these could be seen in this galaxy along with Cepheid variables. This allowed early astronomers to finally calibrate the Cepheid \"standard\". Since Cepheids could be seen out a lot farther than this, galaxy this allowed astronomers to estimate the distance to many more galaxies. Now after all of this, you\'d expect the distance to this galaxy to be known very well. Maybe it is but I found no two sources that gave the same distance. SEDS gives a distance of 2.9 million light-years (a bit farther than M31, the Andromeda Galaxy), another source gave. One rather new paper I found pegged the distance at 2.38+/- 0.07 million light years. That\'s a bit closer than M31 Since it gives an error bar that is rather small I\'ll assume that is about right. It is located in Cetus the whale so nowhere near M31 in the sky and unrelated to it. But its location put it out over the lake and not all that high up when I took this shot. It was taken one of the few \"clear\" nights we have had in early December. But being over the lake the sky is full of ice that reflects starlight. Some is deflected directly to the scope, but the worst part of the glow comes from starlight reflecting off the lake\'s huge white surface and going back up to hit the ice. That backscattering is very bright raising my noise level by a factor of 10. I might as well be imagining with a bright moon in the sky. By using 7 luminosity frames rather than the normal 4 I reduced this noise some but it was still a big problem and was about 4 times normal even after using the extra frames. Still, I was able to image a few of the HII bubbles in this galaxy. In shots taken at major observatories, you see bubbles all over the galaxy. Due to the ice, I only got a few of them. The SEDS article is at:
http://www.seds.org/~spider/spider/LG/i1613.html

At least my shot came out a heck of a lot better than the shot they used. It was discovered by Max Wolf in September 1906.

Note the many distant galaxies are seen through and around this dwarf galaxy. You\'ll note the stars are a lot fuzzier in this image. My seeing in winter is really bad, especially when there\'s ice in the air. By working high overhead I can get better stars but unfortunately, most objects don\'t cooperate by being high in the sky. When the object is down near the celestial equator the blur begins to get really bad. Unfortunately, that\'s where this guy is.

This is a very early image of mine. It was taken when I had poor technique and when my processing tools and skills to use them was limited. This is yet another that I need to retake but so far the skies haven\'t cooperated. 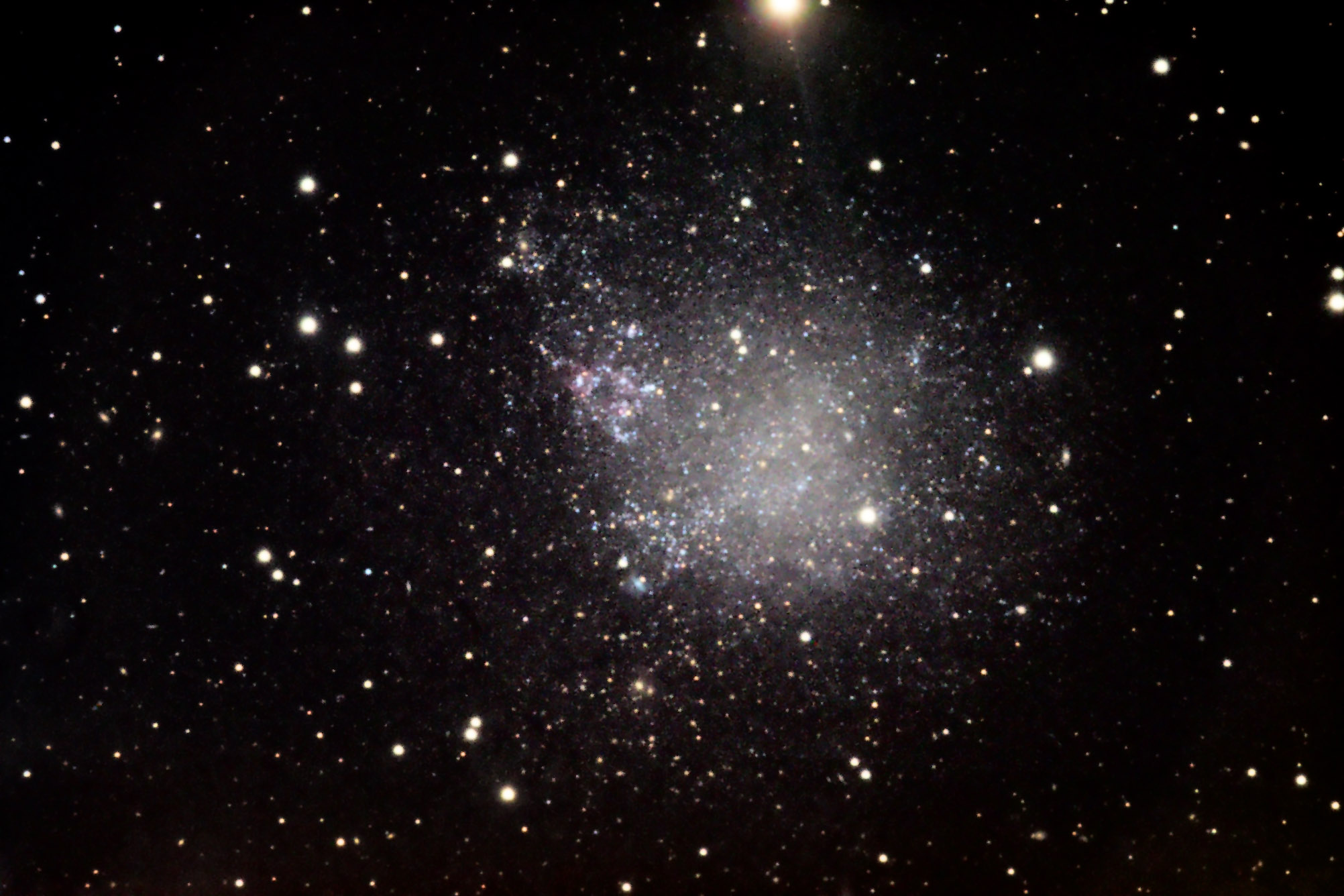