IC 2248 is a spiral galaxy that reminds me of M94 and other galaxies with an outer ring that usually appears detached from the inner structure. In this case, there seems to be a red dusty area between the two so it isn\'t as detached as M94 and the others. A note at NED says \"Elliptical red object with a faint satellite.\" Apparently, they are seeing it as an elliptical galaxy. NED doesn\'t try to classify it. I assume the faint \"satellite\" is SDSS J081605.62+230814.4 as it is the brightest of several galaxies apparently seen through the faint outer ring. I\'ve annotated several others. I covered one up with a label so won\'t try to point to it. But is it a \"satellite\"? There\'s no redshift data for it so no way to know. More likely it is the brightest of many distant background galaxies.

East of IC 2248 is the blue spiral KUG 0813+232, though again NED fails to try and classify it. The only note at NED says it is \"diffuse and irregular\". Yet its spiral structure is very evident. It is also peculiar in the sense the arms are very unequal with the northern one at first appearing short and stubby but a closer look shows it to continue as a faint arm halfway around the galaxy and thus much longer than the south arm. That arm has a sudden kink to the right. It would appear it has interacted with something. IC 2248 has a similar redshift so could be the culprit. Is that why IC 2248 has that ring?

IC 2247 is the edge on spiral to the northeast of IC 2248. Its redshift is virtually the same as other two though when rounded to 2 significant digits as I do in the annotated image the difference appears slightly larger than it really is. NED classifies it as Sc one place and Sbc another. With an edge on like this classification is very difficult so the two aren\'t all that surprising. Its disk appears rather reddened with only a hint of strong blue at the very tips. The core appears rather reddened by dust. Maybe the rest of the disk is as well.

Both galaxies were discovered by Max Wolf on January 9, 1901.

There are two asteroids in the image. The brightest is (47002) Harlingten at an estimated magnitude of 18.5. The naming citation reads: \"Caisey Harlingten (b. 1947) is an amateur astronomer interested in various scientific projects. With a keen interest in exoplanets, he is developing astronomical instrumentation in northern Chile.\" The other is (64814) 2001 XM227 at an estimated magnitude of 19.5. Both are noted on the annotated image.

On most prior annotated images distant objects were only noted with a G for Galaxy and Q for quasar followed by their distance in billions of light-years. Many have asked for full identification. This makes for a very messy image with little added useful information for most though those interested in something I\'ve passed over can always email me for the identification. Having it on the image would save that step. Considering how few times this happens I\'ve not felt it worth the effort. I\'ve made an exception with this image as there weren\'t a lot with redshift data. Still, there are a good 1000 seen in the image that I\'ve not labeled with a catalog identification. To do so would be impossible as labels would of necessity cover many galaxies and finding a place for a label nearly impossible after a few hundred. Galaxies are not labeled other than with the catalog name. Quasars and galaxy clusters with a major galaxy are noted with a Q or GC/G after the catalog name and before the distance. Let me know if you want me to do this with future images. Note it is virtually impossible with some images due to the number of objects in a small area to identify. 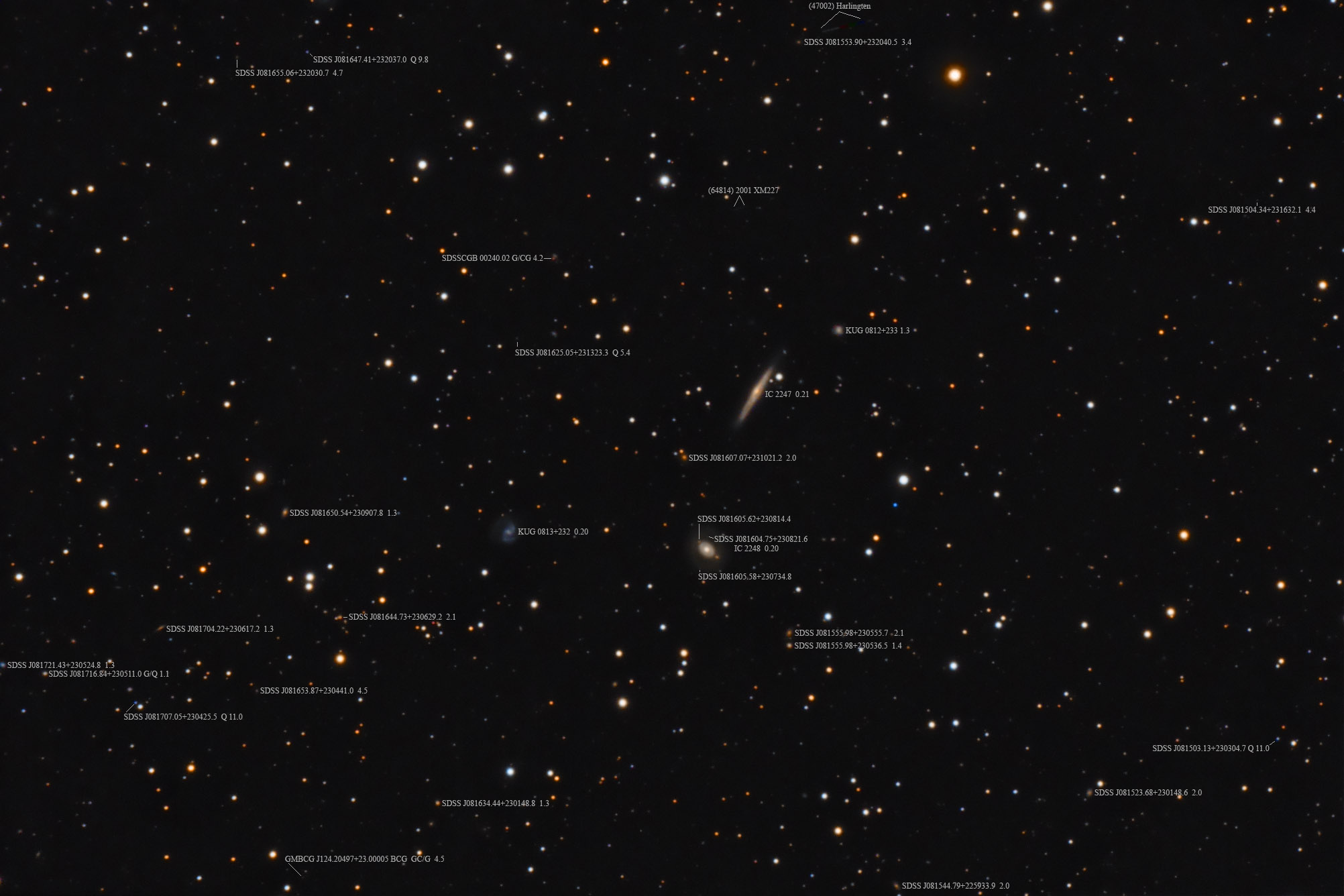 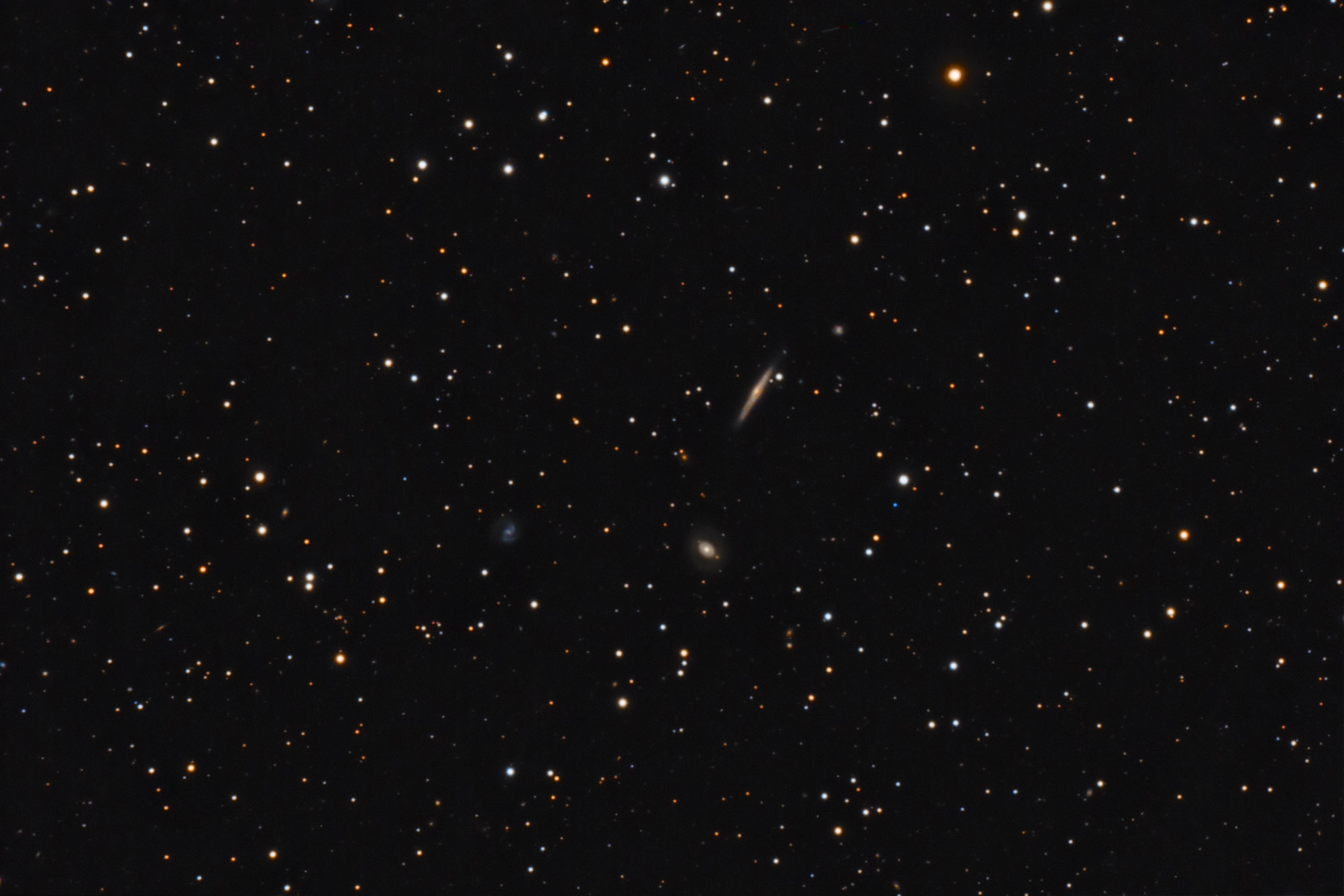 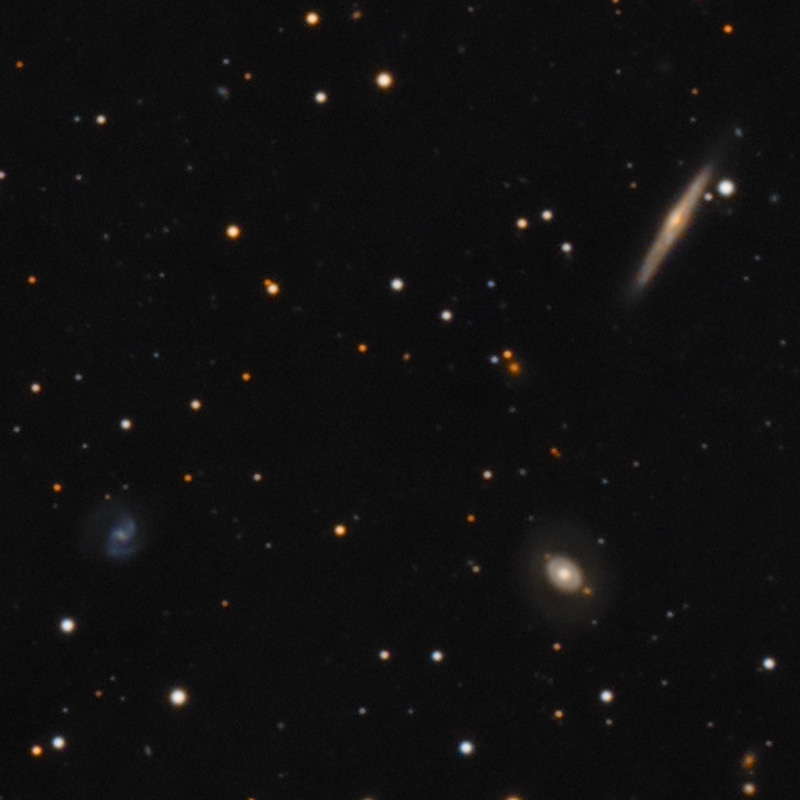