IC 4182. For such a small, insignificant nearby galaxy, it raises one heck of a big stink in the astronomy community. This little guy finds itself in the center of a big controversy over its distance and over the value of Hubble\'s Constant which is the measuring stick of the universe. Change its value and you change the distance to everything in the universe. So getting it right is very important. It is the measure of how fast the universe is expanding. By measuring how fast distant galaxies are moving away from us we can determine the distance. The faster the farther and Hubble\'s Constant gives us the value needed to calibrate this scale.

To determine its value we need to measure the distance to nearby galaxies by an independent method. The main one uses Cepheid variable stars. They vary with a rate that is closely tied to their real brightness. So by measuring the period of the variable astronomers know the brightness. Compare that to the brightness as seen from earth and we can quickly determine its distance. But such variables can only be seen in nearby galaxies. Hubble has determined the distance to this galaxy very \"accurately\" by this method. To determine the distance to galaxies further away we can use type 1A supernova. Most are thought to explode with exactly the same brightness or at least a brightness we can calculate. Thus again we have a \"standard candle\" of known brightness. Compare that to the brightness as seen from earth and we have its distance. To calibrate the two we need a galaxy close enough for Cepheid variables to be seen that also has had a type 1A supernova of known brightness. One of the very few candidates for this is IC 4182. But something is wrong. There are other, more distant galaxies in which both have been seen but due to their distance, the values have a rather high uncertainty. Still, using several and taking an average the result should be fairly good and the two do seem to give similar answers. But if those values are used in IC 4182 the distance by each method disagrees by a factor of 2. Is it 8 million light years away or 15 to 16 million light years?

The answer depends on which method you use. Some of the difference may be due to dust that is lies between us and IC 4182. It would pass the red light of a Cepheid rather well but scatter and dim the light of a supernova. Still, no one agrees how much dust is between us and this galaxy. Latest studies using addition Hubble data seems to favor the dust model and put the galaxy at only some 8 million light years but the debate rages on. Neither side willing to concede. Something like a certain Democratic/Republican Party situation going on here on earth. The detail I resolve in this galaxy would also argue for the closer figure being more likely correct. At 15 million light years those star clusters would have to be massive beyond what I\'d expect in a low mass dwarf spiral like it IC 4182.

After all this NED gives a Tully-Fisher distance of 14 million light-years, about midway between the two camps with an error bar of about 3 million, not enough to reach either. They classify it as SA(s)m. It was discovered by Max Wolf on March 21, 1903. 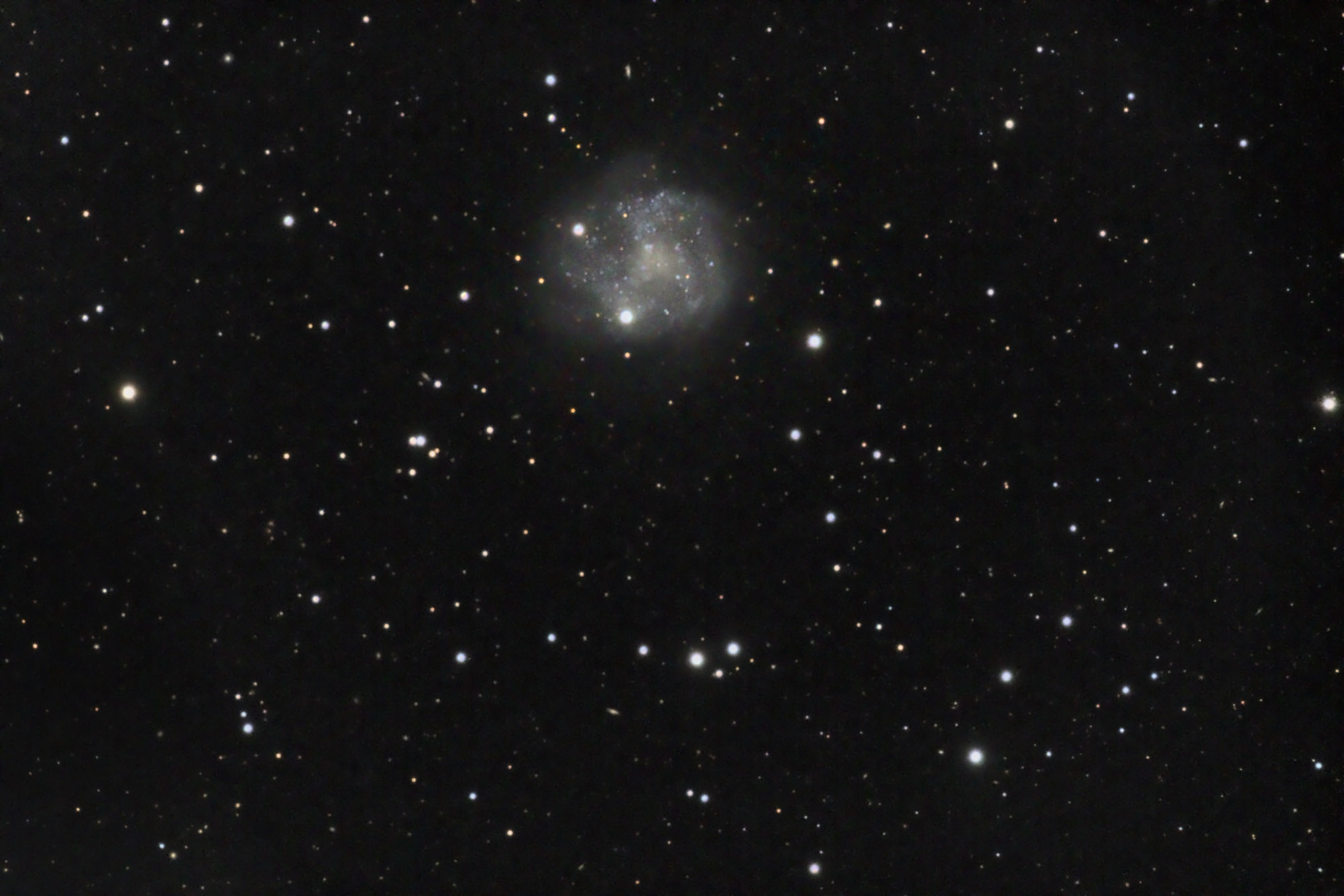