II Hz 4 is a pair of empty ring galaxies. The only pair I\'m aware of, at least in the part of the sky I can cover. If anyone knows of another please let me know. The second empty ring apparently is due to II Hz 4:[RMV2008] R2. They are located in southern Lynx about 590 million light-years away. The core of II Hz 4 is well off center. The second ring appears part of the companion I Hz 4:[RMV2008] R2 to the north. It has a rather normal looking disk shape with core and eastern side. Western side can\'t be seen. It has apparently been drawn into the faint ring that loops up and around. A nasty \"bright\" star makes seeing all this difficult as it casts a glare over the faint ring. Redshifts of both are virtually the same making it quite likely these are an interacting pair.

As you will see in the annotated image, these two are pretty much alone in their spot of the universe. I found no other galaxies within a couple hundred million light-years of them in my frame. Odd how two such galaxies managed to collide so violently with all that space to roam around in. None of the papers on these two addressed this issue.

There are several galaxy clusters in the image. Each is anchored by a Bright Cluster Galaxy (BrClG). I\'ve noted the position of the anchor galaxy and its distance. They contain from 10 to 12 galaxies in an unknown radius. Oddly the cluster distance is slightly different than that of the anchoring galaxy. The difference was small so rather than clutter the annotated image I just used that of the anchor galaxy.

These appear to be part of a much larger cluster ZwCl 0856.6+3710. It is said to have a diameter of 19 minutes (almost the height of my image which is 22.5 minutes) so it covers a major part of the left side of the frame. It is listed as having 104 members but no distance or even distance class. Likely this is because it is just indicating this is a rich part of the sky for distant galaxies rather than they are all gravitationally bound to one center of mass. I\'ve indicated the center position even though there\'s nothing at that location either in NED or my image.

The image contains several quasars out beyond 10 billion light years. When quasars were first discovered they were almost all blue. Thus they were called blue quasi-stellar objects. The hunt was on looking for very blue stars in hopes one was another blue quasi-stellar object. After a while, it was seen many were not blue and the search needed to be extended. Then they were just quasi-stellar objects which was shortened to QSO or quasar. Quasar also became a TV brand of Motorola solid state TVs during the switch from tube sets (but for the picture tube). It was later sold to Matsushita (now Panasonic) and renamed Quasar Electronics Incorporated. But I digress. In my images, some quasars are blue while others are white or even reddish. This is the first one I can recall that all are blue, even the very distant ones. Just a statistical fluke I find fascinating. 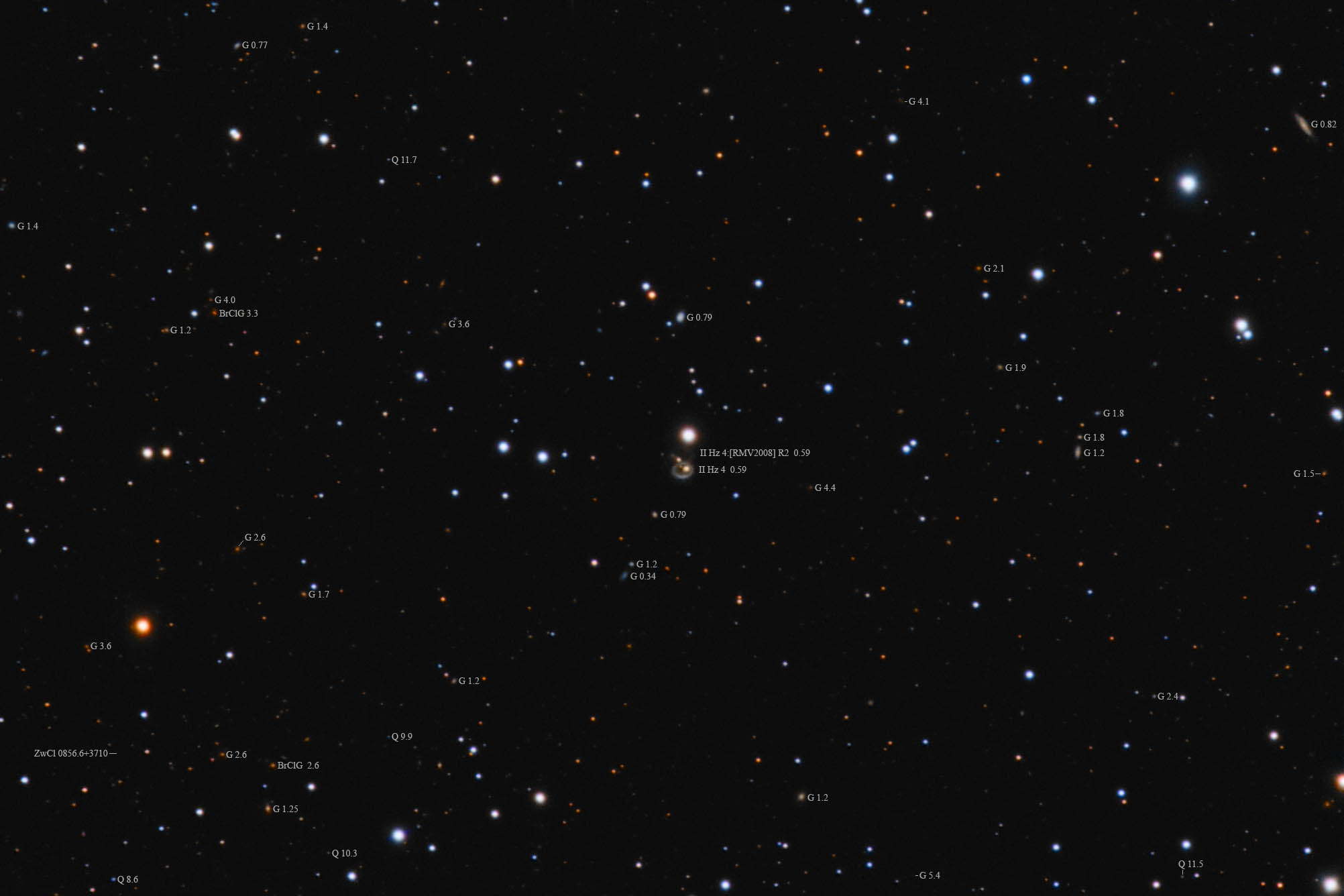 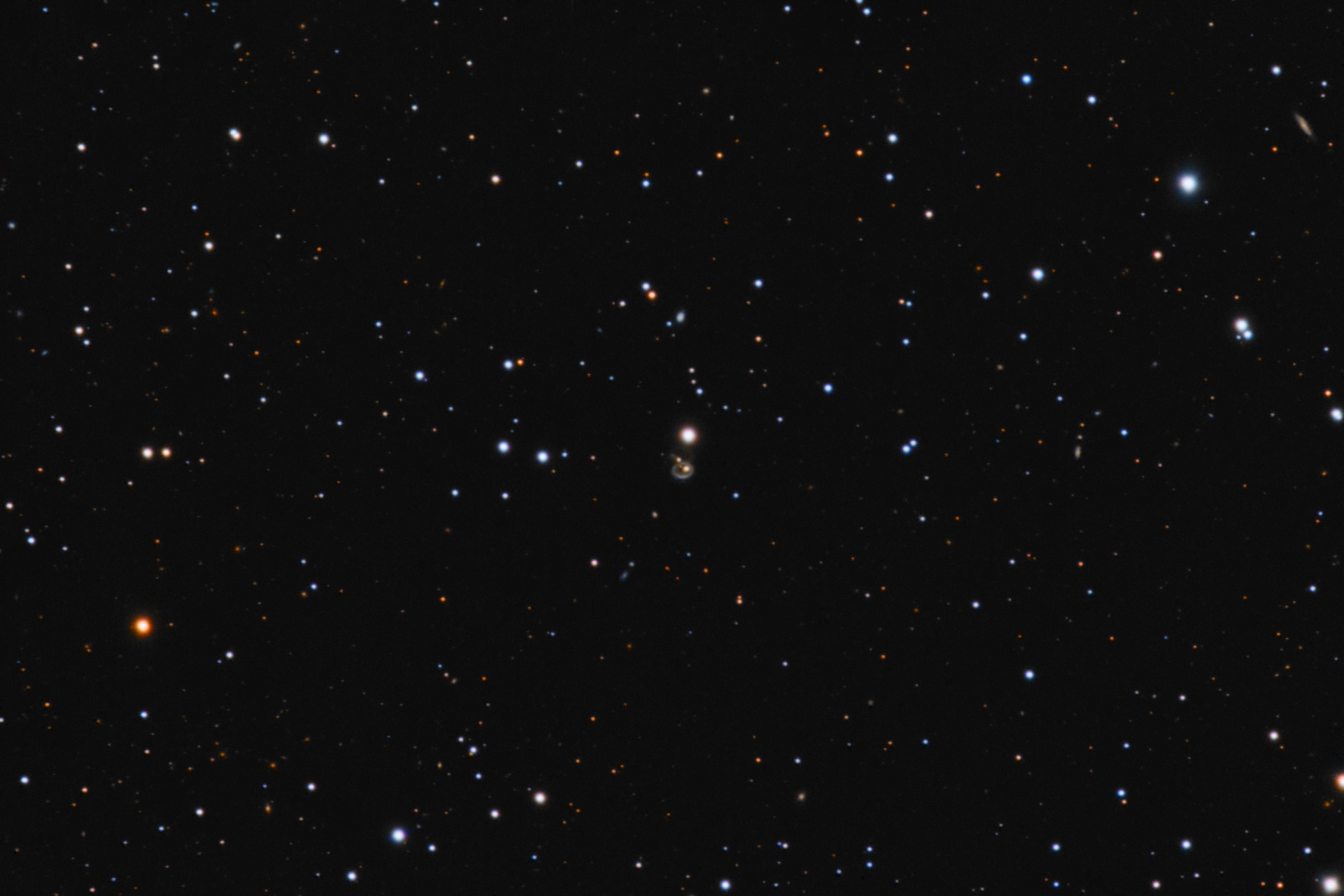 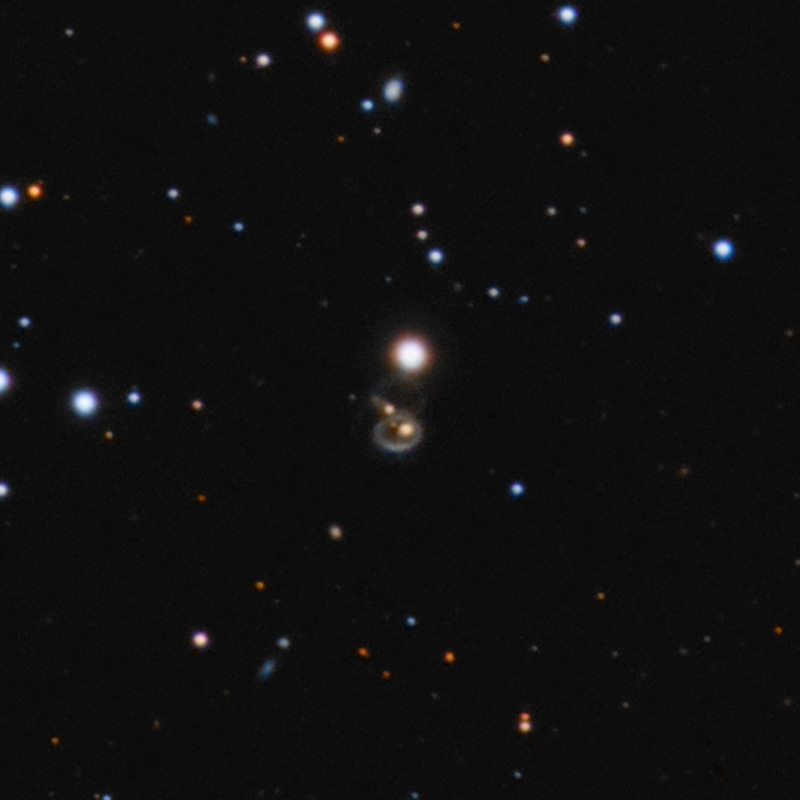