II Zw 073 is a very strange pair of galaxies in northeastern Bootes about a quarter billion light-years from us. Individually they are UGC 9796 and MCG +07-31-049. At that distance, you might not think there is much to see but the western galaxy UGC 9796 is a polar ring galaxy with a huge polar ring. While the galaxy itself is rather small with a diameter of its spiral disk being 28,000 light-years across the polar ring is about 115,000 light-years across. Its polar ring is 4 times the size of the galaxy. A very strange situation indeed. The UGC\'s original entry in 1973 reads: \"Diffuse \'spindle\' (dwarf?) with elongated \'core\', probably superimposed companion\". This was before polar ring galaxies were really known so the confusion isn\'t surprising. More surprising to me is that it is an entry in the Flat Galaxy Catalog! It is listed in the addenda catalog as FGC 224A (the \"A\" identifies it as an entry in the addenda catalog Apparently they are considering the polar ring the plane of the galaxy. Even then the length is only about 4 times the width, not 7 times needed to make the FGC.

Its eastern companion, MCG +07-31-049 is listed as a starburst galaxy by NED but lists no other classification for it. It too is a quarter billion light-years away. There are several other galaxies in the image at this distance. One is another flat galaxy, this one looks like it may deserve the designation. It is FGC 225A, also from the addenda catalog. CGCG 221-045 is a LINER galaxy. It has a companion, ASK 403585.0. This pair is again a quarter of a billion light-years distant. In the lower left corner is KISSR 1929. It appears to be a \"Sloshed\" galaxy\". These are galaxies with the core well off center. Usually, this is considered evidence of interaction with a much more massive galaxy. However, there isn\'t a nearby candidate that I found, even well out of my field. Starburst, polar ring and LINER galaxies can all be indications of prior interaction. With it being virtually certain in the case of a polar ring galaxy. This group may have been a much tighter group in the past allowing these interactions that we see today.

There are several quasars in the image, one closer than some of the distant galaxies which is rather surprising. Two are labeled as BAL quasars. This means they have broad absorption lines in their spectrum. If you are curious about what this means it is explained rather well in not too technical of terms at: http://arxiv.org/ftp/astro-ph/papers/0610/0610656.pdf in the introduction part of the paper. Those wanting more can read further. 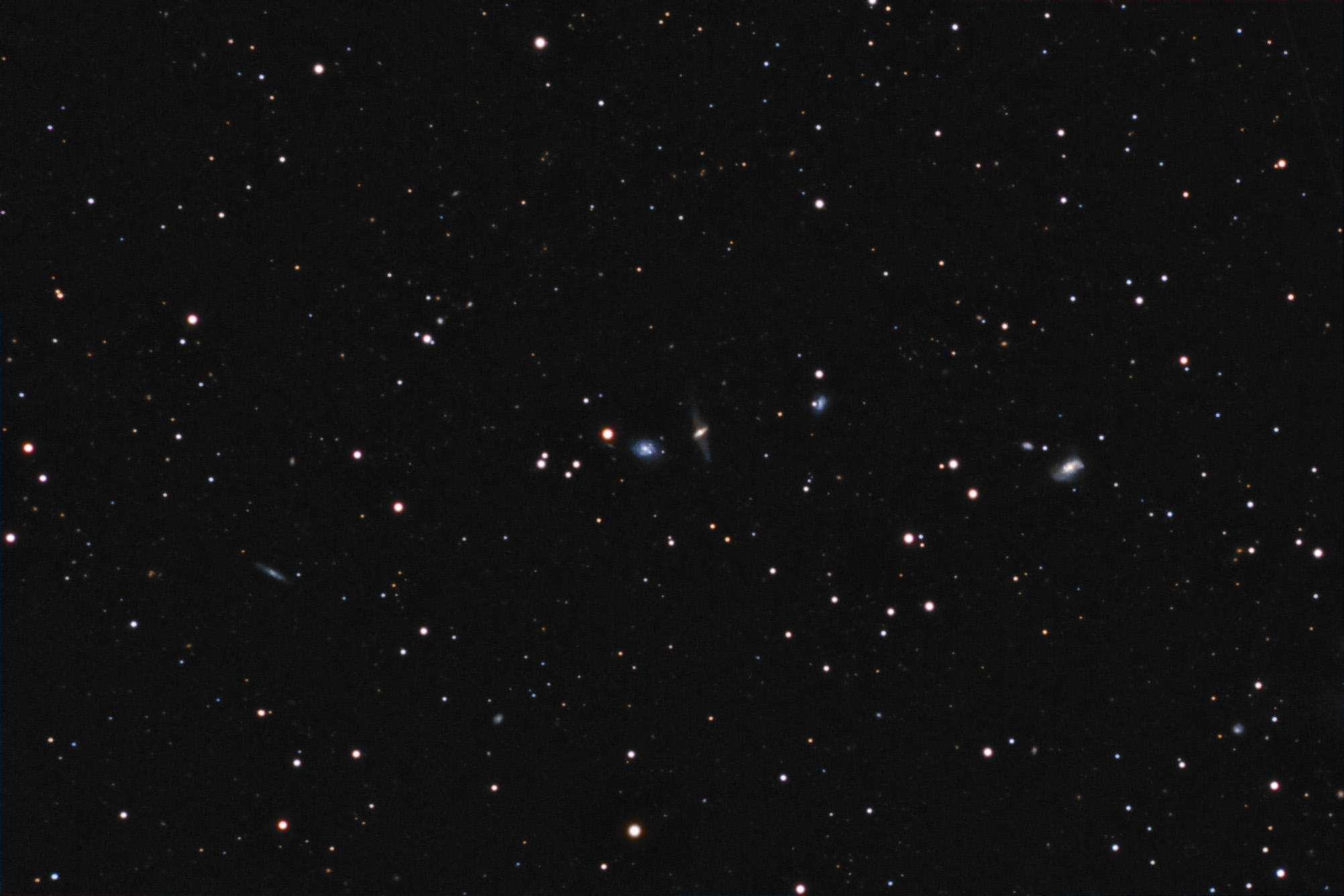 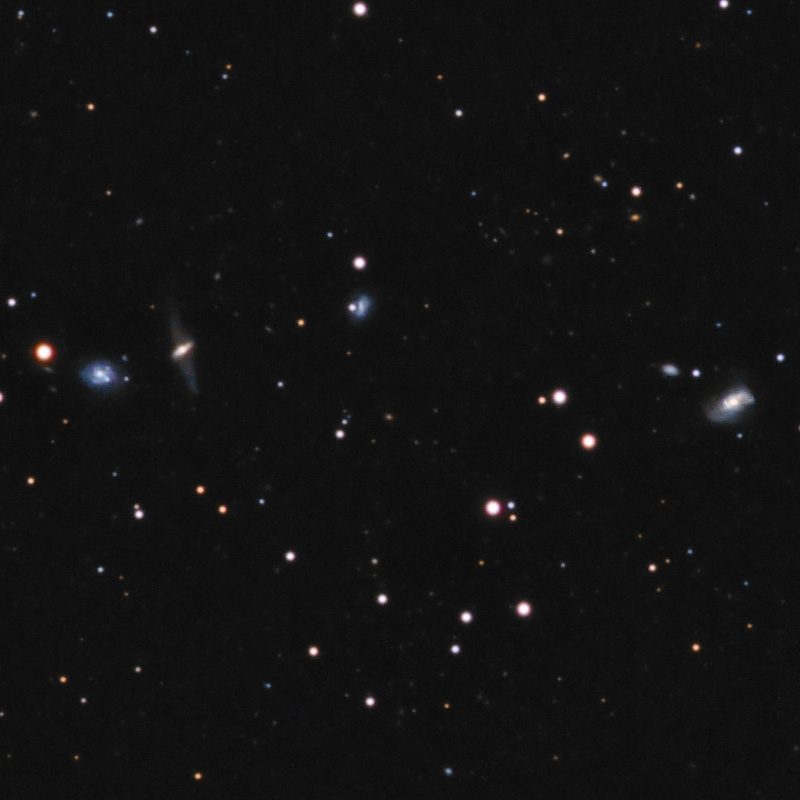 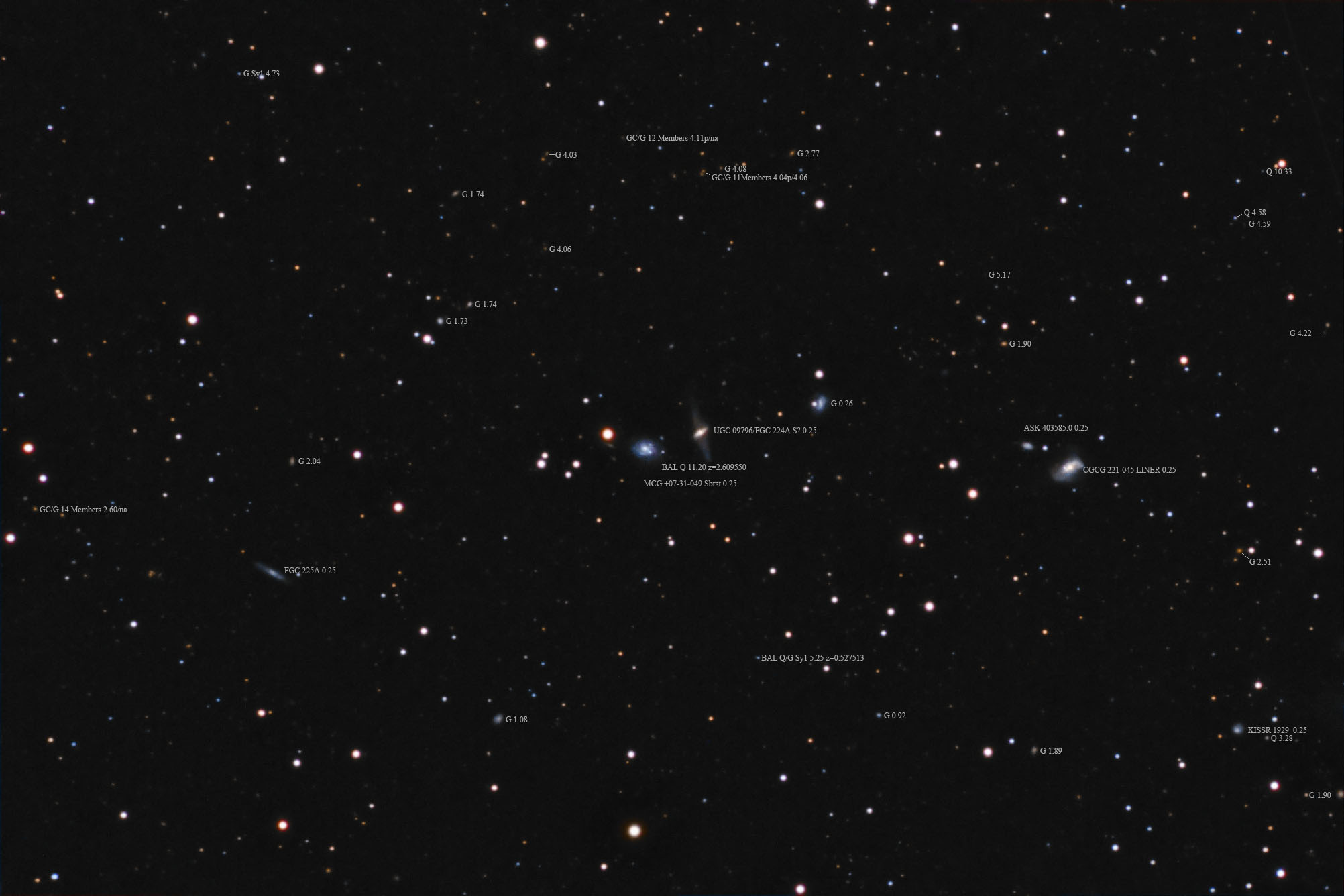