King 5 is an open cluster in Perseus. Being in the winter Milky Way it is in a rather rich star field. Not nearly as rich as the summer Milky Way however since we are no longer looking inward toward the core of our galaxy where most stars reside but more outward toward the suburbs so see fewer stars. Most stars in the Milky Way are small red dwarf stars. Most of the stars we see with the naked eye are giant stars and most of those are blue in color since those that are red are dying and won\'t be around very long. Though giant blue stars can be short-lived those that are only bluish last a few hundred million years so to make up the majority of the bright stars we see. This is seen in this image as well. The few bright stars are blue, most of the rest dim orange-red stars. Every red dwarf star ever created is still alive today unless it collided with another star -- extremely rare so its safe to say 99.9999% of all red dwarf stars are still around. Thus by sheer number, they dominate by number but not by light. Even their masses can\'t outshine the few massive blue giants that form the spiral arms of galaxies. Thus we see most spiral galaxy arms as somewhat blue in color even though that color is created by the smallest population of stars.

The King catalog of star clusters is small. There are only 26 members and #3 is missing or a duplicate of NGC 609, depending on who you wish to believe. Nearly all King clusters reside in a narrow band about 50 to 60 degrees North declination and are in the Milky way running from about 23 hours R.A. to 3 hours. So they are in a rather small area of the sky. It appears King made three searches for previously unknown clusters as the catalog runs from 0 through 24 hours, then does so again, then does so again. Each time picking up less obvious clusters. Some may not even be true clusters. One is actually well below the celestial equator. It must be the outcast member of the group. Anyway, I happened to need something in the only clear spot on the sky one night and this was the object. Not needing a lot of exposure time I started to image it. The sky clouded over then cleared then clouded then cleared. With the poor sky I just kept imaging and ended up with my normal exposure time but it was visible only about 20% of the time. The rest of the time I was seeing nothing but clouds. So this image doesn\'t go very deep compared to my normal images but is rather pretty. The cluster is estimated to be about 6000 light years from us. Distances to such clusters are not easily measured so this is only a rough estimate. Like all King clusters, it is made up of faint stars so not a cluster to see visually unless you are using a 20\" or larger telescope. Also, it is rather small in size compared to most M and NGC open clusters. Not surprising since they were missed by earlier visual surveys. It took the Palomar Observatory Sky Survey plates to let King even find these few overlooked clusters. 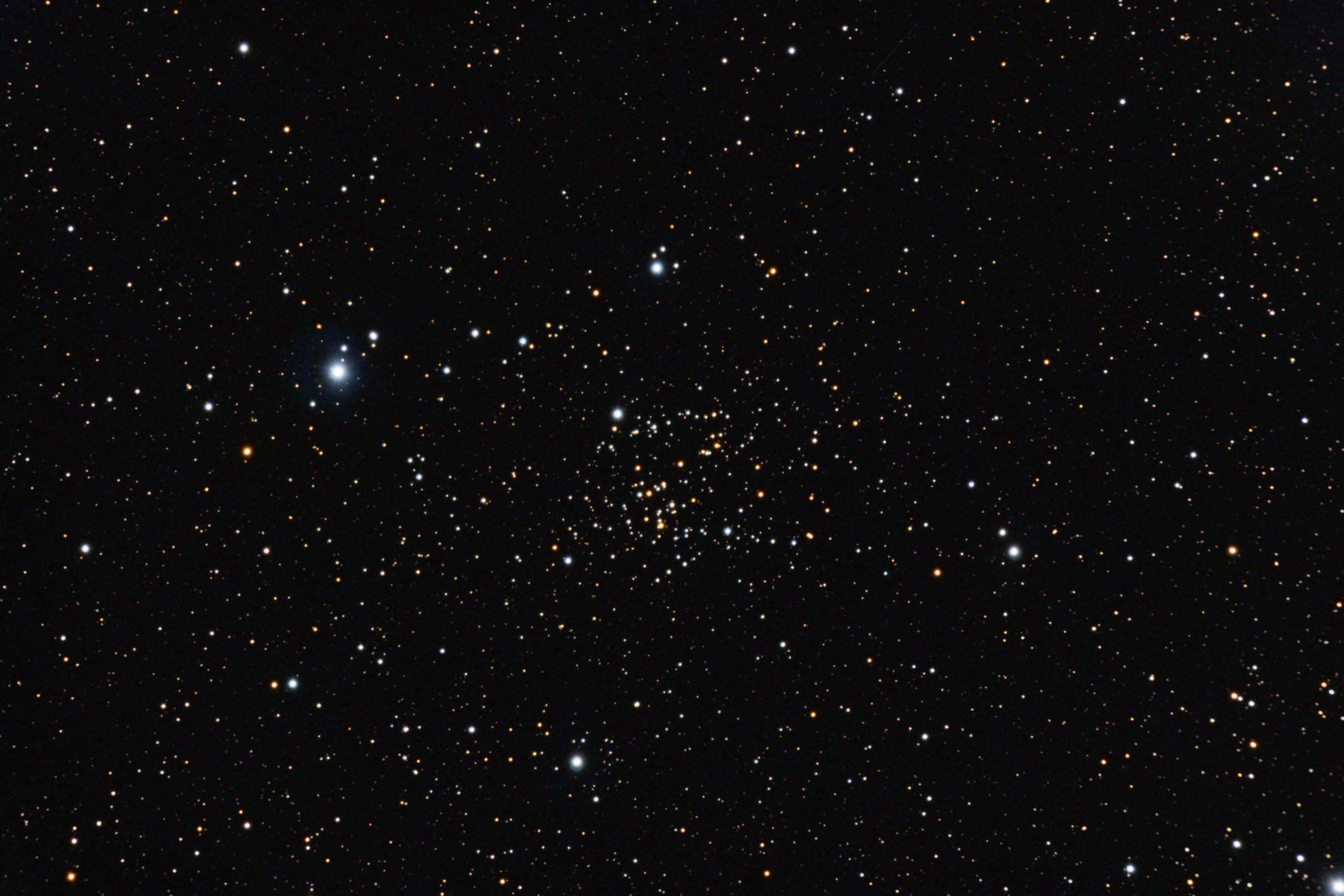