KKH 24 is a rather obscured galaxy in northern Cepheus only 4 degrees from the pole and 3.5 degrees from Polaris. It resides in a molecular cloud that looks somewhat like a comet. The \"head\" is GAL 126.6+24.5 AKA MCLD 126.6+24.5. The smaller and fainter comet-like feature to the upper left of kkh 24 marks the center of LBN 628.

NED says of kkh24 that it is an irregular galaxy about 76 million light-years distant. I found one Ph.D. thesis that covered this galaxy which states the stated redshift of 1706 km/s is very wrong and it really has a redshift of about 5000 kp/s. That puts it some 225 million light-years distant. The thesis says that rather than being an irregular galaxy it is a large spiral. If NED is right it is some 18,000 light-years across, if the thesis is right then it is 53,000 light-years across. I\'d not call that a large spiral, just a normal one. In the POSS red and blue plates it does look like an irregular galaxy but in the POSS II IR plate, it shows a classic spiral shape. In my image from the core west (right) it looks very much like a normal spiral at over 200 million light-years. The eastern half is odd looking, likely because it is being hidden by the dust of the molecular cloud we have to look through to see it. The galaxy is quite red in my image. The thesis says its B-V is 0.91 and thus it is very reddened by the molecular cloud. But then it goes on to say: \"Attempts to remove the emission of the nebula by fitting the background were unsuccessful, as the nebular emission varies too drastically across the region of the galaxy to interpolate what emission would be superimposed on the galaxy. Therefore, the galaxy colors are contaminated by the presence of the nebula\'s light.\" So I\'m not sure how that B-V was determined.

The only other galaxy in the image with redshift data at NED is 2MASX J04081574+8540400 in the lower right corner. NED has it at 350 million light-years from us. That\'s about all it has to say about it. With a field this far north it isn\'t surprising data is so lacking. Galaxies this far north just aren\'t common so surveys avoid this area to concentrate on where the pickings are better.

The thesis I\'m referring to is \"The Stellar Content and Star Formation Rates of Dwarf Irregular Galaxies\" by Jacqueline Michelle Dunn who got her Ph.D. from TCU in 2007. https://books.google.com/books?id=J9Dimgwwa-UC&pg=PA8&lpg=PA8&dq=The+Stellar+Content+and+Star+Formation+Rates+of+Dwarf+Irregular+Galaxies&source=bl&ots=aMbSiAk27R&sig=xPZkdgpiPcBDp0K2LW5xFRToatI&hl=en&sa=X&ei=SWMrVffTBc_9gwS0nYPoCQ&ved=0CCkQ6AEwAg#v=onepage&q=The%20Stellar%20Content%20and%20Star%20Formation%20Rates%20of%20Dwarf%20Irregular%20Galaxies&f=false 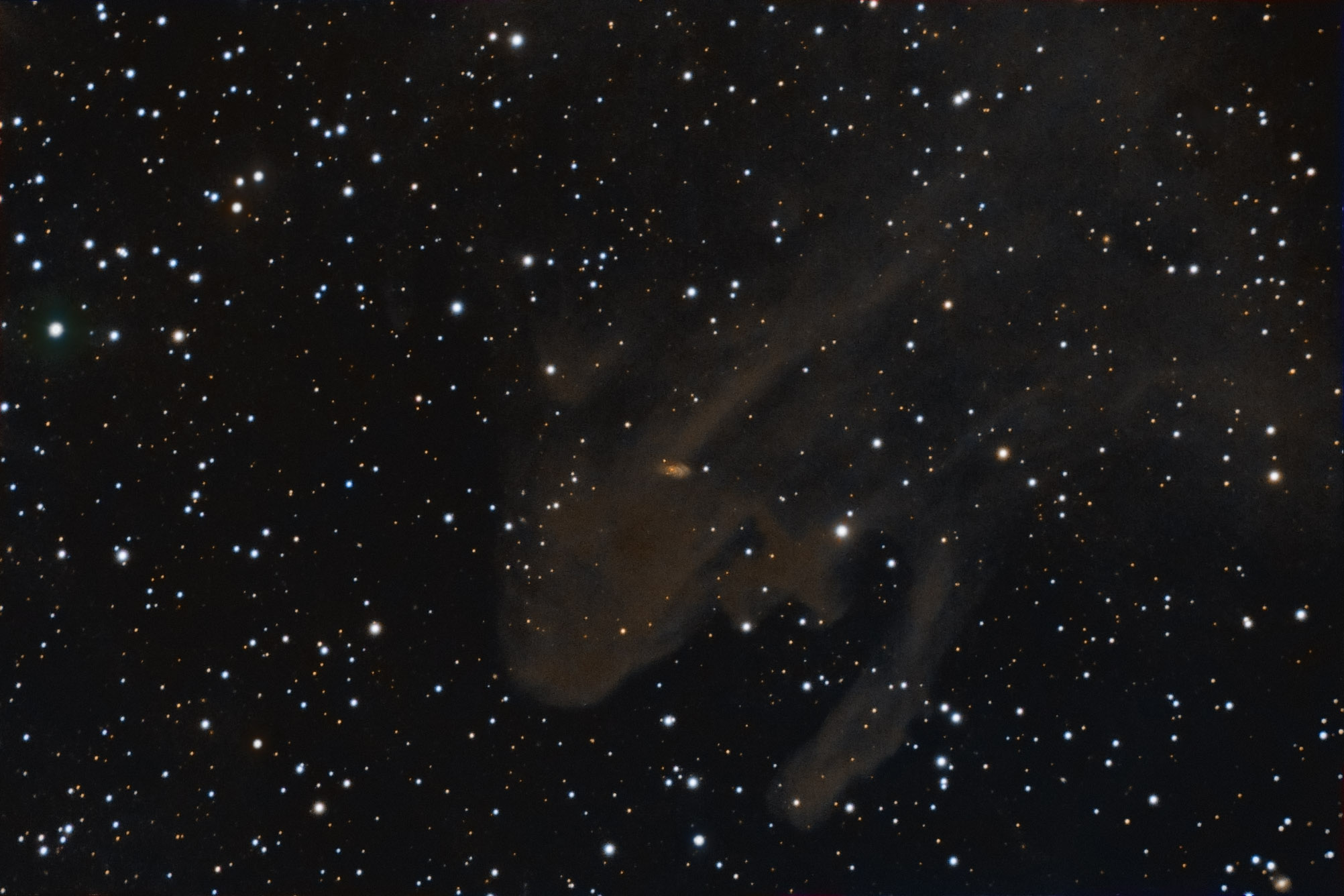