The nearby irregular galaxy kkh 58 is located in north central Leo Minor. Its redshift puts it 39 million light-years distant but a paper listing LVGs (Local Volume Galaxies) gives a Tully Fisher measurement of 48 million light-years while NED cites a single Tully Fisher measurement of 60 million light-years. Agreement seems hard to come by here. The kkh galaxy catalog stands for Karachentseva+Karachentsev+Huchtmeier. Since those are names I\'d expect it to be KKH, not kkh. But NED always uses lower case for this particular catalog though I find papers on galaxies from this catalog are divided about half and half whether to capitalize the kkh or not. Again agreement seems hard to come by.

The galaxy has several faint star clouds and one very bright one. At first, it might appear to be an off-center galaxy core but that\'s not the case. It is just a huge star cloud in an otherwise common irregular galaxy. Its size based on its redshift would be about 16,000 light-years. The two Tully Fisher measurements give 20 and 25 thousand light-years for its major axis as seen from our perspective.

I found no images of it but for Sloan and POSS survey images. I left no note as to what drew my attention to it. After searching I still can\'t find what it was that drew my interest to it. I usually note that in my to-do listing but failed to do so for this one.

The annotated image is rather sparse as few galaxies had redshift data at NED. Many weren\'t listed there at all. I was especially interested in a pair of possible interacting galaxies to the northwest of kkh 58. Only the eastern galaxy was listed at NED and that without any redshift data. I did annotate it with its Sloan Survey designation (only coordinates) and a question mark for its possible companion. Many of the galaxies and all quasars with redshift data were listed only by their coordinates so I used just a G, Q or UvES for a label for those as the coordinate designations are quite long and tell little. UvES stands for Ultraviolet Excess Source and in this case designates a quasar candidate. Since a star can sometimes fool a photographic redshift determination these remain, candidates, until better data is available including a spectroscopic redshift.

For an object I can\'t recall why I imaged it in the first place, I spent an inordinate amount of time trying to capture it. Clouds kept ruining the attempts. I wasted many hours over a 4 month period trying to get usable data. Nearly all of it was thrown out as of very low signal to noise ratio and often of extremely poor seeing as well. I finally used 6 luminance frames taken over 3 of the nights but the color frames all came from my final attempt on March 24, a night of poor seeing so no luminance frames came from that night. Oddly, not one of the many frames picked up an asteroid though with so little data from any one night the trail would be hard to see if there had been one. 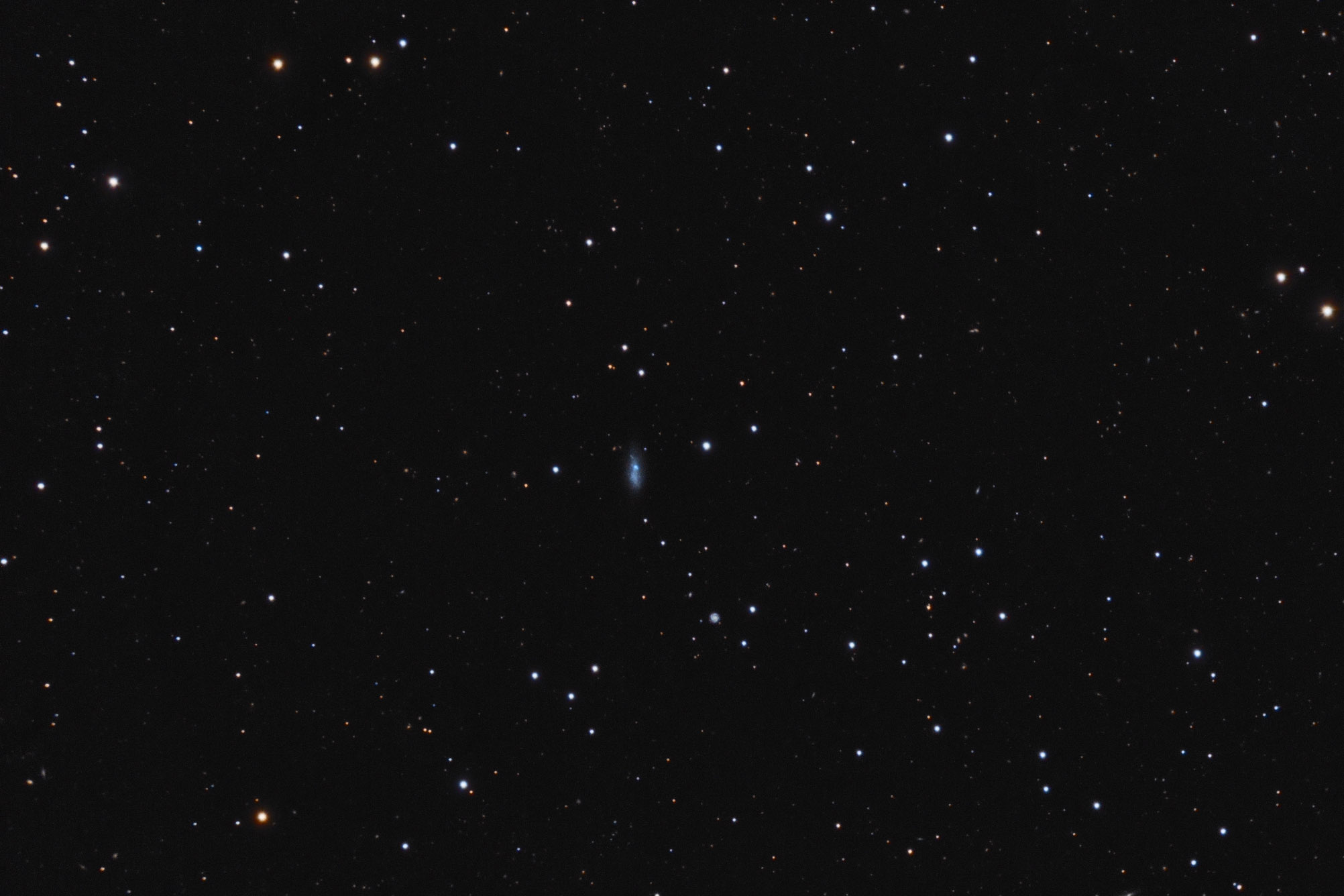 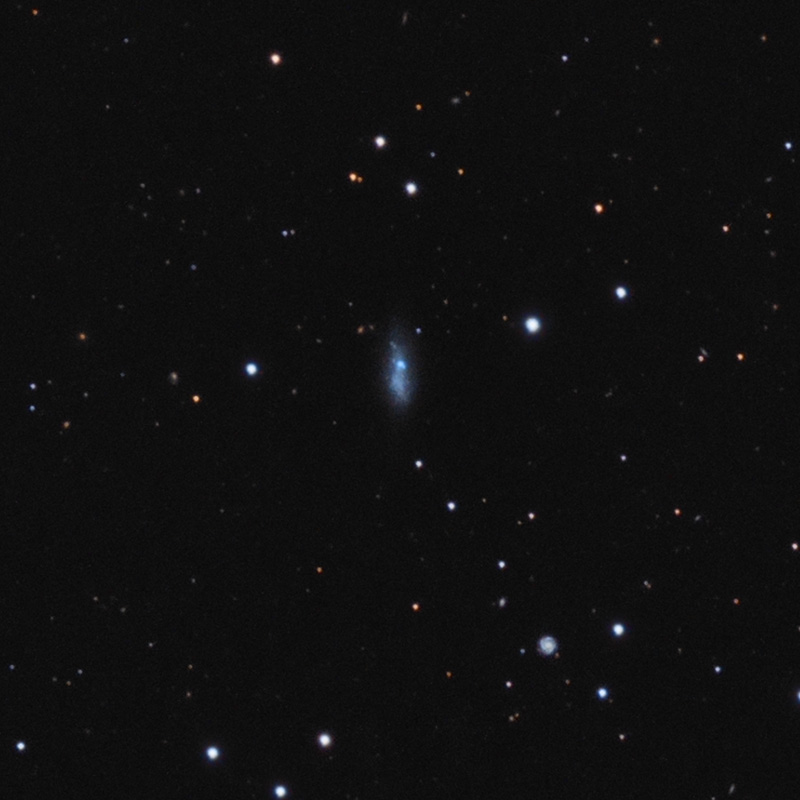 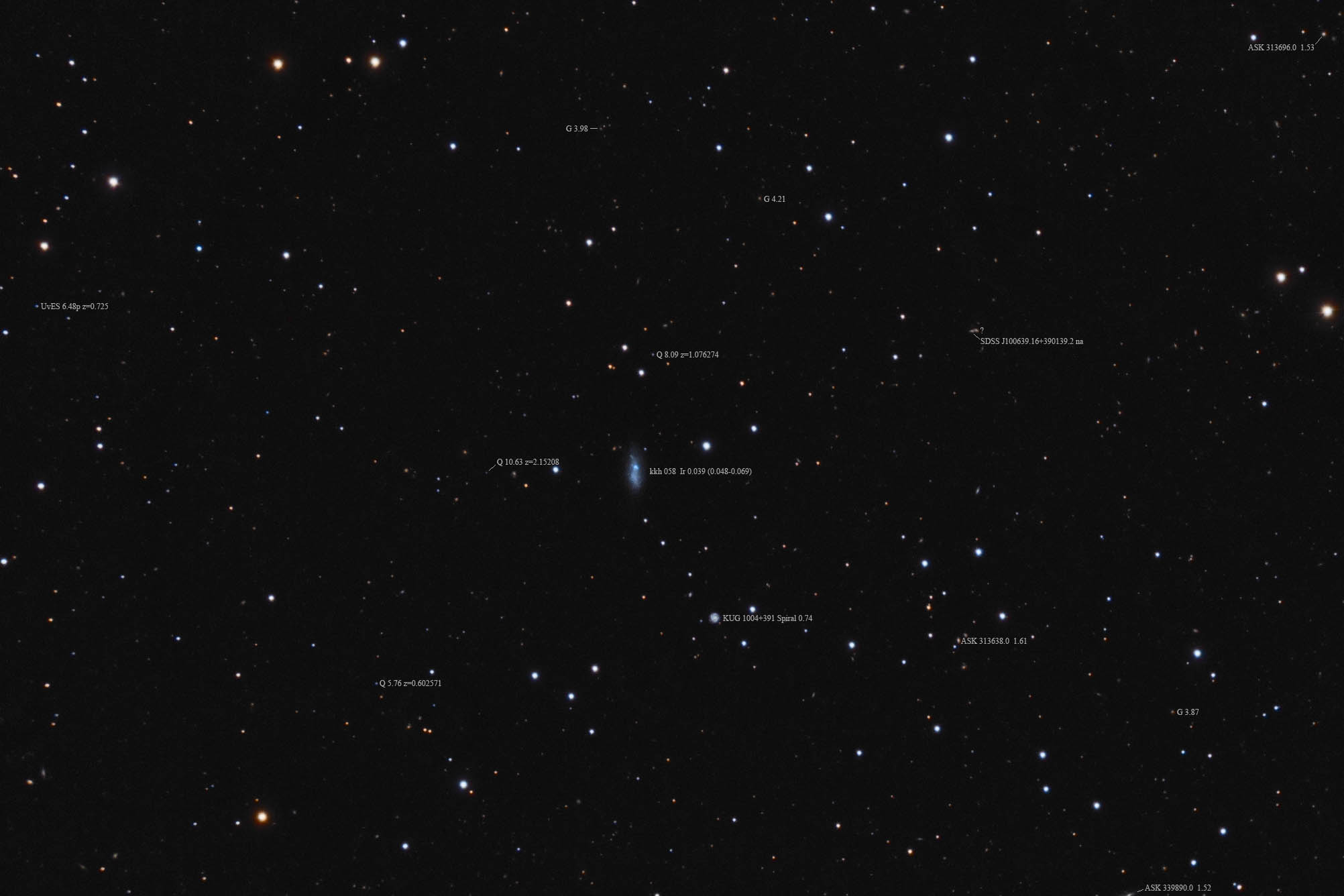