This new nebula, first recognized by amateur astronomer Jay McNeil when trying out a new 3\" telescope in 2004 has interested me. It\'s appearance was short lived as by 2005 it was gone. An amateur photo by Evered Kreimer in 1966 shows it but images taken before and after this date don\'t. When I finally got the observatory up and running in 2005 it was gone as mentioned. Figuring I likely had 40 years before it would reappear I crossed it off my list but kept hoping it would return. When it came out of the sun\'s glare in August of 2008 it was back! Since then I\'ve kept watch on it though it seems not to be well followed by the amateur community for some reason.

Images I took in September then again in late October of 2008 showed it had changed somewhat from its previous appearance. This image is taken in February 2010 then lost on my hard drive until recently. Unfortunately my color data was hampered by severe clouds. They dimmed the overall image somewhat but seeing was far better than 2008. This makes comparing the two difficult but it appears there\'s little change over this period. There appears to be a faint spur coming out of the bottom right of the nebula that is lost in the bright region to its left in the 2008 image but is barely seen. This may be a seeing effect. See the cropped image for the comparison.

McNeil\'s Nebula is thought to be a brand new star, V1647 Ori, shedding the dust cloud that surrounded it\'s formation. As the cloud is blown away it allows the light to hit and reflect dust to its north. In this case both the star and nebula become visible at the same time.

Below the nebula are some other very new stars. The group of four red objects below McNeil\'s nebula are Herbig Haro objects HH24a-d. These are also new stars. In this case they are creating high speed jets out their rotational axes that hit nearby gas and dust. The red comes from hydrogen alpha emissions created by hydrogen gas hit by the jet. Such objects are thought to last only a very few thousand of years being a short phase in the birth of a star.

Further south is another cloud, mostly seen by reflection. It is lit by the light of the T Tauri star HGC 502. These likely are somewhat \"older\" new stars, being a million years old or so. They are still not on the main sequence and vary in intensity. They often are lighting up the dust and gas that surrounds their birth site. Since they vary in intensity as they get their fusion cores under control as they move onto the main sequence where they will spend most of their lives, the nebula also varies in intensity. Since light travels at a finite speed the star and nebula appear to vary independently of each other. This is due to the light travel times involved due to the geometry of their location and ours.

So where does McNeil\'s nebula fit in? It is likely lit by an FU Orionis Star. These too are stars still in their infancy that haven\'t reached the main sequence as yet. They are known for \"rapid\" brightening of several magnitudes, often staying very bright for years at a time. But \"rapid\" only in the astronomical sense. They can take only months or decades to brighten. The range is quite great. Since the brightening has always happened when no one is looking both the nebula and star are at full brightness. It should be that they brighten somewhat differently as the light from the star has to travel the length of the nebula and has to then come to us. Thus it should brighten with the parts with the shortest light travel path (star to nebula to earth) being seen lit first. Yet this isn\'t seen. It could be that the star is hidden behind a curtain of dust so little visible light escapes (its been known for some time in IR light -- the star not the nebula). Then a cloud on our side of the star opens up so we see the star. Its light then illuminates a small part of the dust cloud further out but only that small part that\'s between us and the star, the rest is still shadowed. If the star really brightened suddenly and the dust was all around it we\'d see different parts of it illuminated at different times unless the only dust is nearly on a line between us and the star. Possible but given this whole area is in deep dust I think unlikely. That\'s about all I can think of. Any other ideas?

Good seeing -- lousy transparency: Lousy seeing -- good transparency. Why do these follow a \"corollary\" of the Heisenberg Principle? 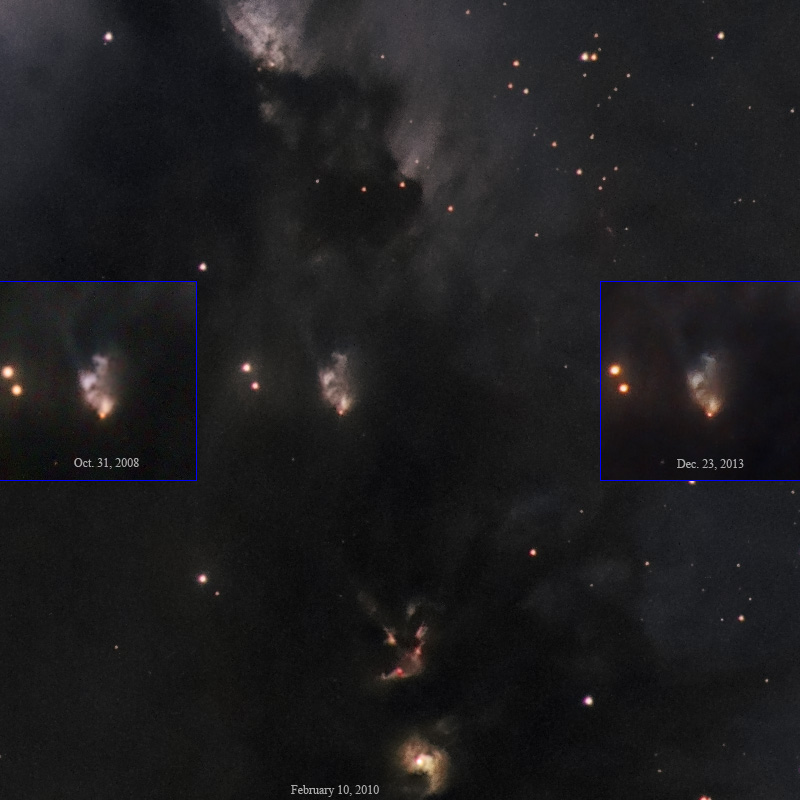 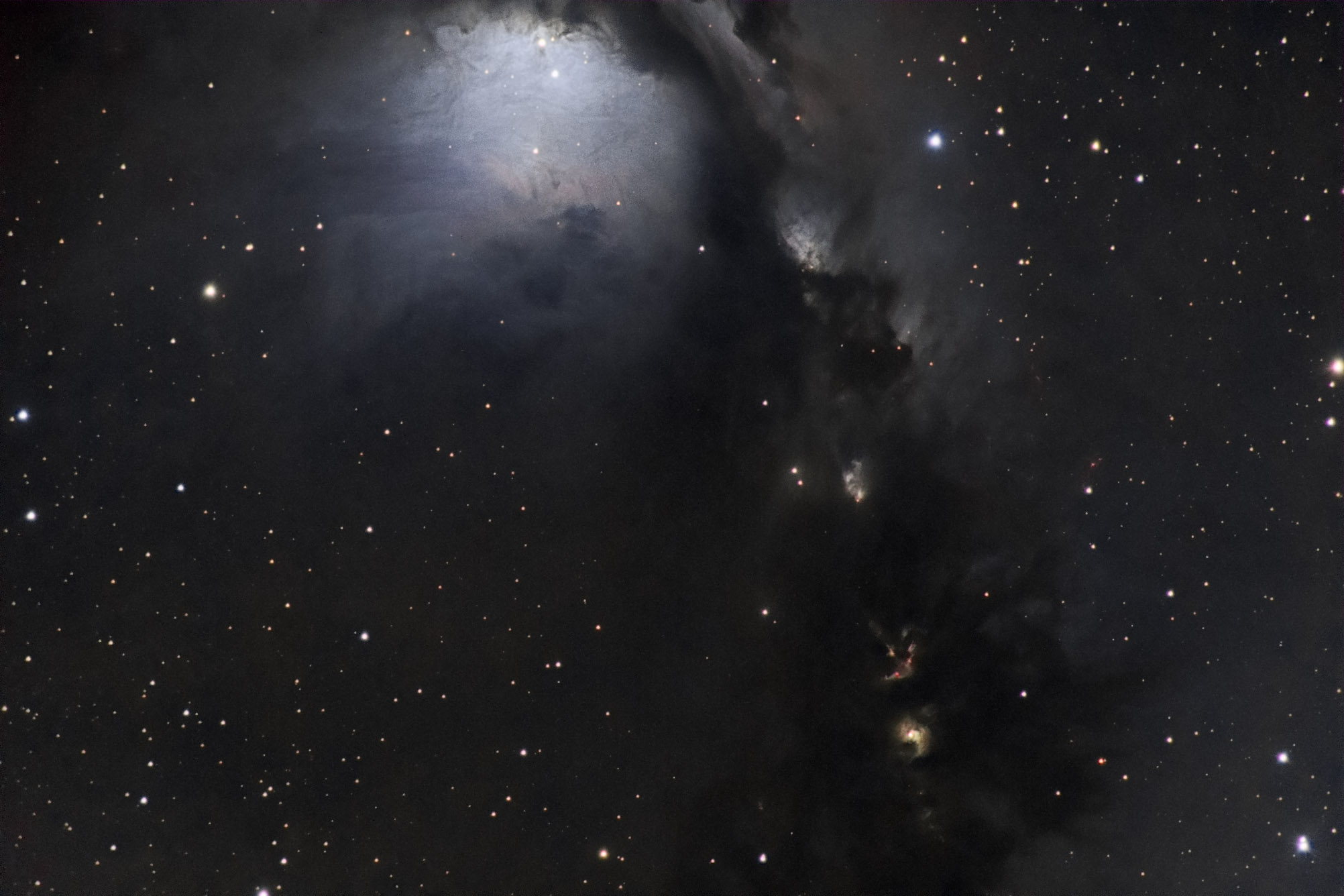 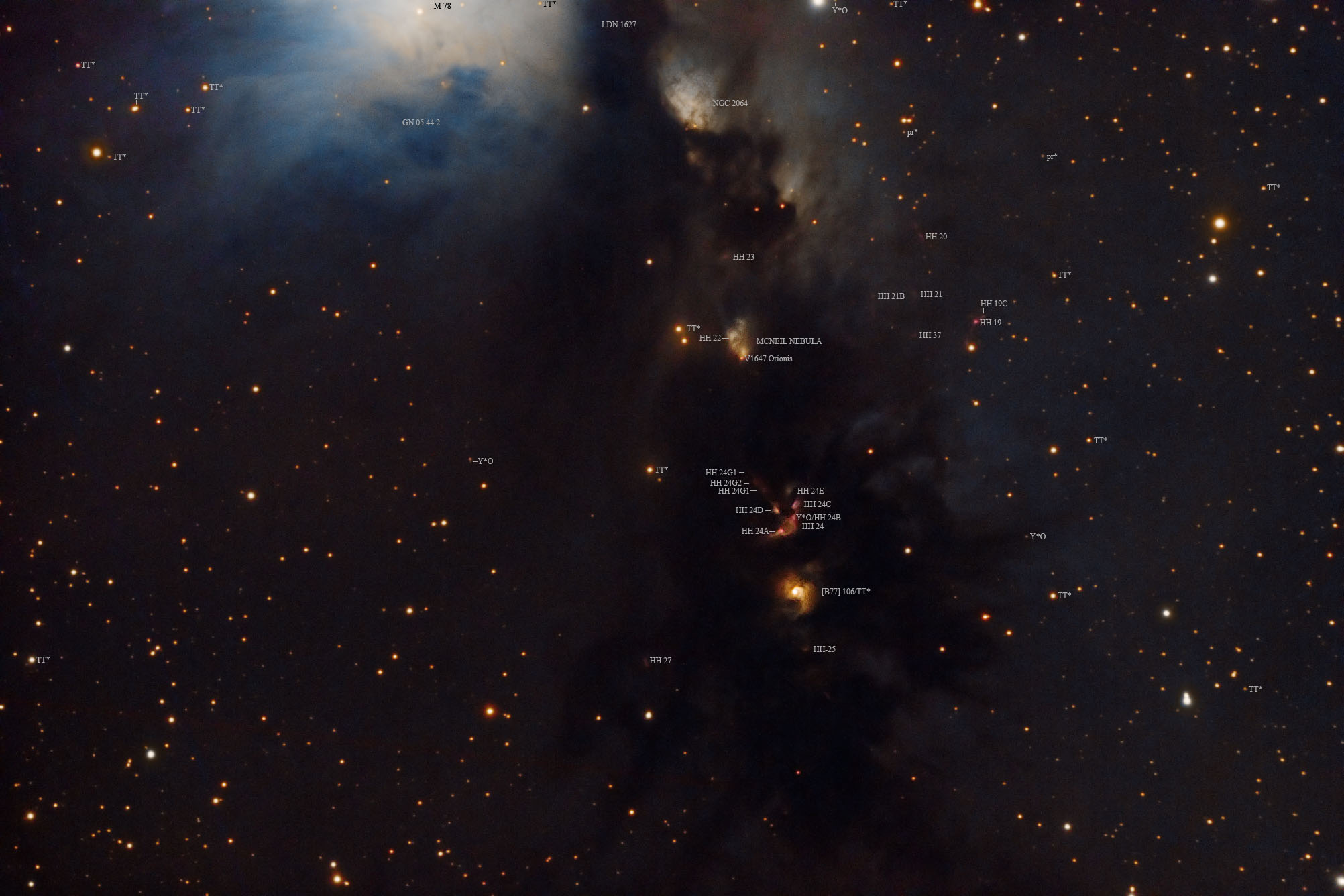