It was murky here the night of the 15th UT but I managed 3 color frames before the murk got too bad. The following night it was near maximum brightness but before I could get anything the murk did me in. It was easy naked eye before the gunk got to me. I should have been getting data rather than looking naked eye but it seems I never look at the sky any more, just the monitor. It was easy to see with the arrow of Sagitta pointing right at it. High clouds are a problem again tonight and with the bright moon nearby conditions will be poor so I decided to process the three color frames I got on the 15th at about 4:30 UT. What little I got through the murk the following night showed it to be at least a magnitude brighter and much bluer.

The last nova in Delphinus was in 1967. That one hung around at near maximum brightness for many weeks. As my log from August through October shows it actually was brighter at about 4.5 at the end of October than it was in August when I first learned of it. It was about one magnitude fainter then. Weather and it being low at sunset blocked any view after that. I don\'t find it in notes from 1968. It still shines about magnitude 13 after taking several years to fade to that level. Are we seeing the companion it is stealing matter from rather than the white dwarf that blew? I haven\'t researched it.

I\'ve included my image from August of 1967 taken from my drive in the Lincoln, Nebraska. I used a Polaroid camera on the dec axis of my 10\" f/5. That was about as close to digital imaging as you had back in 1967. At least you saw your result nearly immediately. Film was very slow. The exposure was 10 minutes just to get what I did. The blue layer seems to have had less reciprocity failure than the other layers as any faint star came out blue as did the sky background. The lens, while \"slow\" still had lots of off axis distortion. This image is a heavy crop of the full frame and is near the top of the frame where this distortion is obvious with this much enlargement. Much of my house was in the full frame. Still it worked well to monitor the nova. I\'ve marked on that image the location of Nova Delphini 2013 46 years later.

I then managed to take another image when clouds cleared nearly a month later on Septemver 23, 2013. By then the hydrogen shell it emitted was coloring the star with the red light of ionized hydrogen.

September image also used 1 10\' frame for each color to keep it similar to the August 29 image except for what was lost to clouds in the August image. I tried to match the field stars but it appears they are still a bit brighter in the September image which had no cloud issues. 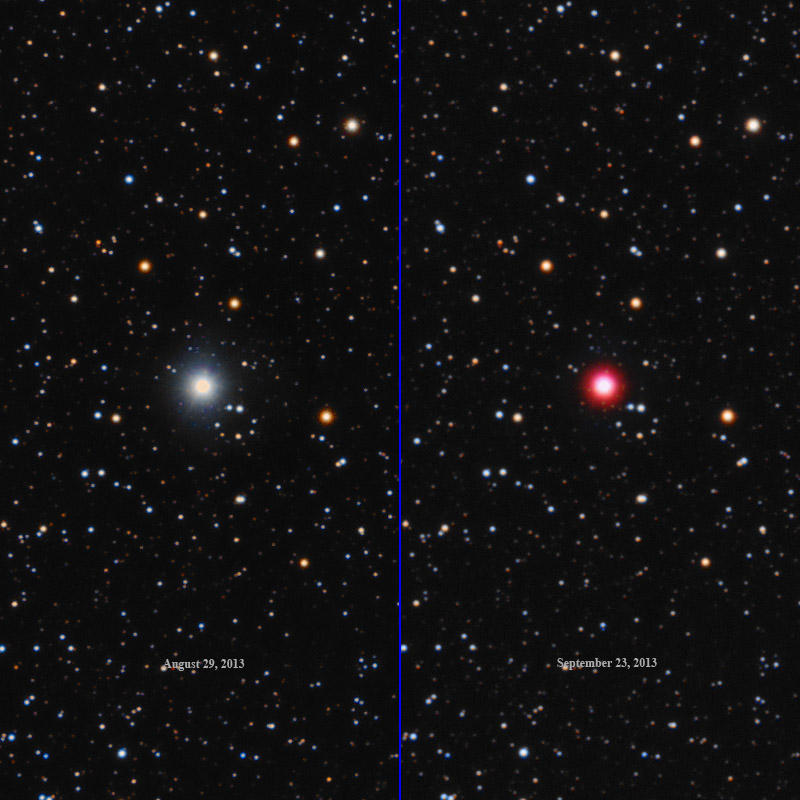 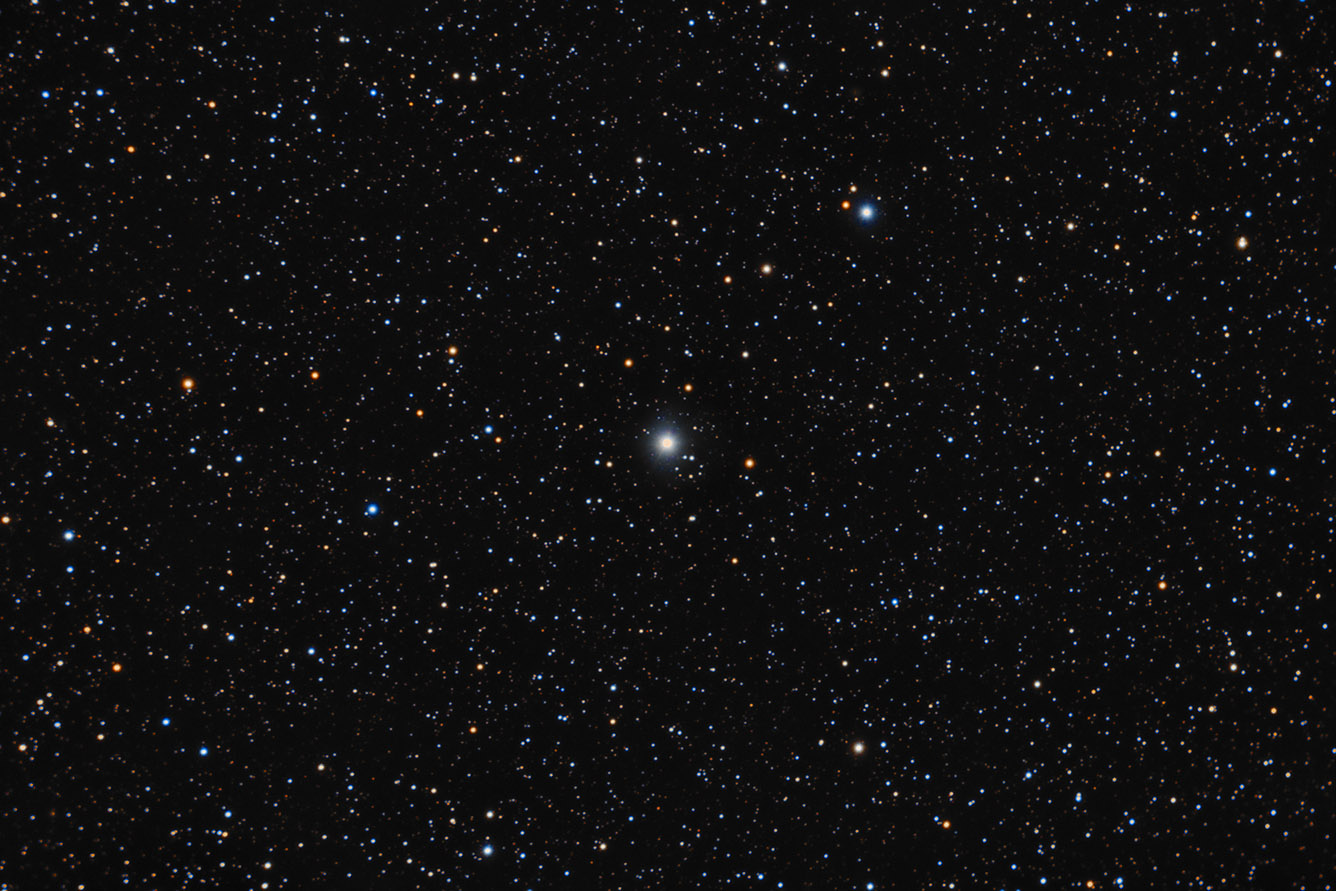 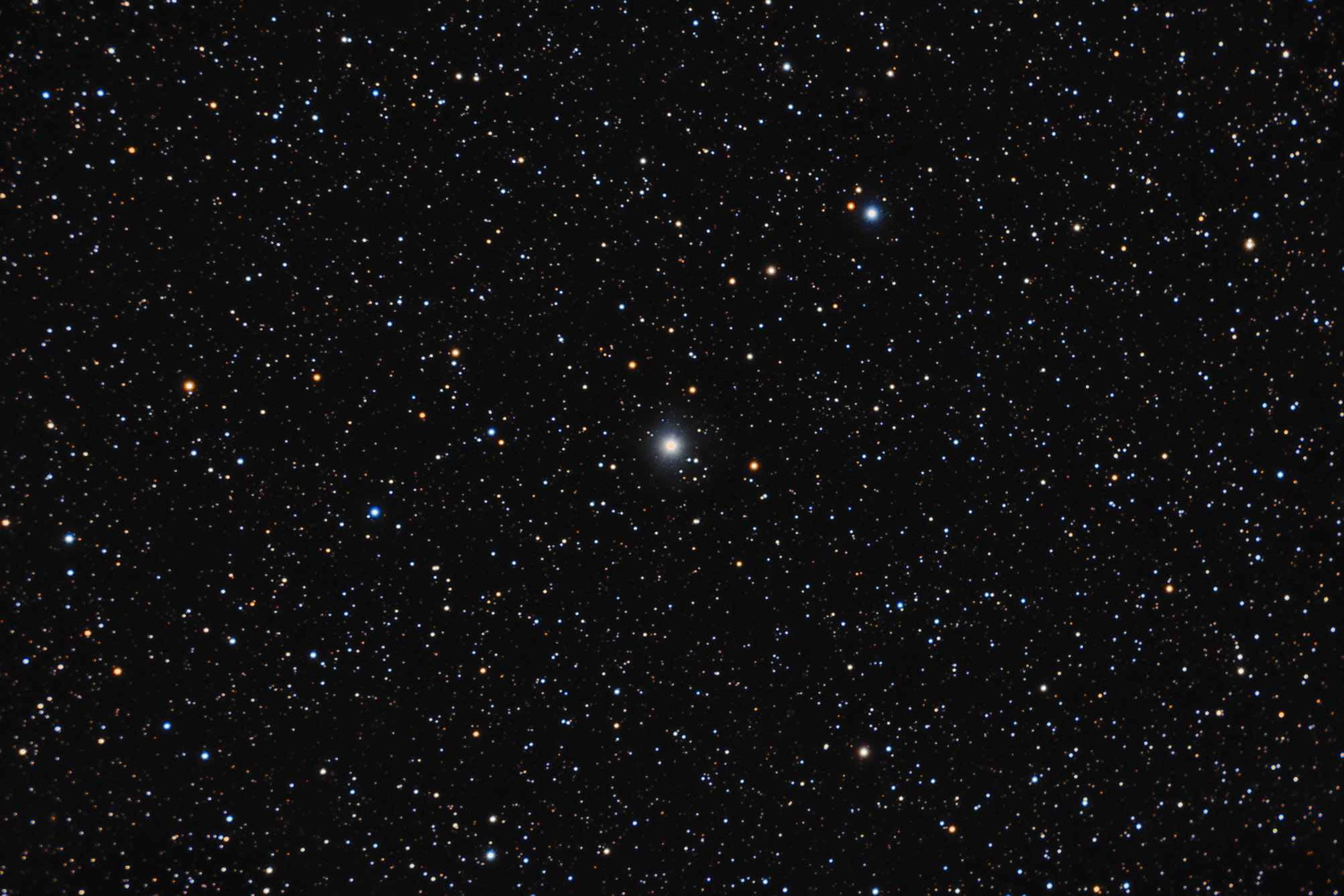 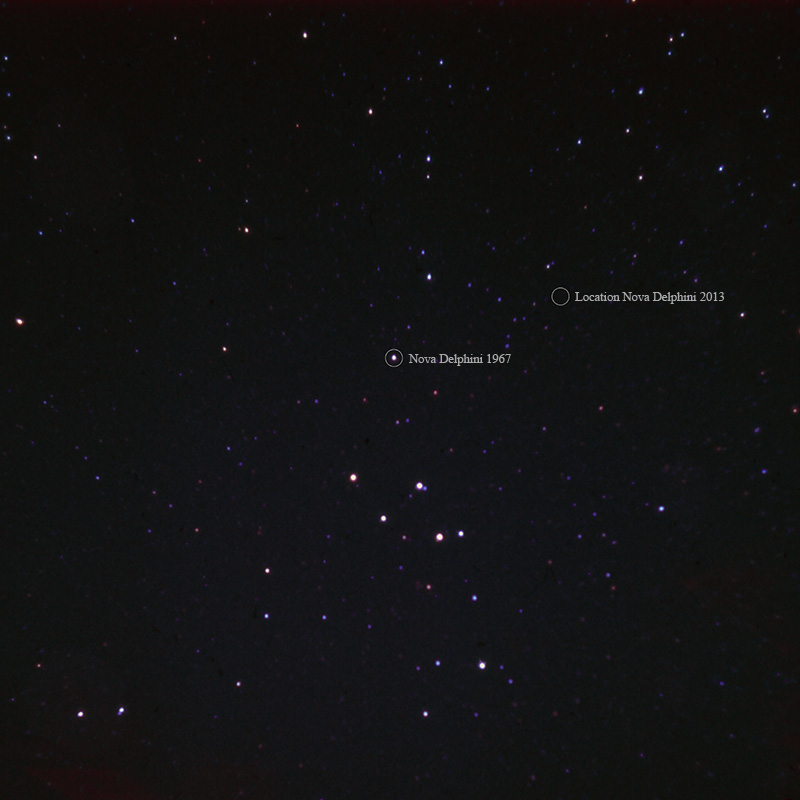