While it was cloudy the night 8P/Tuttle passed near M33 it was clear a couple nights later so I was in hog heaven. A clear night after weeks of clouds and no moon. Mr. Murphy though had other ideas. The first target of the night was to be P8/Tuttle. It had been up by the pole for months where a tree hid it from me. Just as it was beginning to move south the clouds rolled in. Now it is moving rapidly south at high speed -- for a comet in the sky. Contrary to TV, comets don\'t zoom across the sky, Their motion is too small to see without a telescope unless they happen to be passing very very close to us. We had one in 1983 that did move completely across the sky in three nights but still you needed a scope to see this motion as it was much like watching a minute hand on a clock. Come back 10 minutes later and you could see it moved. That was comet Iras-Araki-Alcock, C/1983 H1. While Tuttle is moving \"fast\" it isn\'t moving that fast. Still, it was a challenge to image. If I tracked on the comet then the stars showed motion in only 4 seconds looking like short streaks. I needed at least 30 second frames for a low noise shot. Tracking the stars for 30 seconds resulted in a very blurry comet. Yet I needed about 10 minutes of both light and color data and in that time the comet had moved several fields of view of my scope. You can see the result of this in a photo posted to NASA\'s Astro Image of the Day page of the comet going by M33.
https://apod.nasa.gov/apod/ap080102.html
That funny greenish streak is the comet and shows how far it moved in one hour. It was moving even faster the night I took it.

So why isn\'t it a green streak in my shot taken at far higher magnification than the APOD image? I put a heck of a lot of work into the processing! I took two sets of images, one tracking the comet and another tracking the stars as they were at the very end of the comet tracked images. I then subtracted the stars out of the one that tracked the comet (easy to do with a routine called sigma reject that ignores an object seen in only one frame as the stars didn\'t overlap from one frame to the next due to the comet\'s high speed). Then I subtracted out the comet from the image that tracked the stars. That was hard since the comet is big and thus overlaps itself from frame to frame. Sigma reject only dimmed it and got rid of the nucleus to a great extent. I won\'t bore you how that was done and still leave stars hiding behind the coma. A Photoshop expert would likely find it easy. I was no expert back in 2008 so it took me many tries but I think I finally mastered it.

Now for Mr. Murphy. For some reason, the power kept going out and short random intervals. The outages lasted only 3 to 5 seconds but that turned off the scope and camera. I had to reboot the computer to regain control of the system. Then turn on the camera and mount. Since this takes a couple minutes the camera\'s CCD had warmed from its running temperature of -30C. Cooling back took a good 5 minutes. While this was happening I had to turn on the scope and home it so it knew where it was in the sky then slew back to the comet which had moved. If it was a star field shot the motion could be ignored speeding things up a bit but if it had then I had to recenter on the comet, turn on auto-tracking of the comet using its orbital elements and hoping to get another image before the power went out again, often I lost this race. Oddly the problem stopped at 6 a.m. when it got light. This happened for many nights. Calls to the power company got no sympathy saying there was nothing they could do unless it stayed off long enough for me to call it in and they to check their records. Since the outages started when it got dark and quit when light I assume it is something controlled by a light sensor and is off by day. Until it fails completely it will continue to be a problem. Fighting the constant outages I was able to get only minimum data that is somewhat noisy. Since the problem continued until the comet was too far south I never got any more data. We then had a long outage one night. After that, the problem never happened again. I assume the shorting equipment wherever it was finally failed totally.

I now have the entire system on an uninterruptible power supply which carries it through such outages. Since the power company buried the lines in this area such outages are rare but the UPS is still there just in case. 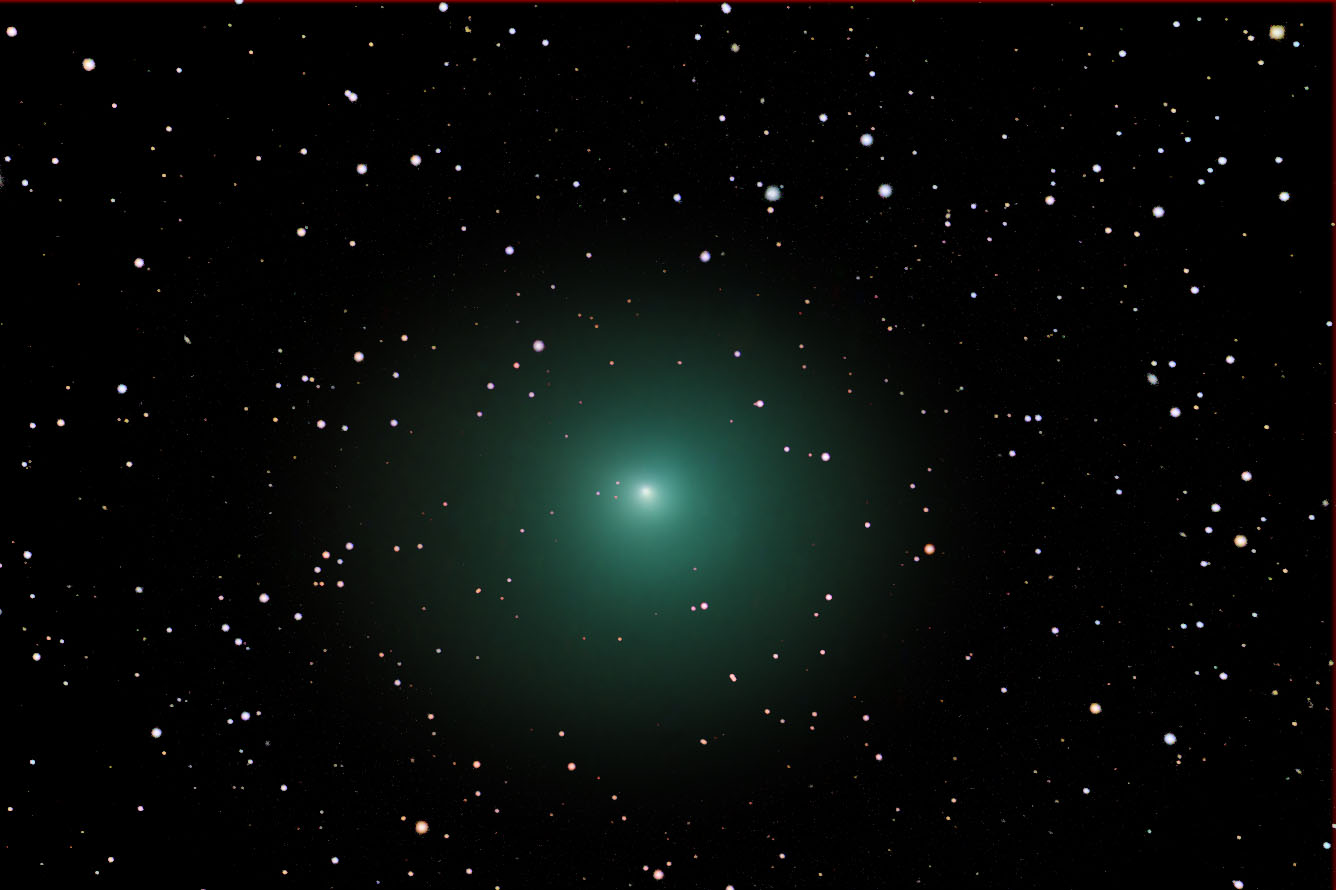