Palomar 4 is the most distant of the Palomar globulars. It is located in Ursa Major some 356,000 light-years from earth. It was originally discovered by Edwin Hubble in 1949 but before that was published A.G. Wilson also found it in 1950. Wilson named it the Ursa Major Globular Cluster and published it along with Palomar 3, 5 and 13 as well as two galaxies. Wilson\'s classification as a globular was considered unsure and it was cataloged in the UGCA Catalog as a dwarf galaxy in our local group. The UGCA is an appendix of 400 galaxies added to the UGC catalog limited to late-type spirals, irregulars and dwarf systems -- and an occasional globular cluster it would seem. It was even given the common name \"The Ursa Major Dwarf.\"

I could find only one globular that is more distant than Palomar 4. That is AM 1 but at declination -49.6 degrees it is always below my horizon. Its distance is listed as just under 400 thousand light-years. It is also the most distant from the core of our galaxy at just over 400 thousand light-years. Palomar 4 is the second most distant both from the sun (354,400 light-years) and from the galaxy\'s center (362,500 light-years). I\'m a bit confused about the orange stars seen against the cluster. Most sources say the brightest star in the cluster is 18th magnitude but 7 brightest orange stars are 16th to 17th magnitude by my measurement. Some or all may not be cluster members. I just don\'t know.

While I was able to resolve quite a few stars in the globular seeing was quite poor running about 3.7\" FWHM. Under better seeing, I\'d likely pull in a lot more stars in the cluster. It\'s on the reshoot list but it is in a part of the sky with several hundred objects I\'ve never imaged. I might get to it if I live to be 100 so don\'t hold your breath.

Normally globulars are seen looking toward the core of our galaxy but this one is almost opposite the galaxy\'s core which means it is in a very unobscured part of the sky. For a change, there are a lot of galaxies in this globular image. They seem more common than foreground stars. While NED lists a couple thousand galaxies in the field only a few have redshift data. I annotated all of those. Nearly all have catalog names that are just their position in the sky. I list those only by type of object all of which are galaxies in this image. There was one galaxy, a flat galaxy from the 2MASS survey, that is listed by name and one galaxy group. It consists of 4 members, all of which are easily seen in my image A line points to the center of the group as defined by NED. Distances are noted in billions of light-years which makes for a lot of leading zeros in the case of Palomar 4! 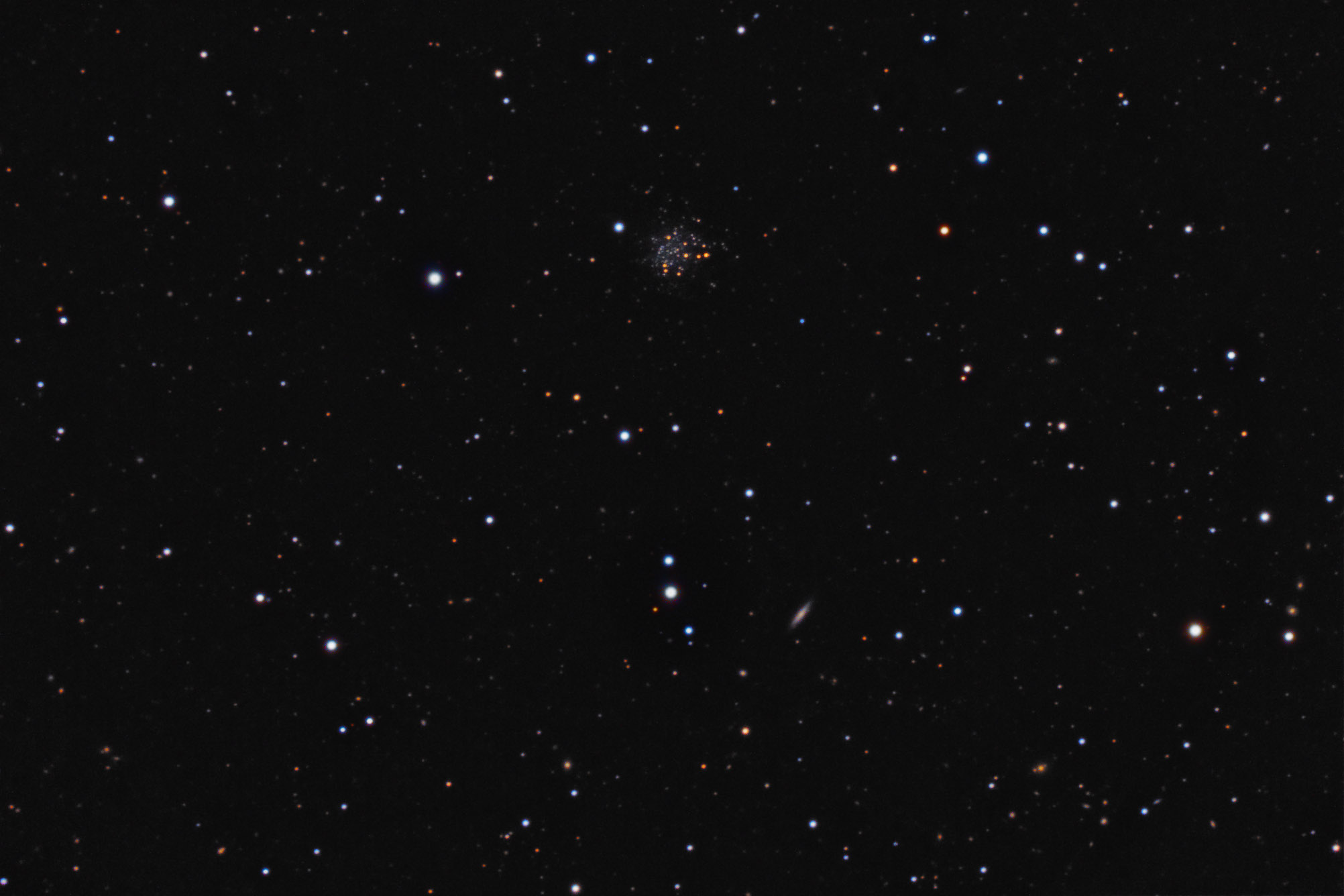 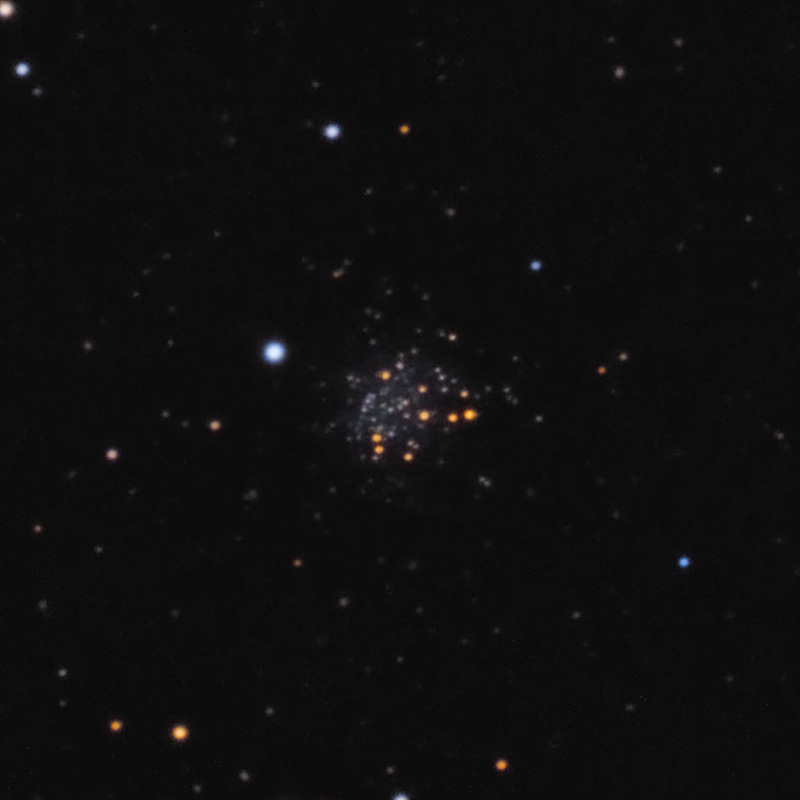 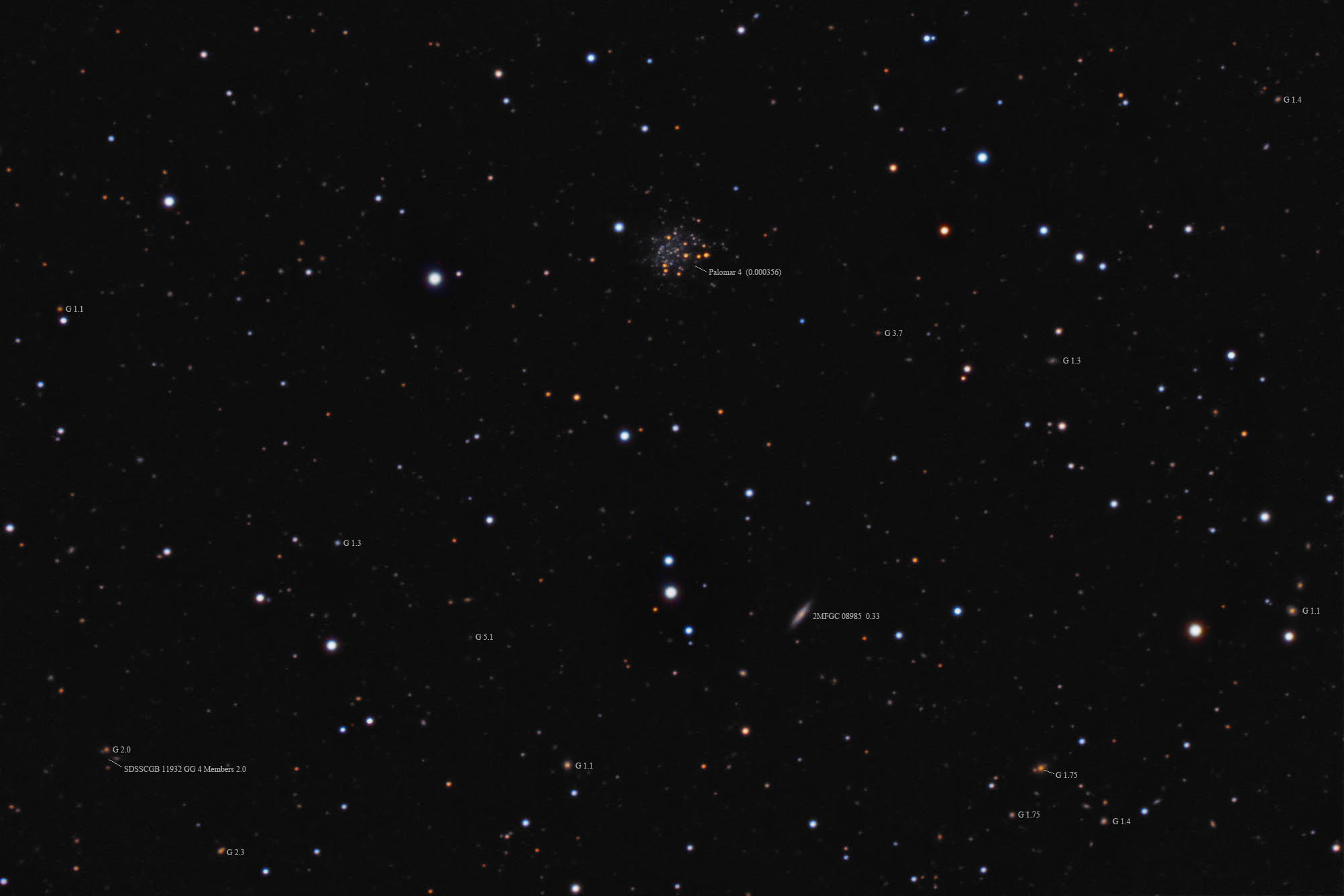