This is another nebula that\'s way too big for my scope -- IC 5070 -- the Pelican Nebula. So named because it looks like a pelican, even without much imagination. It is right beside another huge nebula, the North American Nebula which looks much like North America and Central America. They are really one big nebula with a dark nebula obscuring parts to make them appear as two different nebulae as well as giving them their distinctive shape. A shot of both can be seen at: http://www.skyfactory.org/ngc7000/ngc7000.htm

The Pelican is to the right of \"Florida\". If you zoom in on it you may even find the part of the back of the neck of the Pelican shown in my much larger scale image. What star or stars cause this nebula to glow seems unknown. I\'ve seen some say it is Deneb but the generally accepted distance to Deneb is a lot more distant than the generally accepted distance to the nebula making this impossible. Most say Deneb is 4 to 7 thousand light-years away while most peg the nebula at 1.5 to 3 thousand light years. Determining distance can be very difficult for objects such as this. For a close up of the same area, I photographed but by the 4 meter telescope (largest) on Kitt Peak see: http://antwrp.gsfc.nasa.gov/apod/ap031013.html
Click on the image for a full-size view that is oriented the same as mine. Their image is taken in the light of Silicon, hydrogen and oxygen to make an artificially colored image, silicon and hydrogen are both red while oxygen is a green tinted blue color so they change the hydrogen\'s color to blue for these images screwing up the colors but making it easier for the scientists. My shot is a standard LRGB image not isolating any element. Obviously, the hydrogen dominates as there\'s very little blue or green in my image. The full name is Pelican_L6X5R2X5GB3X5.jpg. One of my red images was lost to an airplane flying over with its landing lights on. It made using the image impossible. Even then I don\'t lack for red information! In areas where the obscuring matter is weak, you\'ll notice a tremendous number of new stars that have formed out of this nebula. In other areas there\'s so much obstruction there are few stars bright enough to shine through. Most seen in these areas are foreground stars. 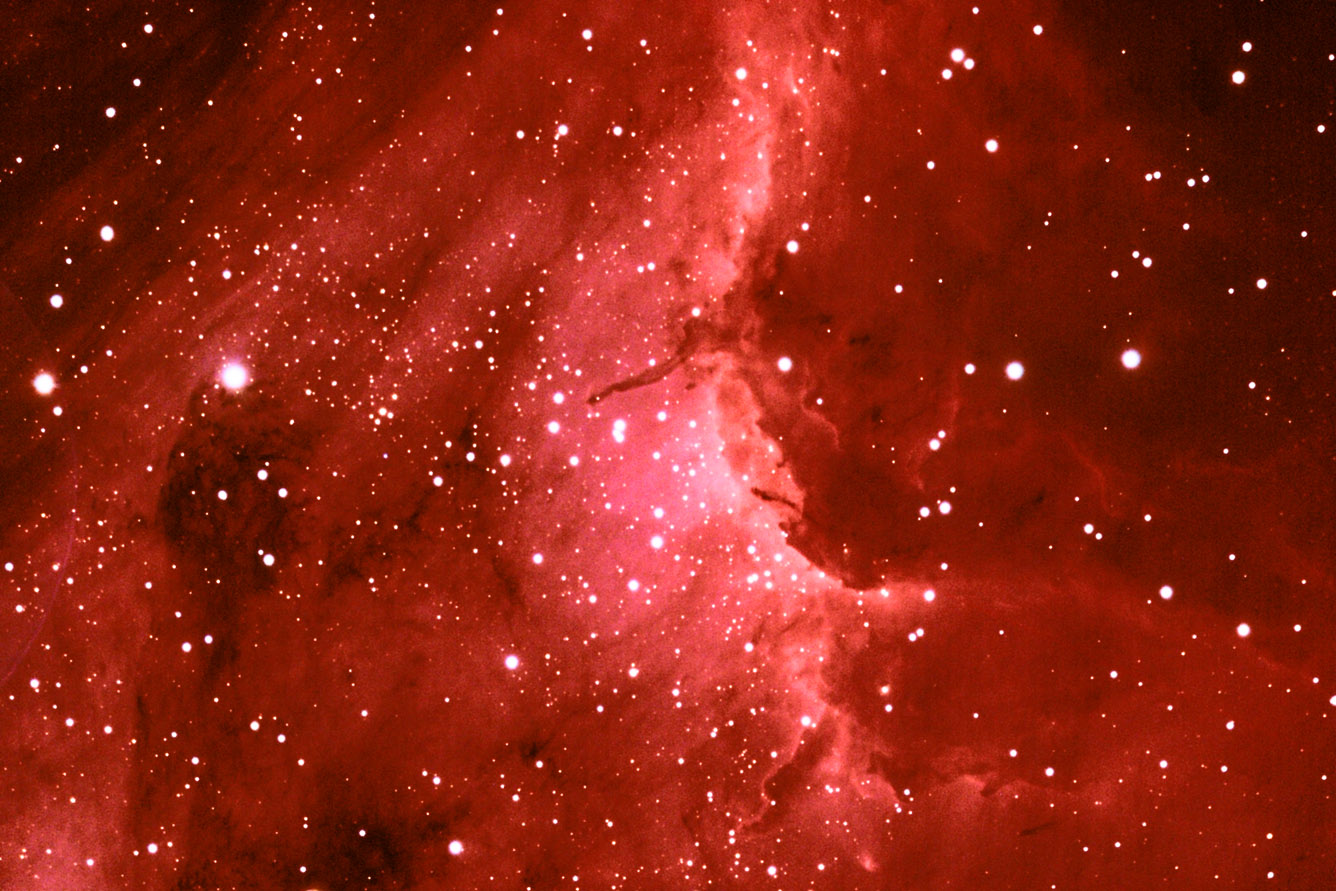