PGC 60230/CGCG 277-042 is a neat ring galaxy near the head of Draco about 41 million light-years distant by redshift measurement. It may be part of the SDSS-C4-DR3 3375 galaxy cluster which is anchored by NGC 6370, an elliptical galaxy in the upper right of my image below a nasty A2 blue star. Right beside CGCG 277-042 is a very low surface brightness messed up looking blue galaxy ASK 019673. Since rings of the type found here are sometimes considered caused by galaxy collisions I had hoped to find information on this pair. Unfortunately, I found virtually nothing. In fact, there are only 3 papers listed at SIMBAD on CGCG 277-042 and none on the companion. Of the three two are just a catalog entry and another providing better coordinates. The third is a study of this type of ring galaxies to try and find a way to separate those created by collision from other causes. CGCG 277-042 was one in the study but that\'s all. No findings on it at all other than it likely fits their expected conditions. http://cdsads.u-strasbg.fr/cgi-bin/nph-bib_query?2010MNRAS.403.1516S&db_key=AST&nosetcookie=1 Both of these could easily have made Arp\'s Atlas. He had a category for ring galaxies though it contains only 3, none of which have the core in the center. ASK 019673 at first glance looks a lot like Arp 338, the last one in his atlas. Though it is quite likely two superimposed galaxies, one face on and one edge on as both show a golden core which was lost in Arp\'s black and white image. It is also a red spiral. ASK 019673 looks to be a single galaxy and is very blue. To me ASK 019673 is the type of galaxy he apparently incorrectly thought he had in #338.

After striking out learning more about this neat galaxy I turned my attention on the rest of the field which, with the galaxy cluster, has a lot of interesting galaxies, including an entry in the Flat Galaxy Catalog, FGC 2132, that\'s likely a member of the cluster. MCG+10-25-021 is a strange disk galaxy well beyond the cluster that I\'d like to see more clearly but the star atop it doesn\'t help any.

There are 10 quasars and quasar candidates (UvES) in the image which is quite a ways above average. There may be an 11th toward the lower right. It is listed as both a galaxy and quasar. It seems more galaxy like to me. The broad line AGN classification for the galaxy may be more reasonable.

The A2 star sent some nasty reflections over much of the upper right quadrant. I removed some of it but some remains. In doing so I likely reduced the size of NGC 6370 somewhat. The same camera and filters on my 6\" f/4 don\'t create this issue so I have to figure the corrector of the SCT is somehow involved. 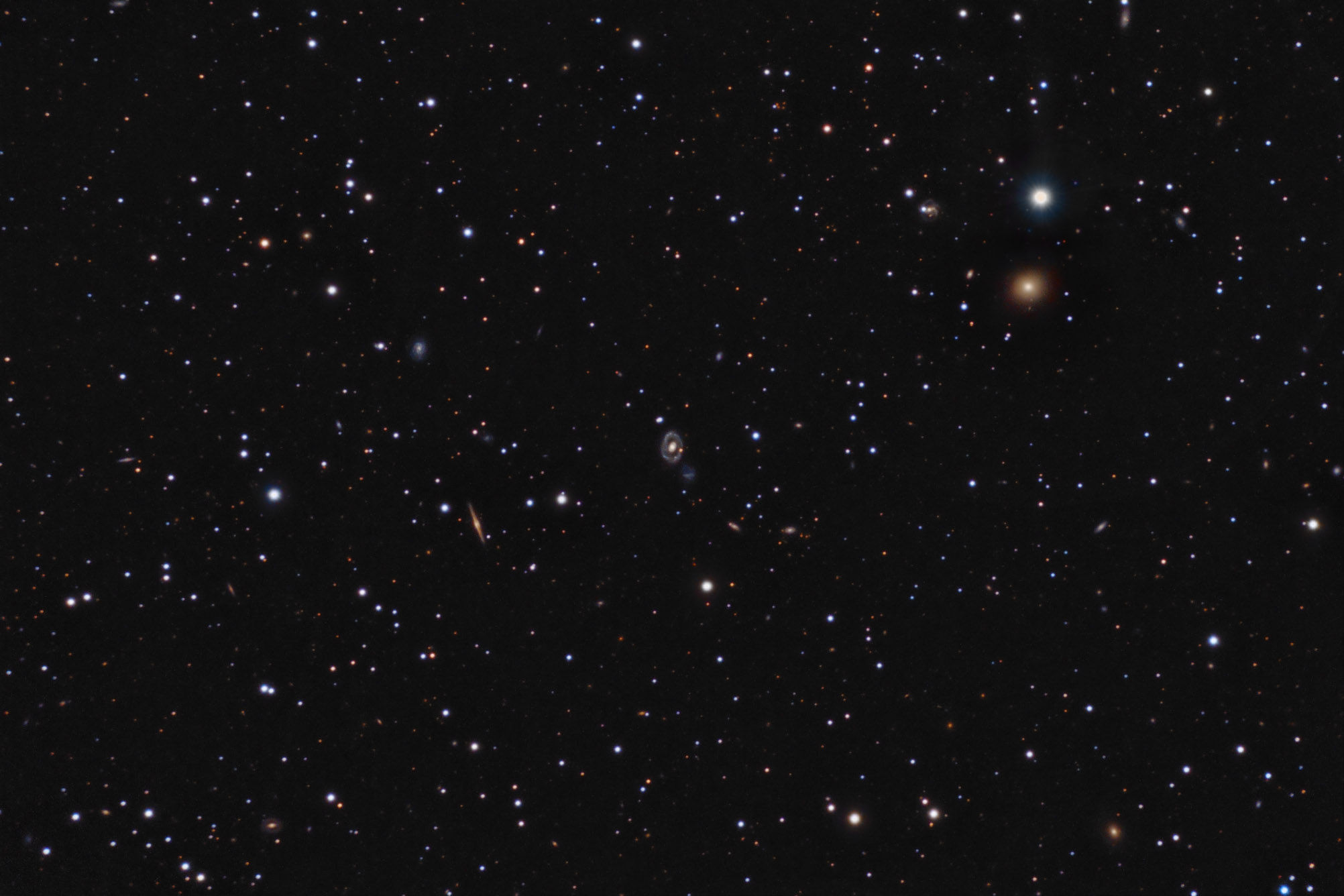 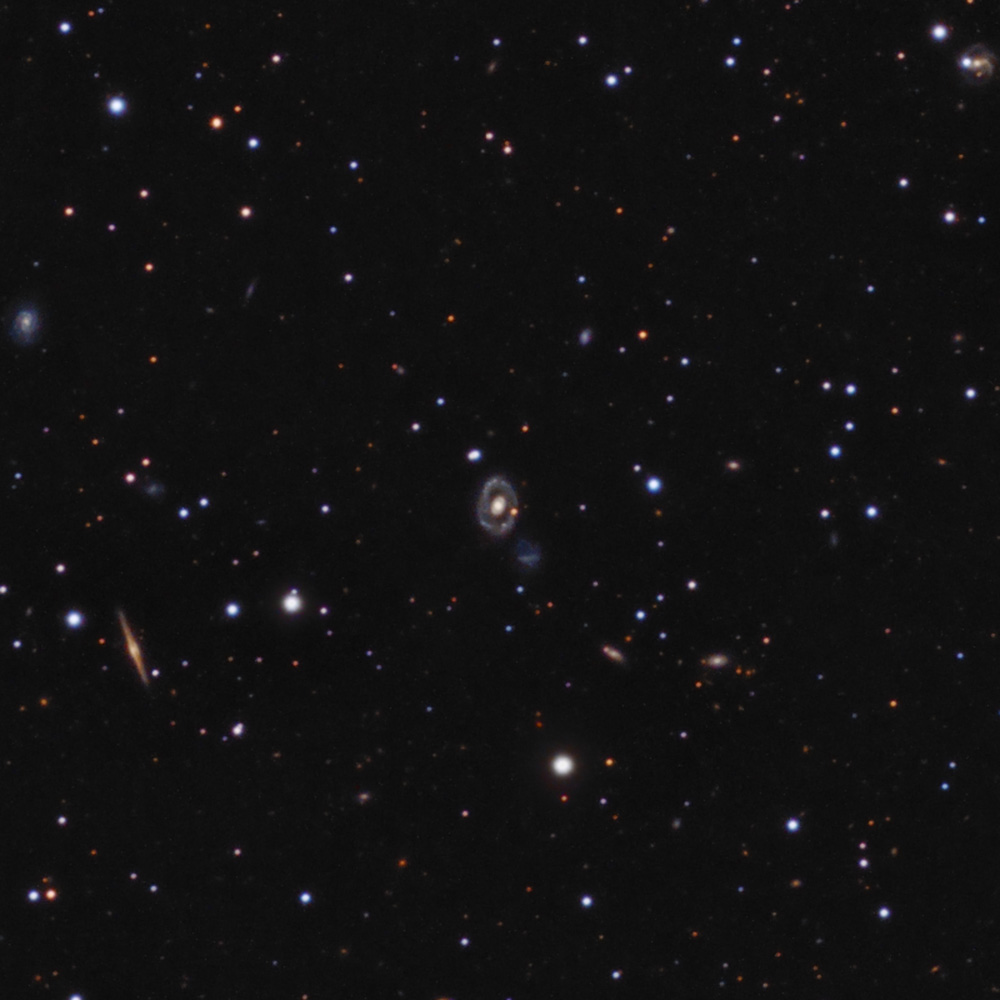 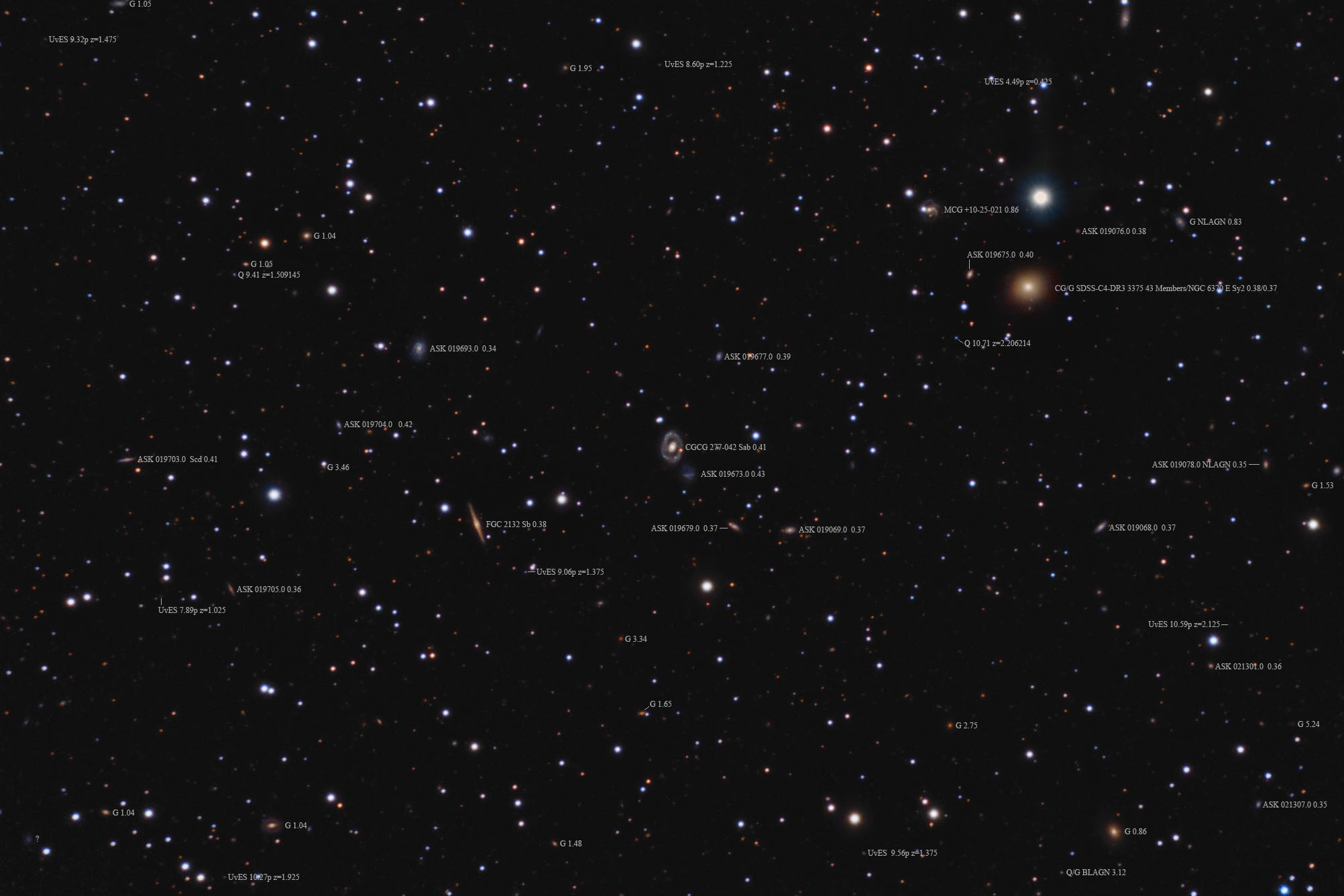