KUG 2348+270A also known as PGC 72600 is an Arp like galaxy that happens to be on the edge of the galaxy cluster Abell 2666. It is in Pegasus, about 350 million light-years distant. It\'s in the Great Square not far from Alpheratz (Alpha Andromedae). While I have many Abell clusters on the to-do list this came as a surprise. I raised KUG 2348+270A high to pick up much of the cluster but not so high vignetting reduced my ability to pick up the plumes. Arp put many galaxies with plumes just like this one on his list. He put them under many different categories however not realizing they were all caused by gravitational interaction with some other galaxy. In the case of KUG 2348+270A, the galaxy involved seems to have hit and run. Now there\'s a whole cluster of them to choose from. None of which seem all that disturbed. I suppose it could be a merger situation though I see no real evidence for this.

KUG 2348+270A has both a large but faint arm on its eastern side that wraps around under the galaxy then explodes in the plume as well as an odd arm pointing north (up) that also seems to have a lot of tidal stars pulled from it creating a puff of stars about it. The arms seem to create a ring that doesn\'t attach to the core. NED makes no attempt to classify it other than as a LINER spiral galaxy of magnitude 15. I see a hint of a bar running from the north-northwest to the south-southwest. I found no papers discussing either tidal feature. It has likely had an interaction with another member of Abell 2666.

Abell 2666 is described at NED as having a diameter of 50 minutes which puts its edges well beyond my field though it seems to have run out of members to the north at KUG 2348+270A\'s distance from its core. Its core as defined by NED is nearly the same as the cD galaxy anchoring the cluster, NGC 7768, a huge elliptical galaxy of 13th magnitude. It was discovered by John Herschel on September 6, 1828.

The field is outside the DR7 Sloan Survey area that has been picked up by NED. It is in the DR8 survey area that NED has not yet incorporated in its database. The Sloan image I\'ve included came from this later survey. Without Sloan data, I didn\'t expect much in the way of redshift data but apparently, the Abell 2666 cluster has been well studied making for a good deal of data on its galaxies. I\'ve identified all that are in my image that NED knows about. I even identified them along with showing their redshift light travel distance in billions of light-years. Some had no redshift data indicated by a question mark after the catalog name. I used the primary designation NED used so the catalogs are quite varied. Many are likely new to you.

Just east of NGC 7768 is a blue star-like object whose position matches that of 2MASX J23510292+2708335. It is listed also as a radio galaxy in the NRAO VLA Sky Survey. I find nothing on its visual or IR listing. By radio, it is listed as being from 5 to 10 seconds in size. Problem is that on my image it appears starlike with a PSF matching that of stars in the area. I see no galaxy. Adding to the problem is that its location has an error bar of 1.25 seconds. Nor does the DR8 survey show anything other than what appears to be a blue star at this position. I can\'t help but think something is in error here. I put 2 question marks after its designation for this reason.

In the lower right corner is the asteroid (19711) 1999 TG219 shining at an estimated 18th magnitude. It is partly overlapping a distant galaxy. 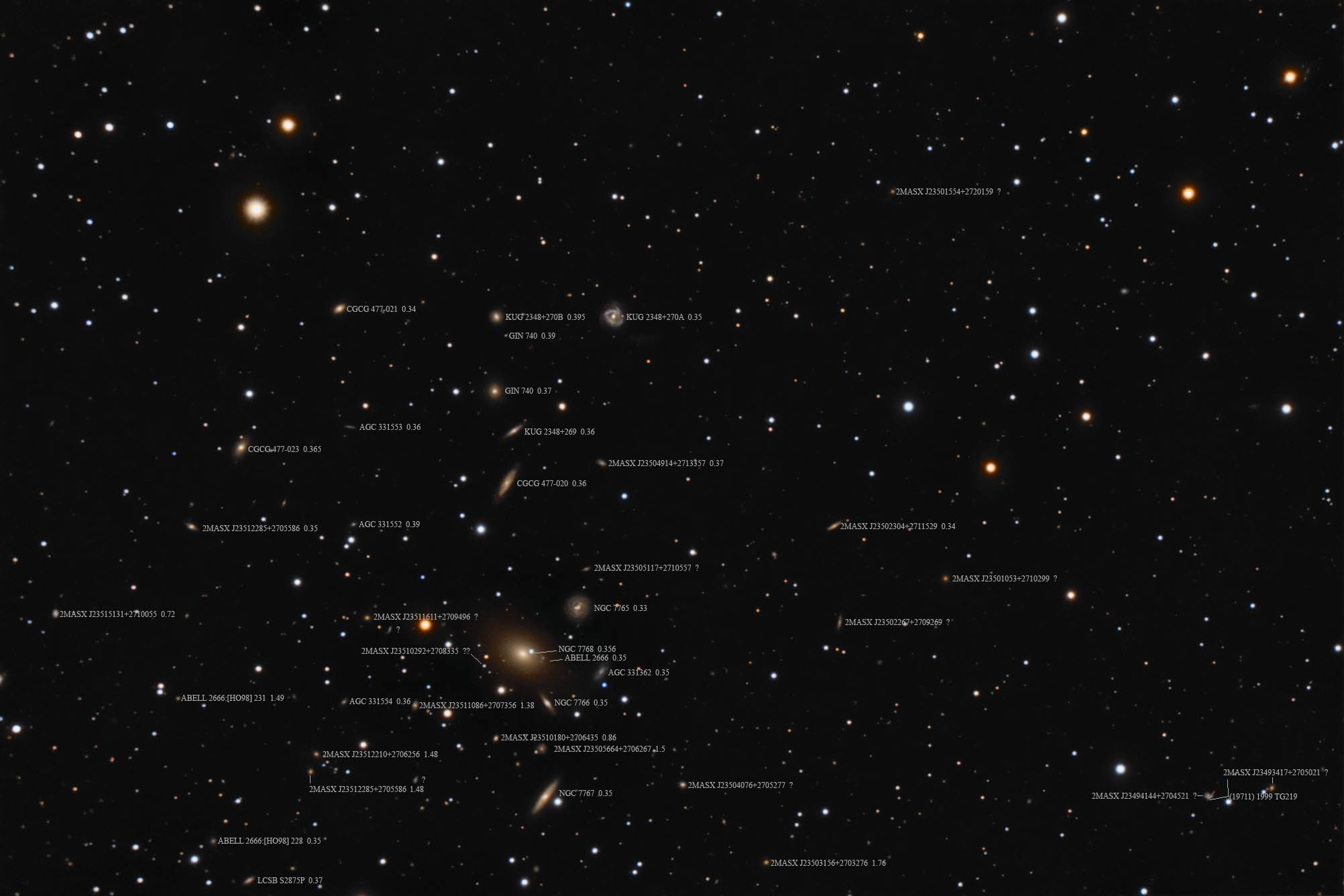 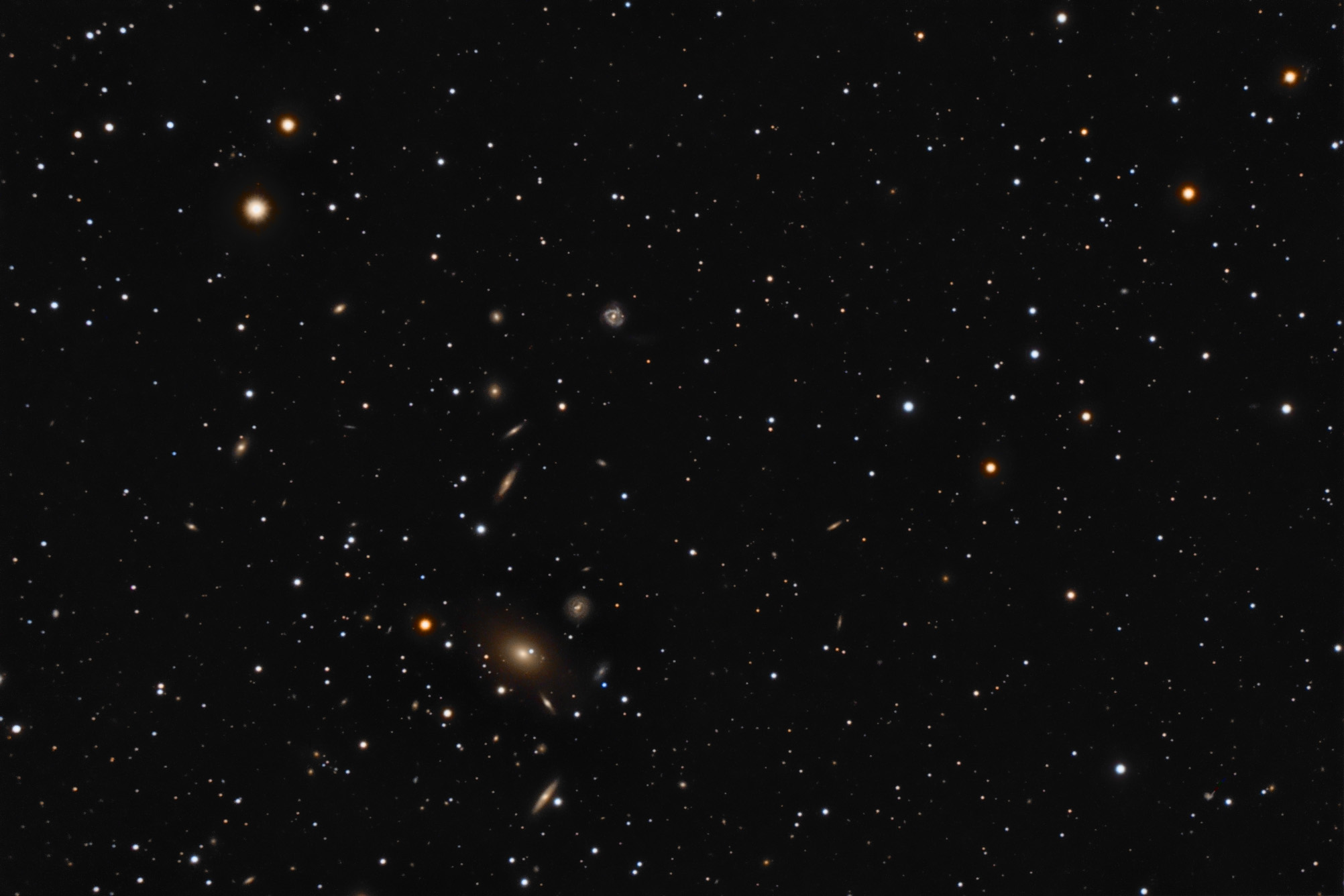 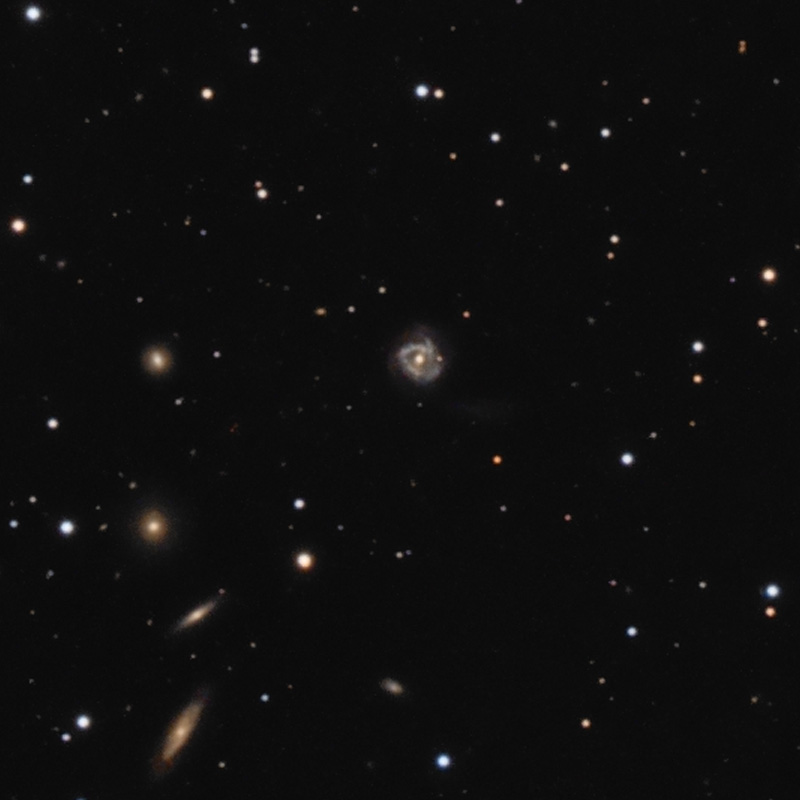