Abell 61 is a planetary in Cygnus near the northeast border with Lyra. It is about the size of the M97, the Owl Nebula, but much fainter. So faint nearly all the online images of it are narrow band. Being a contrarian I gave it a go with LRGB only and found it much easier than I expected if the weather hadn\'t have been a problem. Took me 3 nights to get what little data I did. Even then I screwed up and took some color data binned 3x3 and some binned 2x2. Of 19 color frames, only 5 were usable due to clouds. I got only 4 luminance frames and one of those was not very good but did help improve the signal to noise ratio but reduced resolution. I used it anyway. Color frames were one each at 3x3 binning and one of blue and green at 2x2. That\'s all I got that was usable. I need to revisit it as I think I can get far more detail with more frames. Still, considering conditions, this isn\'t as difficult an object as its reputation would indicate.

It\'s central star NSV 11917 is a variable star. Distances to planetary nebulae are usually very hard to pin down unless close enough for parallax measurements. I found two for this one. One said 850 parsecs (2800 light-years). Another, using a different method that tends to give a distance greater than parallax says 1400 +800 -500 parsecs (4600 +2600 -1600 light years). The 850 parsec estimate would fit within the error bar of the latter near the bottom end which is where parallax measurements fell so until something better comes along I\'ll go with the 850 parsec estimate. It is about 200\" of arc across in my image. At that distance, it would be 0.8 parsecs in diameter (2.6 light-years). That seems reasonable as well.
http://adsabs.harvard.edu/cgi-bin/nph-bib_query?2001A%26A...367..973N&db_key=AST

Several narrow band images show what the imager says is a strong H alpha signal but the above paper says this is NII rather than H alpha. So if imaging this one don\'t use a 3nm H alpha filter.

I couldn\'t find anything on the variability of the central star.

There are several galaxies in the image, one seen right through the planetary to the left of the central star. Unfortunately, most aren\'t listed in NED, including the one by the central star. Those that are listed are all in the 2MASS survey and thus strong in IR frequencies. None have even a magnitude listed let alone redshift data. The white galaxy below Abell 61 is 2MASX J19191643+4610542. Below it and to the right a bit is the very red spiral 2MASX J19191404+4608332/PGC 2276111. Down and left of it is a faint blue galaxy not in NED. Down and further left is a pair of blue galaxies. One an obvious blue galaxy, likely a spiral with a compact blue galaxy companion to its lower right. Neither of these are in NED. Directly left (east) of Abell 61 just before you get to a very bright blue star is 2MASX J19202393+4614166 hiding behind a field star. It is also known as PGC 2277772. There are several other red smudges listed at NED but nothing with any interesting information so I\'ll stop here. 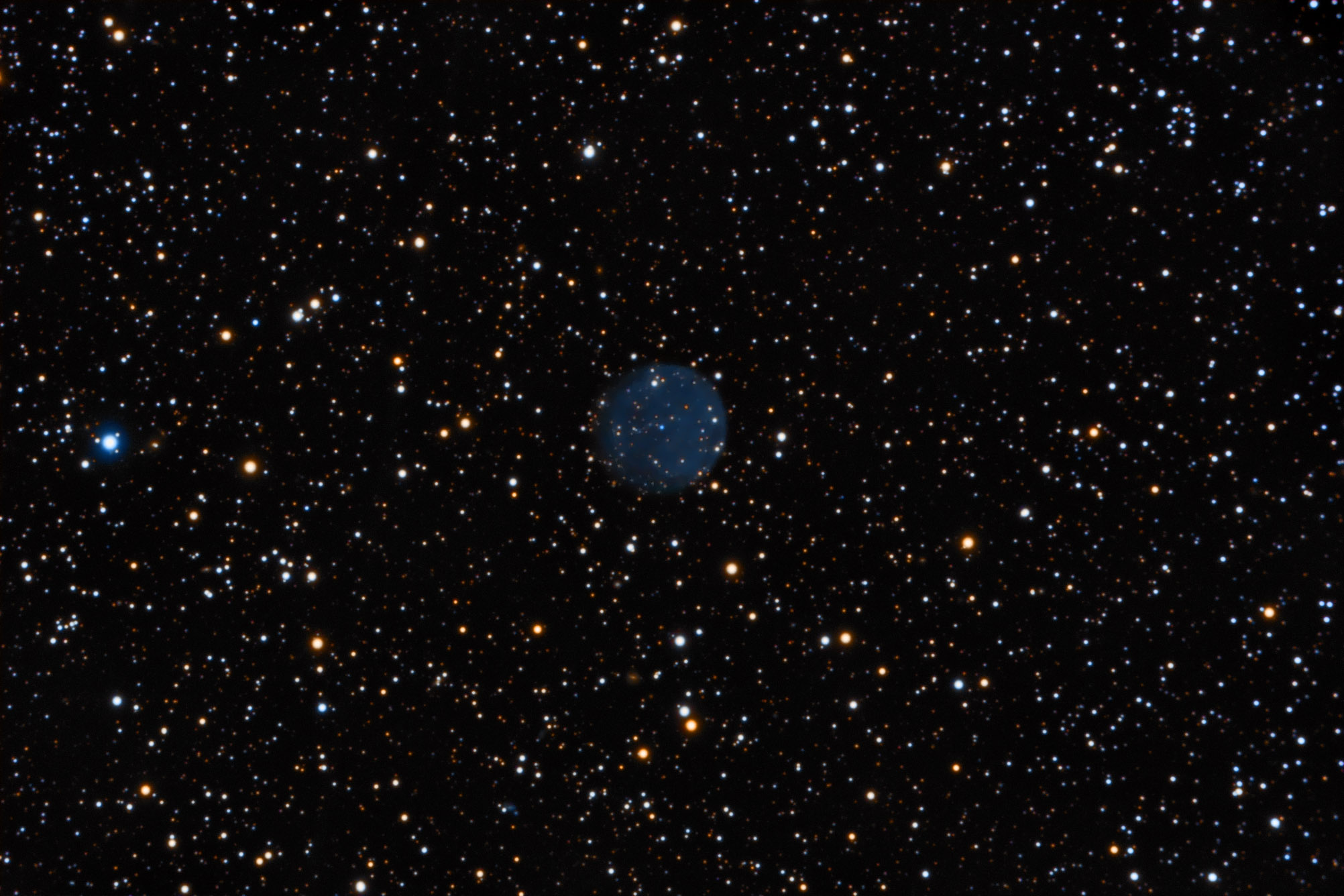