The planetary nebula Abell 69 is a very faint planetary in Cygnus about 60% of the way from NGC 6888 (the Crescent Nebula) and M29 so embedded in weak background H alpha emission that fills this area. Add to that this was taken two nights that everything went wrong. I\'m often asked if that happens and I have to say it is very rare except for clouds moving in on me of course. But as to goofs on my part, those rarely happen and never two nights in a row but boy did they for this one.

I had done some work on the scope and somehow the dew shield was removed but not reinstalled. Add to that that somehow the dew heater had been plugged into the side of the controller that was turned off. The controller can control two separate heaters but I only have one so the other side is off. Thus I had no heat and no shield. This was the night I took the LRGB data. I thought it weak. Next day I went out to the observatory and found the dew shield hadn\'t been put on. Aha, that allowed dew (I am running 20C above normal this winter) to form on the corrector. Even with heat I need the shield as well unless I turn on the heater so high it distorts the corrector. I reinstalled the heater and decided the RGB data would color the stars but I\'d have to use H alpha for the stars or retake the L channel. With weather issues the next clear night I took the H alpha. That too was weaker than it should have been. I saw that as the third frame came in. I went out to find the dew heater cold. Took me a bit to realize it was plugged into the wrong side of the controller. The corrector was frosty. I cleared it with a hair dryer but by then the planetary was way too low and it has been cloudy ever since or too far west when the weather did clear some nights. I never got more H alpha nor luminance I\'d wanted. It\'s now too far west for this year. I processed what I got. To add to the problems I somehow took the H alpha data using different center pointing coordinates. So I had to heavily crop the image. I guess I saved up all my goofs for this one object! Well not exactly. I tried for others with the dew shield and heater off that are so bad they will have to wait for next year. This was just the one that is sort of salvageable.

I find very little on this planetary. Visual observers, even in larger Dobs say it is very difficult and seen only fleetingly with averted vision. Even in a 30\" it was seen only 50% of the time http://www.cloudynights.com/topic/79580-cn-report-filter-performance-comparisons/#entry1047500 . The description misses that it is a ring and elongated. A 25\" failed totally at NSP http://www.cloudynights.com/topic/13464-finally-nsp-11-report-part-1/ . I found virtually no amateur images of this one for some reason. Most were wide field shots of NGC 6888 that picked it up as a tiny object near the edge of the field in narrowband images. Compared to those it came out far better than it deserved to.

I don\'t know if the apparent halo around the rectangular ring is part of the planetary or just a brighter area of the H alpha background -- or is it foreground? Anyone know? 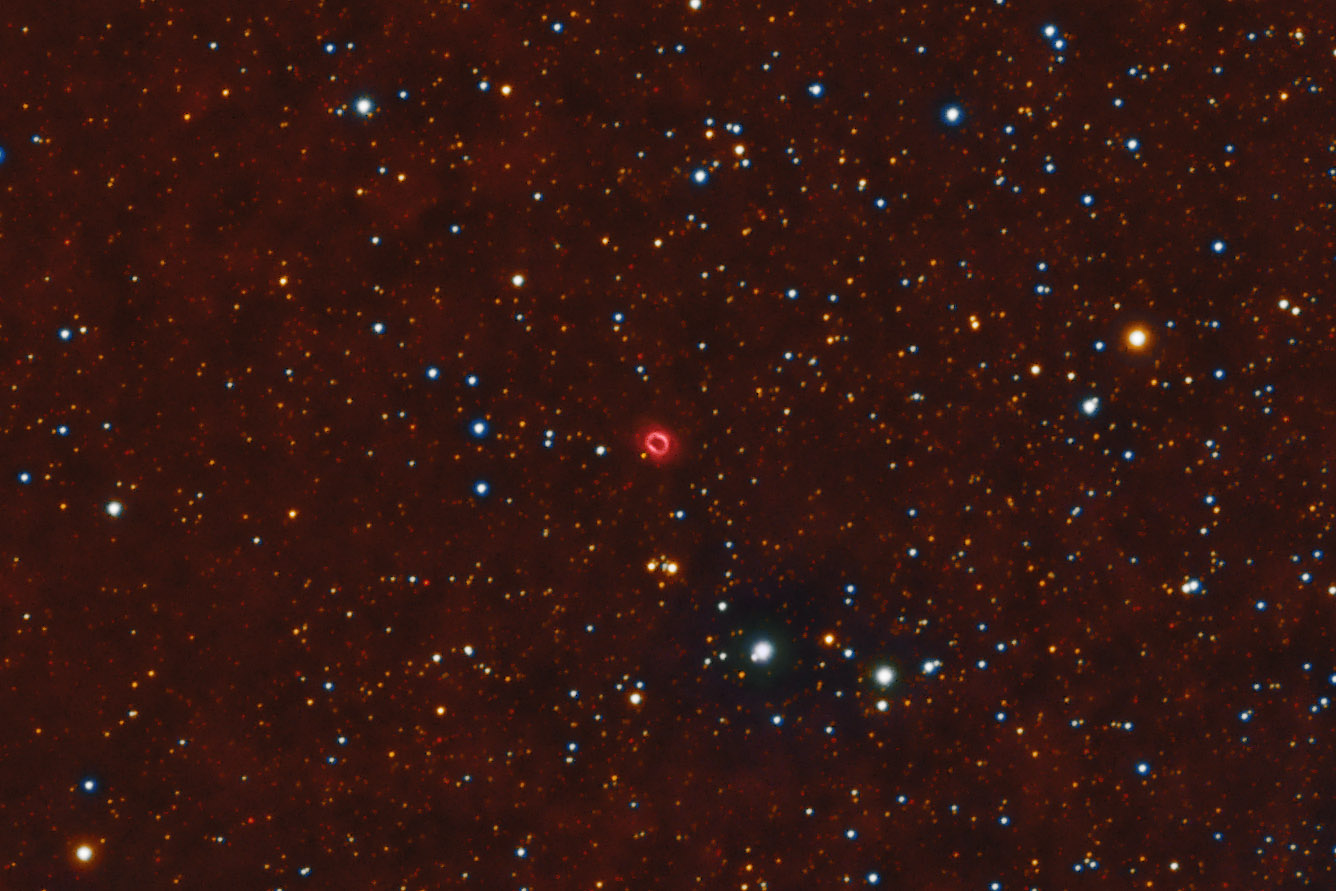