I know of nothing else like this object yet many of you probably never heard of it. Amateur images of it are rare. R Aquarii/HD 222800 is a most interesting variable star. It is a Mira type double star with a white dwarf companion with a period of around 44 years that can\'t be resolved (except maybe by the HST) but is seen in the spectrum. The pair form what is known as a symbiotic star at a distance of about 650 light-years from earth. The relationship has resulted in at least one, likely two, nova-like eruptions. The result of all this is a nebula around the star known as Cederblad 211 which consists of blue jets and red loops making for a very colorful nebula complex. There are two jets. The one running from the southwest to northeast is easy to see in my image. The smaller one going from the southeast to northwest is seen simply as making the star appear oval in shape. I was unable to resolve any more than that. The star is located at 15° south so down in my poor seeing low to the horizon. I had to try many nights just to get the seeing I did to capture this system. You can read a lot more about this star and nebula at http://www.aavso.org/vsots_raqr .

The star ranges rather widely in brightness. The minimum in current years is usually around magnitude 11 or lower but its brightest can hit 5th magnitude and it has been even brighter and dimmer. To best capture the nebula I had to wait for it to be near minimum which was only 1% of its normal brightest illumination. Unfortunately, conditions were poor at minimum I had to wait two weeks later when it was starting to rapidly brighten and move into my Meridian Tree. That meant fighting a moon, tree and the very short imaging time I have for objects this low. I had to go for it anyway or the star would be bright enough to cause real problems. Clouds then clobbered the green frames. One was sort of usable. Fortunately weak green is rather easy to compensate for. Especially since it has little green light. But, after years of trying I finally captured this elusive (for someone at my latitude) object.

The appearance of the nebula is said to change rather rapidly. Apparently, the illumination of it by the star is partly controlled by dust clouds moving around the star. As they move various parts of the nebula get more or less light. Unfortunately, this one is so low in my sky it is hard for me to get more than one night\'s view at a minimum when it isn\'t drowned out by a bright star. Though I suppose that too will change the nebula\'s appearance. Anyway, it is an interesting object to keep an eye on. I hope to revisit it again at another minimum. Hasn\'t happened as yet.

The HST probably has resolved the two stars. See this link for details: http://hubblesite.org/images/news/release/1990-15

I\'ve seen claims the nebula can\'t be seen visually. While small I find that surprising. Those with large Dobs might want to take on this challenge. I can see it being lost when the star is bright but at minimum, I\'d think it wouldn\'t be lost in the glare.

There are three asteroids in the image. All moving in direct motion which is rare for most of my images which have them moving in retrograde. So, in this case, they are moving from right to left. The one listed at 20th magnitude seems far fainter than what the Minor Planet Center predicted. The other two seem about right to me. It may be this one asteroid is very red and thus hitting the insensitive part of my chips response curve. Asteroid (76690) 2000 HZ73 passed right through a star. I\'d have passed it off as an edge on galaxy if not for the Minor Planet Center pointing to the linear part as being an asteroid. I doubt there was an eclipse of the star as it appears just north of the star.

Only two galaxies have redshift data in NED. Both in the lower left corner. But for the asteroids, I\'d not have made an annotated image. 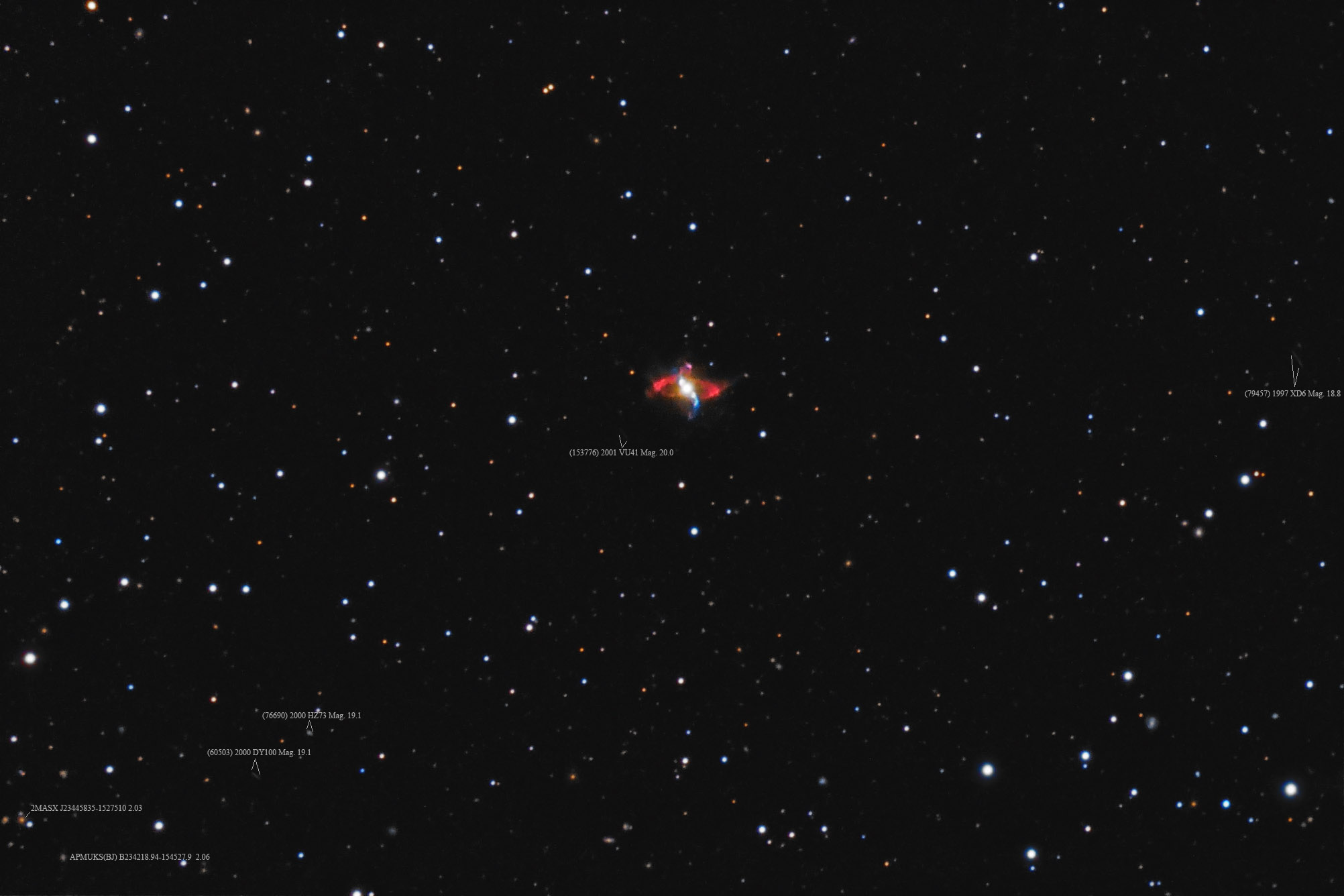 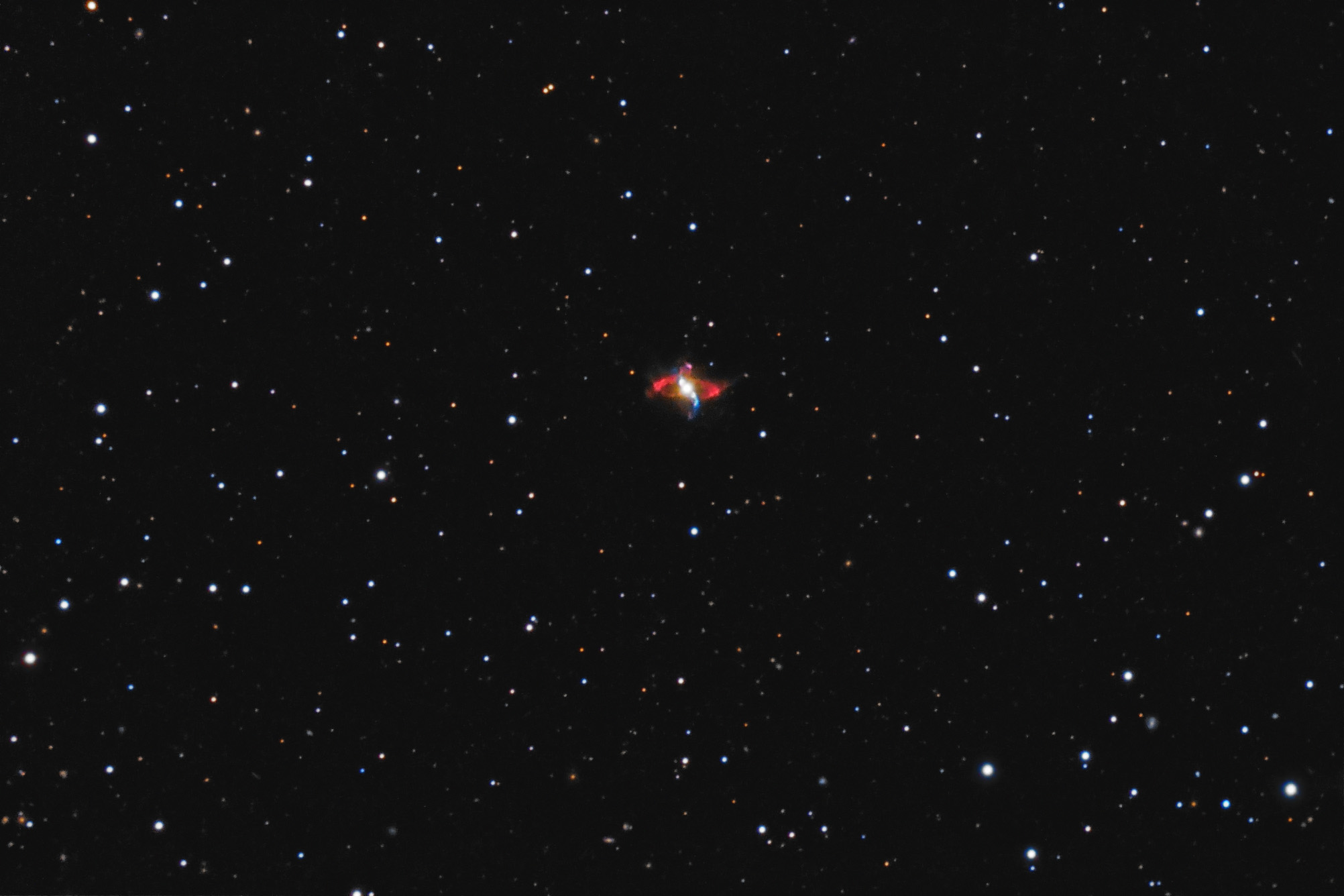