Sh2-116 is also known as Abell 71. It is \"embedded\" in the much larger SH2-115 which is centered well southeast of my image. Sh2-115 really needs to be shot in H alpha with a wide angle telescope. So its outskirts show up poorly in my image. I can\'t find much on this object, not even a distance estimate. It is located in Cygnus not far from Deneb which cast a nasty gradient across the image. Removing it without removing nebula covering the entire image wasn\'t easy nor done all that well. Another reason for H alpha data. Since the distance to Sh2-116 is unknown there\'s no way of knowing how it relates to Sh2-115 that is also in my image. It may be in front, in it or beyond it. No way to know. So the appearance of Sh2-116 being in Sh2-115 is likely only an illusion but there\'s no way to know for sure either way from what I could find.

I tried something different with the color data, taking only 1 20 minute image rather than 2 10 minute ones as I usually do. When putting the color together it really popped nicely. Usually, I have to enhance the color some but this time I actually turned it down slightly! Never had that happen before. A couple other images I\'ve taken this way did show better color but I still had to give it a bit of help. Why things were different this time I don\'t know.

Also, I tried 20 minute rather than 10 minute luminosity subs. This did bring up my background level some so I was closer to being sky limited as far as system noise was concerned though still quite far from it. But many stars saturated. This left me with great color in the bright stars in the RGB but all white in the saturated stars of the combined LRGB. So I reprocessed the luminosity image keeping the max level down to about 200 rather than the max of 255. Then when I added the color it worked well. I then used a mask to bring up the cores to 255 but keeping most of the star below this level. Lots of work but it did the trick. Doubt I\'ll use many more 20 minute subs for the L layer unless the star field is rather dim. Think I have a couple more shot this way to process, however.

Some images of this object show a green nebula just to it\'s east and an even brighter one well to the southwest. These images were made from DSS plates using a pseudo green created from the IR image. It appears that image picked up ghosts from Deneb that created nebula like ghosts the pseudo-green process turned into green nebula. That had me confused for a bit until I figured out what was going on with those images. 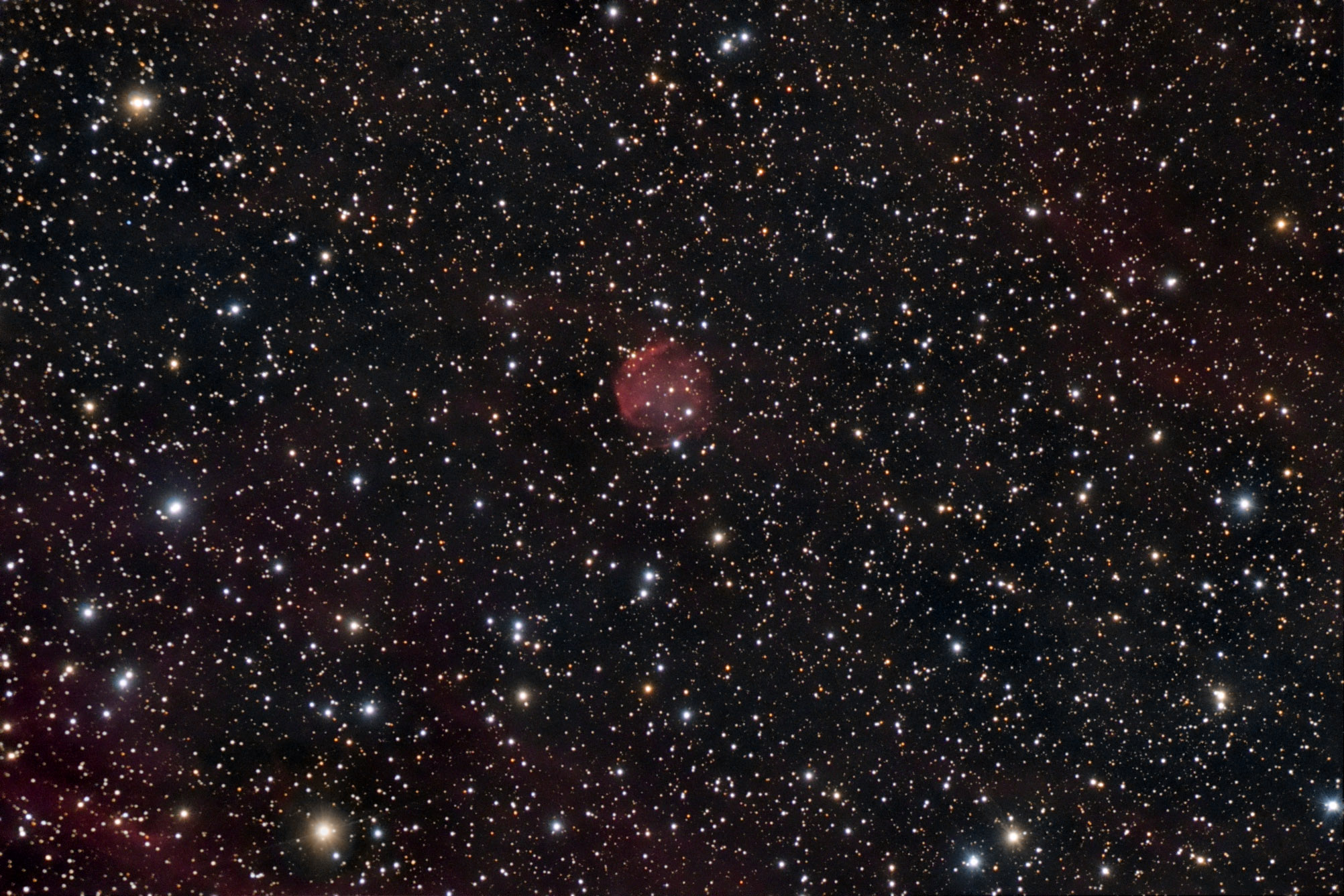