My target was originally UGC 01767 a very messed up galaxy. Or is it two galaxies? But when I looked at the field I saw another mess of a galaxy so moved the center a bit to catch it. But I moved 10 minutes instead 5 and saw what appeared to be two interacting galaxies so I centered so I could catch all three with room to spare on either side. Turns out there was also an odd apparent one armed spiral and a low surface brightness spiral as well. I ended up with lots of strange and messed up galaxies. All are in southeastern Andromeda just above Triangulum. Those with distance estimates fall into two groups, one at about 220 million light-years on the western side of the image (right) and the others at 280 million light-years on the eastern side (left).

Three of the western galaxies, UGC 1767, UGC 1172 and CGCG 523-011 constitute the galaxy group WBL 067. CGCG 523-011 is listed as the first of the three but has no redshift data so may or may not be a physical member of the group. It is listed as \"Compact\" though to my eye looks like a one armed spiral. Usually, compact galaxies have little detail being just bright small blobs with a sharp edge. This doesn\'t fit what I\'ve always considered a compact galaxy though does appear as one on the POSS plates which may explain its classification. If it is a member at 220 million light-years it is 27,000 light-years across. That size is typical of many compact galaxies.

As mentioned my main target was UGC 1767. It is classified as an irregular Magellanic type galaxy by NED though the one note at NED calls it a disrupted spiral. It looks almost like two spirals, one above the other both of which have been disrupted by the interaction, the lower smaller one more torn up. I couldn\'t find that anyone had really studied this or any other galaxy in the image. I measure its size at just under 80,000 light-years.

The third member of the WBL 068 group is UGC 01772 with the listing as possibly an irregular galaxy. The one note at NED says: \"Blue very blue main body 0.50 x 0.45, extremely diffuse outskirts, no evidence of spiral structure.\" To me, it looks much like a three armed spiral. It has an obvious red core and blue arms that spiral out. Again these aren\'t seen in the POSS images very well. If that\'s what was looked at, I find little in the way of images of any part of this field but survey images, that may explain this note. I measure its size at 55,000 light-years.

The fourth galaxy of any note in the right side of the image is UGC 1771 a very low surface brightness spiral. So low it didn\'t show in my framing image enough for me to notice it. It is not classified at NED though certainly shows a faint spiral structure and well defined elongated core that may indicate it is a barred spiral. I\'d need many more hours of exposure time to see much more. Redshift puts it at 190,000 light-years. So it may not be a physical member of the two with redshift data. Due to how its edges fade away my measurement of its size is pretty fuzzy at 75,000 light-years. I suspect a longer exposure would show it larger than that. I define the edge as where the ADU count reaches 15 above average background using a median 3 pixel filter to smooth out differences in both object and background, in case you are curious.

On the eastern side of the image are two of the three galaxies in WBL 068. UGC 01787 is the first member of the group which is listed at 280 million light-years. It is an Sd galaxy of the Magellanic type, meaning messed up. That is likely due to its companion on its east end. Both have virtually the same redshift so are likely an interacting pair. Unfortunately, the main galaxy is seen mostly edge on so hard to make out exactly what it looks like. The overlap with the companion makes measuring its size impossible as the eastern end appears hidden behind the companion. Assuming the eastern side is symmetrical to the western (likely untrue if these are an interacting pair) I get a size of 76,000 light-years. The second member of the WBL 068 group is the edge on NGC 891 look-a-like, UGC 1793. It is listed as an Scd: spiral. It too is about 76,000 light-years across. The third member lies well east of the edge of my field. No way I could catch it and still get UGC 1767 which was my main target. It doesn\'t look all that interesting on the POSS plates but then neither did those in the WBL 067 group. Maybe next year I can check to see if it is worth adding to the object list.

Nothing else is listed with redshift data. In fact, the remaining galaxies that have any size at all to them are not even in NED as galaxies, just as objects seen by the GALEX UV satellite. As such they are listed by coordinates with no data, not even a magnitude. I didn\'t bother annotating them. For the constellation with likely the most famous galaxy of them all, besides our own, a surprisingly few have any data on them but for the major ones. 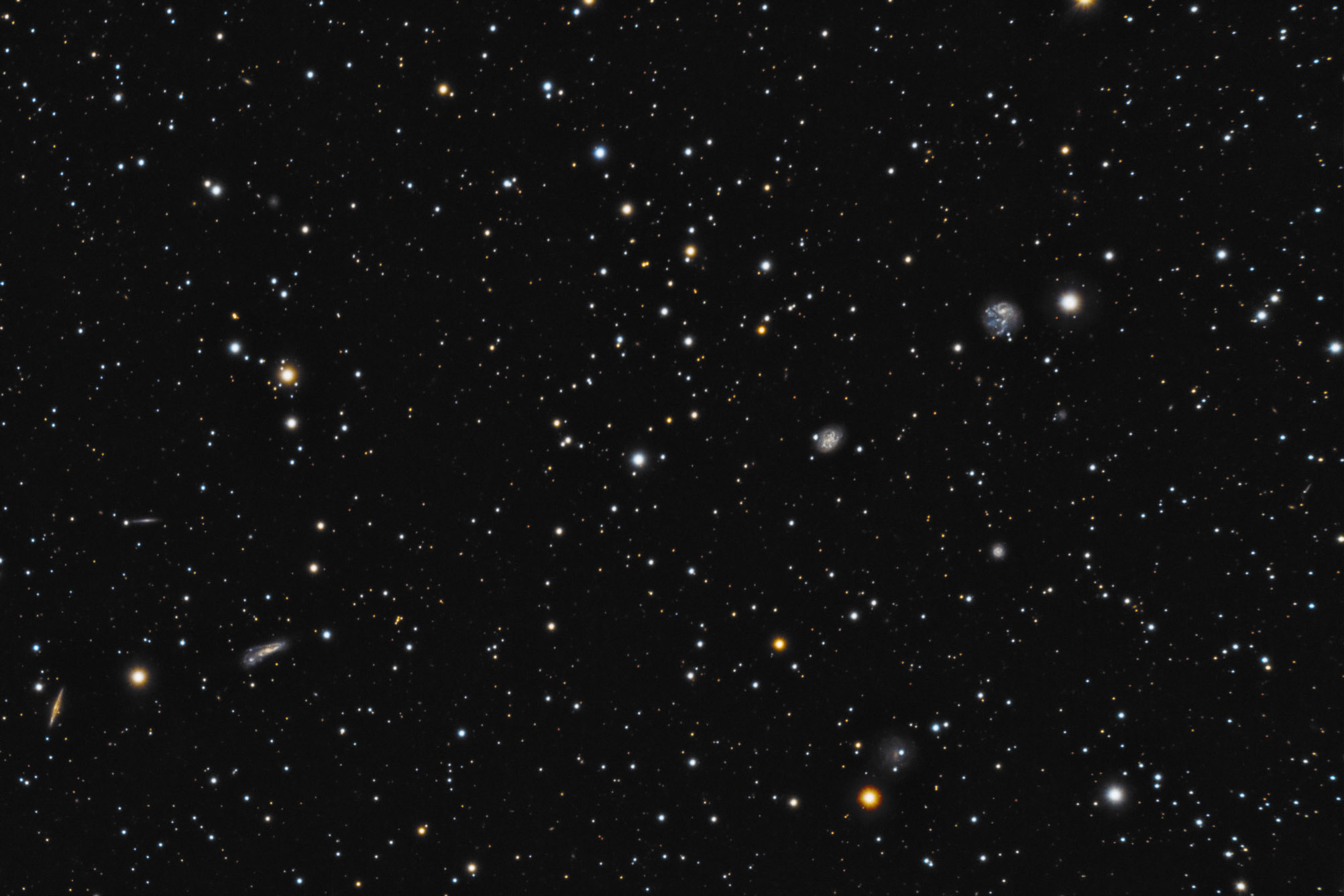 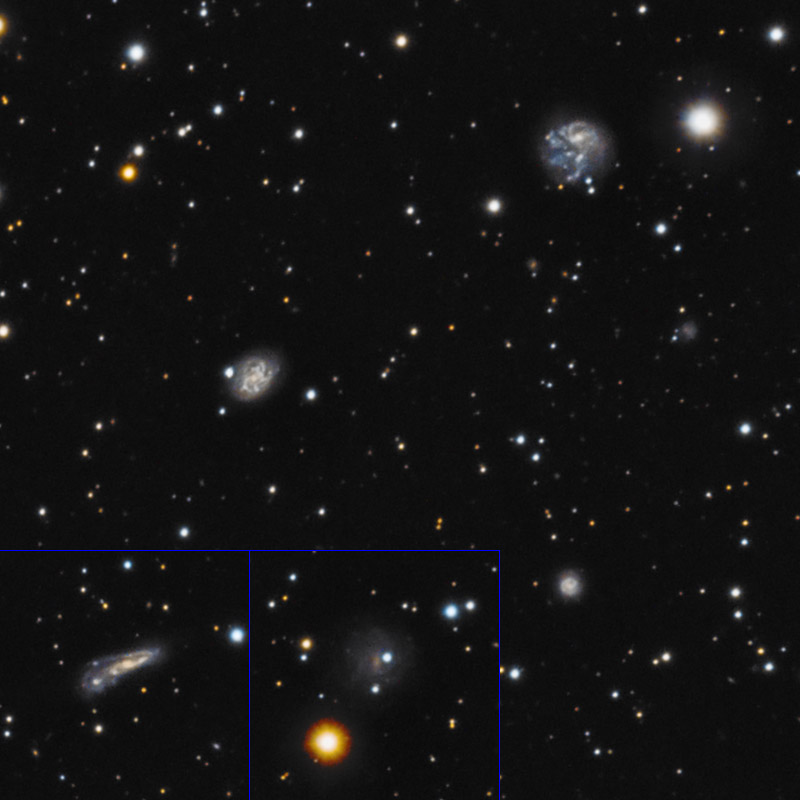 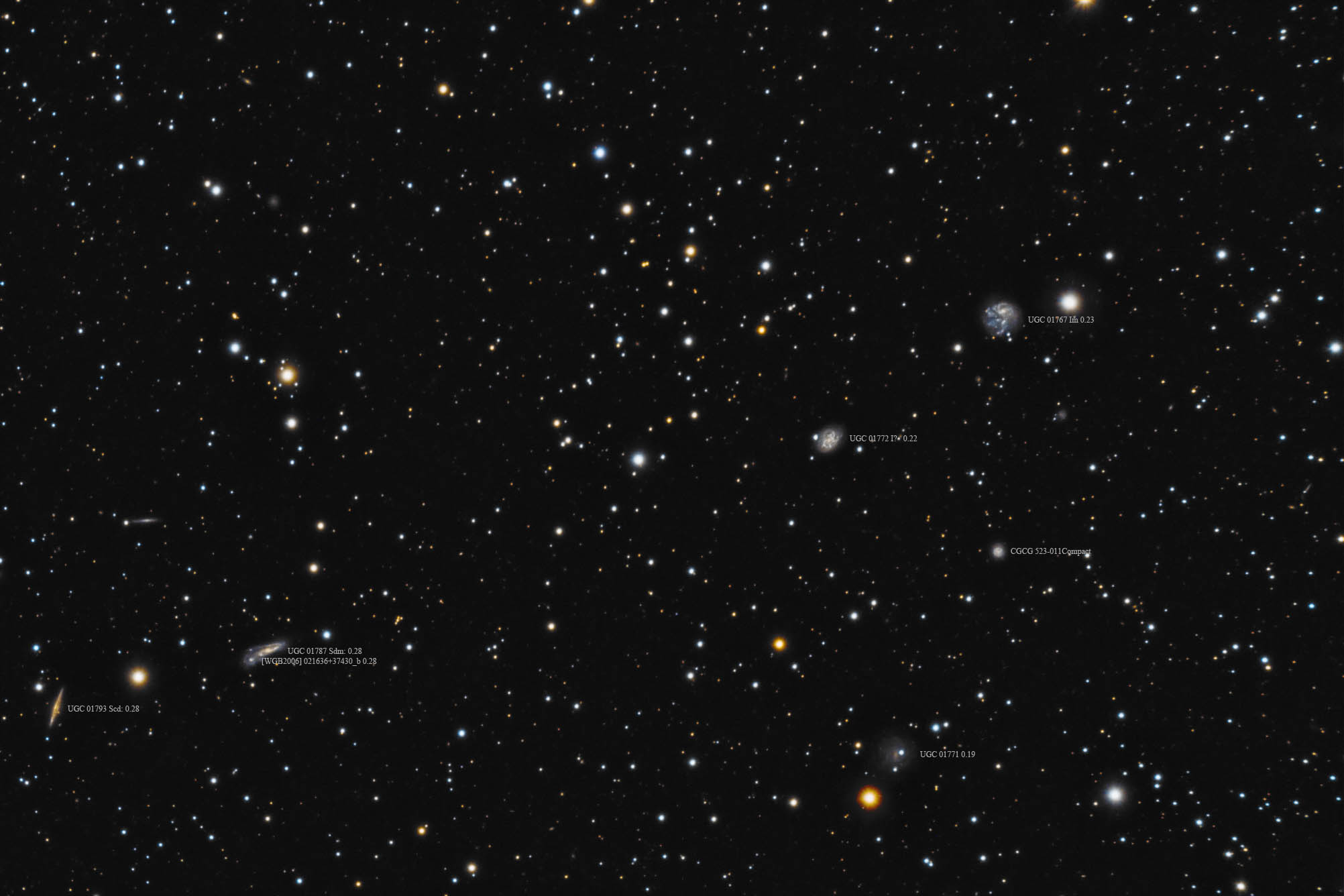