Another site (http://adsabs.harvard.edu/full/1985A%26A...146..213R) says the distance is 118 Mpc (384 million light-years) but this uses an old now disproved Hubble constant. Using this inflated distance they put it at 80 kpc (260 thousand light-years) radius or 520 thousand in diameter. Adjust this for the currently accepted distance of 260 million light-years and the size is 350 thousand light-years. We seem to have the incredible shrinking galaxy here. This agrees with my size estimate of 4.8\' using the longest radius in my image when stretched far more than in the attached image. In kpc, the diameter is about 110 kpc (360,000 light-years). Very large but not the humungous galaxy often quoted. In any case, it is still a monster spiral. Is it the largest known? That I can\'t say. It is as large or larger than any I know of. Some ellipticals are larger, however.

The field is heavily obscured, at least 1 magnitude. So is it larger than we can see because of this? I checked radio and IR references. Radio and IR see it about the same as my image so while obscured we are seeing the majority of the galaxy.

These sites also make claims the galaxy has rotated 12, 10, 8 and 5 times (various papers I found). These assume the galaxy has been around since the beginning of the universe. Some of the difference in estimates has to do with the accepted value for Hubble time at the date of the paper\'s publication but it can\'t begin to explain the wide variation given. To compare our sun, if it and our galaxy had existed for the 13.7 billion years of the universe. It would have rotated over 60 times.

This galaxy is also trotted out by supporters of MOND an alternate gravity theory used to deny dark energy. How much their argument relies on the overestimate of its size I don\'t know. But all start out touting its super large size so I suspect it is important to their argument. I have to admit I got lost in their papers so this might be an incorrect assumption.

The weirdness doesn\'t stop there. For some unexplained reason, NED has the wrong coordinates for this galaxy. A case of close but no cigar. There is a very bright orange star at the northeast end of the densest part of its disk. Between it and the actual core are two fainter stars. the lower bluer. This one is at the exact position NED shows for the galaxy! At the position of the core, they show [WGB2006] 034948+35270_a with no size or magnitude data. Other than the size being slightly small for their misplaced UGC 2885 everything else seems reasonable. Likely they interchanged these two objects. So is that blue star really a galaxy? I doubt it. The PSF matches similarly bright stars. A minor error but considering what I\'d already found it rather surprised me that the errors continue.

Off the southwest end of the galaxy is LEDA 213253/2MASX J03525142+3534301 an IR rich galaxy. It shares a similar redshift value to UGC 2885 so is likely related. While there are 12 other identified galaxies in my field at NED all from the 2MASS IR catalog, none with much information so I didn\'t bother with an annotated image.

Some of the dust that obscures the galaxy is seen as a slight bluish glow on the right side of the image. On the right edge is a reddish streak coming in to a small galaxy. This caused by a star off the frame hitting something in the camera and reflecting in to the field. A blue star does the same from the top edge of my image. 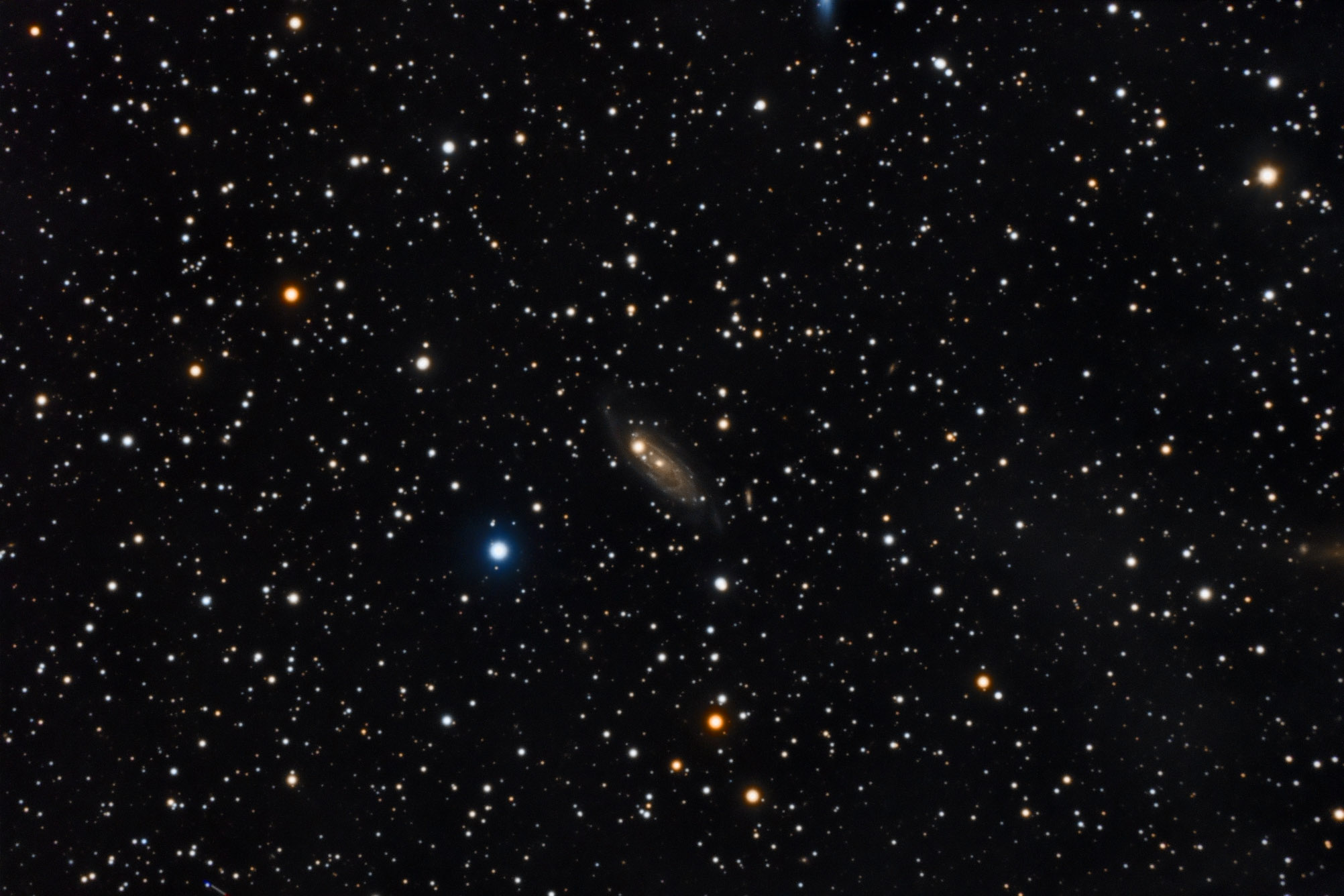