UGC 3697/FGC 601 is commonly known as the Integral Sign Galaxy. Oddly, Arp had 6 galaxies in his category for integral sign shaped galaxies but omitted this one. To most observers UGC 3697 better fits the category than any Arp included. Why he omitted it is unknown. He included many very well known galaxies including 11 entries for Messier galaxies so apparently being well known didn\'t prevent it from being an entry. Maybe because it was well known for that trait? It\'s been a mystery to me.

I had this one on my to-do list twice but couldn\'t reach it due to my Polaris trees until recently. It was on both for being distorted and for being in the Flat Galaxy catalog. It\'s the size of the central bulge compared to the length of the disk that qualifies a galaxy for the FGC catalog so the warping of it is ignored. Since it\'s bulge is less than 12.5% of its length it qualifies warped or not. In fact it has little discernible bulge in my image. It is one of a trio of galaxies known as WBL 132. They form a chain starting with UGC 3697 and going southeast to UGC 3714 and ending with the tiny (in angular size) KUG 0707+717. With no redshift for the latter I can\'t say if it is physically related or not. I doubt it is.

The first two are both about 140 million light-years distant by redshift and both are distorted looking. The disk of the Integral Sign Galaxy has been warped into about the shape of that mathematical sign with bright star knots, especially at the western end. UGC 3714 is a face on spiral with a huge outer halo normally not seen in such otherwise rather normal galaxies. It appears the halo is spherical as the spiral features seem partly hidden by the \"fog\" of the halo stars giving it an indistinct spiral appearance. NED classes it as S? pec. Looks pretty much like Sab or Sb to me. Not sure why the ? though the pec is likely due to the large apparently spherical halo. Film images of it show only hints of its spiral structure so might be why it couldn\'t be classed further. The Integral Sign Galaxy is classed as Sd: Pec. Obviously for its warped disk. It is quite likely the distortions of these two are due, at least in part, to interaction between them in the recent past.

The third member of the group, KUG 0707+717, has little info at NED. They class it as simply Spiral. It appears to be near edge on though there\'s a hint of detail. It too seems to have a halo about it though much smaller than that of UGC 3714.

West southwest from UGC 3714 is a blue irregular galaxy. NED omits it entirely. Is it naturally this way or did it interact with one or more of the WBL 132 members? I suspect if seen more closely it would be quite an interesting galaxy. The little edge on spiral west of UGC 3714 is 2MASX J07120524+7145290. There\'s little else on it however. 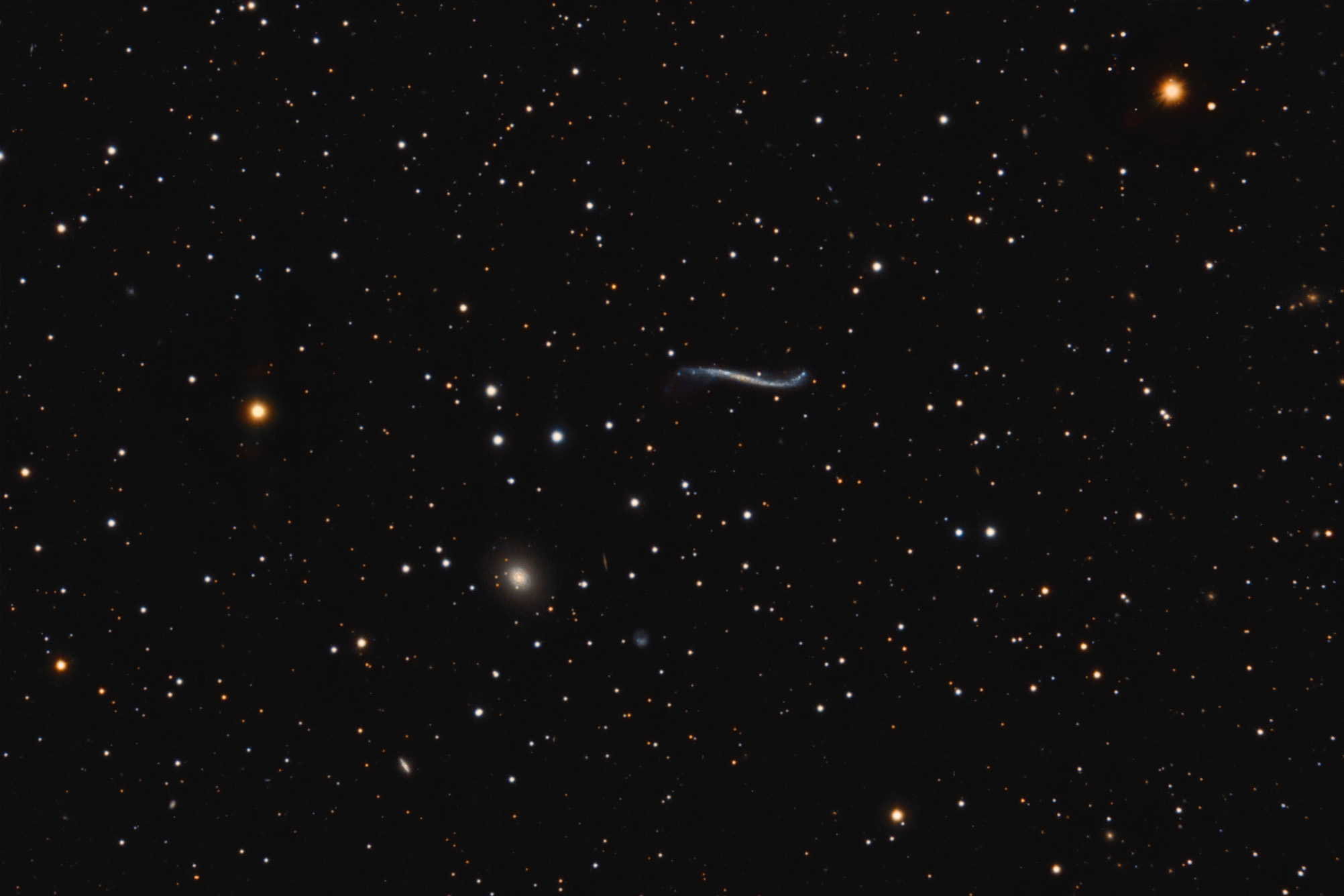 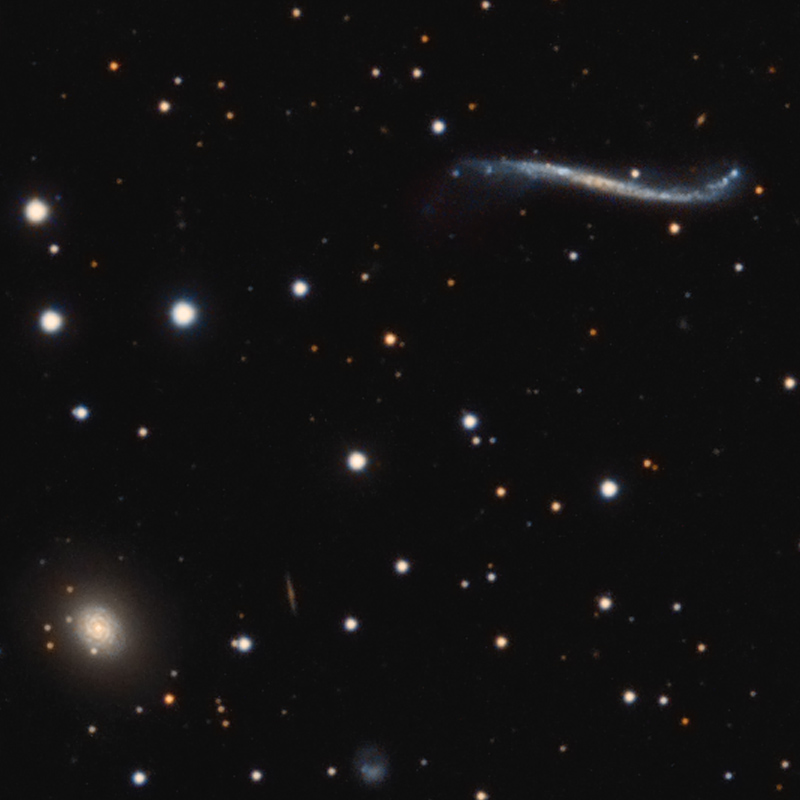 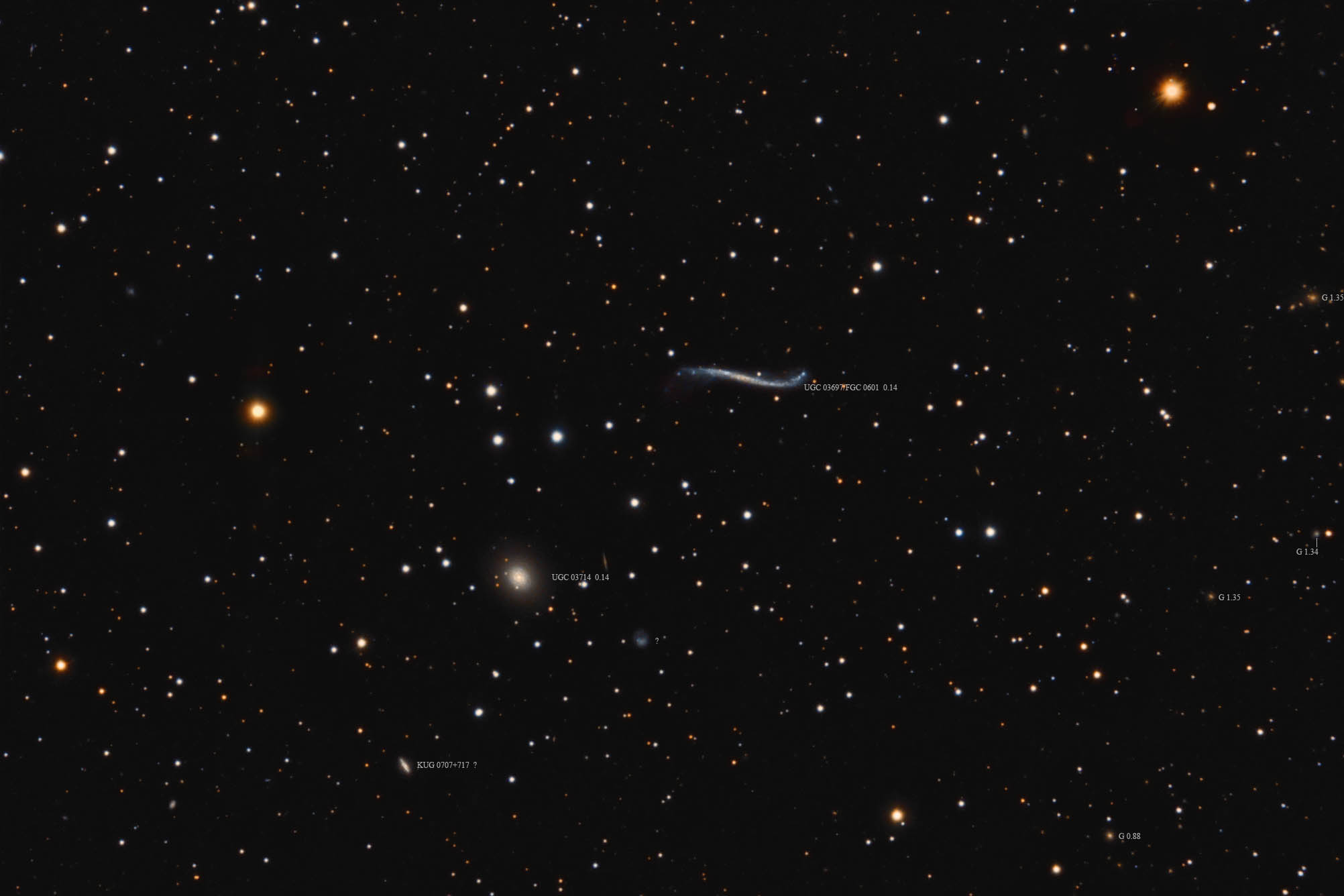