UGC 4879 is a very lonely irregular dwarf galaxy on the very edge of the local group. We see it in western Ursa Major above its front legs. NED puts it at a distance of 4 million light-years by redshift and 4.2 million by non-redshift measurements. Modern papers I found say 4.5 million while the HST site agrees with NED at 4 million. Even rather close our distance estimates vary by more than 10%. It is a dwarf galaxy easily resolved by the HST but not by me on the below average seeing night I took it. Several star clusters in the galaxy appear as stars in my image. The galaxy itself is mottled but not resolved. Its nearest neighbor, Leo A is 2.3 million light-years from it. For this reason, it likely hasn\'t interacted with another galaxy for many billions of years. It shows evidence of star formation for the first 4 billion years of its existence then little or none for the next 9 billion years. That leaves only a few hundred million years for it to have formed the blue stars that so dominate my image. One paper said it has no dust or gas left. If correct star formation has come to a halt in this galaxy again.

Two other UGC galaxies are in the image. UGC 04906 was also on my to-do list but as a flat galaxy under the designation of 2MFGC 07220. It is 110 million light-years distant and seen rather close to edge-on. Its core is a narrow line AGN meaning it is quite active. It is classified as an Sa galaxy. Below it is UGC 04913. It is classified as Sc (f) and is about the same distance as UGC 04906. They are likely members of their own local group.

Toward the upper right corner is ASK 089514.0. It is classified as Sm and has a redshift that puts it 350 million light-years distant. It seems to be a sloshed galaxy in that most of the disk, bright enough to be seen in any image of it I found (not many) lies to the west of its nucleus. Very few stars are visible in what should be its eastern half. I found no attempt to explain this. Usually, it is caused by interaction with another galaxy. One possible culprit is NGC 26000 out of my field to the west. It has a redshift distance of 340 million light-years. I see no sign of distortion in the POSS images of it but it is likely much more massive than ASK 089514.0. This mass difference may allow it to disturb ASK 089514.0 without harming itself. It\'s a featureless S0-: galaxy.

A large galaxy group is marked above and right of UGC 04913. It is anchored by ASK 089787.0. NED gives a membership count of 35 members but no size. Many galaxies about this distance can be found across the image. A second cluster at about the same distance with 23 members is at the top of the image. Are these related? I have to think so. On the right edge above the centerline are three galaxies at a distance of 1.28 billion light-years. A search within 30 minutes of this trio turned up nothing at NED with a redshift distance similar to these three.

While I see an asteroid in the HST image none were seen in any of my frames. Most of the galaxies with redshift data I was able to label lie in a diagonal path from the lower left to upper right. I\'ve noticed many times my annotation runs in a path of some direction across the image. Since they lie at many different distances I find this odd. It might be due to how the fields to get redshift data for are picked. Maybe they are just an isolated group of three galaxies almost as lonely as UGC 4879. 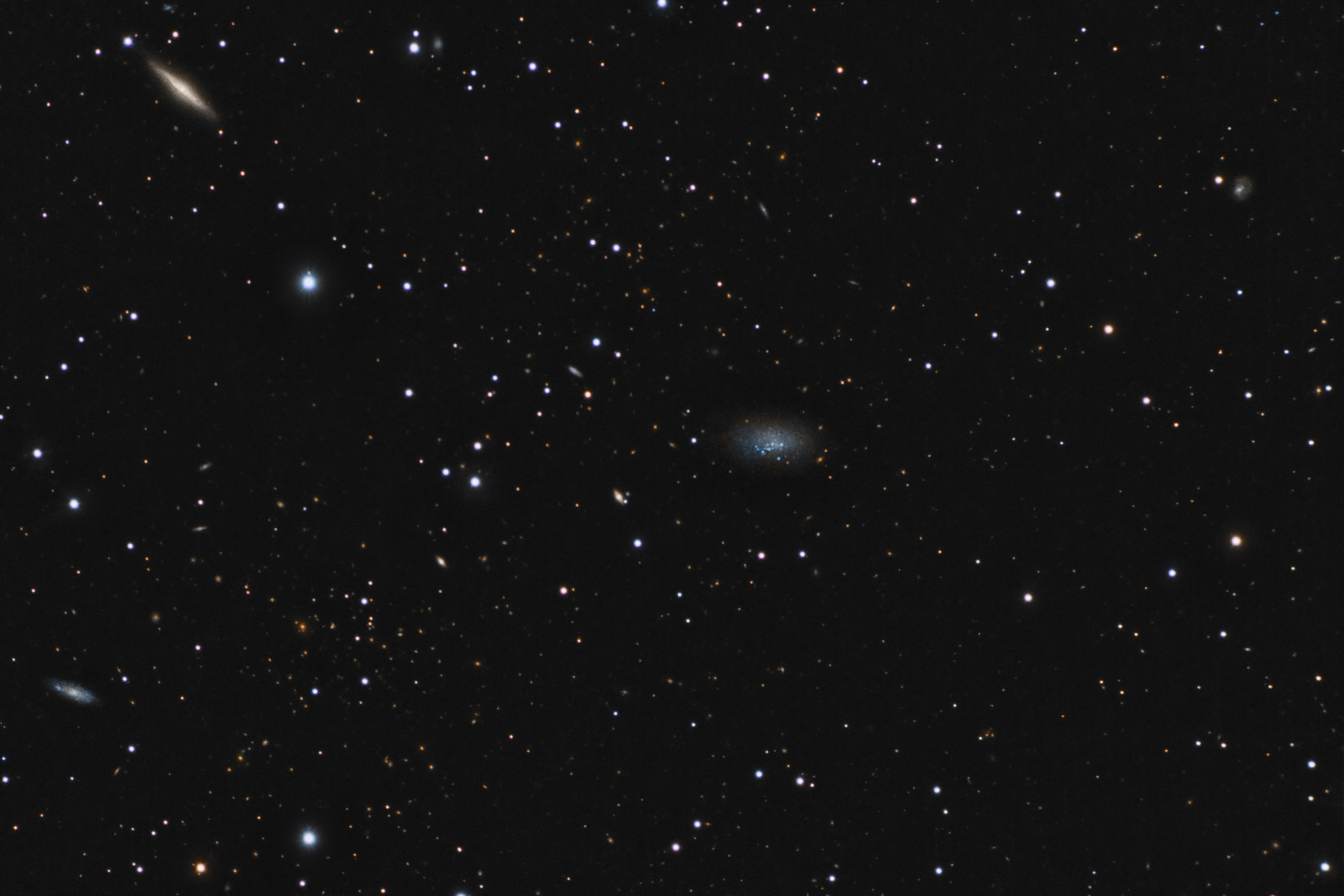 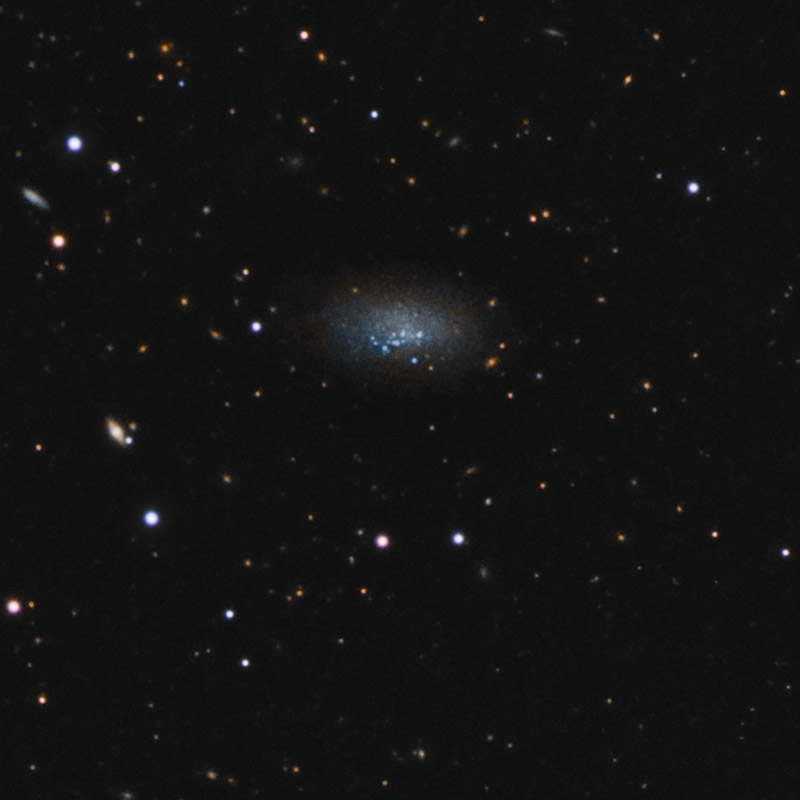 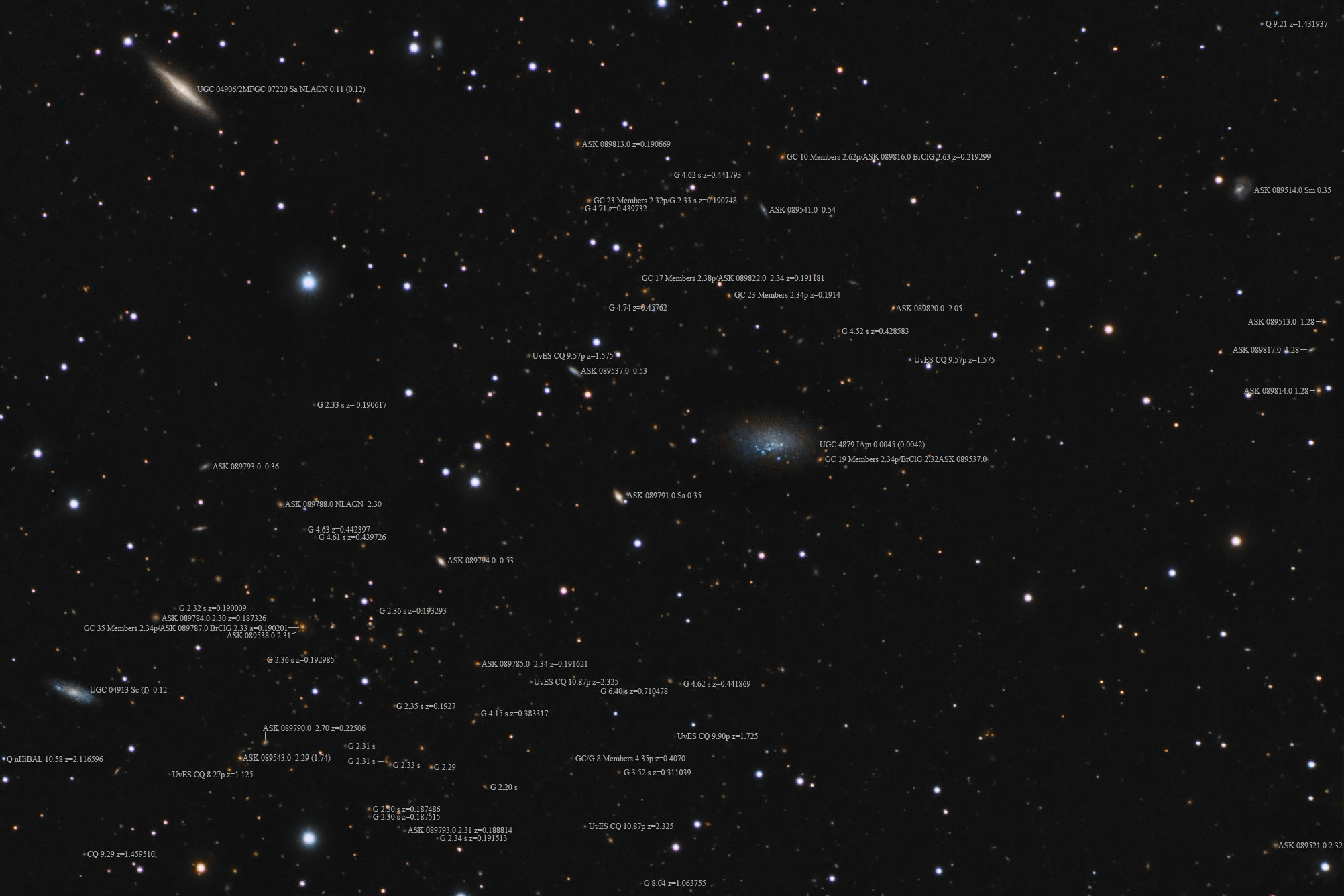