This field is located in Lynx just under the front foot of Ursa Major. The main galaxies are about 370 million light-years distant.

UGC 04892 is a very messed up mess. Most sources consider it a merging pair of galaxies. One was a disk galaxy oriented east to west and rather red in color. The other the blue blob below the bright core of the first galaxy. I was surprised that the condensation to the west (left) wasn\'t mentioned. Is it a third galaxy? It\'s not referenced at NED or SIMBAD. Yet a star cloud in UGC 4919 to the lower right of its core is listed in NED as a separate galaxy. But no mention of the more obvious blob on the right side of UGC 04892. The best paper I found on this object can be found here: https://ir.stonybrook.edu/xmlui/bitstream/handle/11401/69840/ASLv29i3final.pdf?sequence=2

To the north of UGC 4892 is a pair of galaxies listed as one pair in some catalogs. I\'ve used the MCG designations which consider them separately. The southwestern one has a bright companion, SDSS J091646.54+454845.1. I find no redshift value for it. Most likely they are related though maybe not interacting. The northwestern member is a strange spiral with one obvious arm. Is this odd arm the result of interaction with the other galaxy or galaxies? Also, NED indicates the condensation in the southeastern galaxy to the upper left of the core is a separate galaxy. As the galaxy has several blue condensations to the southwest I assume this one is also just a star cloud in the galaxy.

The obvious galaxy to the east (left) of this pair, hiding behind a bright star is KIG 0314:[VOV207]50. That\'s the only designation NED has for it. It is in the extended PGC as PGC 2270647 according to other sources. I found no redshift data for this galaxy.

To the lower left is The nice face on spiral UGC 04919. All of these with redshift values are all at 370 million light-years so part of a group. A couple of others at this distance can be found further east in the image as well. A galaxy cluster at about 3.7 billion light-years is in the lower center of the image. Many other very distant galaxies can be found throughout the image, one beyond 6 billion light-years. Some NED lists as being in the Alhambra catalog. That stands for the Advance Large Homogeneous Area Medium Band Redshift Astronomical (survey). Or else an ancient Arabic fortress turned Ferdinand and Isabella\'s castle when Columbus came calling for funds. I suppose some Spanish astronomer stayed up nights working on this name.

While my nights have been awful for months this was one of the very good nights of the year. While the temperature was near -40C the often present ice crystals in the air were absent so the sky was darker than normal when we have such temperatures. Unfortunately, I had a bright, nearly full moon illuminating a snow-covered lake until about 3 a.m. I couldn\'t start until the moon was nearly down. This was taken just before dawn began. Very frustrating when the night is so good to have to wait for the moon to set. 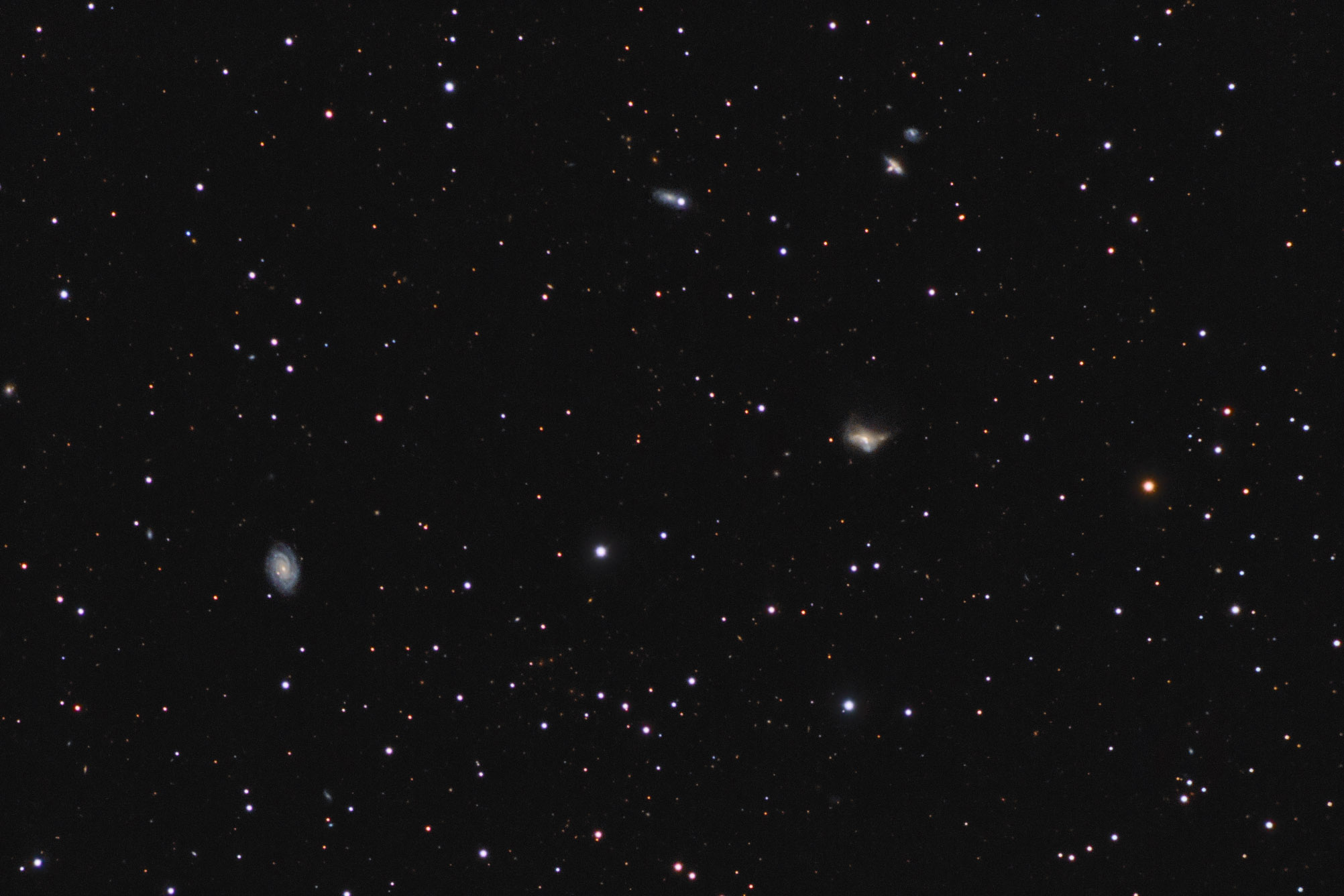 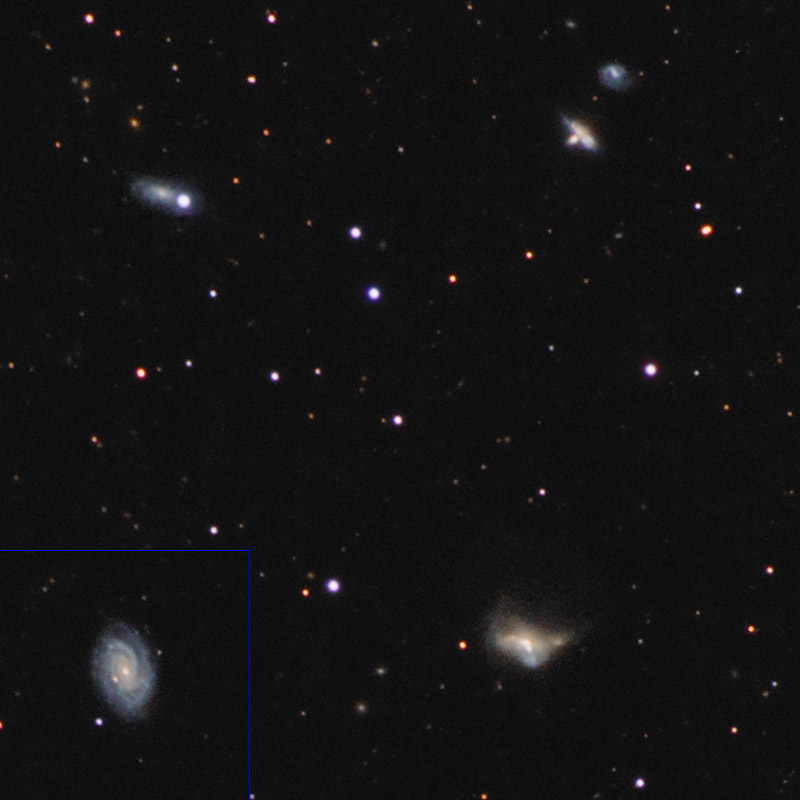 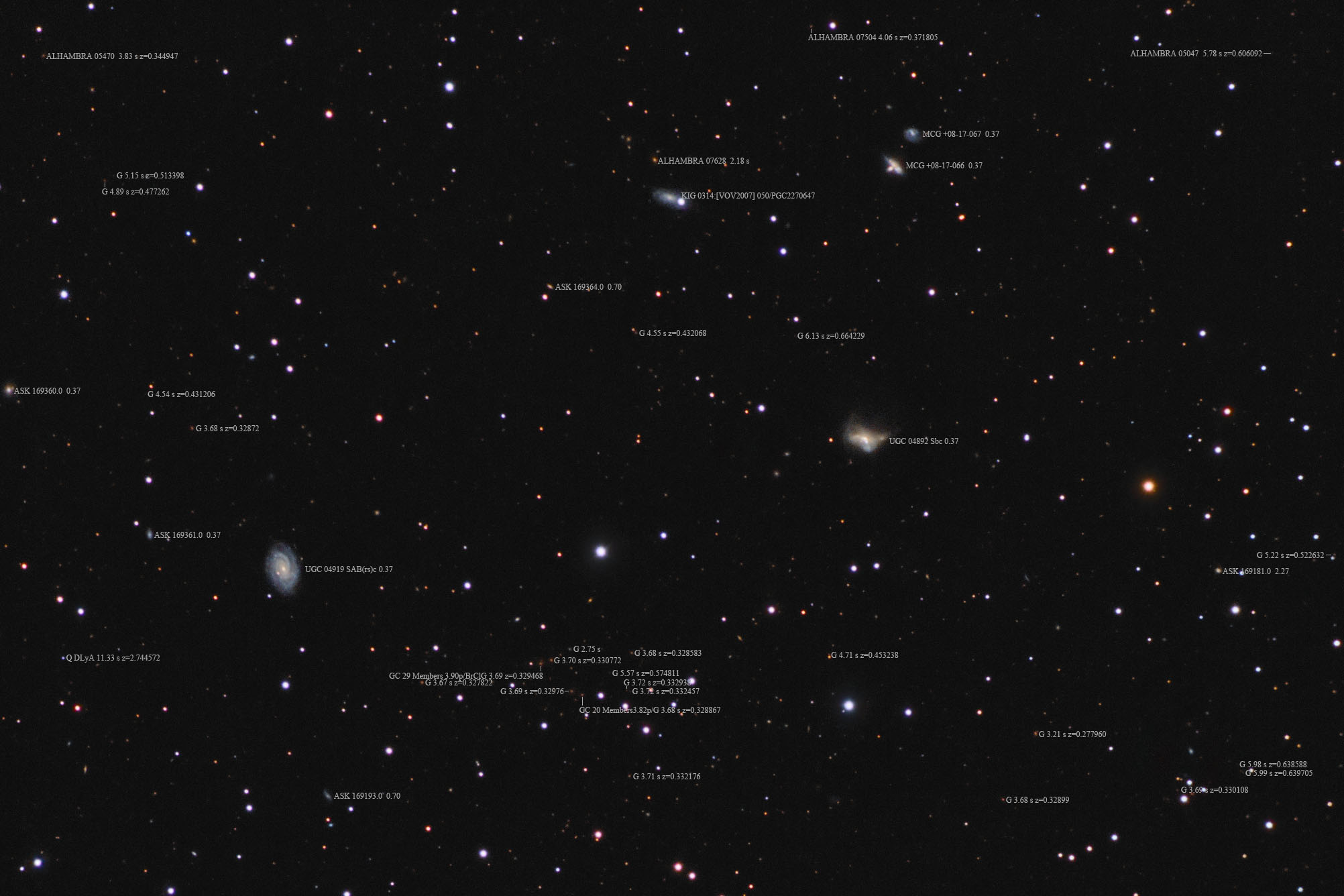