On November 3, 2010 SN 2010jl was seen in UGC 5189a. I imaged it on the 11th low in the east. Dawn came too fast and I missed getting any blue data but decided to process it anyway creating a pseudo blue out of the red and green data. It looked reasonably correct but all I saw were mono images. I had no idea how well it worked. Later I saw Adam Block\'s image of it that showed I got the colors surprisingly right. Replacing a missing green is rather easy but replacing blue with nothing further up the energy spectrum is more difficult. This was done nearly 8 years ago. I\'m not sure I remember how I did it.

On February 19, 2012 I decided to shoot it again to get a better image of the galaxy. This one is a Jinx. Looking at the data when I processed it a few days ago I was shocked to see clouds had made a mess of it. Two of the luminance frames were nearly totally lost to clouds and the color frames were similarly hurt severely, especially the red which had nasty halos around brighter stars enlarging them greatly. I was about to can the whole thing when I noticed the supernova was still there even though 15 months had passed. The data is mostly weak which prevented me from getting much detail though seeing was excellent. The brighter parts of the galaxy where the SN are located were the only parts to come through with a significant signal to allow me to eke out any more detail than my earlier shot. Color is likely even worse than the first try though all three channels used real data this time. Now that the supernova has faded the red color of hydrogen alpha is obvious. This may be hydrogen the star blew off before the explosion now being hit by the shockwave of the supernova. My severe underexposure makes it difficult to compare to the 2010 image.

Since a shock wave could still be exciting hydrogen ejected prior to the supernova, I revisited it again on January 8, 2013, nearly a year later. The hydrogen emission is still visible. Much like the shell from supernova 1987A in the Large Magellanic cloud is still visible even today. I seem to have forgotten this one since the 2013 image. I need to revisit it.

I\'ve included a full frame image from 2010 at 1\" per pixel. As well as an annotated image from that date. I have then included a cropped image at 0.67\" per pixel from 2010, 2012 and 2013 and a Hubble image with the location of the supernova circled. It was taken before it exploded. Since then Chandra agrees with my idea that this is a shell lit by a shockwave including lots of X-rays. SN 1987A didn\'t have the strong X-Ray emission, at least it couldn\'t penetrate the shell-like happened with 2010jl. You can read about it and the supernova itself at http://chandra.harvard.edu/photo/2012/sn2010/

I\'ll cover the very strange galaxy UGC 1589, the north end where the supernova blew is separately cataloged as UGC 1589A. UGC 5189 is a major train wreck of a galaxy in southwest Leo. Redshift puts it about 160 million light-years away. The upper part where SN 2010jl is located carries a separate designation of UGC 5189a. The UGC says of it: \"Chaotic arc-shaped object, brightest in north-preceding part Probably chain of disrupted galaxies.\" The VV catalog confuses me with its description: \"Very faint spiral(?) with a stellar nucleus and a bright extended arm to the northwest.\" OK, I agree the northwest part is by far brightest part. Is it calling the very blue star knot southeast of the \"center\" the stellar nucleus? A blue nucleus is extremely rare as they are normally made of old, red, population II stars. NED indicates the whole system might be classed as Im for an irregular of the Magellanic type. UGC 5189a as an Irregular system while the lower part is noted to be a Wolf Rayet galaxy, that is one in which Wolf Rayet stars dominate the spectrum. These are high mass stars near a violent death such as SN 2010jl experienced.

A slightly separated piece at the far southeast end carries a separate SDSS label and is listed as being a separate galaxy though it looks like it could be part of UGC 5189. To the southwest of UGC 5189 is a very distorted smudge of a blue galaxy also listed only the Sloan Survey. It has virtually the same redshift as UGC 5189 and its parts. Has it interacted with UGC 5189? I have no idea. NED has little on it but for the redshift. Well above UGC 5189 is a super faint smudge hiding behind a 17th magnitude star. It is AGC 198337. For such a faint smudge it is surprisingly the closest galaxy in the entire image at a redshift distance of only 82 million light-years. It has no classification at NED but it must be a very low surface brightness galaxy.

While all images were taken using 4 10 minute images for luminance and 2 for each color. The 2010 image had no usable blue so that has been reconstructed. The others were all hit by clouds so aren\'t at all comparable. But the supernova is likely rather comparable. 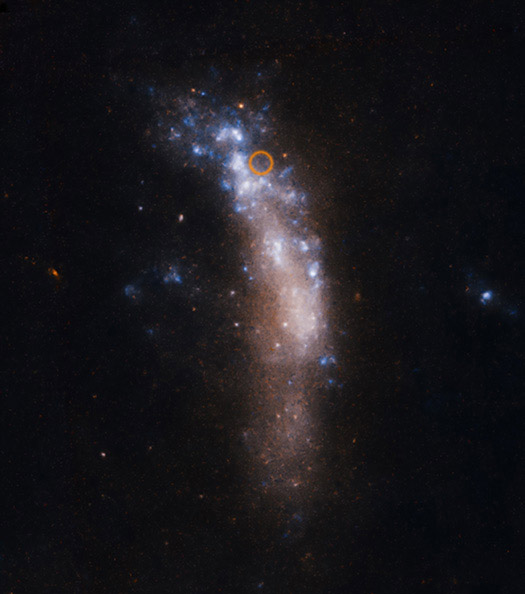 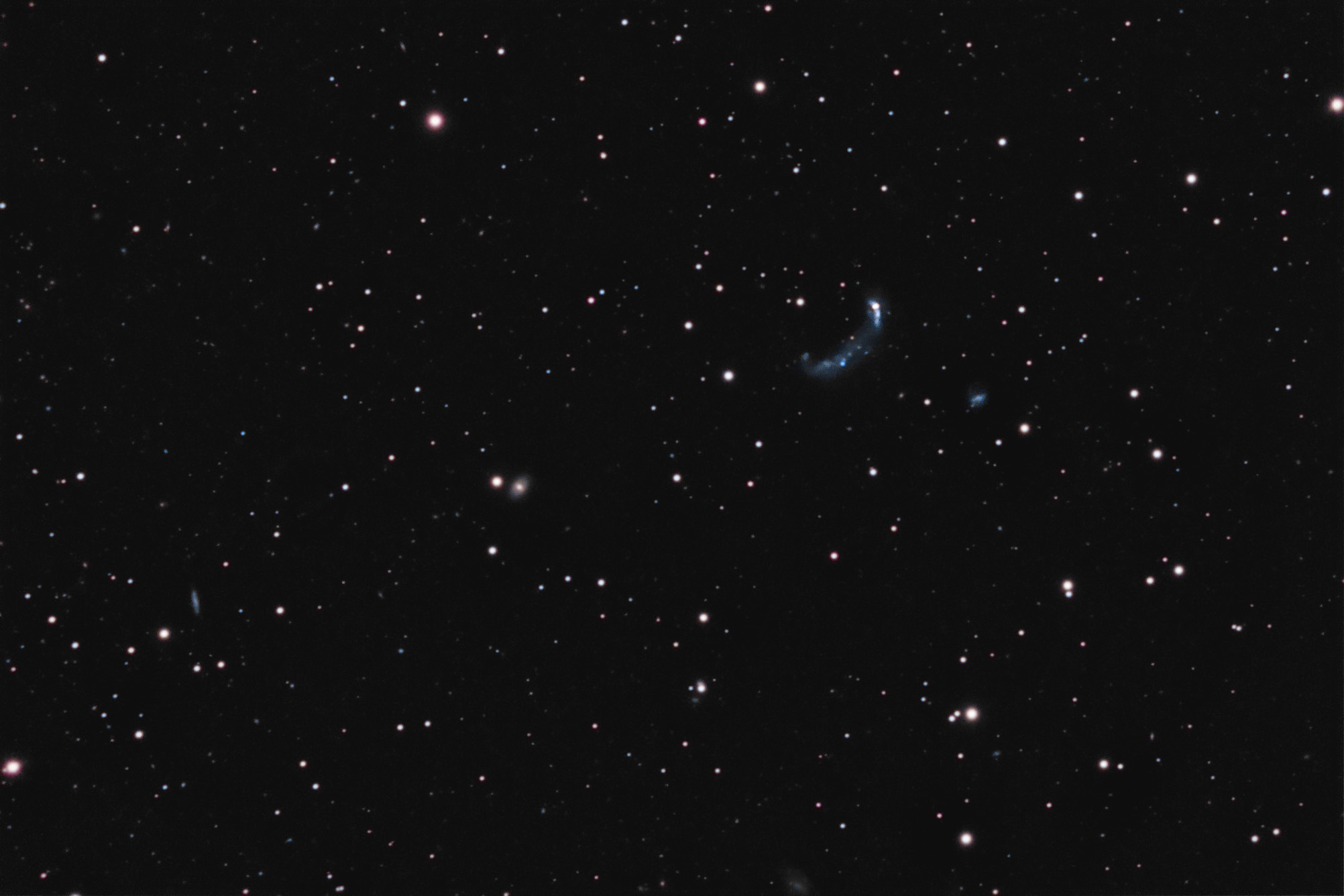 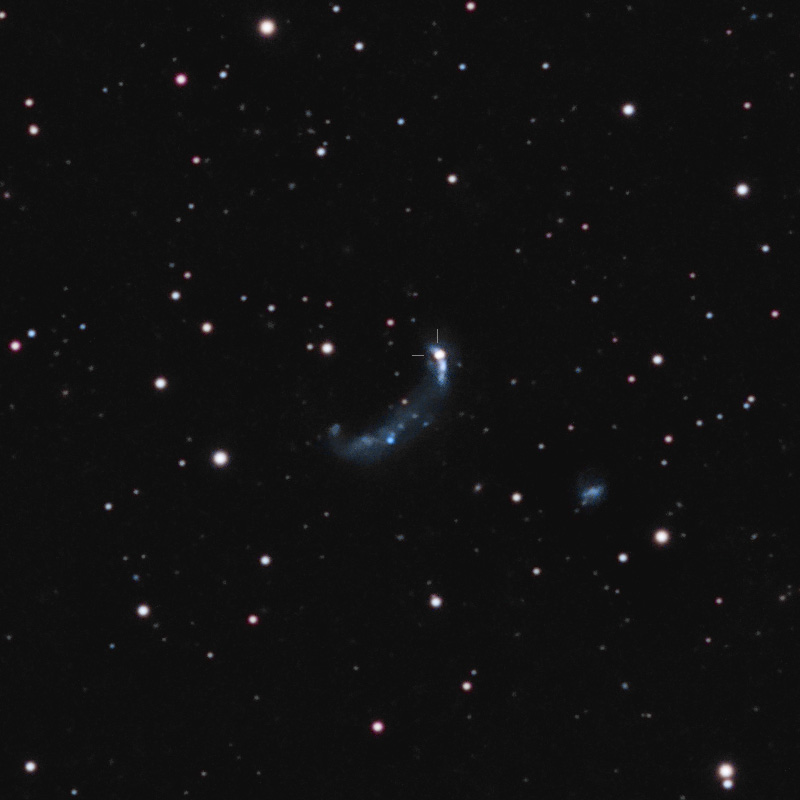 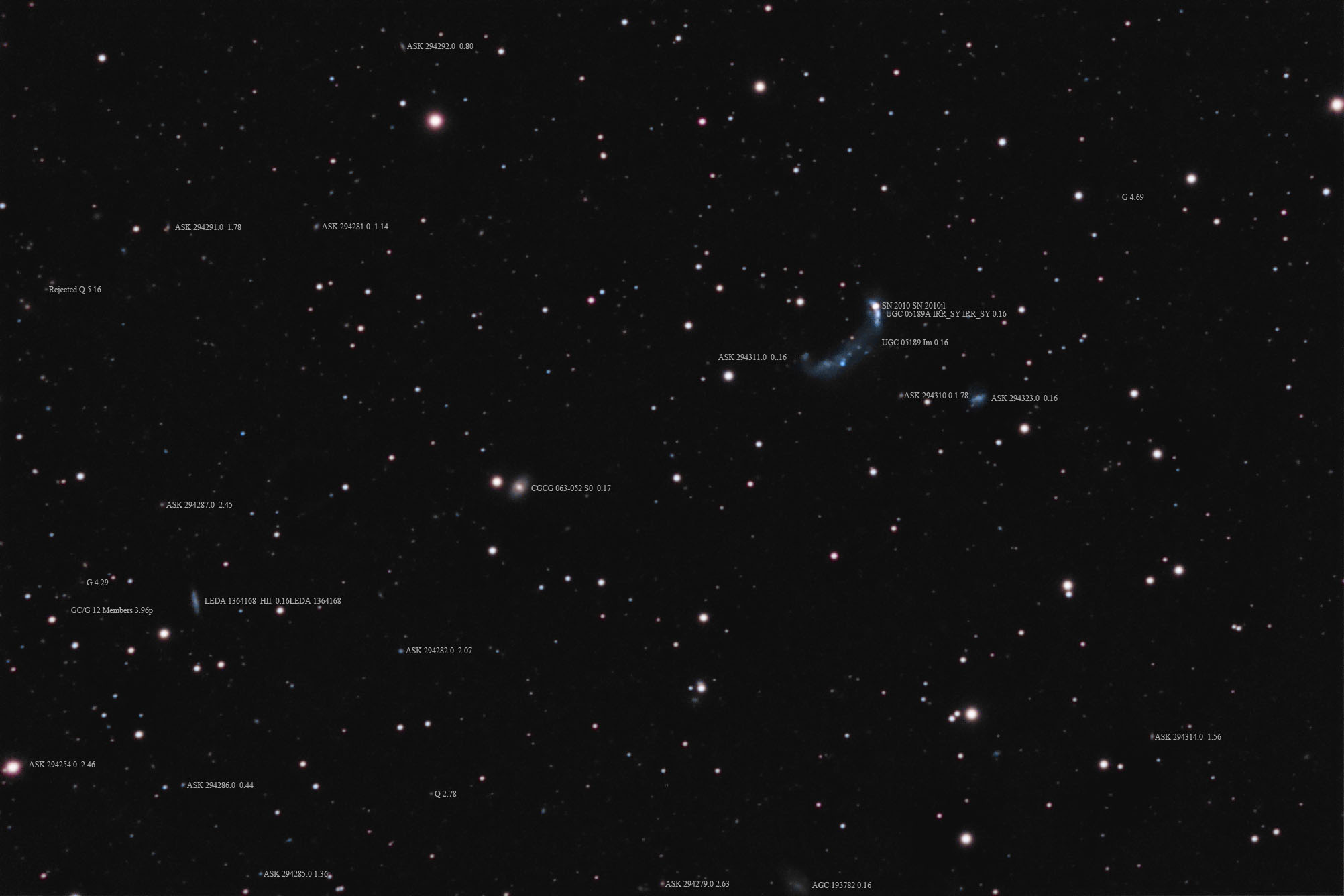 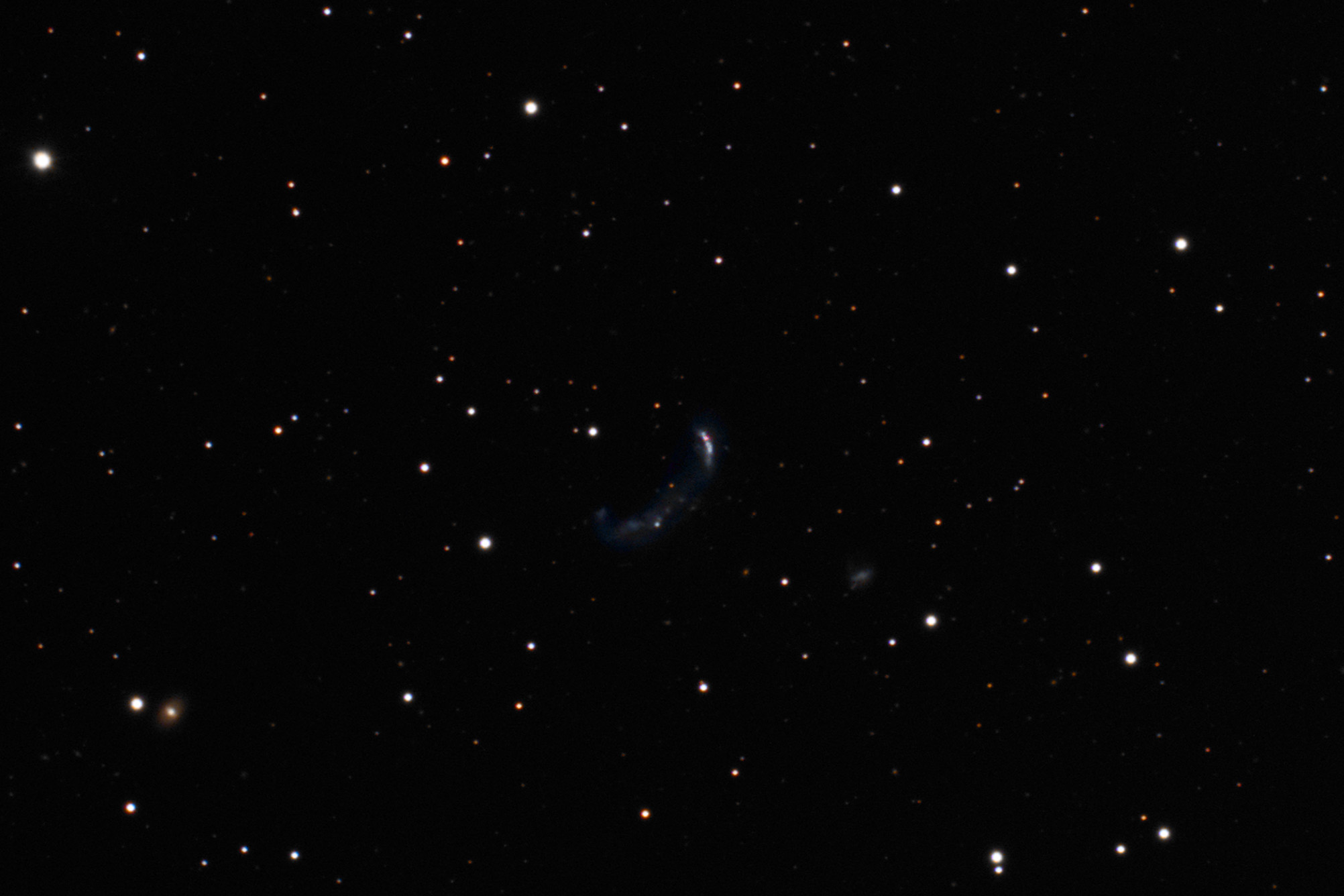 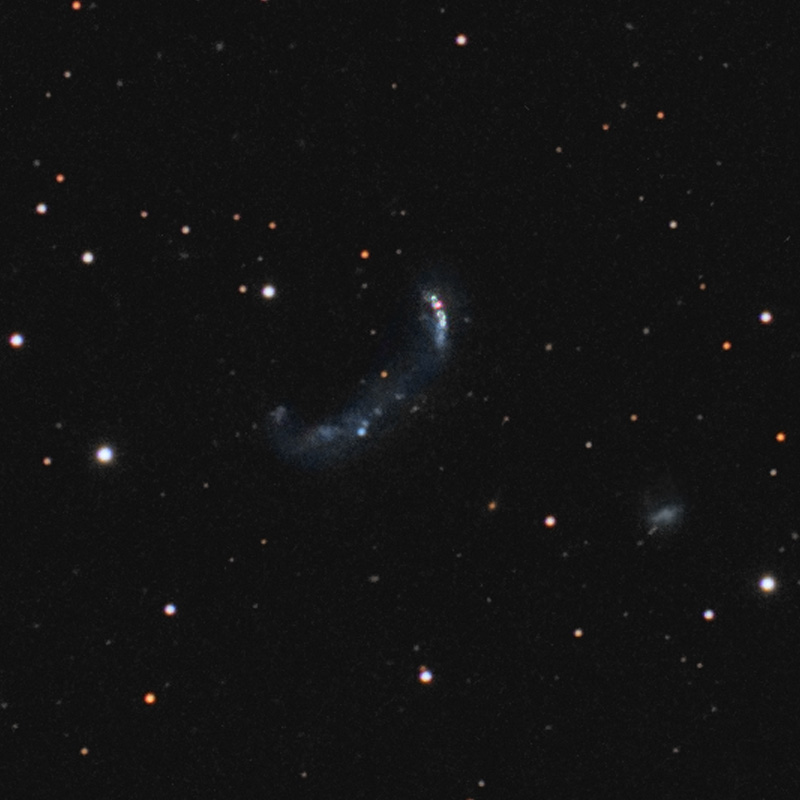