UGC 5600 is a very strange, possibly polar ring galaxy in northern Draco about 130 million light-years distant. It is classed as S0? by NED and is surrounded by a faint ring. It also has a faint red linear feature going east and west through its inner region that doesn\'t reach the faint outer blue ring. I think this feature isn\'t real but an artifact of my limited resolution blending in foreground stars. There are two main papers on this one and they don\'t agree. One says \"This galaxy shows optical emission in a large, diffuse face-on outer ring as well as in the inner, narrow, and apparently edge-on ring that is perpendicular to the position angle of the central object.\" That fits my description of the faint outer ring and the linear red feature. But a later paper says: \"This system appears morphologically complex; it is interacting with a close companion (UGC 5609) of similar size that lies only 1 arcmin (~14 kpc) away. Two other companions of similar redshift are also nearby. Because of the interaction, it does not have a typical polar-ring morphology. A thin extension, perhaps an edge-on inner ring, appears in the north-south direction, while an outer ring, with the same orientation but rounder (maybe less inclined with respect to the sky) surrounds the galaxy.\" This says the two features are both oriented north-south. I see no such edge-on inner ring\". Nor do I see it in the SLOAN image. But then I don\'t see the east-west feature either! I\'m confused.

While both papers refer to UGC 5909 the later paper says there are two other nearby galaxies with the same redshift as the UGC pair. The second says there are none at NED which agrees with my check of NED. So what are these two? One may be the galaxy to the northeast which is VII Zw 323. A note for it says: \"Probably associated with two blue post-eruptive spirals...\" then names the two UGC galaxies using a different catalog designation. But I\'m lost as to a 4th. There\'s only one other galaxy with redshift data at NED and that is CGCG 350-047 but it is 380 million light-years distant, three times further away. Look for it in the lower right corner by a fairly bright orange star.

Oddly I find little on UGC 5609. It is a ring galaxy with the core pushed to one side of the ring. This is almost always, maybe always, caused by a dead-on collision of a spiral with a dense small galaxy. The effect is to push the spiral\'s core to the side of a ring this creates. But the only mention of this I find is one that just says this galaxy has an eccentric nucleus and nothing further. So where is the galaxy that caused this mayhem? It seems nowhere to be found unless somehow UGC 5600 did the deed. That might be the case. A third paper says that UGC 5600 is forming a ring due to current accretion from a companion. Adding that such galaxies are characterized by peculiar velocity fields. It goes on to say: \"The rotation curve along the major axis of the galaxy is very peculiar, with counter-rotation in the central (|r| < 5\") part. Rotation of the suspected ring is more regular: to a first approximation, the observed radial velocities follow a straight line ({sigma} = 17.6 km/s).\" Note it makes no mention of this being a polar ring nor of the second ring the other papers mention. Now my head really hurts.

With not much else on all the galaxies in the field, I didn\'t make an annotated image. While the DR9 SLOAN release does cover this field it is yet to be picked up by NED. Edit: It has since been picked up by NED along with other catalogs. It may now be worth annotating if I had the time, which I don\'t.

Seeing was very poor for this image so it is rather soft. Yet another of many that would benefit from a retake it likely won\'t get. 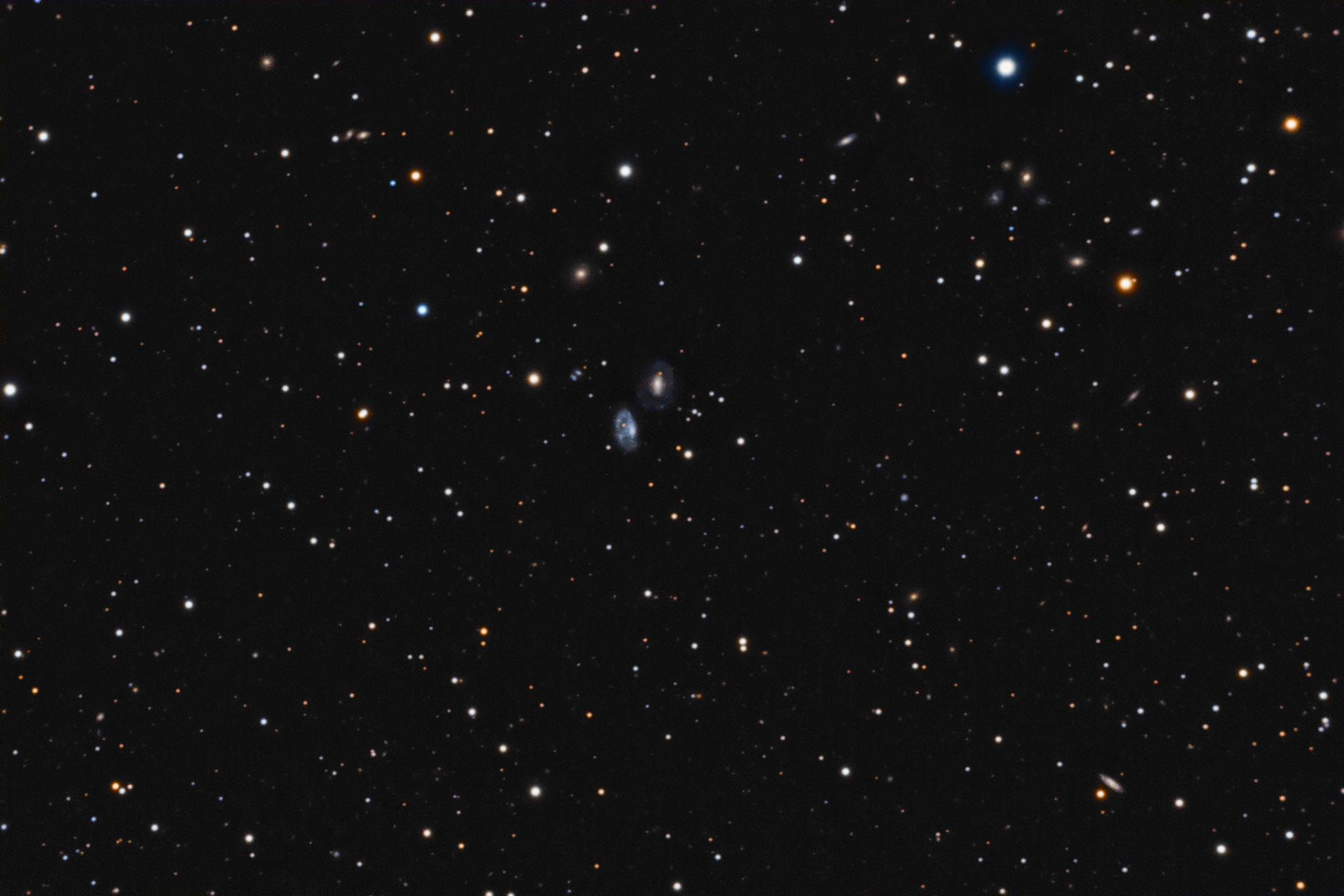