UGC 5676/PGC 30871 is a very strange galaxy in Ursa Major just off the southwest corner of the bowl of the Big Dipper asterism. NED gives it the classification of SBdm:. I see a slight hint of a spiral structure but can\'t begin to classify it. But then most Magellanic spirals like the Magellanic Clouds are too distorted for my brain to see the spiral structure. Its blue color indicates it has had strong star formation in the recent past but not quite enough to rank it in the starburst class. Redshift puts it about 73 million light-years from us so it is rather nearby compared to most galaxies I image. But it is quite small in angular size. It appears to be no more than 30,000 light years across including the edges of the plumes it seems to have. That would make it about the same size as the Large Magellanic Cloud.

It may be related to Arp 233 I posted back on January 16, 2011. In that post, I mentioned that this galaxy may be the cause of Arp 233\'s starburst activity. I found one paper indicating this possibility. If I put UGC 5676 in the upper right corner I could just fit Arp 233 in the lower left corner but since the corners of my frames have a bit lower resolution than the rest of the frame due to severe vignetting reducing the signal there and some curvature of the field I decided against it. Nor did I frame Arp 233 so I could mosaic the two frames. Redshift puts Arp 233 at 71 million light-years, almost the same as UGC 5676. It, however, is a very compact galaxy of high density. Using a distance of 71 million light-years the separation of these two is less than 800,000 light-years. They could have easily been close enough to interact less than a billion years ago. The denser Arp 233 could easily create the mess that is now UGC 5676 and they could have triggered star formation in each other that we see still going on today. Then it\'s also possible they never did interact and they are both the way they are from other causes. I thought UGC 5676 sufficiently strange to make my Arp-like listing.

Again, weather nailed me. Being faint and not certain if it had far-flung plumes I took 9 luminance frames and 5 for each color but had to throw out 4 luminance and two of each color due to bad seeing, clouds and an ice fisherman with a multi-million candlepower light that swamped the scope when he decided to use it to study what the heck that strange building on the hill was. That happens several times each winter. Happens with boaters in summer as well. Each seems to try and have a more powerful light than the other guy. Why there\'s this competition beyond reason I can\'t fathom. 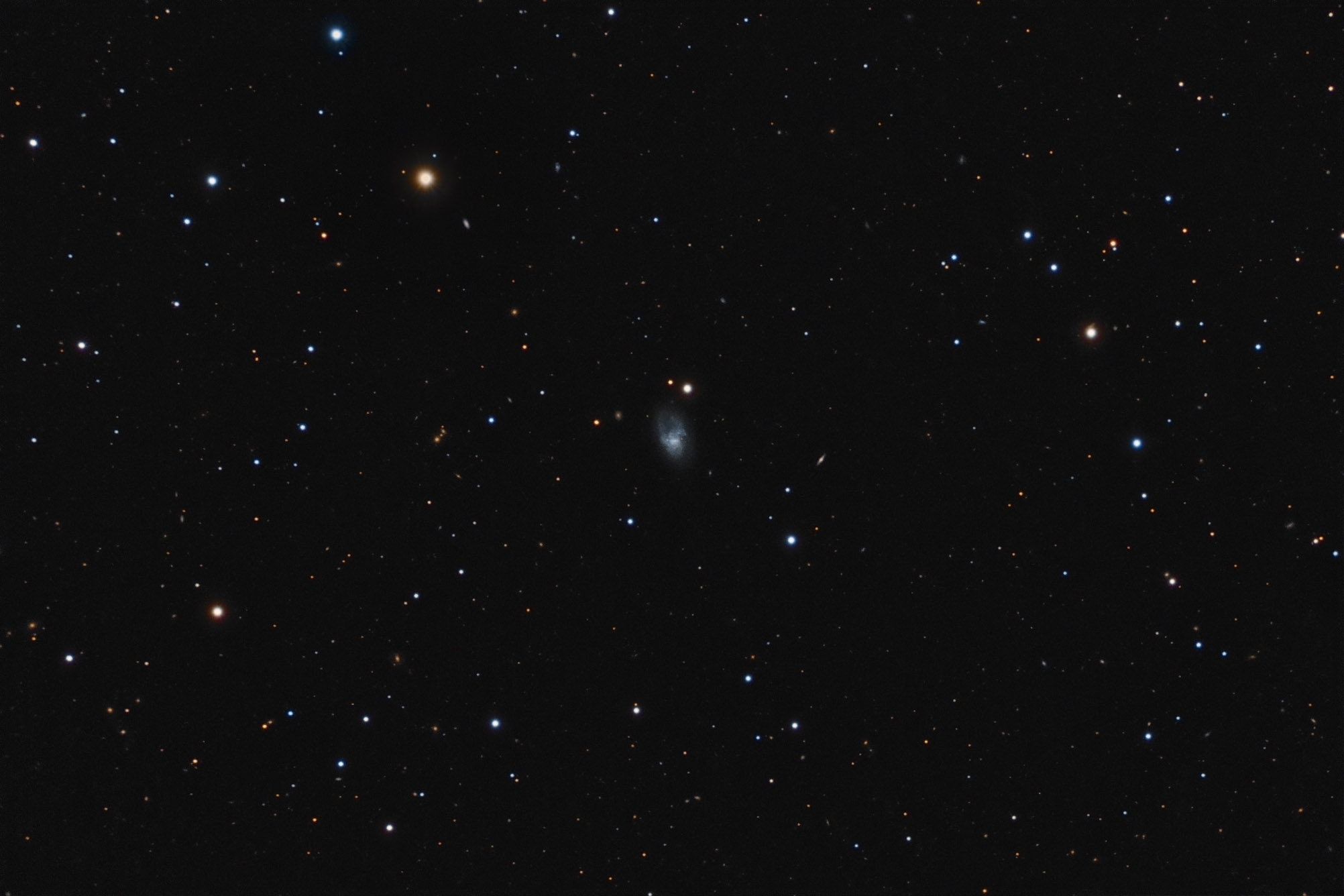 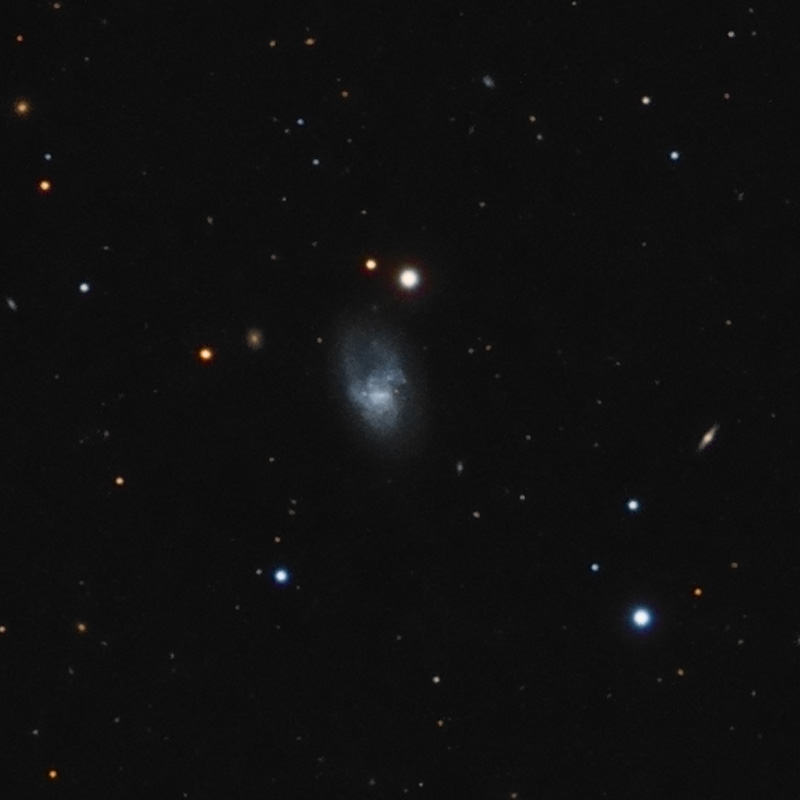 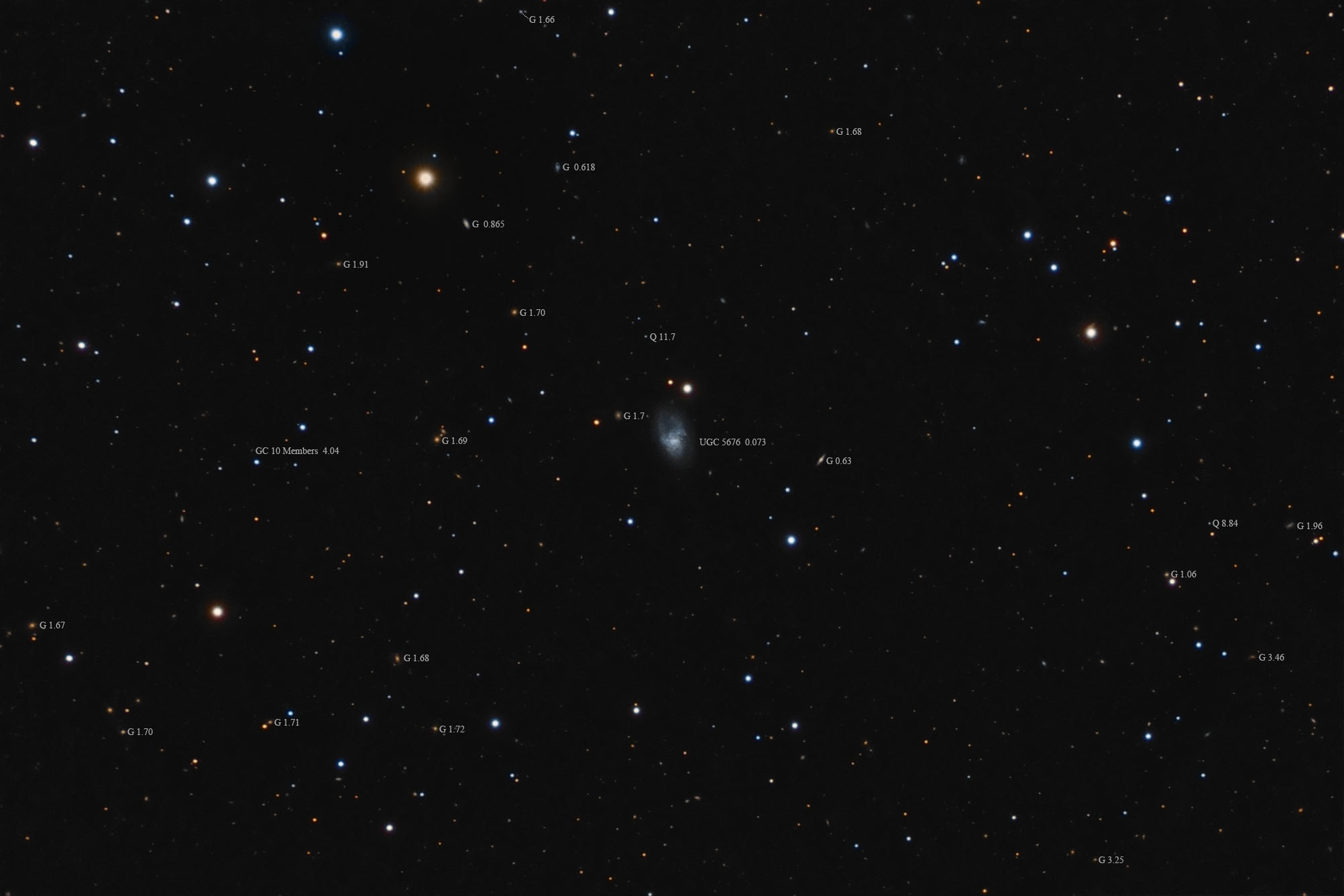