A galaxy with a handle?

As is obvious by now, I like strange galaxies. UGC 6334 certainly is a strange galaxy. The bright portion looks rather normal just with no outer arms you\'d expect in a spiral. Instead, it has a ring that is very off-center from the main part of the galaxy. Is it a polar ring? I found nothing saying it was. One paper just says it has an eccentric nucleus. The galaxy is 300 million light-years distant in the constellation of Ursa Major under the back foot of the bear. It is huge with a diameter of about 250,000 light-years. Just south of it is LEDA 4274358 a dwarf disk galaxy at about the same distance. It appears normal, just small at 25,000 light-years in size.

To the west-southwest is LEDA 1841313 also at 300 million light-years and it is distorted. The left side looks normal but the right side has been \"cut off\" in that it looks shoved in as if it ran into a wall. Obviously, that didn\'t happen but why the difference? I found nothing on these galaxies.

When a spiral is hit near dead center with a massive dense compact galaxy, often called a \"bullet\" the result is the spiral becomes a ring with the core pushed to one side of the ring. Could UGC 6334 be something hit by too small or not compact enough galaxy to make the classic ring moving the core to the edge of the ring but not smashed against it? If so, was LEDA 1841313 the bullet that didn\'t have what it takes to turn UGC 6334 in to a full ring as say Arp 147? I found nothing about this odd galaxy but that comment that it had an eccentric core.

Another distorted galaxy is near the left edge, LEDA 4546575. It appears to be a distorted low surface brightness galaxy with a drawn out plume on the left side. It is 420 million light-years distant so not related to UGC 6334. Still, I have to wonder how it got messed up.

To its southwest is what NED identifies as a 7 member galaxy cluster. I point to the bright cluster galaxy at its heart in the annotated image. Which other galaxies in the area are members of the cluster I don\'t know. Its photometric redshift (not as accurate as spectroscopic redshift) puts the cluster at 3.8 billion light-years. NED had no distance estimate for the galaxy the annotated image points to.

One lone asteroid put in an appearance. At magnitude 20.3 and under my low transparency skies it is pretty faint. Details are on the annotated image. 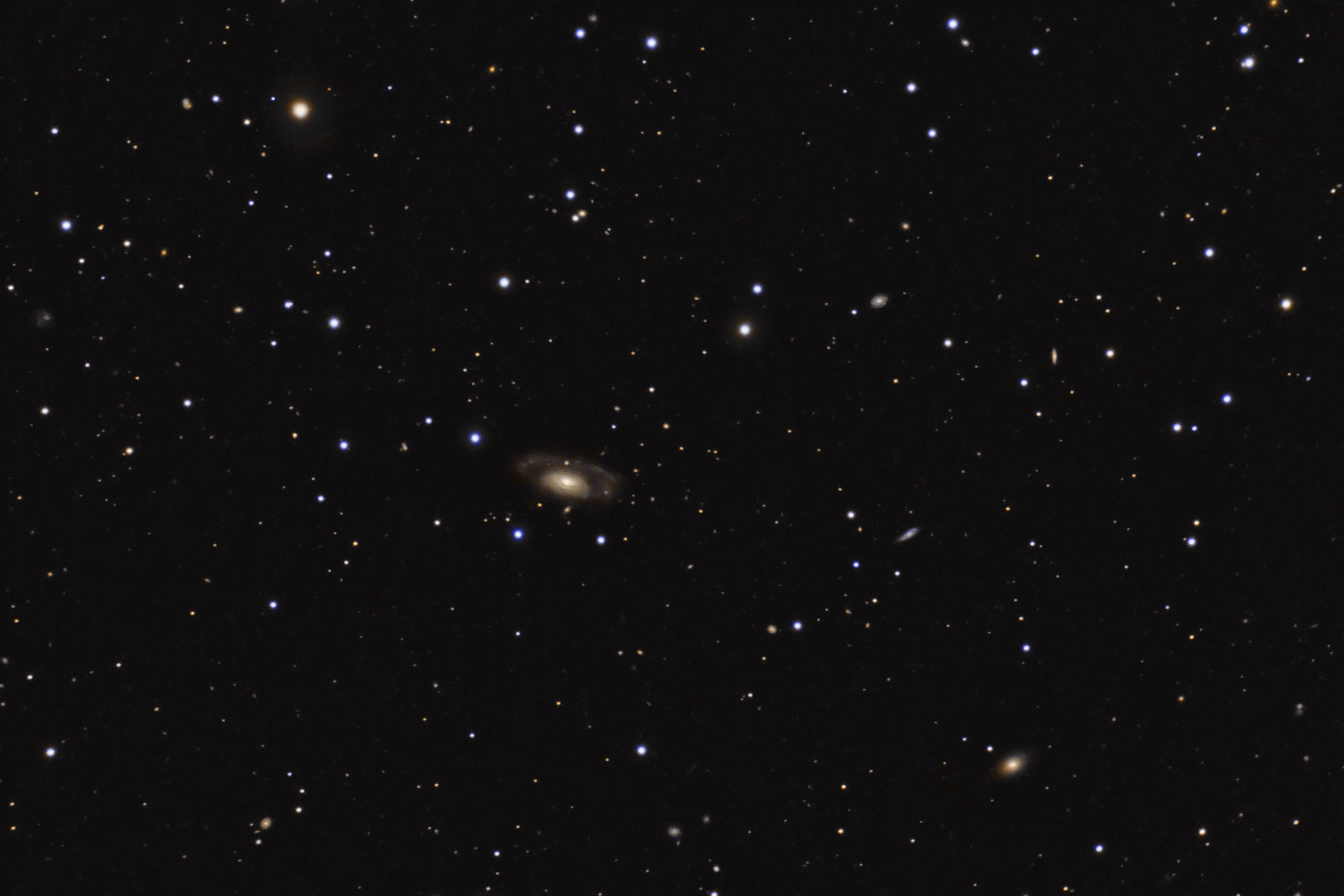 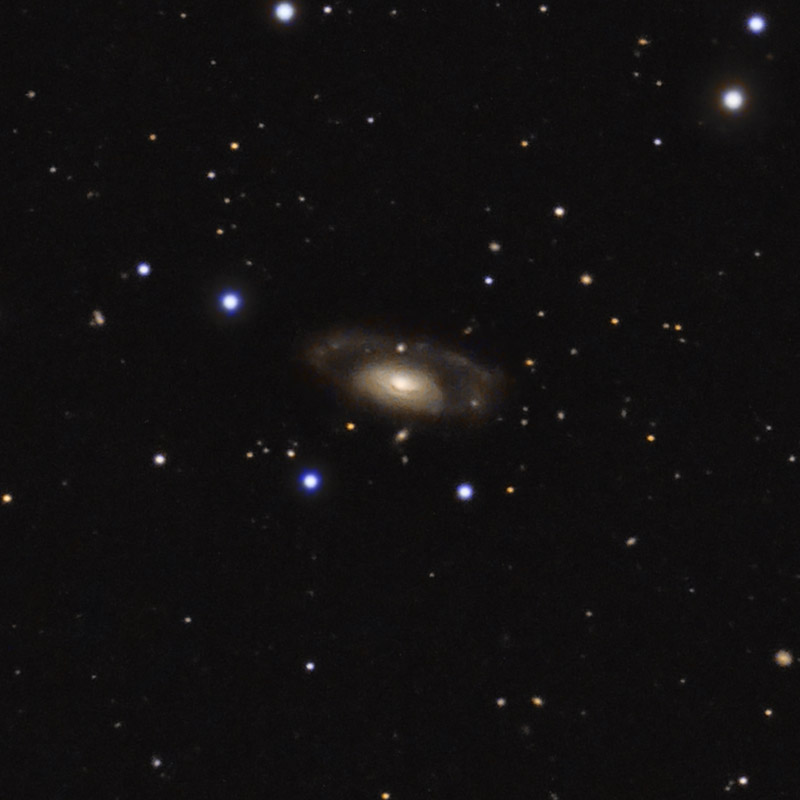 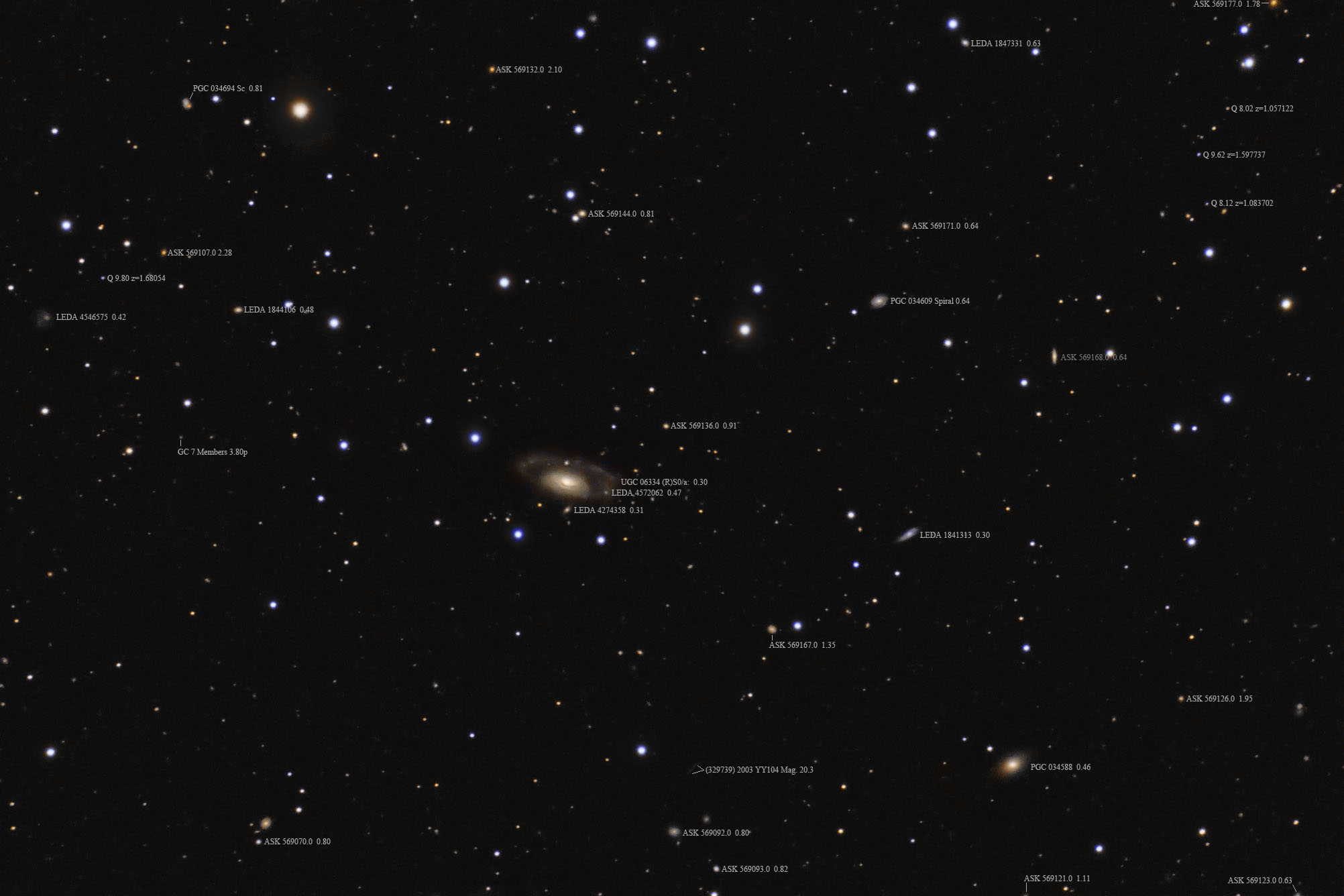