UGC 08496 is an interacting double galaxy in Canes Venatici 4 degrees northeast of M3 about 230 million light-years distant. The southern galaxy is compact S0 galaxy while the northern one isn\'t classed at NED nor the UGC that I could find. It appears to be the remains of a spiral while the southern looks like the stripped core of what used to be a spiral. Once fully merged it will likely be an elliptical galaxy.

UGC 08492, the very golden round galaxy is classed by NED as S?. Looks more like an elliptical. It is another hundred million light-years beyond UGC 08496 so unrelated to that group.

The other \"pair\" of galaxies is VV 326/UGC 08502 at 0.47 million light-years. To me, it is a triple galaxy with VV326a being made up of two galaxies. NED doesn\'t see it that way, however. They indicate the southern rather obvious spiral is the location of the galaxy. It is quite red in color. Above it is a very blue knot which NED calls \"Part of VV 326a\". When referencing the 2MASS survey entry for VV 326a they state: \"2MASS position is for the northern knot.\" That would indicate the \"knot\" is undergoing strong star formation while the red color of the lower \"part\" doesn\'t seem to have much as it didn\'t make the 2MASS survey. To me, they are two separate interacting galaxies. They may be in the process of merging as their common redshift would indicate or their motion is mostly transverse which can\'t be seen by redshift. Or NED is right and they are part of one galaxy. I suppose the northern \"knot\" could be a knot in the highly distorted northern arm. Seems a super knot if it is. In fact, it is far brighter than the Sloan image or POSS plates would seem to show it. At first, I thought it might be I caught a supernova but I don\'t find any listed at that position at David Bishop\'s supernova pages for 2010 or 2011. The image was taken April 24, 2011. As a check, I took a quick frame of it this year and it is still just as bright so definitely not a supernova. I can\'t explain why it is so bright compared to the other images.

The galaxy cluster MaxBCG J202.37294+31.32918, due west of UGC 08496 is a puzzle. I\'ve marked the positions of both with two lines for the one entry for the Big Cluster Galaxy and the cluster\'s different position. Note the name of the cluster gives its position in degrees epoch 2000. That is exactly where the BCG is located rather than the position given for the cluster, if you ignore its name. The galaxy\'s distance is by spectroscopic measurement while the cluster\'s distance is photographic. Trust the former to be more accurate. The cluster is also known as ZwCl 1327.1+3134 and that too contains its location however only to the nearest minute of arc in declination and 1.3 arc minutes in right ascension. Too imprecise to help here. (.1 minutes of RA at 31 degrees is about 1.3 arc minutes --multiply 0.1 by 15 x cos(31 degrees)). 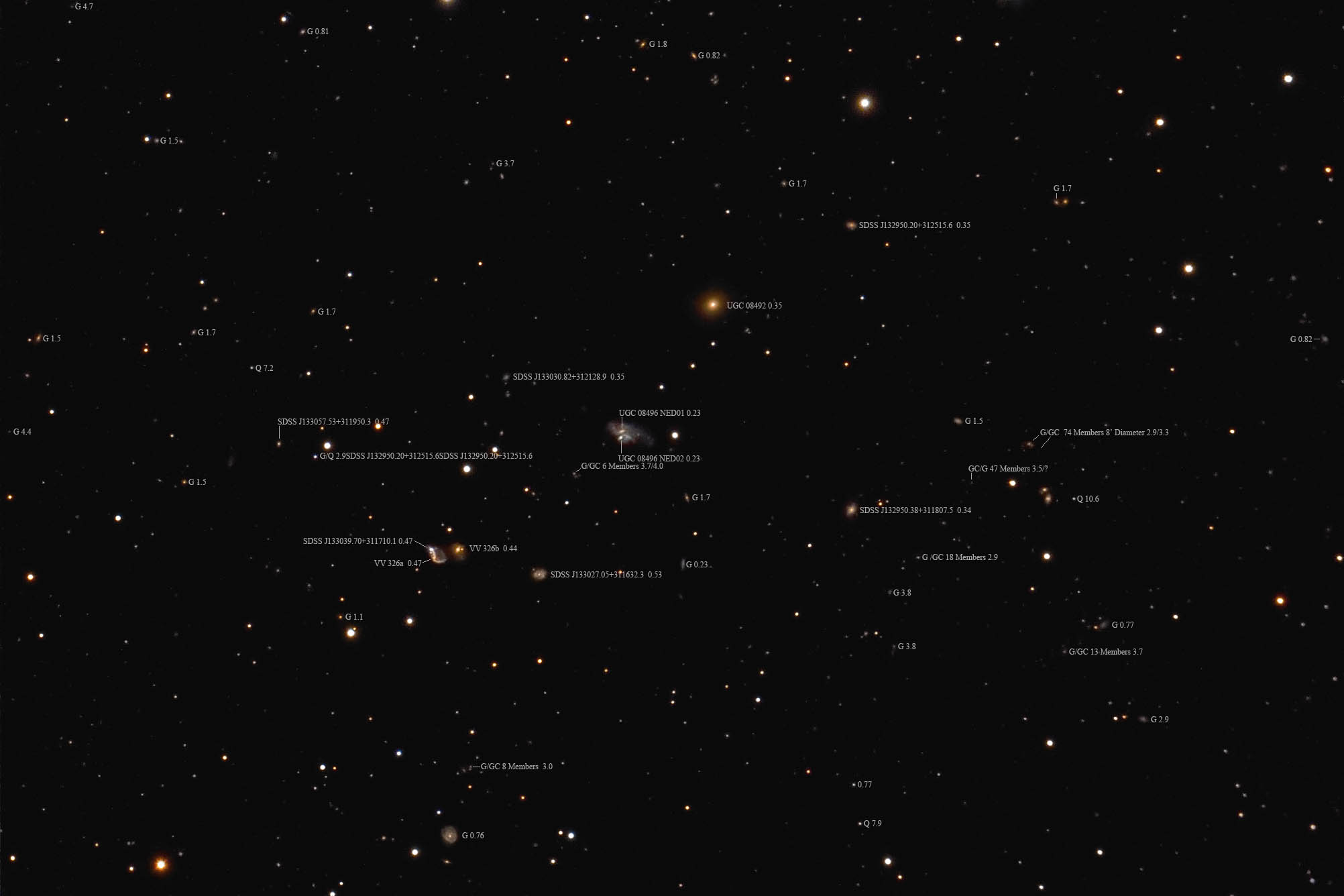 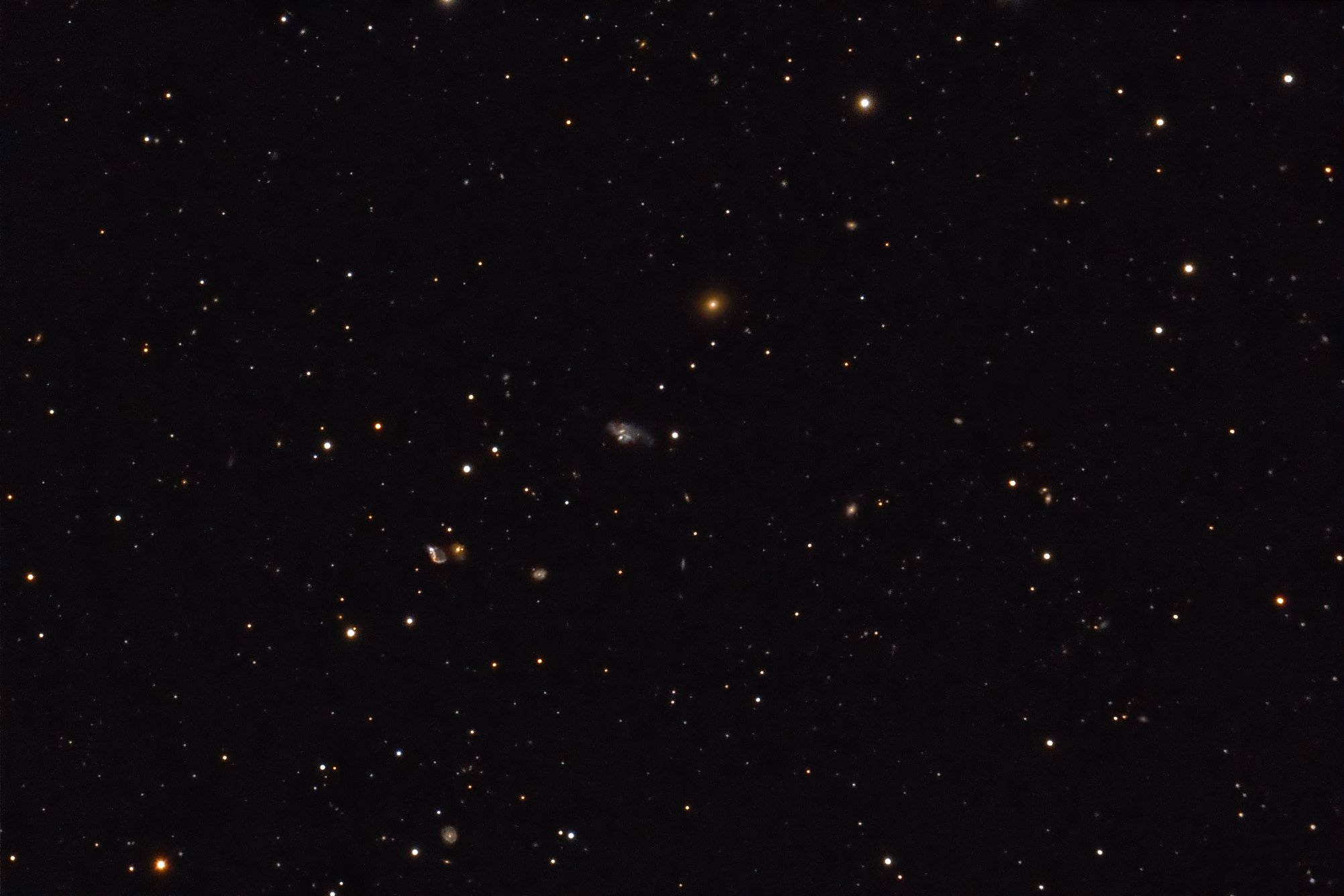 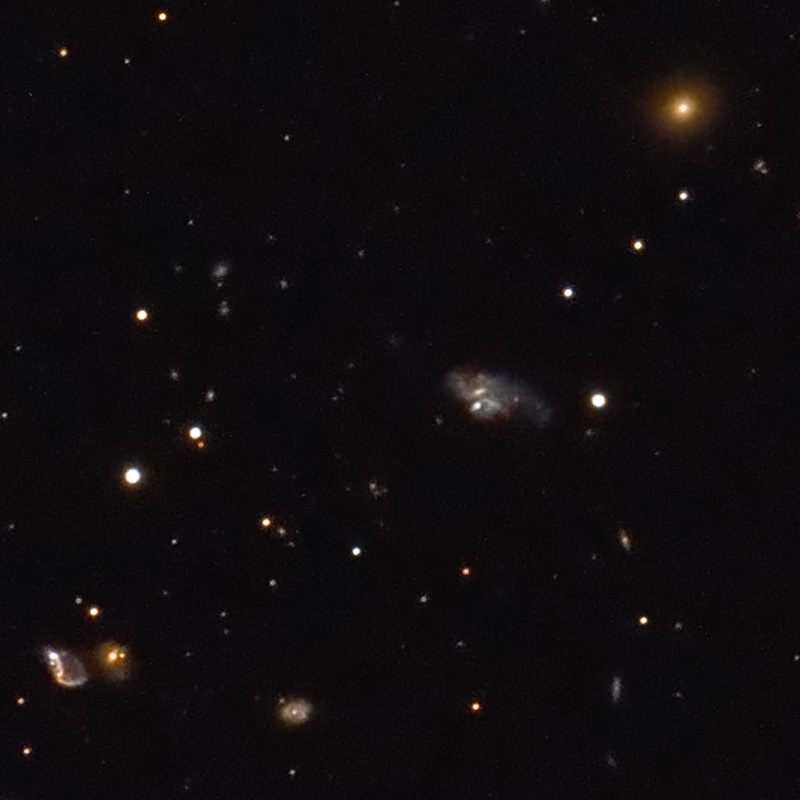