The only striking feature of the galaxy is its extreme blue color. I abhor processing the color of an object in my image differently than others. If a galaxy seems to be too red, too blue has little color difference between the core and spiral arms etc., I leave it that way rather than push its color to fit the \"norm\". In this case, I made an exception. When I processed it the same as the rest of the field the blue was neon blue, even indigo, to the extreme. I selected the galaxy and reduced the color saturation by one half! It is still bluer than most any galaxy I\'ve imaged but toning it down further would just be too much for my image processing philosophy. I don\'t like the reduction I made but it looked just horribly blue/indigo until I did. Oddly I find nothing in what few words have been written on this galaxy that mentions this extreme blue color. Otherwise, it is a rather featureless blob with a hint of some structure at the southwest end which seems a bit less blue than most of the galaxy. I would think the blue color indicates massive star formation recently that completely overwhelms the old stars that used to define the galaxy. I doubt it has any significant amount of dust and gas left for future star formation. What triggered this star formation appears to be unknown. It doesn\'t appear due to interaction with another galaxy as it isn\'t at all distorted for its type of galaxy nor is any other galaxy nearby (within 2 degrees) that is even close to this distance from us. It is a pretty lonely little galaxy. Is it just sad (blue) from being so lonely?

There are two pairs of obviously interacting galaxies to the northwest and southeast of UGC 9128. Both show plumes from interaction. Redshift is available for only one member of each pair but it appears obvious they are at the same distance and interacting.

Another reason for catching this field is that it has a galaxy from the Flat Galaxy Catalog, #1737 that is just slightly tilted from being edge on. The tilt is enough that some hints of detail can be seen yet show it has no appreciable central bulge. Some theories say the size of the bulge indicates the size of the supermassive black hole in its core. If true this one must have a quite small supper massive black hole. Can galaxies suffer black hole envy?

The most interesting cluster is located to the northeast of UGC 9128 at the top of my image. It is rather close at 1.75 million light-years and quite large. Some of its members appear to be scattered across my image including one just north of UGC 9128. Many of its members are visible mainly in IR light and too faint to be seen in my image. While my limiting magnitude is 22 and these galaxies are as bright as 18.1 in IR light they don\'t show at all in my deep red insensitive camera. 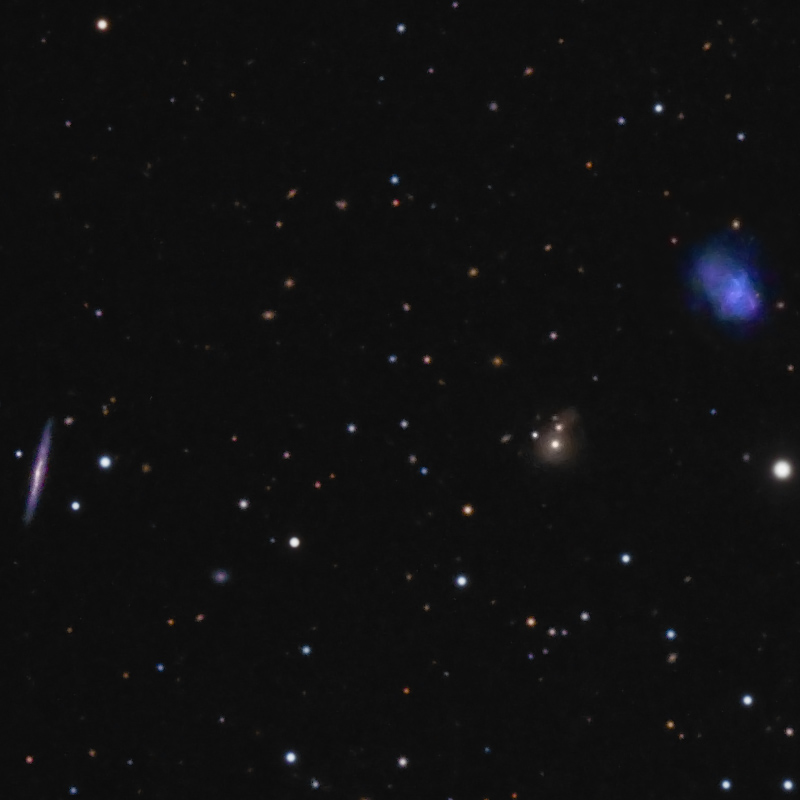 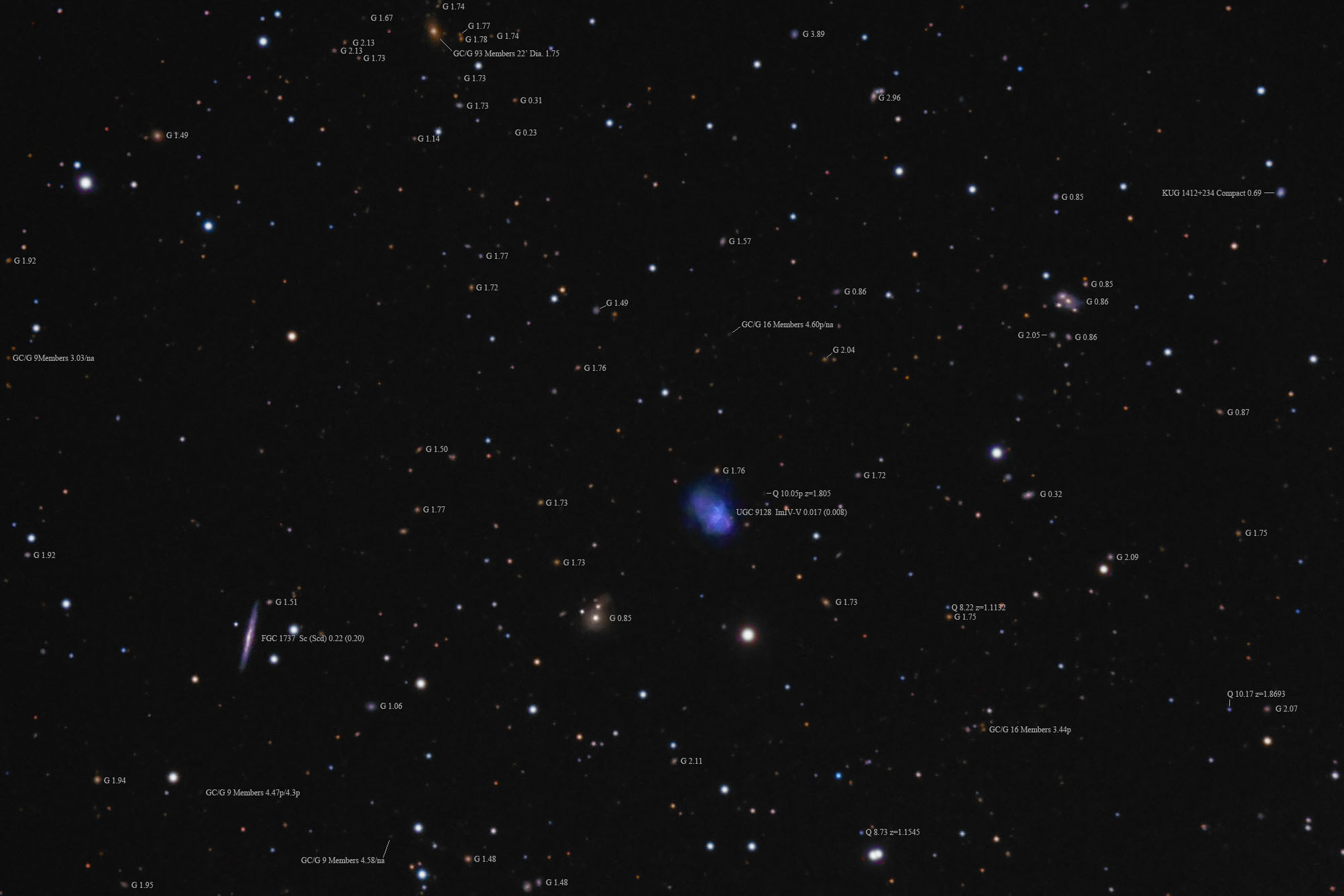 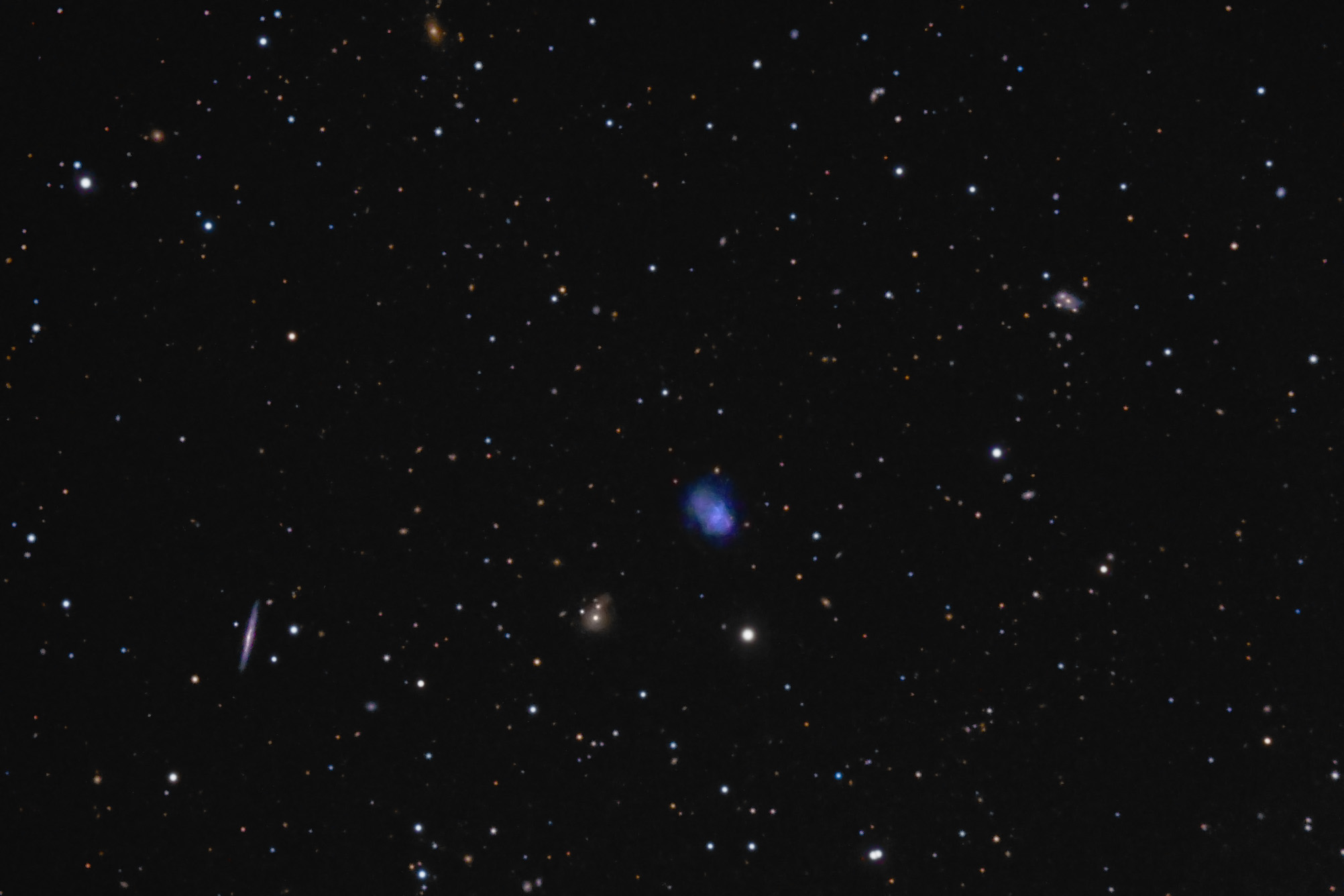