Can a galaxy punt?

UGC 9887 is the strangest member of the ZwCl 1530.9+0454 galaxy cluster. The cluster contains some 211 members in a circle 73\' or arc across, far larger than my field of view (FOV). The middle of the label for the cluster denotes the approximate coordinates of the cluster\'s center according to NED. I say approximate as NED assigns them an error bar of 3.5\' of arc which is about three quarters the length of the label itself. The large S0 galaxy UGC 9886 is considered the bright cluster galaxy for this cluster though it isn\'t at the center. The cluster is a bit over a half billion light-years from us in the constellation of Serpens Caput.

UGC 9887 is classed by NED simply as S for spiral. It is a very strange spiral. I\'ve never seen one that looks like a stick man punting a football before. It appears disrupted with two very weird arms on the south side and only a straight stub on the north side. How Arp missed putting it in his atlas I will never understand. It would fit in the three arm category, as well as the category for spirals with companions on their arm. In this case, the companion is a very tiny (about 7,000 lightyears across) dense galaxy. Thanks to the disruption or whatever is going on, the distance across the galaxy is about 175,000 light-years. That is very large for a single spiral. Though larger ones exist.

Below UGC 9887 and near this compact orange object is a faint round blue smudge that has a slightly red object to the lower left side still within the 11\" circle of mottled fuzz. This brighter patch, as well as one of the mottled areas, are listed by the Sloan Survey as two galaxies. It doesn\'t mention the other faint brighter areas. There is no redshift for either. Are they one object, two or more? Do they have anything do do with how UGC 9887 looks today? I wasn\'t able to find any hint of an answer. It\'s just one of a zillion minor puzzles awaiting time and money to solve them.

While the vast majority of galaxies I found a redshift for are members of the cluster, there are several pairs and triples at other distances. There\'s one quasar in the image that is closer than a distant galaxy cluster in the image. The quasar is also listed as a Seyfert 1 galaxy. 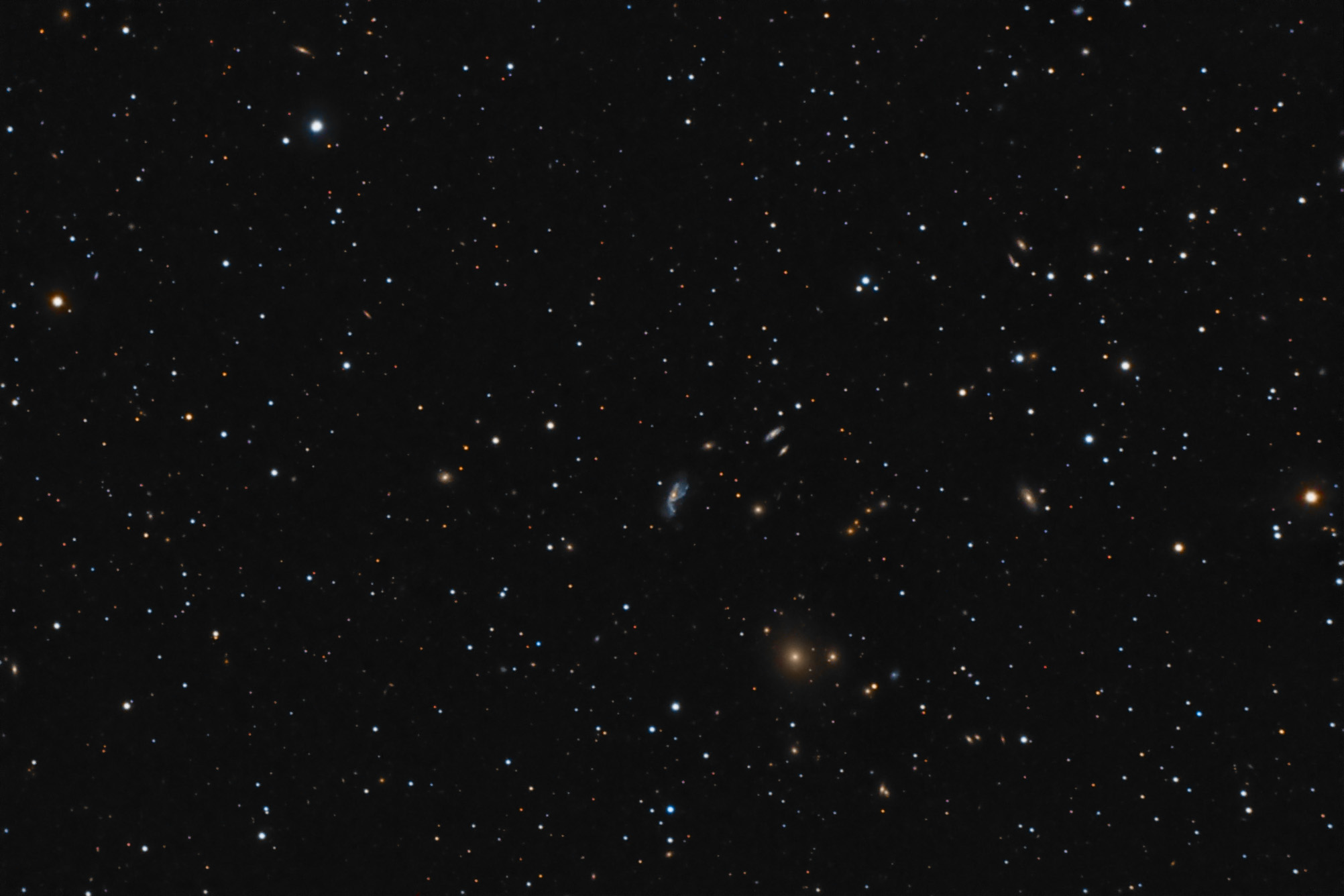 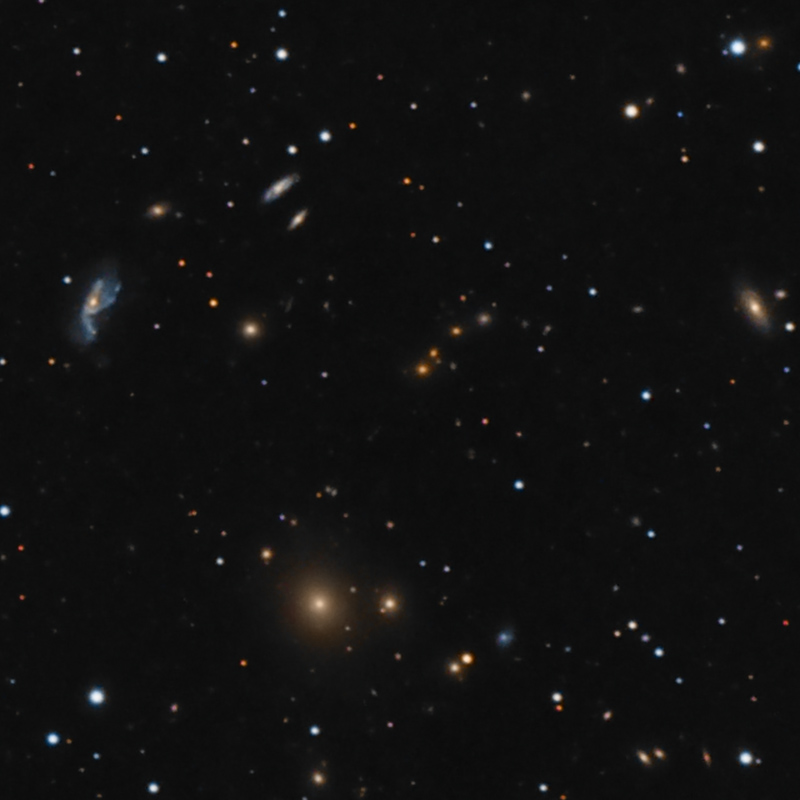 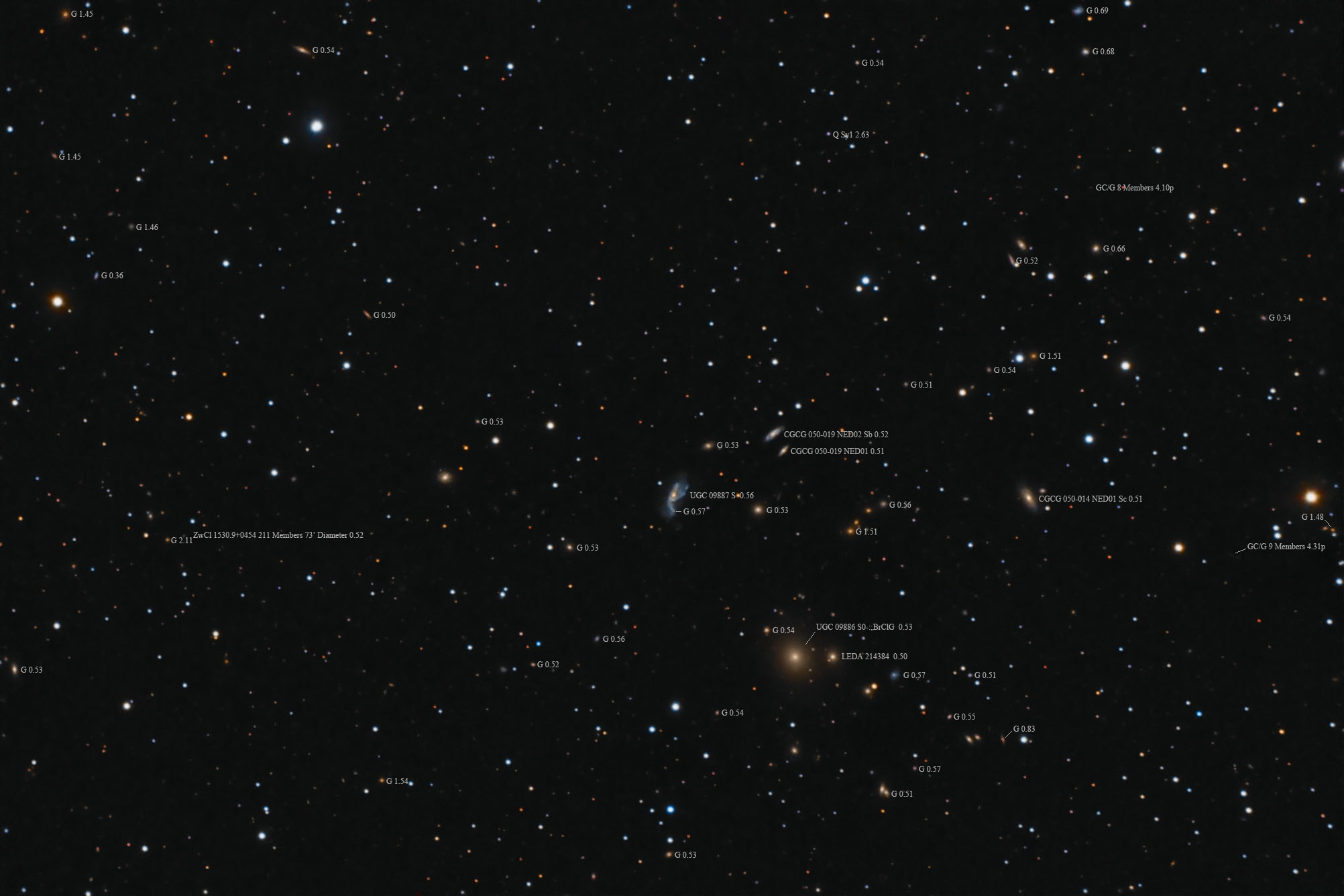