UGC 10923 is a pair of interacting spiral galaxies just over 3 degrees from the pole and about 360 million light-years distant. That means you can image these all night any night if the pole is sufficiently high at your latitude. It does require a really good polar alignment, however. Imaging it, however, has another hurdle, at least for me, Delta Ursa Minoris 14 minutes of arc to the southeast. It sent a very bright gradient across the image. This had a high ADU level such that I might as well have been imaging from a red zone. My normal 40 minutes of luminance wasn\'t enough under these severe conditions so the image doesn\'t go as deep as I would have liked.

Trying to find information on this pair I came across a rather odd paper I can\'t quite fathom. The first and newest note for the pair starts out: \"UGC 10923=Mrk 1116 is a multiple system with an interacting companion only 15\" to the northeast of the main component. The DSS frame shows an apparent bridge connecting these components to a compact object 20\" to the northwest. Another galaxy lies 50\" to the southeast.\" Three galaxies mentioned plus a \"compact object\" that is obviously just a star. Assuming the large spiral is the \"main component\" another is 15\" to the northeast by this paper. That is the position of the end of the lower fork in the upper arm. 20\" to the northwest is a star and the distance I get is 18\". It doesn\'t even mention the other component spiral 45\" to the southeast. OK, it does but puts it 50\" to the southeast further than it really is.

This pair is so poorly imaged I found only 1 color image of it and that was narrowband so the colors are rather odd. It does show the cores of both are very high in H alpha emission. This image was the first light image of the world\'s largest telescope the Gran Telescopio Canarias (GTC) 10.4 meter telescope. So it must be a really great image compared to mine. OK, it shows more detail, they have a lot better seeing than I do and a much longer focal length. But being narrowband and all of 50 seconds total image time mine goes deeper! But then I needed 40 minutes luminance, not 50 seconds. But then I suspect my system was more than a tad cheaper. Odd they picked this to be \"first light\". http://backreaction.blogspot.com/2007/07/first-light-for-gran-telescopio.html

Being this far north there\'s little information on the field. I\'ve noted the few galaxies with redshift data and one flat galaxy from the 2 micron survey without redshift data.

Did I ever mention I hate bright stars? What a pain they can be. 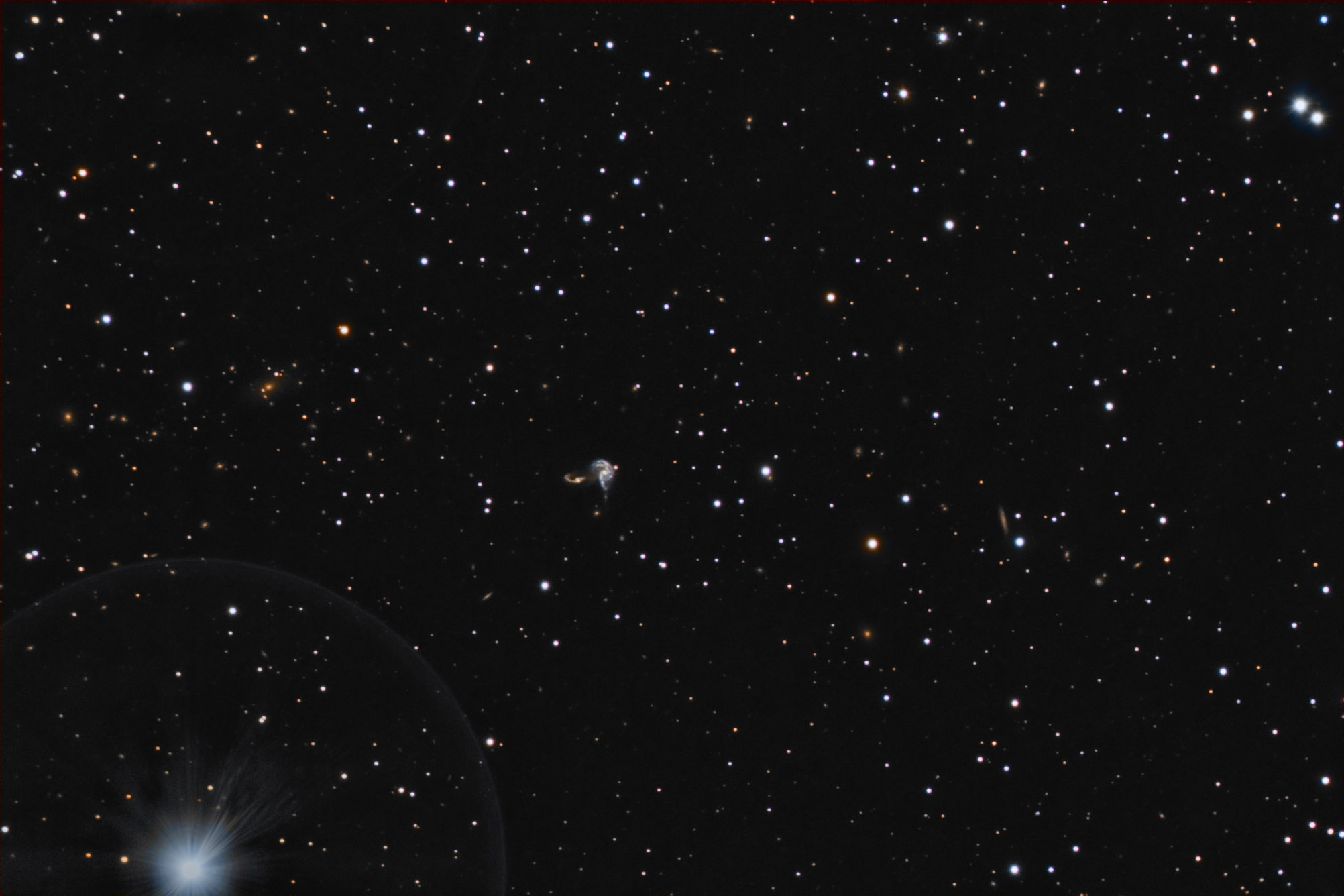 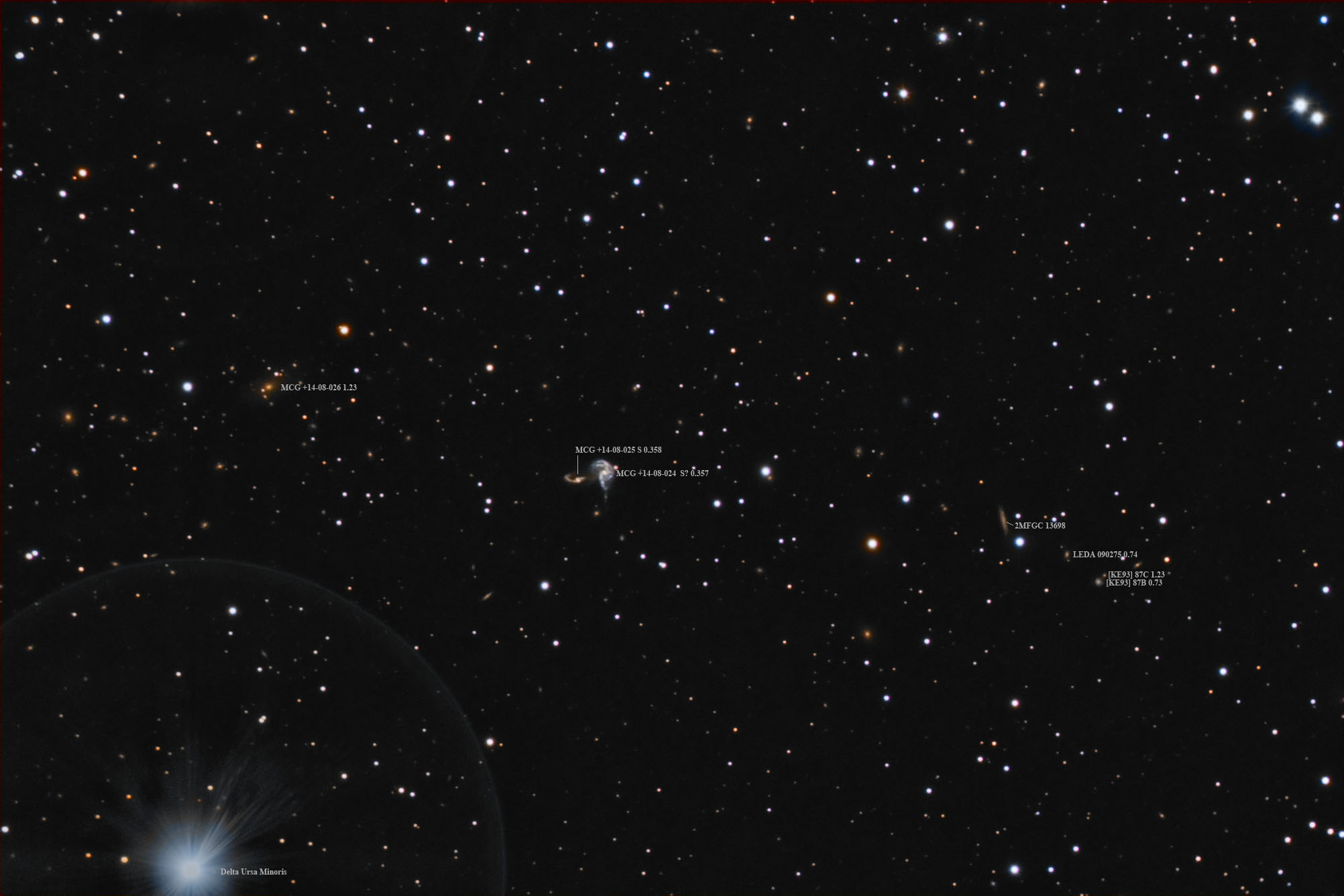 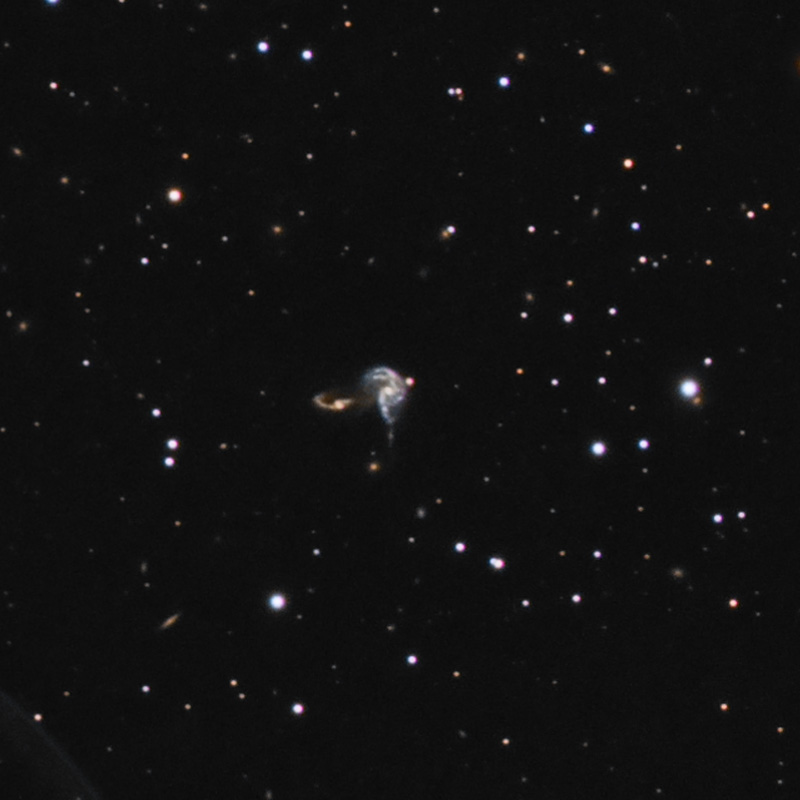