VII Zw 466 is an empty ring galaxy about 650 million light-years away in the tail of Draco. It is 4.6 minutes north of NGC 4613, another type of ring galaxy. VII Zw 466 is what is called an \"empty ring galaxy\" since it consists only of a ring with no core. These are thought to be due to a direct hit by a high speed small but massive galaxy. Could it be one of the three galaxies also named VII Zw 467 to its east? Two are known to be at about the same redshift and likely distance. The third has no redshift data that I could find. There is a reddish object in the \"empty\" core of VII Zw 466 at the northwest edge. Could this be the core of the galaxy or is it the colliding galaxy? Its position is the one NED uses for VII Zw 466 itself rather than the center of the ring. This could indicate NED considers it at least part of the galaxy. For now, I\'ll say it is most likely the remains of the galaxy\'s core.

Several UvES objects are noted in the annotated image. These are likely quasars. Their identification is by photographic means, not as accurate as using a spectrograph. Distance is less certain as well.

NGC 4513 is much closer at 110 million light years. It has an interesting mostly disconnected faint diffuse ring. It is classed as (R)SA0^0^ at NED and S0 at the NGC project. It was discovered by Heinrich d\'Arrest on October 16, 1866.

There\'s an interesting pair of galaxies to the southwest of NGC 4513 beyond a bright orange star. Only the right member has a redshift measurement. That puts it at the same distance as the VII Zw galaxies. Are the two really close together or is this a line of sight coincidence? Neither looks distorted so I\'ll say they aren\'t close enough to interact. Mostly a guess on my part.

To the east of NGC 4513 I was sure I saw two galaxy clusters but while NED shows the galaxies individually, none with redshift data, it shows no galaxy cluster at those two locations. I\'ve marked them with GC? The upper left one is very faint and looked like noise but it shows on the Sloan image of the area. One is obviously a star in the Sloan\'s higher resolution but the rest appear to be galaxies. Same for the brighter group. I seem to have a need for a slightly larger image area as several clusters were listed just barely beyond my field on all sides. One appears to have some of its galaxies in the frame so I marked it with a line going off-frame. The center is 19 seconds of arc north of the frame\'s edge. It is WHL J123106.8+663229 at 2.3 billion light-years. Look along the top, right of center. 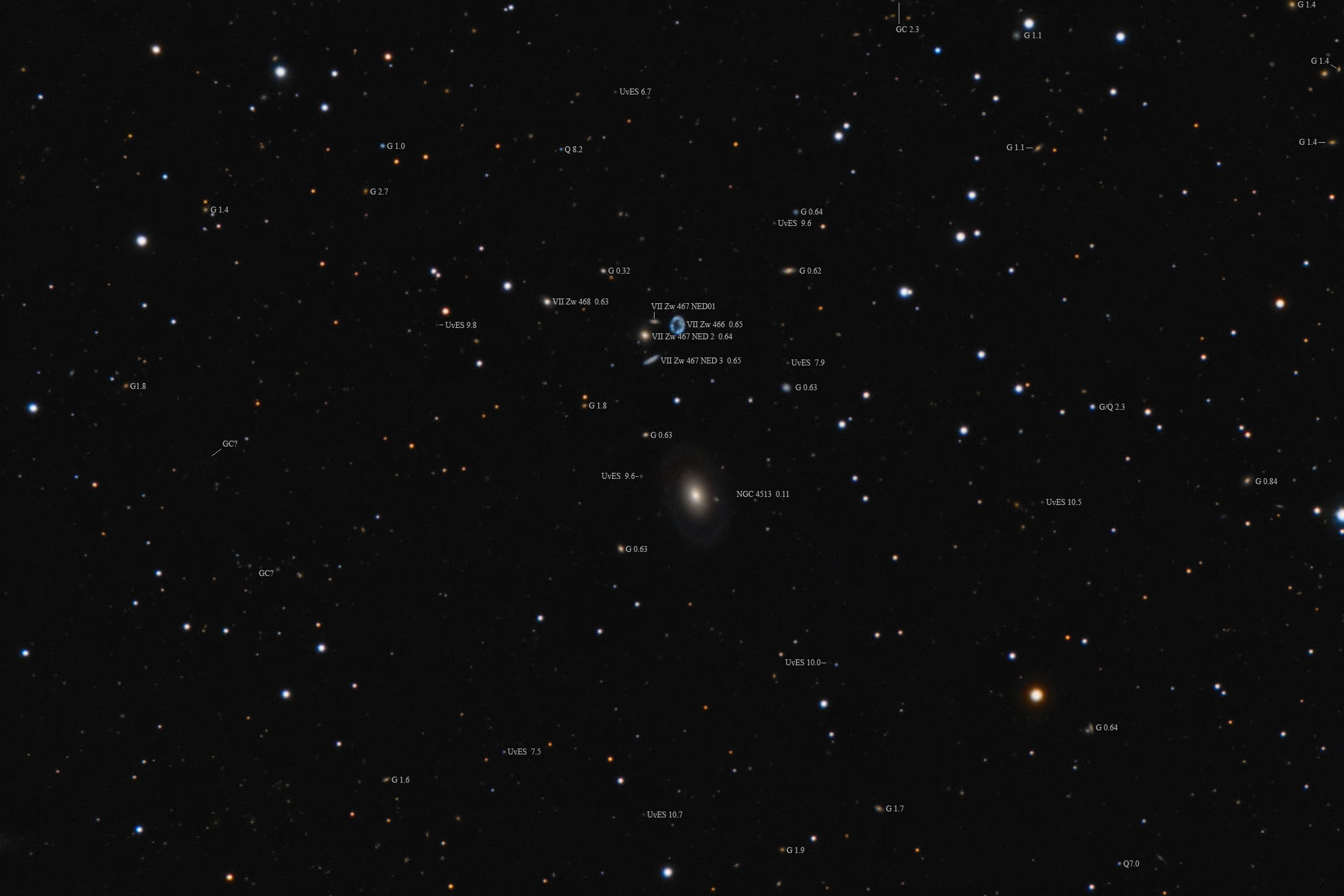 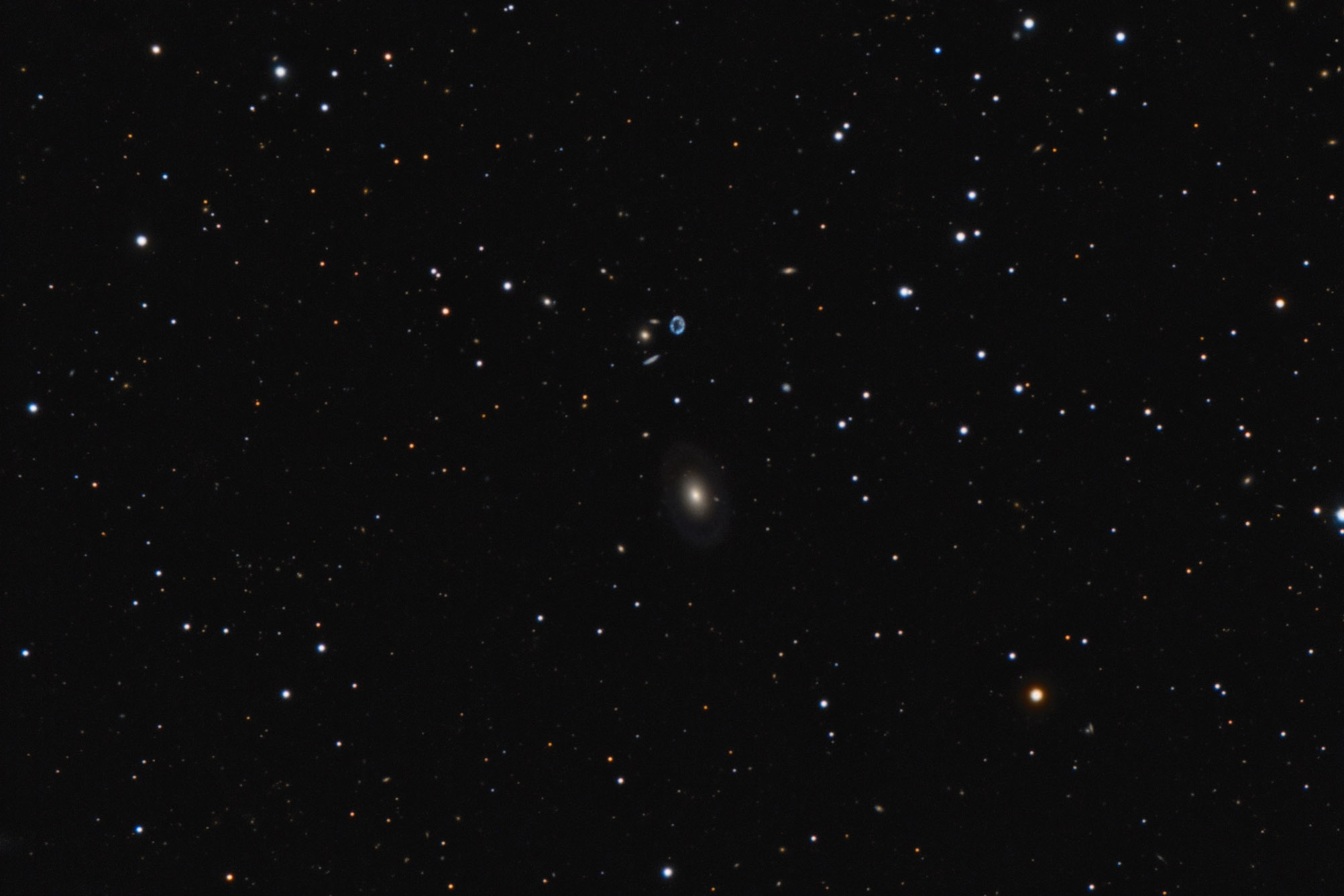 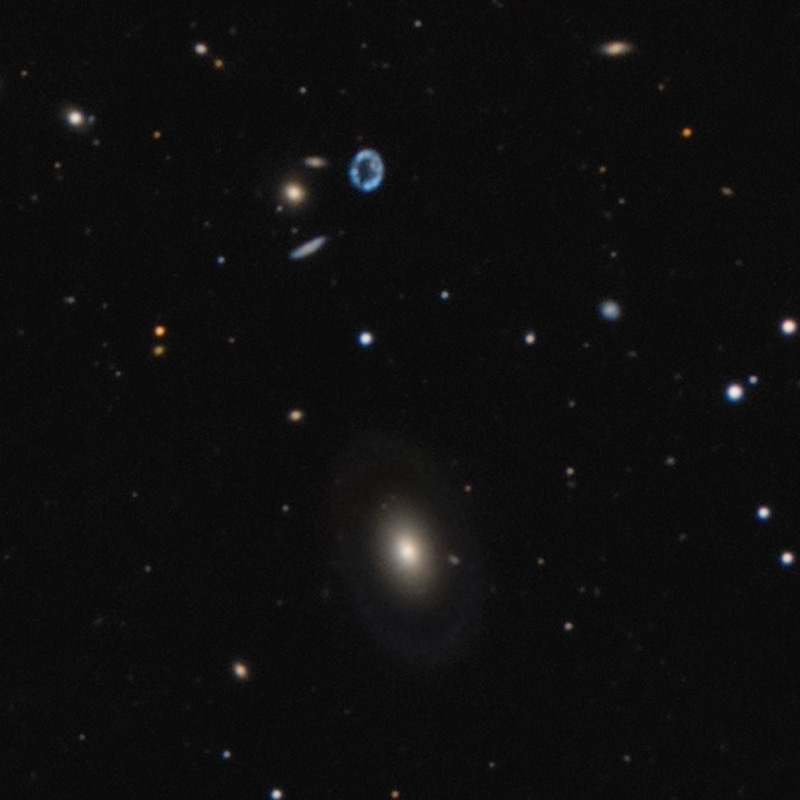