Whiting 1 isn\'t much of a globular cluster. It certainly won\'t win any photogenic awards but it is quite interesting. Most globular clusters are about 10 billion years old, having formed with the galaxy 10 billion years ago. Whiting 1, however, is much younger, probably about 6.5 billion years old. This is possible because it likely didn\'t form in our galaxy. In fact, it is part of what is known as the Sagittarius Dwarf Elliptical Galaxy (SagDEG) also known as the Sagittarius Dwarf Spheroidal Galaxy. This galaxy, or what\'s left of it, was discovered in 1994. It is now mostly a stream of stars representing what was this galaxy before our galaxy began digesting it. In 2002 the star group in my image was discovered, three years later it was shown to be what\'s left of a globular cluster that likely belonged to the SagDEG.

It is about 112,500 light years from our galaxy\'s core and 98,100 light-years from earth according to Hartmut Frommert of SEDS. http://spider.seds.org/spider/MWGC/whiting1.html A paper on this cluster with slightly different values is at http://arxiv.org/abs/astro-ph/0702253 .

Always looking to press the limits of my system I had to go after this cluster in central Cetus. It turns out to be not all that difficult to resolve, at least the brighter stars. I assume the bright stars seen against the cluster are just field stars in our galaxy and not members of the cluster. One of the fainter stars turns out to be a galaxy. It is pointed out in the annotated image. NED has little on most galaxies in the field. I\'ve identified all with redshift information and a few without and only known by coordinates. Quite a few more are listed in NED but since they are only known by their positions and have no redshift data I didn\'t try to list but a very few of them.

Galaxies labeled KISSR are from the Kitt Peak National Observatory International Spectroscopic Survey Red spectral region. Those with an x are candidates according to NED. 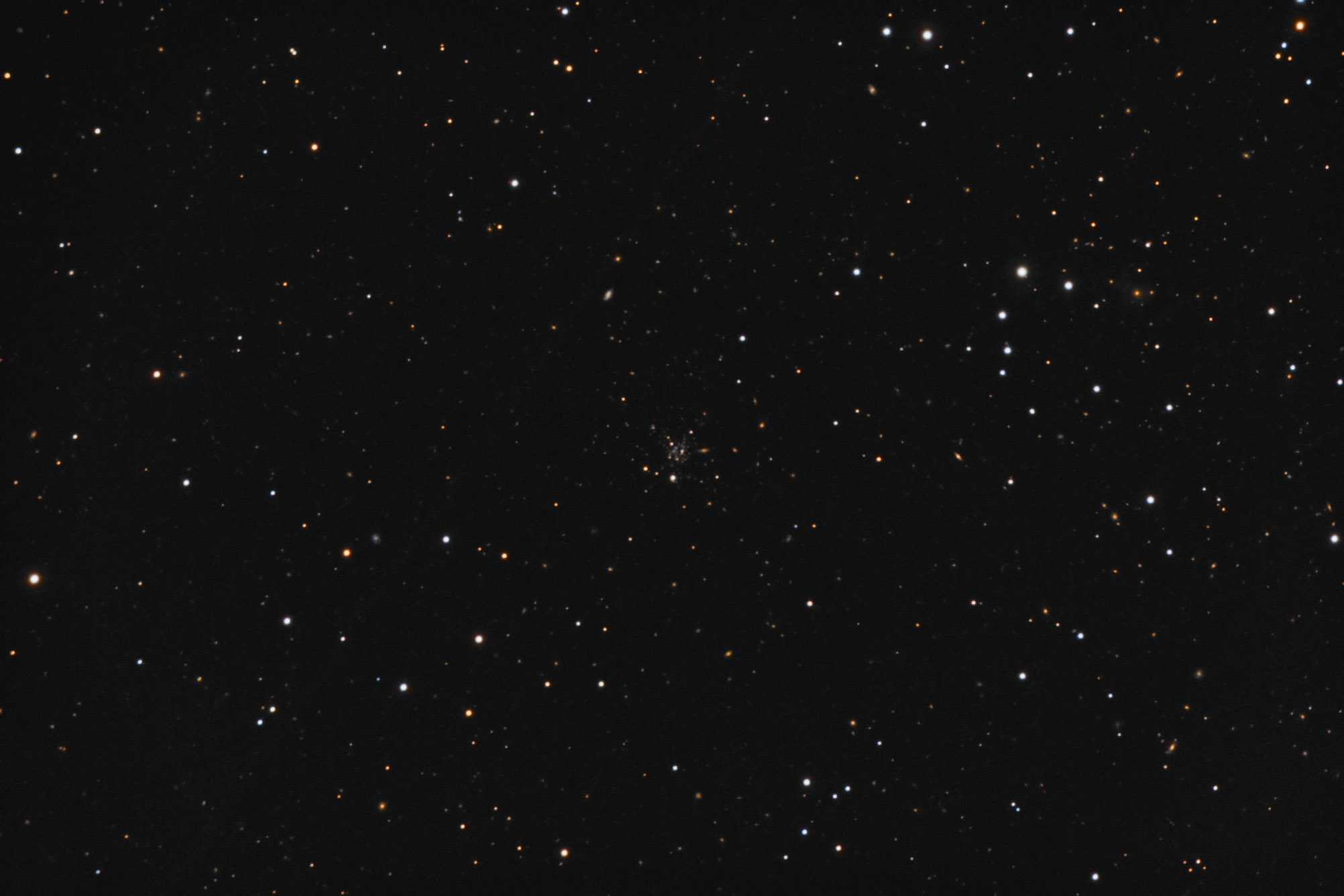 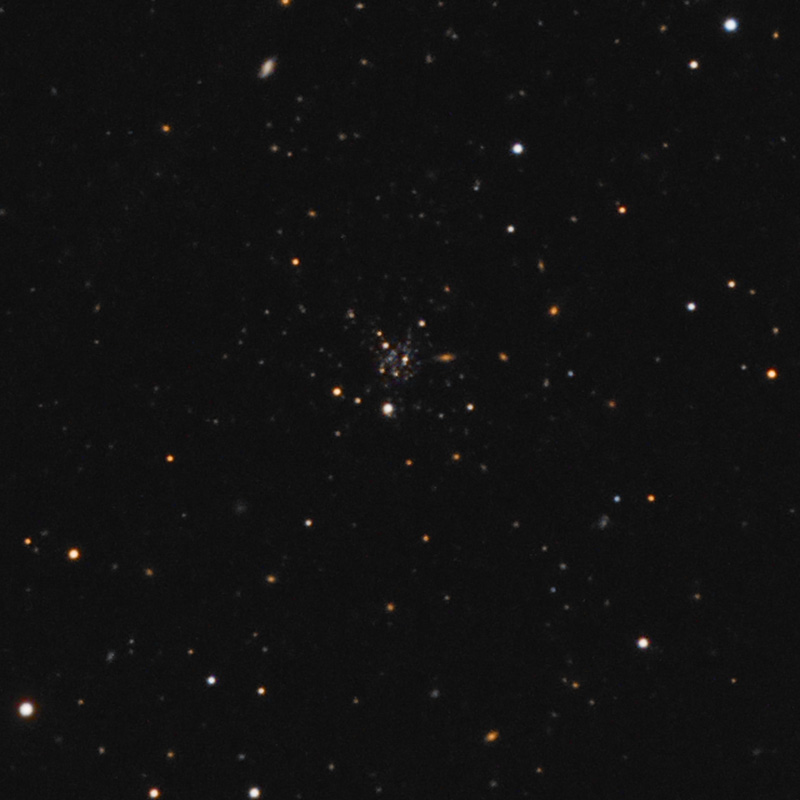 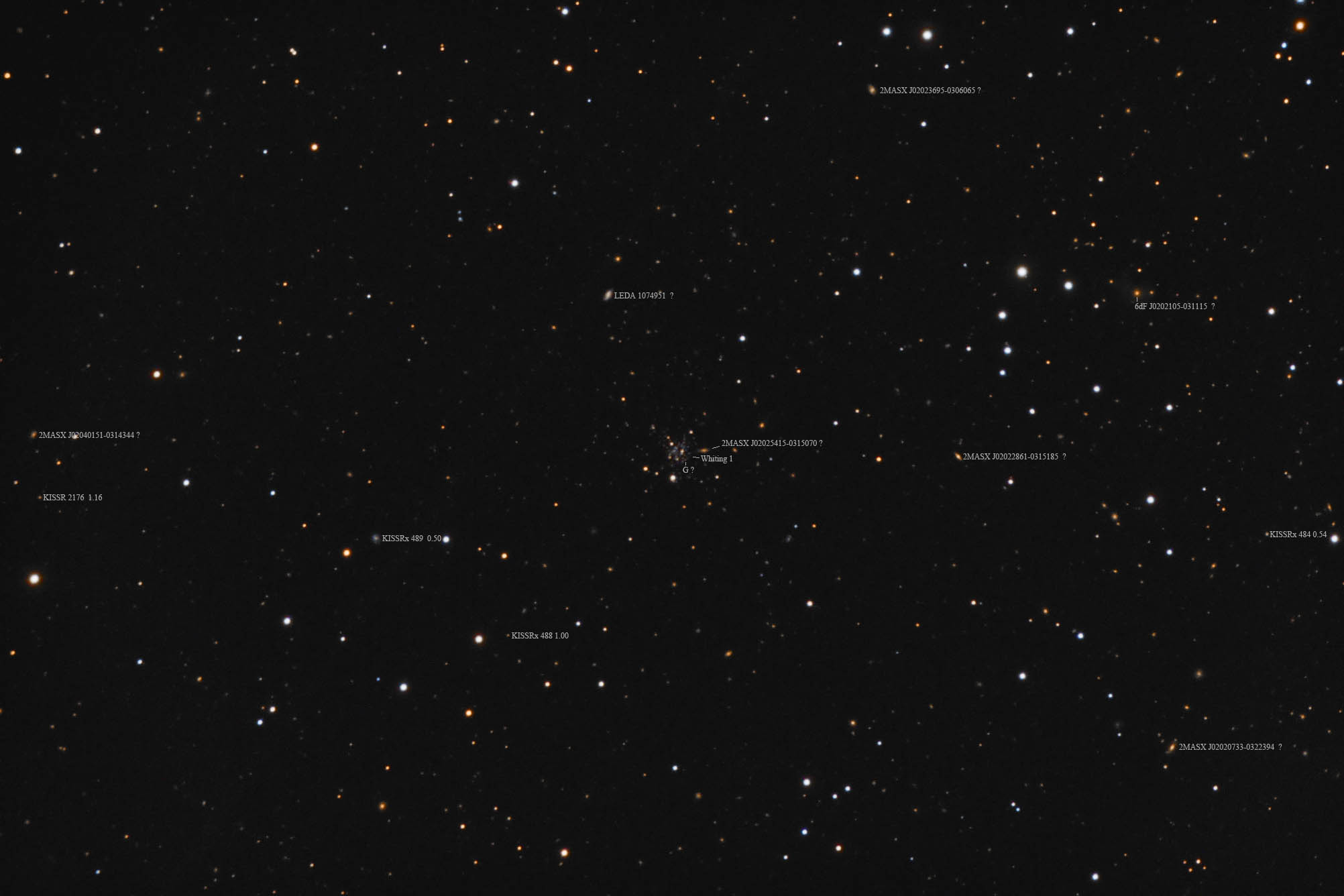